A new exhibition reveals the Tudors’ complicated relationship with Islam

For the better part of a hundred years, the Tudor Room at Mia changed very little. It was the museum’s first period room, and everything about it—the paneling, the furniture, the stained-glass windows—evoked upper-class England in the 1600s. Now, a new tale is unfolding there. “Turkish Rugs on Tudor Walls: 16th-century Trade between England and the Islamic World,” a year-long installation, examines England’s often overlooked relationship with the Ottomans, the Muslim empire to the east. The story is told through textiles, ceramics, spices that were traded, and texts that were circulated—all claiming to represent a veritable message of the empire from which they came or purported to be about.

The project is part of Living Rooms, an initiative to present Mia’s historic interiors and decorative arts collections in new ways. Originally designed to be immersive and instructional, to impart a heritage of good taste to the masses, the period rooms were more artful than accurate. They were beautiful illusions. In the case of the Tudor Room, the illusion of a cozy, insular home has been flipped to tell a larger tale of prejudice and economic anxiety, of a vulnerable England and its more powerful Muslim partner. 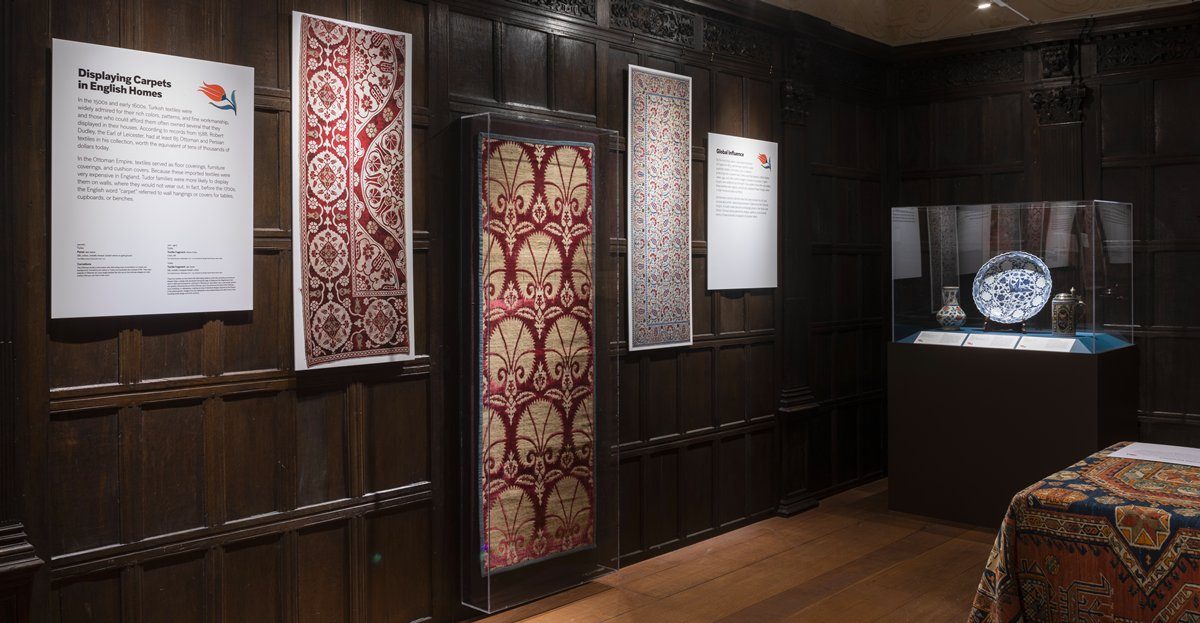 Ottoman textiles hang on the walls of the Tudor Room at Mia as part of a new installation.

Having been cut off from Catholic Europe, Elizabeth I sought to stabilize the economy of her Protestant country by forging a relationship with the Ottoman Empire, centered in Constantinople (now Istanbul). It was fraught from the start. At the time, the practice of Islam was seen as barbaric and heathen to most Christians in much of Europe, a tension that England tenuously balanced with its economic interests—though not without controversy.

How the English understood the Ottomans tended to depend on their class. The English elite, like the original owners of Mia’s Tudor Room, were often directly involved in trade with the empire or had peripheral access to its knowledge and goods. The lower classes encountered the Ottomans  through popular media—stories or songs or illustrations—and sometimes through domestic objects in the home that were part of their daily lives, a sidelong relationship that nonetheless shaped their attitudes and conceptions about the “Turks” (the over-generalized moniker accorded to anyone from the Ottoman Empire). This material culture operated as agents of this faraway region and its peoples, though many examples in the room illustrate moments when the English missed the message.

Turkish textiles (sometimes called Oriental rugs today) became highly fashionable in England. But well-to-do families would place them on their walls or tables, anywhere but the floor. It was a sign of respect, actually—the English didn’t want to wear them out with walking. In fact, before the 1700s, the English word “carpet” referred to wall hangings or covers for tables, cupboards, or benches. But still, it was a misuse of the maker’s intent.

A more damaging example is the English broadside ballad, leaflets that contained popular songs. They often recounted tall tales or frivolous rhymes, and were heard and sold throughout the streets of London. A ballad now featured in the Tudor Room gives an account of a battle between English and Ottoman ships. The story and accompanying woodblock print describe a triumphal victory over the “Turks” despite the fact that this was, well, not at all accurate. The pervasive message, of course, was that the “Turks” were a partner in trade, yes, but also a threat not to be trusted.

“Turkish Rugs on Tudor Walls: 16th century trade between England and the Islamic World” is now on view on the third floor of Mia, in gallery G325.