How we created a playlist for “Artists Respond,” an exhibition of Vietnam War-era art

The Vietnam War, which ended 44 years ago, may seem long ago and far away. But the damage remains acute: more than 58,000 Americans and an estimated 3 million Vietnamese dead, hundreds of thousands wounded, and a shattered faith in the United States government. In the end, after decades of trying to keep Vietnam from uniting under Communism, it was the U.S. that wound up divided.

History, the harsh teacher that it is, has provided lessons if not a salve. But music remains central to understanding the American experience of the war, with its anger, confusion, love, and loss. The soundtrack of the war was a common thread, woven into the cultural consciousness on the front lines and at home, a vibrant tapestry that offered different meanings to different groups.

For “Artists Respond: American Art and the Vietnam War, 1965–1975,” a major exhibition of art from the era now on view at the Minneapolis Institute of Art, putting together a Spotify playlist for the show felt both mandatory and complicated. 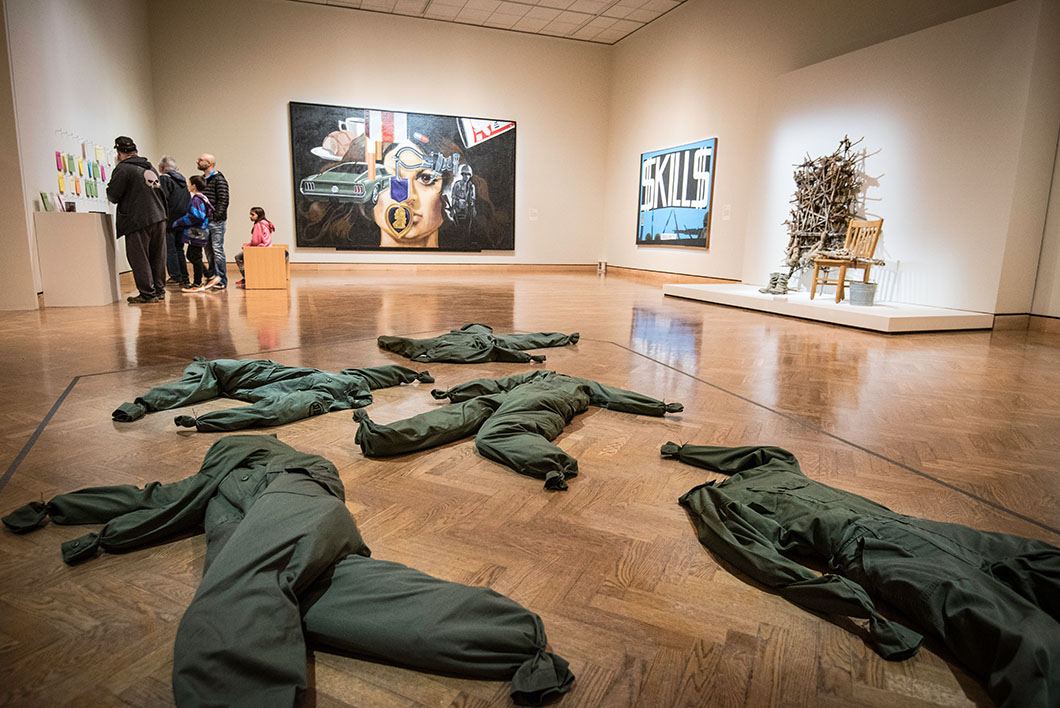 A view of “Artists Respond” in the galleries at the Minneapolis Institute of Art.

Music responds. To the people, the public, the powers that be. It is the ear of the public. Music mobilized the anti-war movement. On college campuses, music helped Americans process their reactions and act on them.

Abroad, music was survival. By 1969, as Meredith H. Lair notes in her book Armed With Abundance: Consumerism & Soldiering in the Vietnam War, more than a third of American troops listened to the radio at least five hours a day. For GIs between 17 and 20, that number was 50 percent. In 1969 and ’70, Lair writes, servicemembers bought nearly 500,000 radios, 178,000 reel-to-reel decks, and 220,000 cassette recorders.

In a sense, music was a way for Americans in Vietnam to get back home from the war, one song at a time.

Part of the power of Vietnam War-era music was its connection to the fight for civil rights. Since the 1950s, young men and women in the black freedom movement were calling for freedom to encircle the oppressed people. Artists in the Mia playlist, like Bob Dylan and Nina Simone, used their talents to chronicle the tragedies of violence in the South, making for an easy transition to create music around the tragedies of war in Vietnam.

However, if you believe that Vietnam-era music was only protest music, you would be wrong. The Mia playlist covers the gamut of the 1960s and ’70s, from protest songs to apolitical tunes to military music, a portrait of the era as multifaceted and not divorced from the culture war raging on the home front.

The aim is to highlight the connections between different people, places and perspectives, with the impetus of creating social significance through song.

Esther Callahan is a Curatorial Affairs Fellow at the Minneapolis Institute of Art.