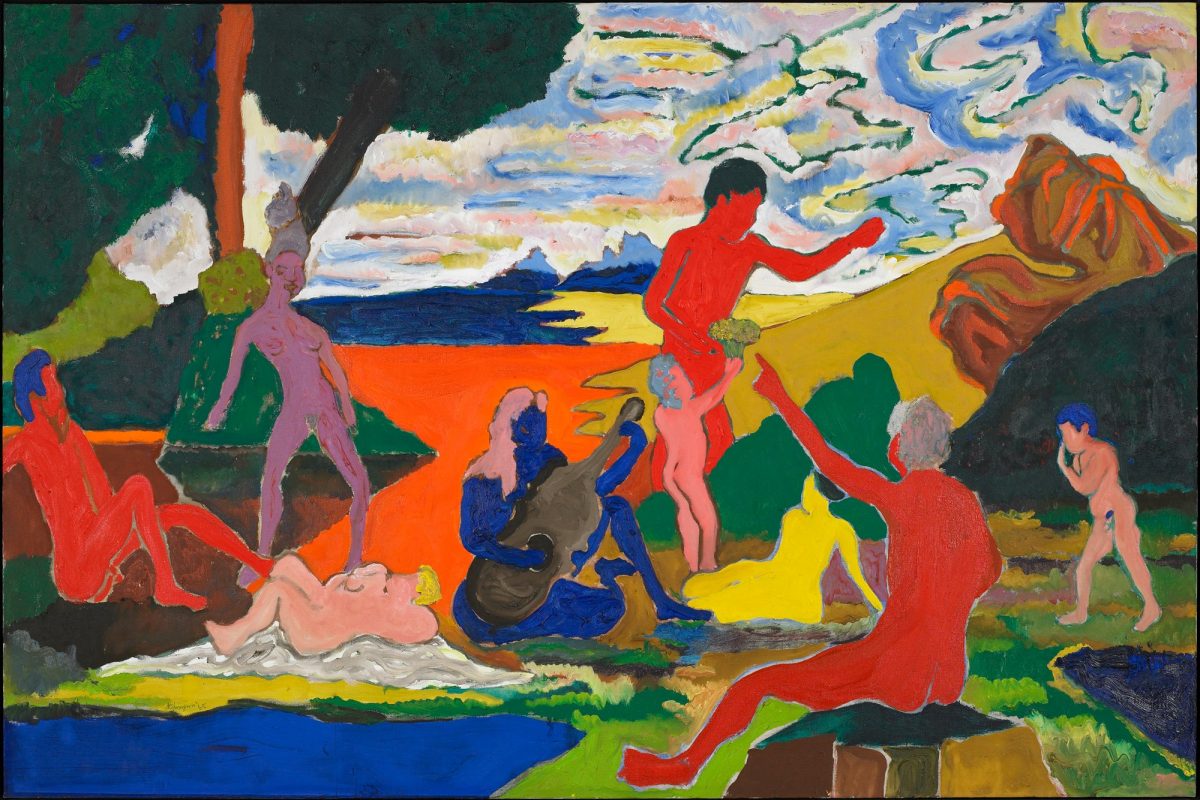 When he was 18, Bob Thompson thought he would go to medical school, become a doctor. Because his mother, who was a teacher, wanted this for her son. And because his father had died, and he was depressed and living in Boston with his sister and didn’t have any better ideas for moving forward. So in 1955 he enrolled in a pre-med program at Boston University.

By the next year, he was an art student. Pre-med had bored him, so he leapt to the next thing, as he would for the rest of his short life. By the time he was 22, he had his first solo art show in New York. Bob Thompson in his Manhattan studio from the Archives of American Art, Smithsonian Institution, Washington, D.C.

A look at Thompson’s meteoric career is now up in gallery G275 at Mia, in the context of the Baroque art that inspired him and the work of fellow African-American painter Beauford Delaney. Thompson was one of the few artists that collector Myron Kunin had more than one painting from, and it’s easy to see what caught Kunin’s eye. Thompson held nothing back. His “riffing,” as he called it, on historic paintings, his shifting techniques, his spontaneous approach, it’s all there on the walls, as curious and colorful as Thompson himself.

“I paint many paintings that tell me slowly that I have something inside of me that is just bursting, twisting, sticking, spilling over to get out,” Thompson once said. “Out into souls and mouths and eyes that have never seen before.”

Thompson spoke the language of jazz, of riffing and improvisation. He played drums, and in New York he befriended bass player Charlie Haden, saxophonist Ornette Coleman, and other experimental musicians spearheading the “free jazz” movement. He knew writers like Allen Ginsberg, too, and by the late 1950s he was attending some of the first “happenings,” in which artists of all kinds would perform spontaneously with the participation of the audience.

Thompson was a bohemian, in other words. But he had a thing for Renaissance and Baroque art, and when he moved to France in 1961 it was to study these works at the Louvre museum in Paris and elsewhere. In art school, he had begun to copy the paintings of Fra Angelico, Piero della Francesca, and other Old Masters, and when he moved to Europe he began to turn them on their head. Bob Thompson’s “The Wind” from 1963. Thompson frequently depicted birds, perhaps as symbols of freedom and the ultimate flight of death.

Several paintings in Mia’s show riff on “bacchanal” paintings of the Baroque era, which not so subtly evoke the sex, drinking, and merriment of myth. (A real Baroque painting, featuring cads and their willing victims, is included as context.) One of them, Homage to Nina Simone, shows nude men, women, and children grooving to music in an idyllic, park-like landscape—a twist on Nicolas Poussin’s painting Bacchanal with Lute-Player, from around 1630, which Thompson had seen in the Louvre.

Thompson had been on a tear, returning to New York with a huge trove of paintings like this, which established him as a kind of genre unto himself: the black artist who deconstructed old white art for a hipper, groovier time. Like Jean-Michel Basquiat in the 1980s, his talents broke barriers even as they enabled his vices. The charms of the art world—money, fame, drugs—were held out to him, and he turned none of it away. He loved to party. He had a heroin addiction. He lived fast, and died fast.

Thompson painted his tribute to Nina Simone, the talented and tragically unstable singer and pianist, in 1965. The following spring, in Rome, he overdosed on heroin and died. He was 28.

He had returned to Europe ostensibly to slow down, clean up. But after emergency gall bladder surgery, in March 1966, Thompson had quickly resumed his old habits. He was dead three months later.

He had produced more than a thousand paintings in just a few years, more than three times as many as Rembrandt and perhaps 30 times more than Vermeer managed. But he is almost forgotten now, outside of connoisseur circles. His work and its visceral appeal suggest he knew that we live in our flesh, among the pleasures and pain it affords us, and we die there, too. He might be disappointed that he is not around—to paint more, to burnish his legacy—but not surprised.

Top image: Bob Thompson’s 1965 painting “Homage to Nina Simone,” in the Myron Kunin collection at the Minneapolis Institute of Art.