The kitchen dance: Watch an ode to women, work, and Mia’s modern masterpiece

The Frankfurt Kitchen is an icon of modernist domestic architecture, a 75-square-foot ode to efficiency. It was designed in 1926, by Austrian architect Margarete Schütte-Lihotzky, as an attempt to simplify the chores of cooking and cleaning up afterward, freeing women—whose chores they were and largely remain—to pursue their own economic and personal interests. Schütte-Lihotzky came up with the design after interviewing women, documenting their movements in the kitchen, and consulting time-motion studies to determine where to keep items within easy reach and simplify tasks like peeling potatoes. Once the template was set, some 10,000 units were built in the late 1920s in Frankfurt, including one that has been in the collection of Mia since 2004. 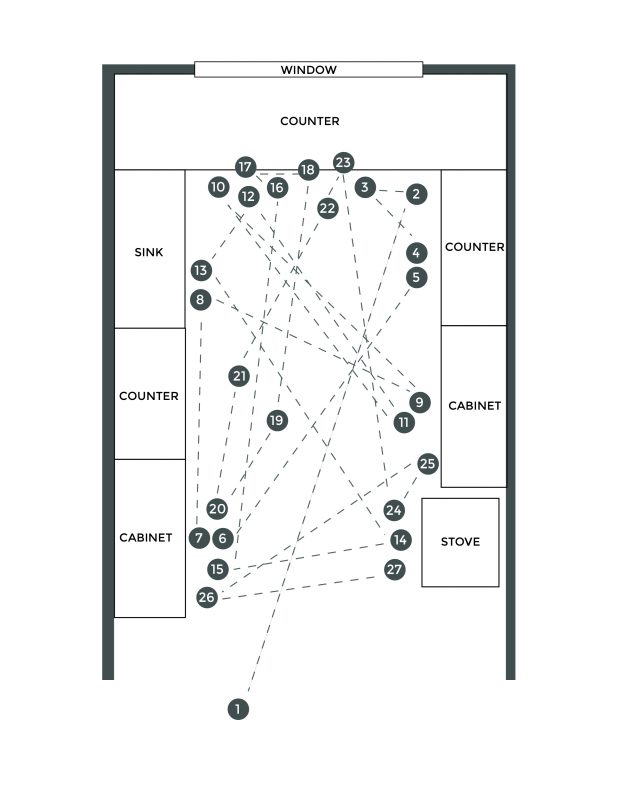 The dance steps for Kitchen Dance. Choreography by Zoé Henrot.

Inspired by the women for whom it was designed, Minneapolis-based filmmaker Maribeth Romslo used a 2019 grant from the Minnesota State Arts Board to produce a conceptual short film set in a simulacrum of Mia’s Frankfurt Kitchen. Romslo is a volunteer with Art Adventure, a Mia program that brings art education into elementary school classrooms. She worked with Tom Burgess, who is on the theater faculty at Normandale Community College, to build a set that mirrored the kitchen but that also functioned as a stage. Choreographed by Zoé Henrot, artistic director of Ballet Co.Laboratory, six dancers—including Henrot—energized the space in surprising ways, performing to an original score by Jimmy Stofer.

The result is Kitchen Dance, an almost eight-minute film that explores the complex societal and personal demands women face today at home and in the workplace. Inherent in that tension are friction and pressure. As women gain more rights (then and now), are they really just expanding their to-do list—spinning ever more plates? Kitchen Dance conveys that push-pull.

You can see the entire film at Maribeth Romslo’s Kitchen Dance website.

What inspired you to make this film?

Because I love art, and I love volunteering for Art Adventure. I had walked by the Frankfurt Kitchen before. Learning about the origins of it, the intentions of it, to give women more efficiency within their work, it struck a chord with me. I was like, why don’t we do some sort of dance in the kitchen?

What story does your film tell?

It’s not just a pretty film of dancers in a kitchen. The kitchen was designed at a time when women’s roles were changing. One hundred years ago [women] gained the right to vote in the U.S. But we’re still struggling with spinning all the plates, bouncing all the balls. Whatever metaphor you want. We’re still struggling for equal pay, [recognition of] the invisible work of women at home. I was inspired by this woman [Schütte-Lihotzky] who, through design, wanted to give women more freedom, more agency.

What artistic constraints did you face?

For me, not many. I felt very fortunate to have so many amazing collaborators. I had an arts board grant to fund it. I found a builder to build the set. Personally, I had never shot with an anamorphic lens; it’s a little touchier in terms of soft focus. But the dancers felt a ton of constraint. They’re not used to dancing in a 9 by 12 space.

Did you craft a narrative?

Yes, there was a loose script that says what [the dancers] do. They notice the water drip. They get the pot. But then they each have their own little chapter. Within that push-pull theme idea: when do you feel grounded and when do you soar? Play versus responsibility. Holding on and letting go. Pain and pleasure. Contentment and drive. Grief and peace.

It was surprising how much I learned in the edit. The six dancers all danced on their own in the kitchen. It was very different from an edit for continuity. It had to be so intentional and seamless.

What do you want viewers to take away from your film?

There’s some deep thinking: what role do women play in society and in their lives? How have important women in your life shaped your life? What dances have they done, metaphorical or literal? I wanted to show off the kitchen as a character. By going to these different vantage points, it allowed us to see the kitchen by different angles. I loved the overhead view. It was like the kitchen was watching [the dancers]. 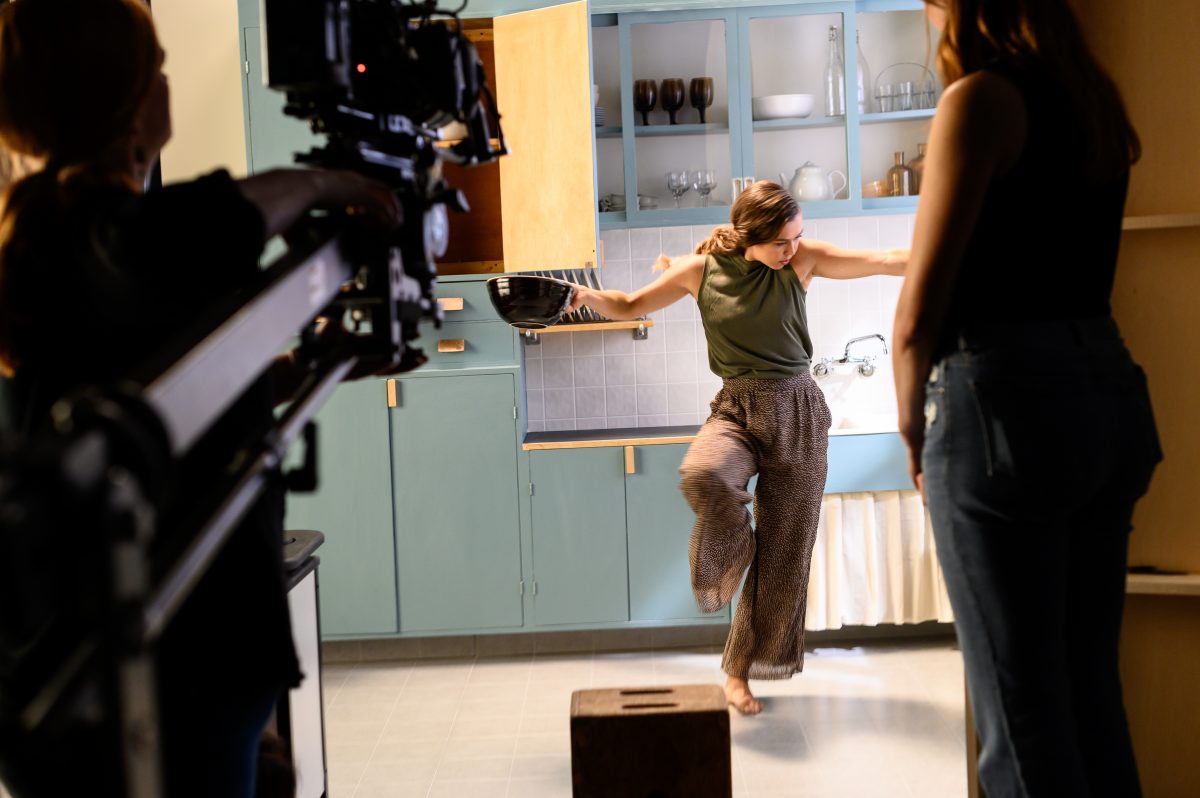 Tom Burgess, in the theater department of Normandale Community College, was “a project angel,” Romslo said. Working with Mia staff, he documented the Frankfurt Kitchen inch by inch with a measuring tape and sketchbook. “Tom solved all these problems with a set build but being true to what it was,” she said. “The faucet ran real water.”

Had you ever seen the Frankfurt Kitchen before?

I think I’d walked past it a few times. I love [the museum], but the area I gravitate toward is the Japanese rooms.

How did your students get involved?

I spoke to my colleagues in the Normandale theater department. I asked if they’d be cool if we filmed it there, after building the set. Maribeth met with our film and TV classes and allowed them to sit in while they filmed. We were able to make it an educational experience.

What challenges did you encounter?

The biggest challenge were the spice holders. The aluminum tray handles that you pull out. My former colleague Rick Polenek is a props person in theater. He created those aluminum-handled spice doors with rubber hose and cardboard.

How hard was it to match the blue paint?

It was crazy hard. We had to paint it twice. The second time it was much closer, but it wasn’t exactly the same. So much has to do with the lighting. LED is tough. In the theater we have Tungsten lighting. In the store, you’re under fluorescent lighting. But as far as the final project, it reads great.

Did the project teach you anything?

The craftsmanship [of the Frankfurt Kitchen] is amazing. It’s a pre-automated construction process. There are tongue-and-groove joints. It’s handmade. You can see chisel marks, indications that these are made by a human, not a machine. It’s super well designed and efficient. I had to try to figure out how to reproduce it so it would look good for the camera but not cost so much. The camera picks up every little detail and mistake.

What theater tricks did you use?

I was acutely aware that [Maribeth] would need to have access to her equipment, so I designed it so all three walls could come apart. They could just be unscrewed, and they were all on wheels. The sink came from IKEA, but I hung it backwards. The materials came from a box store. One build challenge: the sliding glass cabinet above the sink. It was made of inexpensive Plexiglas and lumber. I was glad Maribeth used that shot. It was the money shot for me.

What did your students learn during the filming?

As theater educators, we’re all about experiential learning. The students in the scene shop, who helped in the build, learned a lot. Paying attention to that level of detail for film in the build was very beneficial. For the film students, everything was on the space: prop table, lighting. They were there for it all and could see it all. 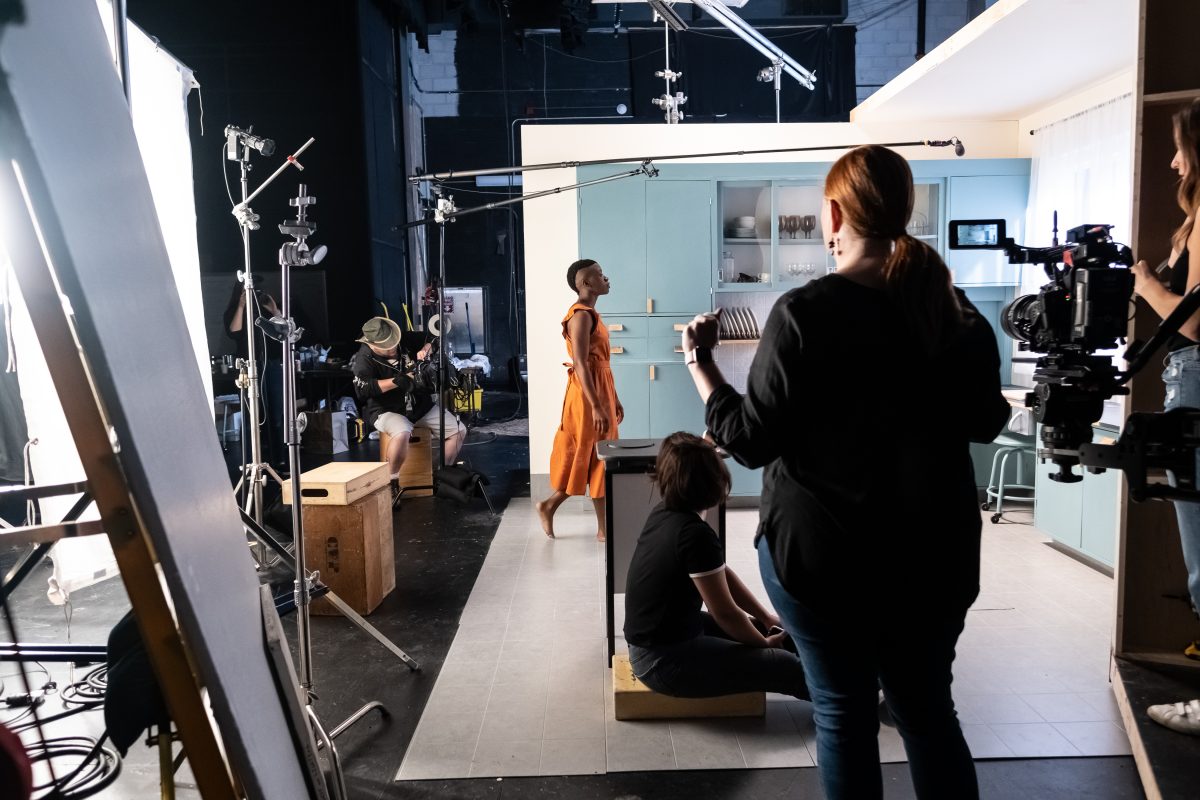 Ballet dancer Zoé Henrot, artistic director of Ballet Co.Laboratory, created modern choreography for the film. The dancers had two days on set; to rehearse, they confined their movements within taped borders on stage. Says Romslo: “I think they wish they had more time in the set. Especially the [dancer] who climbs all over the counters. Her dance really took shape once she got in the kitchen.” Henrot performed the dance that powdered the set in flour.

What did you think when Maribeth approached you?

I loved the concept of celebrating women in kitchens, and thinking about that from a dance perspective. We talked about how we wanted the story of all women, and the singular woman at the same time. I said, “What about different types of dance, too? Then you can really start to dive into how we’re different, but that the kitchen brings us together.”

How did you collect your dancers?

I was looking for divergence, dancers who were not like me. My area is ballet with contemporary movement. I wanted to find movers who didn’t move like that. That’s why I went to Lisa [Berman], my friend who breakdances. She connected me to Jessika [Akpaka], who does hip-hop and African dance. Juliana [Johnson] is a teacher at Ballet CoLaboratory; she did a lot of acrodance: yoga and dance coming together. She’s a unique mover, so I knew she’d bring something different to the project. Yuki [Tokuda], I wanted her to bring in her movement style: Japanese traditional dance forms as well as ballet. Maya Washington added musical theater dance elements. So just adding layers.

How did the dancers create their stories?

Maribeth brought us this script, the recipe we were making. From that, I choreographed what you would call, in theater, the action: you turn over your left shoulder, then you crouch down. It could be unique to you, but it had to be the same [for each dancer]. Maribeth really wanted kitchen movements, like chopping. We exaggerated the elbow, transferred the potato from the left hand to the right hand, in the most specific way ever. We had to be experimental. Once we had our main phrase, we had a particular object to inspire us. I had the flour sifter. I worked with every dancer individually, working in their dance vocabulary, not mine.

What was your biggest challenge?

It was a difficult thing to rehearse. As dancers we’re always so aware of the space around us. Having something so small was definitely a challenge.

What will you think about the Frankfurt Kitchen when you see it next?

I will feel like it’s my kitchen. I was the last take, because I was [sifting] the flour. So after immersing myself in this kitchen, I was like, “I want a kitchen like this.”

These interviews were edited for length and clarity.