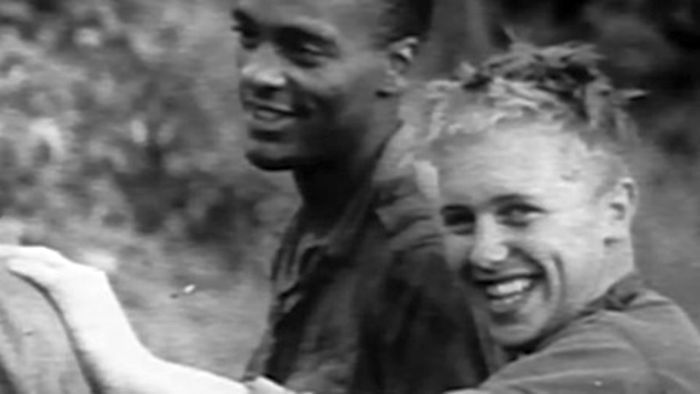 In 1966, documentary filmmaker Pierre Schoendoerffer embedded himself in Vietnam with a platoon of American soldiers, led by Lieutenant Joseph B. Anderson. That documentary, The Anderson Platoon, won the Academy Award for Best Documentary Feature, and gave American audiences one of the first glimpses into the daily experience of the soldiers in war.

Twenty years later, Schoendoerffer travels around the United States to interview some of the film’s original participants. Through the soldiers’ personal narratives, the resulting film is an empathetic portrayal of the complicated reintegration they experienced transitioning to civilian life, the different roads they each took, and the war’s continued impact on them many years later. (60 min; 1989)

A conversation with Lieutenant Joseph B. Anderson follows the film. Screened in conjunction with the “Artists Respond” exhibition.

Anderson is a native of Topeka, Kansas and a 1965 graduate of the United States Military Academy (West Point). During his military career, he served two tours of duty in Vietnam. His awards include two Silver Stars, five Bronze Stars, three Army Commendation, and 11 Air Medals. He resigned his commission after 13 years of service to enter the private sector with General Motors. Anderson is now chairman of TAG Holdings, LLC.