Engineered for Domestic Bliss is the theme of a new installation of objects from Mia’s modernism collection that focuses on appliances made for the home in the decades before and after World War II. Radios penetrated the majority of homes in the 1930s; by 1960 television ownership had grown to 90%. These appliances, and others engineered for keeping house, feeding the family and leisure pursuits, promised lives of efficiency and style to a growing middle class. The exhibition is on view in 20 cases in the ground-floor concourse and skyway levels of the Wells Fargo Center in downtown Minneapolis.

Selected Artworks from the Installation 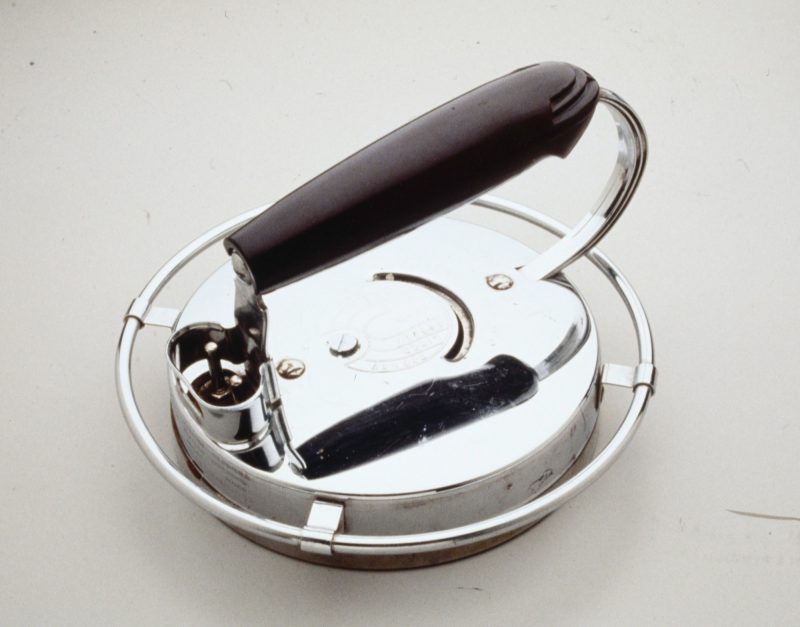 One could argue that Stevens’ Petipoint was the racecar of the ironing world at the time, with its streamlined wings on either side. They actually facilitated air-cooling, keeping the user’s hand and the thermostat area cool. The upswept back portion of the iron is the “petit point” for detailing ruffles and pleats. Knapp-Monarch advertised that its Flatwork Ironer, specially designed for flat linens like sheets and tablecloths, would “cut flatwork ironing time by ⅓.” Its round shape allowed it to move in any direction and it had versatile settings for linen, cotton, wool, silk, and artificial silk. The irony (pun intended) here is that although these appliances performed very well, they often increased the amount of in-home ironing done by housewives, who earlier would have sent linens out for pressing. 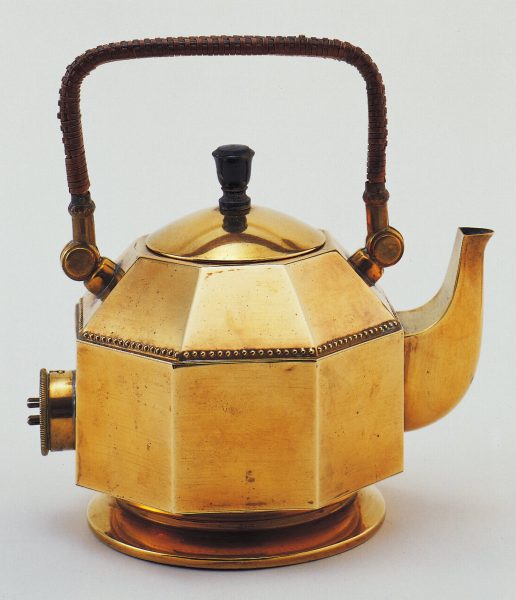 Considered by many to be the first modern industrial designer, Peter Behrens served as artistic adviser to the Berlin General Electrical Company from 1907 to 1914 for which he designed electrical appliances for home use. This electric teakettle was produced in three versions (oval, bulb-shaped, and octagonal). Each was available in three different surface finishes with the heating elements hidden inside. 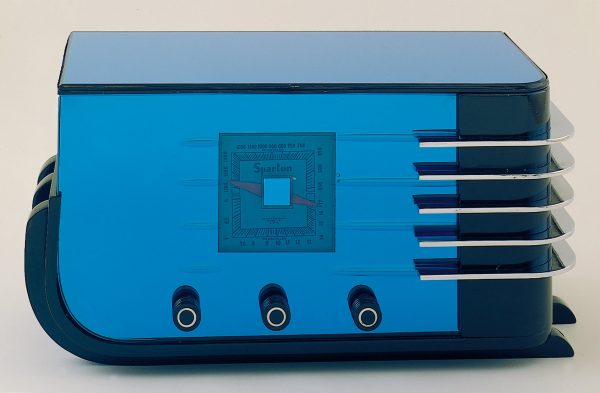 By the middle of the 1930s, radios had become fixtures in two-thirds of American households, bringing news of contemporary events, music and entertainment of all kinds to 85% of the population. This radio was the first of a series of blue-mirrored glass models introduced in the middle of the 1930s by the Sparks-Withington company under the brand name Sparton, a conflation of the company’s name suggestive of rockets, space exploration, and Martians.

The complex profile of this lamp is reminiscent of an engine piston or a modern-day outdoor heat lamp. Before coming to the United States in 1923, Walter von Nessen trained as an architect and designer in Berlin, Germany. There machines and mechanized production were seen as the basis for modern design, and those ideas are reflected in this lamp. He was instrumental in introducing these concepts to the United States. 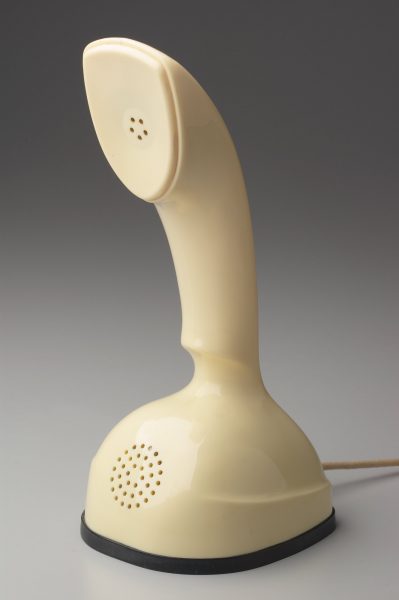 In the early 1930s the Swedish company Ericsson switched from using sheet metal to form the base and handset of the traditional desk telephone to Bakelite, an early form of plastic. Twenty years later, with the availability of new, easily molded plastics, Ericsson’s designers transformed the phone’s appearance, essentially turning the handset by 90 degrees and incorporating the dial in its base. This practical, one-piece model was introduced to North America in 1960 where it was advertised as “the telephone that reflects your good taste.” The sculpted form, nicknamed “the cobra,” was available in 18 colors to complement every interior. 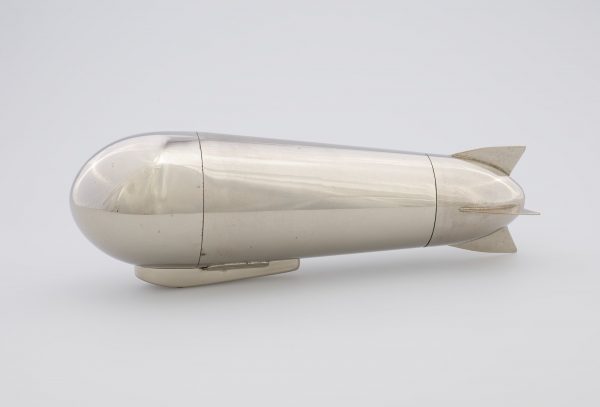 The streamlined form of the Zeppelin airship, served as the model for this most elegant of cocktail shakers. Everything required of the host was contained within the shaker including a flask, strainer/juicer, corkscrew, funnel and four graduated shot cups and spoons. When unscrewed, the tail section became a nut dish.

The responsibility for keeping up appearances within the home fell solidly on the shoulders of women, either wives or housekeepers depending on the means of the traditionally male breadwinner and head of the house. Labor saving devices such as the vacuum cleaner, iron, and washing machine promised efficiency, if not an end to domestic chores entirely, leaving more time for leisure activities. 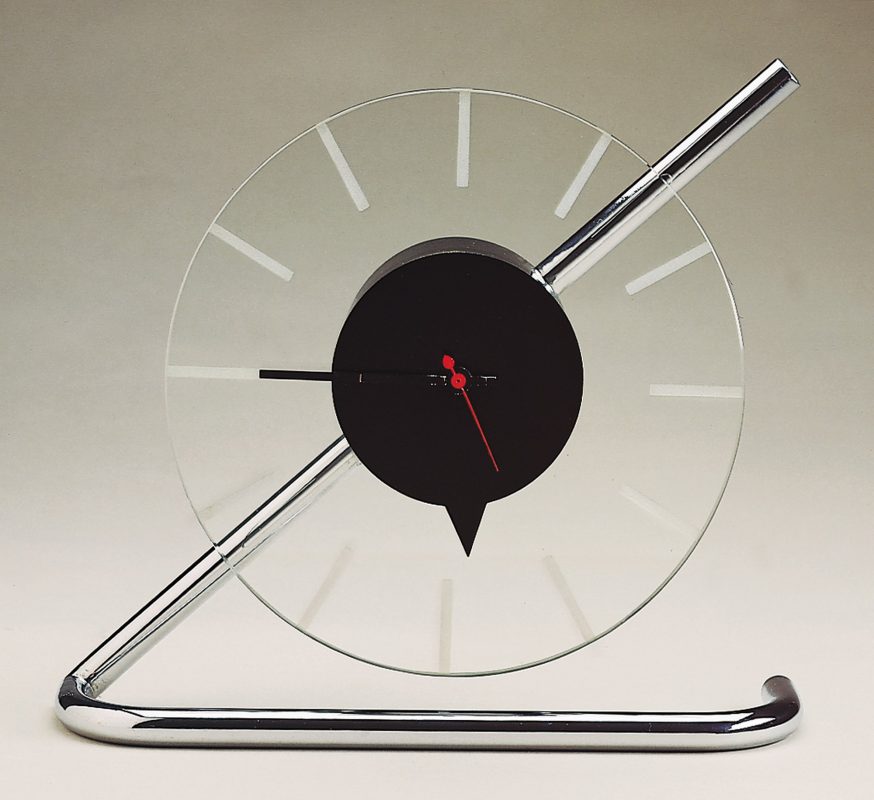 Gilbert Rohde’s Z clock, with its floating glass face mounted on a diagonal chrome bar, captured elegance through economy and transparency. In his use of the zigzag tubular chrome support, Rohde was informed by tubular metal furniture made by Marcel Breuer and his German contemporaries, designs he encountered in his travels in Europe in 1927. 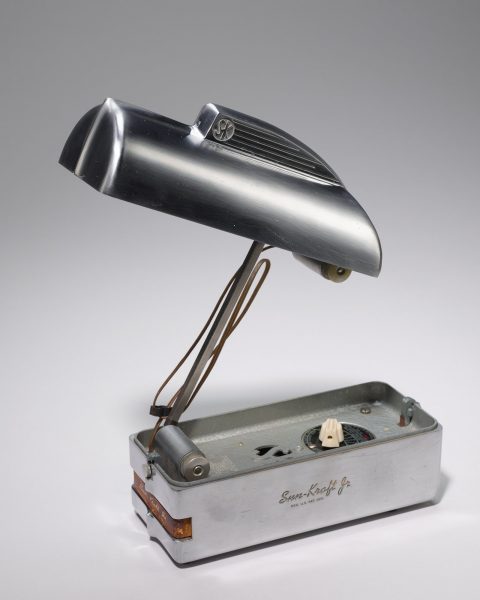 “A Promoter and Preserver of Good Health,” the Sun-Kraft table sun lamp was advertised for its ability to treat a variety of skin conditions, arthritis, sluggish blood circulation and respiratory ailments through the healing properties of ultra violet radiation (found naturally in sunlight). It also claimed men and women could benefit from sounder sleep, smoother skin and a general sense of wellbeing. Used on babies, it was said to promote healthy development. In 1945 Sun Kraft was sued for false advertising. Settled against the company, Sun Kraft was required to relabel it under the supervision of the Food and Agriculture Administration. Today, UV rays are known as the primary cause of skin cancer. 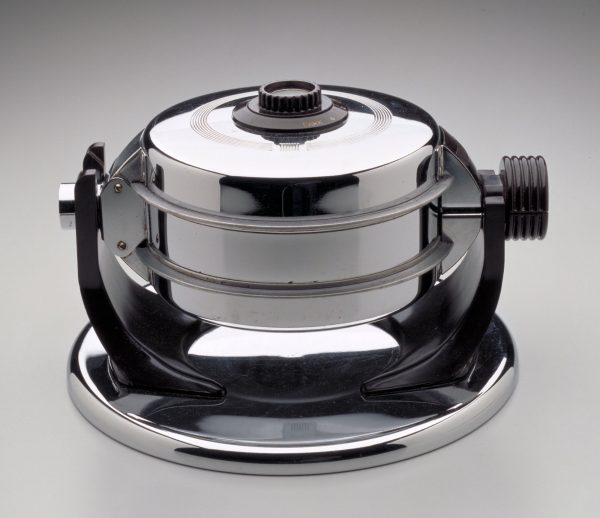 Manning-Bowman introduced a waffle iron in 1937 that could bake two waffles in the space and time of one, all in a streamlined case. Batter is poured onto the top griddle and then the unit is rotated allowing batter to flow to the second griddle. The 1937 catalogue noted “The Twin Reversible overcomes once and for all the inconvenience of trying to satisfy hungry appetites with inadequate servings.” By 1941, the unit was given a new name, the “Twin-O-Matic.”

To disperse air in a hot, stagnant room, a fan needs a set of elevated, whirling blades. In his elegant design for this table fan, Ezio Pirali shaped the blades like those of an airplane propeller and surrounded the fan with two intersecting rings, which suggest the path of planets around a sun, or perhaps the atom, whose electrons orbit its nucleus. While elegant, they would have done little to shield the blades from curious fingers.

It looks like something pulled from under the hood of a car, but this appliance was instead engineered for beauty. In the expert hands of the sttylist, the Tempera permanent wave machine could transform tightly curled hair. into lustrous locks and stick straight tresses to undulating waves. The first US patent for a permanent wave machine was taken out in 1928 by Marjorie Stewart Joyner (1896-1994), the African-American inventor and beautician. The permanent wave hair machine was an equal opportunity appliance, used by black and white women in pursuit of beauty. 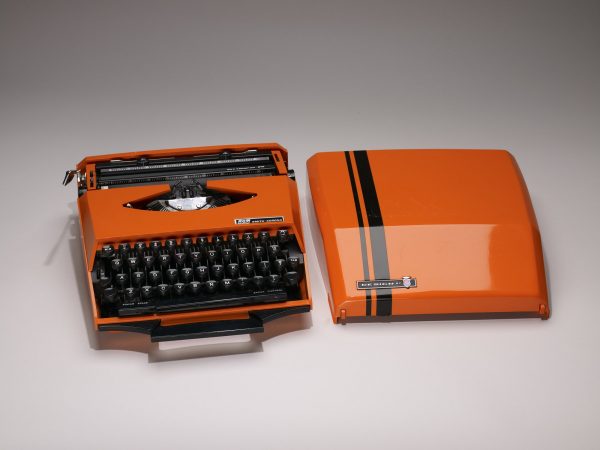 The first commercially successful typewriter was invented in 1878; within 10 years it had become an indispensable fixture of business life. Fit for purpose, its overall appearance changed little until the middle of the 1900s and the appearance of the Super G, a collaboration between Smith Corona, a maker of typewriters in the United States and other office machines and Carrozzeria Ghia, the Italian firm famous for designing stylish and sporty cars for Volkswagen, Alfa Romeo, and Ford. With its racing stripes, sleek lines, and bright colors, the Super G was more than a typewriter; it was an object of desire for the home. 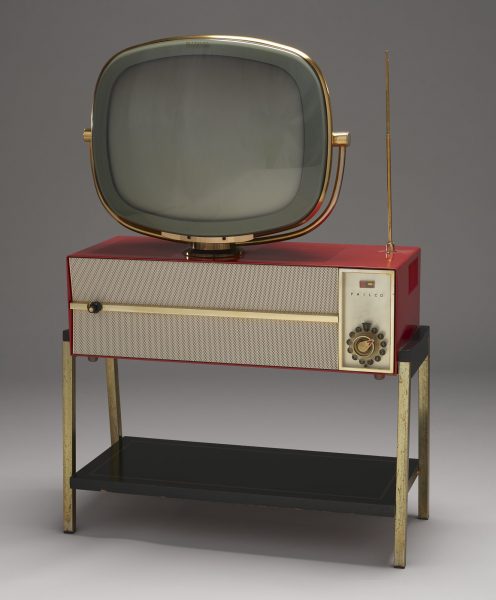 Television was the ultimate consumer product in the decades following the Second World War (1938-45). Increasing prosperity and the growth of leisure time, combined with mass production and affordability made the television a fixture in 90% of homes in the United States by 1960. Most manufacturers enclosed the bulky cathode ray tube responsible for the moving image on the screen in wooden cabinets styled to match contemporary furnishings. Philco’s “Princess” television did away with the cabinetry by mounting the streamlined tube, which could swivel right and left, on a table that called to mind a lady’s vanity. What more could a princess want?