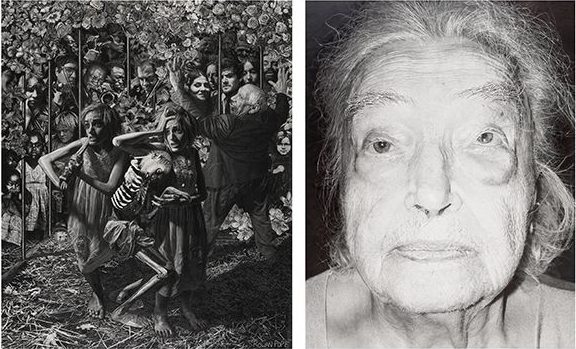 Mia celebrates the pleasure of pure, virtuosic draftsmanship with the first museum show of Minnesota artists and twin brothers Bly and Rowan Pope. They have worked side by side their entire lives. Their focus on drawing and meticulous, painstaking process sets them apart. Each dedicates hundreds (and sometimes thousands) of hours to a single work, drawing skillfully, obsessively, until pencil has transformed paper into a provocative image rendered with photographic precision.

Although the brothers use the same medium (graphite) and technique (photorealist) in their drawings, their subjects and approaches diverge. Bly concentrates on portraiture and nature. He scrutinizes the ordinary, overlooked, and seemingly banal to show such details of life are worthy of appreciation and artistic expression. Rowan focuses on narrative to examine a range of human emotions, a path that can lead to a chilling view of humanity. In their hyper-vivid depictions, both create haunting, memorable, and at times disturbing works of art.

The exhibition will feature a selection of their drawings, paintings, and works in process.