Tsukioka Yoshitoshi (1839–1892) is considered the last major artist of classical Japanese woodblock prints, known as ukiyo-e. His career spanned Japan’s transformation from feudal backwater to modern nation-state, largely during the Meiji period (1868–1912), when he was the undisputed leader in his field. In 2017, the Minneapolis Institute of Art acquired nearly 300 prints, drawings, and books by Yoshitoshi, which were collected by Edmond Freis over 35 years. These outstanding objects are of the highest quality and include all of Yoshitoshi’s masterworks.

This exhibition aims to highlight how Yoshitoshi worked, his skill as a draftsman, and how he responded to changing tastes between around 1860 and 1890. Some of the published prints will be shown directly beside his original sketches. This will be the first time that Yoshitoshi’s curious and largest-known painting—an image of six great generals of the East and West, including George Washington and Napoleon III—has been exhibited anywhere.

Enjoy in-depth, multimedia presentations of some of Yoshitoshi’s most important artworks.

Tsukioka Yoshitoshi was a prolific designer who produced more than 2,000 color prints for over 50 different publishers. He illustrated a small number of books and was also active as a painter; approximately 30 of his paintings have survived. Yoshitoshi died on June 9, 1892, at the relatively young age of 53. After his death, he achieved posthumous acclaim as the most significant Japanese print designer in the second half of the 19th century, on account of the novel style he employed, which included dynamic angles. 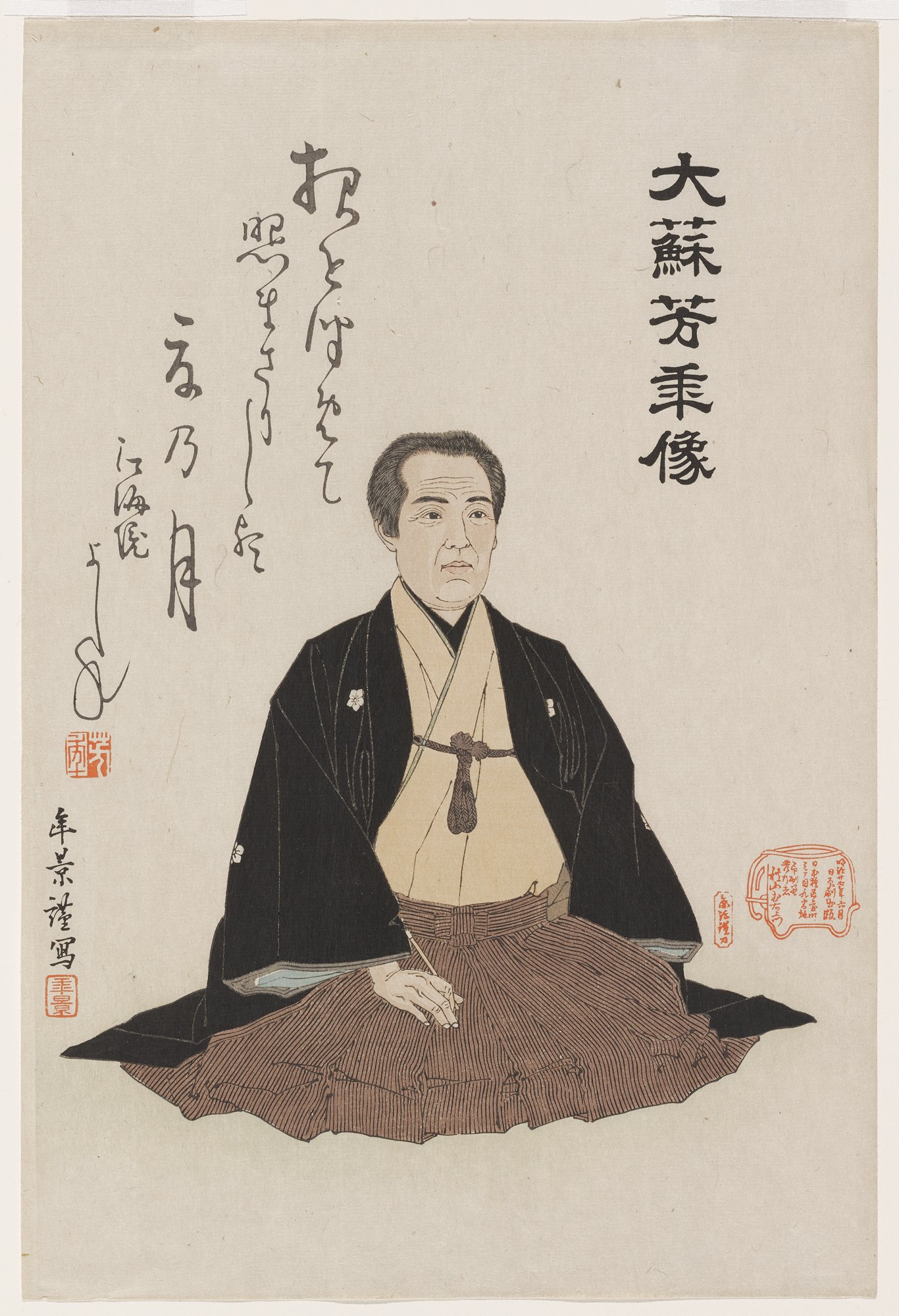 Yoshitoshi lived during a time of drastic and disruptive social change, including the opening of Japan to global trade and the rapid adoption of foreign technology and knowledge. He was born into a merchant family in 1839 and in the early 1850s became a student of Utagawa Kuniyoshi, the leading print designer of warrior subjects. Yoshitoshi’s earliest print was published when he was 14 years old. At first, he designed beautiful women and actors in a traditional style, like all other artists at that time, but then shifted toward realism. He also studied with Kikuchi Yōsai (1788–1878), a master of historical painting.

At age 19 Yoshitoshi became an independent artist and focused on historical subjects. He gained a reputation as a “war artist” because he often depicted violence. After recovering from what was described as a “nervous disorder” in 1873, he illustrated newspapers, a recent invention. In the 1880s, he became very successful through popular series like One Hundred Aspects of the Moon and Thirty-two Aspects of Behaviors.

Yoshitoshi rarely designed prints of beautiful women, a genre known as bijin-ga that was very popular at the time. The series “Thirty-two Aspects of Behaviors (Fūzoku sanjūnisō)” is his most important and best-known work of this type. Published in 1888, the series was inspired by the many so-called “beauty prints” created by Kitagawa Utamaro (1753–1806) and his successors, which had sold very well. Yoshitoshi’s series depicts women of various backgrounds, going back a hundred years, including court ladies, housewives, businesswomen, and servants—almost half the portraits are of courtesans and prostitutes. As with almost all beauty prints, the women are anonymous, but their facial expressions are more realistic than in previous eras. 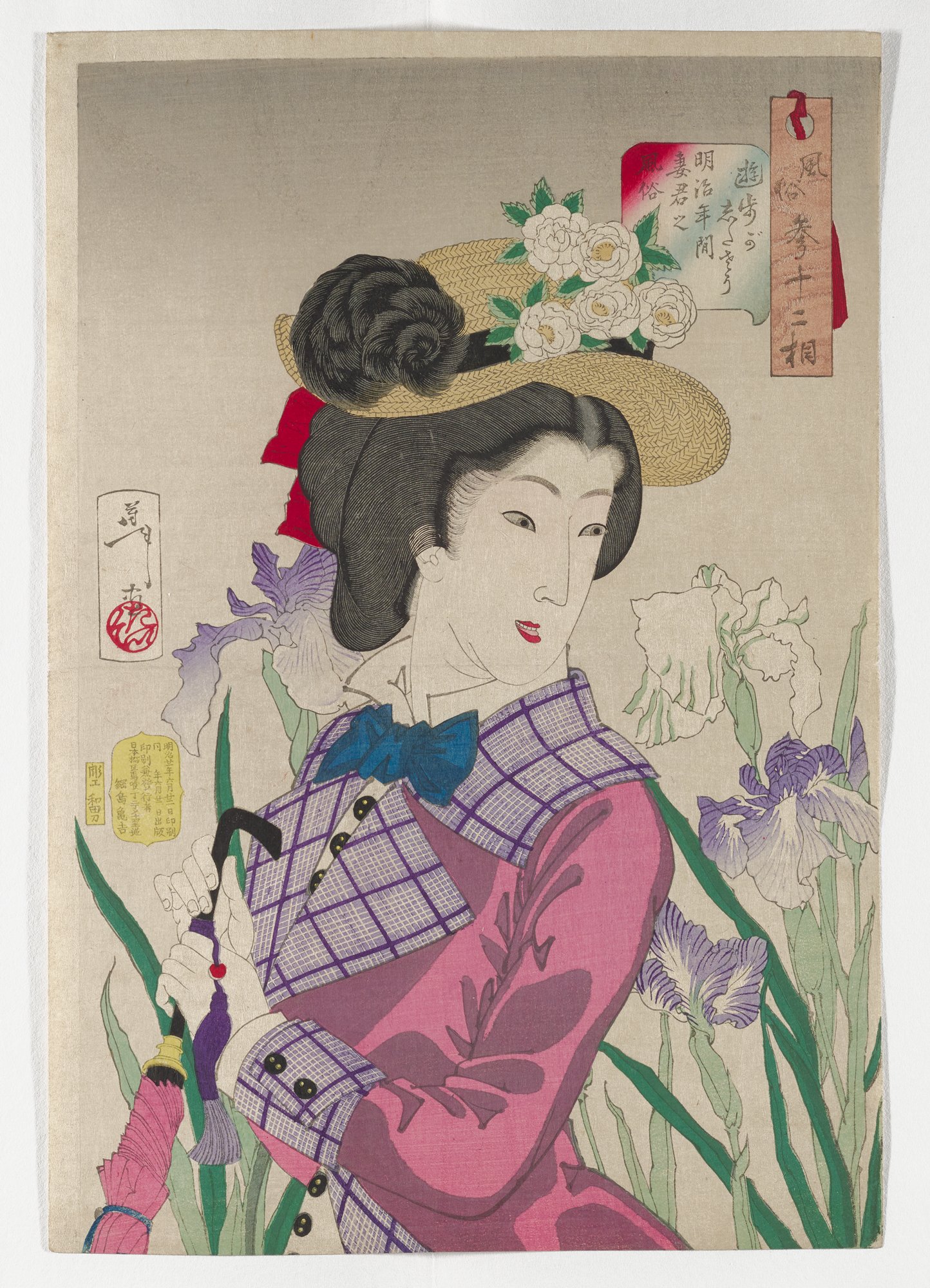 Tsukioka Yoshitoshi; Publisher: Tsunajima Kamekichi; Carver: Wada Yūjirō, Japan, 1839–92, Appearing as if Having Been on a Stroll, Behavior of a Lady of the Meiji period, 1888, Woodblock print (nishiki-e); ink and color on paper with embossing
The Mary Griggs Burke Endowment Fund established by the Mary Livingston Griggs and Mary Griggs Burke Foundation, gifts of various donors, by exchange, and gift of Edmond Freis in memory of his parents, Rose and Leon Freis, 2017.106.224

The so-called Flute Player Triptych from 1883 is arguably Yoshitoshi’s most famous work. The image shows a scene at night when the courtier Fujiwara Yasumasa (958–1036), famed for his flute playing, is being stalked by the thief Hakamadare, who has followed him into the reeds to steal his warm clothes on account of the approaching winter. Hakamadare was so enchanted by Yasumasa’s music that he was unable to attack him. Instead, Yasumasa led Hakamadare to his own home in order to give him a coat.

The way Yoshitoshi rendered the figures in his first triptych of this subject (1868) recalls the many warrior prints of his era. The background is busy, with the river and cloud bands cutting through the design and the many colorful flowers scattered throughout. Yoshitoshi’s second version (1882) conveys the opposite tone, and the design suggests a night scene. Color is mostly reserved for the figures, and Hakamadare’s reluctance to attack Yasumasa is noticeable in his facial expression and body language. 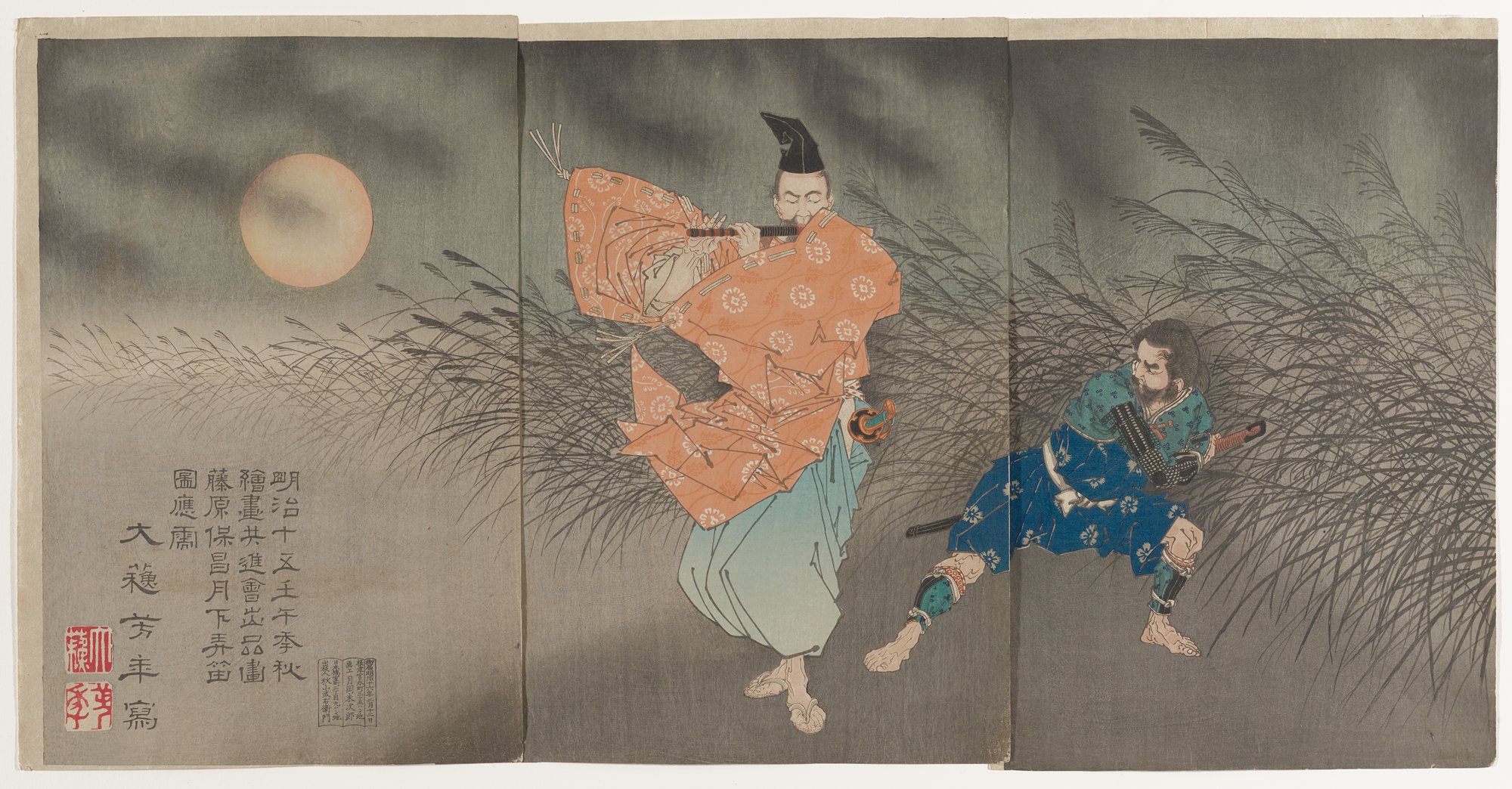 Tsukioka Yoshitoshi; Publisher: Akiyama Buemon, Japan, 1839–92
By Request, Picture of Fujiwara Yasumasa Playing the Flute by Moonlight, a Painting Shown at the Exhibition for the Advancement of Painting in Autumn 1882, 1883, Woodblock print (nishiki-e); ink and color on paper
The Mary Griggs Burke Endowment Fund established by the Mary Livingston Griggs and Mary Griggs Burke Foundation, gifts of various donors, by exchange, and gift of Edmond Freis in memory of his parents, Rose and Leon Freis,
2017.106.148a-c

Moon: Actor Ichikawa Sanshō as Kezori Kuemon, from the series The Snow, Moon, and Flowers (Setsugekka no uchi), 1890, Published by Akiyama Buemon, Carved by Wada Yūjirō, Woodblock print (nishiki-e); ink and color on paper, The Mary Griggs Burke Endowment Fund established by the Mary Livingston Griggs and Mary Griggs Burke Foundation, gifts of various donors, by exchange, and gift of Edmond Freis in memory of his parents, Rose and Leon Freis 2017.106.239