Baby Amelie was just two weeks old when she made her first visit to Mia. Her mother, Courtney, had been nervous about venturing out with a newborn. What if Amelie cries? How am I going to feed her? The prospect was almost overwhelming. But Courtney and her friend Esther Callahan, who works as a Curatorial Affairs Fellow at Mia had met as art mentors, and they wanted to share their love of art
with Amelie.

Public spaces are often unaccommodating to new moms, but Mia feels like a safe harbor, Courtney says. In fact, Mia became the site of Amelie’s first public diaper change, her first public feeding, and, of course, her first museum experience. It’s so important, her parents agree, that everyone has access to the arts—at every age.

Studies have shown that children benefit from museums both cognitively and socially. They make personal connections to what they see in museums, their imaginations are stimulated, and they are motivated after their visits to make meaning of their experiences. But Mia also serves as a truly public space, welcoming to everyone at every stage of life, in every circumstance.

Amelie posed for pictures with her family in the Buddhist sculpture court on the second floor and in front of Courtney’s favorite piece: George Morrison’s beloved wood collage inspired by Lake Superior. And she has returned, a regular already before her first birthday.

Your contributions make transformative experiences with art possible for all. Support Mia here. 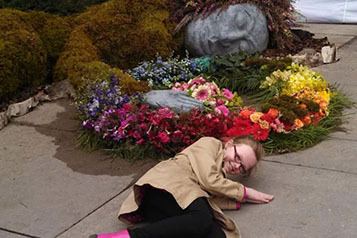 When Ann Treacy discovered Mia’s free Family Day, she had three children under age 7 and no money to spare. “Free makes something possible,” she says. “With three little kids, you don’t know if you’ll be somewhere for an hour or for 10 minutes before someone has a breakdown.

Mia offers programming and events for children of all ages and their families. Family Day, held every month, had 46,000 attendees in fiscal year 2019.

Mia delivered engaging arts experiences to children, families, and adults at more than 95 festivals and events throughout the Twin Cities.

Mia launched a partnership with the Minneapolis chapter of Tickets For Kids Charities, a national non-profit that provides free access for low- income and at-risk children
to arts, cultural, educational, and athletic venues in their community. Mia welcomed more than 250 participants to the special exhibition “Egypt’s Sunken Cities.”