Nils Heymann was a teenager when he fled the civil war in El Salvador, along with his mother, sister, brother, and other family members. They came to St. Paul, where his aunt was the first school principal of Latinx descent in Minnesota. And then he fell silent.

“I didn’t speak English, and with everything else going on in my life I kind of went quiet for about two years,” he recalls. Instead of talking, he worked through his emotions with art. He learned music and ceramics—any art class he could squeeze in.

Nils went on to study at the University of Minnesota. He traveled widely, during college and after, to India and England and Morocco. And then, when he was set to go to Boston for grad school, he went to Thailand instead and became a Buddhist monk. After seven years, he left the monastery and is now an art teacher in California as well as a meditation instructor.

He returns to Minnesota regularly and always stops in at Mia. “I visit my mom and I visit my ‘friends,’” he says, referring to his favorite artworks at the museum. And he thinks about what the museum has meant to him. “It saved my life,” he says, crediting Mia and the public library he frequented for grounding him amid turmoil. “Through it all, art was an anchor.” 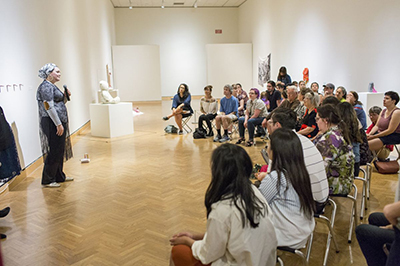 Essma Imady was 23 when she left Syria for Minnesota. She had struggled to determine her future, quitting chemistry college to pursue art, and then tanks were rolling through the streets. Her future was confronting her, whether she was ready for it or not.

The first major museum exhibition of art by Native women, “Hearts of Our People: Native Women Artists” honored the achievements of more
than 115 Native women artists from the United States and Canada spanning 1,000 years. From the New York Times to Forbes magazine, numerous press stories highlighted the significance of Mia’s exhibition, developed in partnership with top Native women artists
and scholars.

For “Hearts of Our People,” more than 60 object labels
were translated into the Native language of each artist whenever possible, ultimately representing more than 25 languages.

In spring 2019, 40 teen leaders from across the community came together for a co-visioning session to plan “Creative Fuel: A Youth Summit” held in fall 2019. The summit served as a platform for youth to connect around urgent social issues and explore how to creatively be a catalyst for collaborative problem-solving.