Mia’s Purcell-Cutts House, in the East Isles neighborhood of Minneapolis, is one of a kind. It was designed by William Gray Purcell and George Grant Elmslie specifically for Purcell and his wife, Edna, and their two sons. But it was also informed by Purcell’s desire to create a home for the modern family of 1913, with features that could potentially be replicated in more affordable houses. Because it employed so many new concepts and technologies, like an open plan and a candlestick telephone, it was an experimental house for its time.

The candlestick telephone is long gone, updated by the home’s second owners, Anson and Edna Cutts. But the home’s decorative elements, which surpassed that of other houses designed by Purcell and Elmslie, were largely untouched by the Cutts family. These elements were created with experimental materials and treatments, and have required extra effort to preserve them since the home became part of Mia’s collection in the 1980s.

As the curator of the Purcell-Cutts house, I’ve been especially intrigued by the house’s Japanese-inspired aspects: its ground-hugging back porch, its wood screen dividing the entry and stair hall, and its grass cloth-covered folding screen in the master bedroom. All are remarkable, considering the fact that the architects never visited Japan.

The cypress trim of the home’s exterior, for instance, was originally given a jin-di-sugi treatment. This Japanese technique artificially ages cypress wood for textural effects and involves wire-brushing the wood in the direction of the grain, to remove some of the soft wood—recessing it so that the hard grain would “pop” forward. It could also be carved. As William Purcell recounted, he and Elmslie directed the craftspeople working on the Purcell-Cutts House to employ “a sugi [Japanese cedar] finish with filtered creosote oil and wire brushes.” The effect confers a unique graphic quality on the façade.

Creosote, however, is a known carcinogen. Since the late 1980s, when Mia did an initial restoration, the museum had been using an opaque brown stain instead. When Mia staff recently determined that the exterior wood trim should be refinished, as it was drying and graying, we planned to use the opaque stain as before.

Most people think of using native woods for exterior wood trim in Minnesota. But this trim is generally painted, so the type of wood isn’t that important (this is also the case in the second-floor bedrooms at the Purcell-Cutts House). Why did Purcell and Elmslie specify cypress—not native to the Upper Midwest—for Purcell’s home, especially with a fairly labor-intensive treatment?

One answer is the subtle textural effects. Purcell and Elmslie consistently varied textures in unexpected ways throughout the house: in the sand-finished stucco, the heavier gravel aggregate used in planters and walkways, and the rare mauve raindrop sandstone sourced for the fireplace mantel. Using cypress, where both color and texture can be accentuated, was in line with P&E’s overall approach to the house.

Purcell and Elmslie had gotten the idea for this Japanese treatment from Minneapolis designer John Scott Bradstreet, who made this cypress treatment his signature for furniture in 1900 and interiors around 1905. You can see this in the Duluth Living Room at Mia, a rare survivor of his style.

Knowing that Bradstreet’s jin-di-sugi interiors were enjoyed by the wealthy few, I wondered whether cypress itself was inaccessible to most people outside the Gulf Coast, where it is a native wood. Available mainly in the American South through most of the 1800s, cypress became more widely marketed starting in the 1890s by companies such as the A.T. Stearns Lumber Company in Boston. A brochure from 1895 states that company president A.T. Stearns “was the pioneer in the introduction of cypress in the North” and that they could barely keep up with inquires about the wood. It was touted as having an inherent preservative, rendering it durable and fire- and bug-resistant. By this time they were supplying cypress all over the Northeast. A third Stearns edition from 1900 notes that even over the intervening five years, cypress “has become so well known and so universally used” that it hardly needs an introduction.

It’s possible that Bradstreet, with his East Coast connections (he was originally from Massachusetts) could have sourced from Stearns around 1900. But by the time Purcell built his own house, the Midwest market had broadened. In 1908, Sears, Roebuck and Company began marketing their prefabricated homes featuring cypress shingles and cypress window and door frames—making sure to note cypress as a superior wood for their high-quality homes.

Such was Sears’ investment in construction materials that they purchased their own factories: first a lumber mill in Marion, Ohio, in 1909—a year after their first catalogue was published—and, two years later, a 40-acre lumber yard in Cairo, Illinois. Shipment would have been easy, via rail or Mississippi River barge. These factories not only prepared wood for Sears homes, but also sold their lumber to others wholesale. A 1911 ad in American Carpenter and Builder Magazine advertised Sears’ high-quality wood, which undoubtedly would have included cypress, due to its prevalence in Sears homes.

By 1913, cypress would have been abundantly available to P&E. Ironically, Bradstreet died one year later, in 1914, just as his jin-di-sugi interiors were disappearing from his order books and their Art Nouveau style was going out of fashion. The Prairie School evoked by P&E lived on for several more years, even in Sears catalogues—as late as 1918, Sears offered two Prairie School-style houses, the Carlton and the Aurora, designed by Chicago architect John Van Bergen.

Going Back to the Side Door

When Mia began making plans for the latest refinishing, Nick Doyle came to me with an alternative to the opaque stain. Nick is a craftsperson from Chiral Arts, Inc. and an ardent student of the house. He noted that the opaque stain was not very aesthetically pleasing, and it masks the wood underneath, hiding deterioration from detection. While making repairs to the side entry door, he had noticed that the storm door insert retained the original stain, as did the wood trim protected inside the second-floor sleeping porch. These areas, with a rich, deep, and unmasked color and surface, provided a guide to Purcell and Elmslie’s original intent and the treatments they used to achieve it. 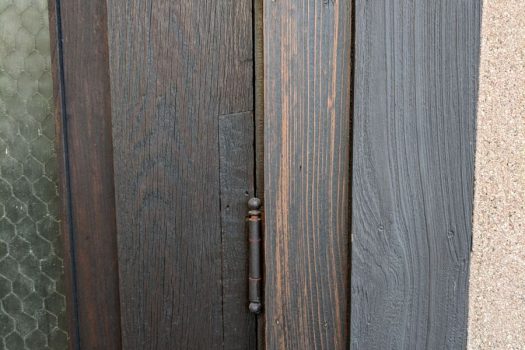 Purcell-Cutts House side door showing storm door insert with original jin-di-sugi treatment (left side, next to glass); door conserved as part of window conservation project (thick board to the left of hinge); and cypress with opaque stain (framing at far right)

He proposed a transparent, water-repellent preservative that was non-toxic to apply (we had several discussions about the 1913 craftsmen and their occupational health hazards) and lets the beauty of the cypress wood shine through. This includes the dark/light striations created by wire-brushing the soft grain back. Test areas confirmed the return on investment for this process, which is initially more labor intensive but easier to maintain in many ways. 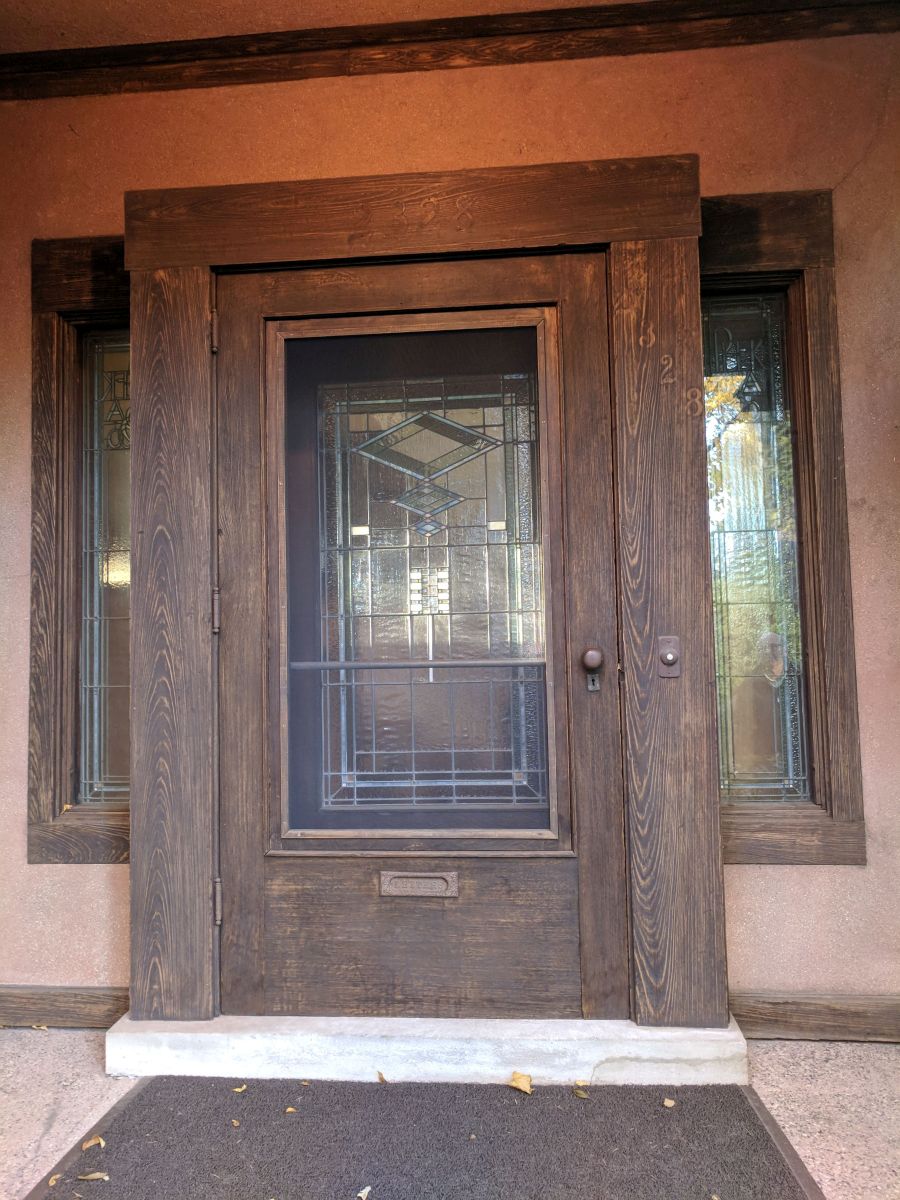 Chiral Arts, Inc.’s team finished the east and west facades of the house in summer 2019, and Mia plans to treat the north and south facades in the next year or two. Prepping the wood included re-sanding it, which was the most laborious part. Additionally, some areas were so weathered (think aged cedar shakes) that the stain needed multiple coats. 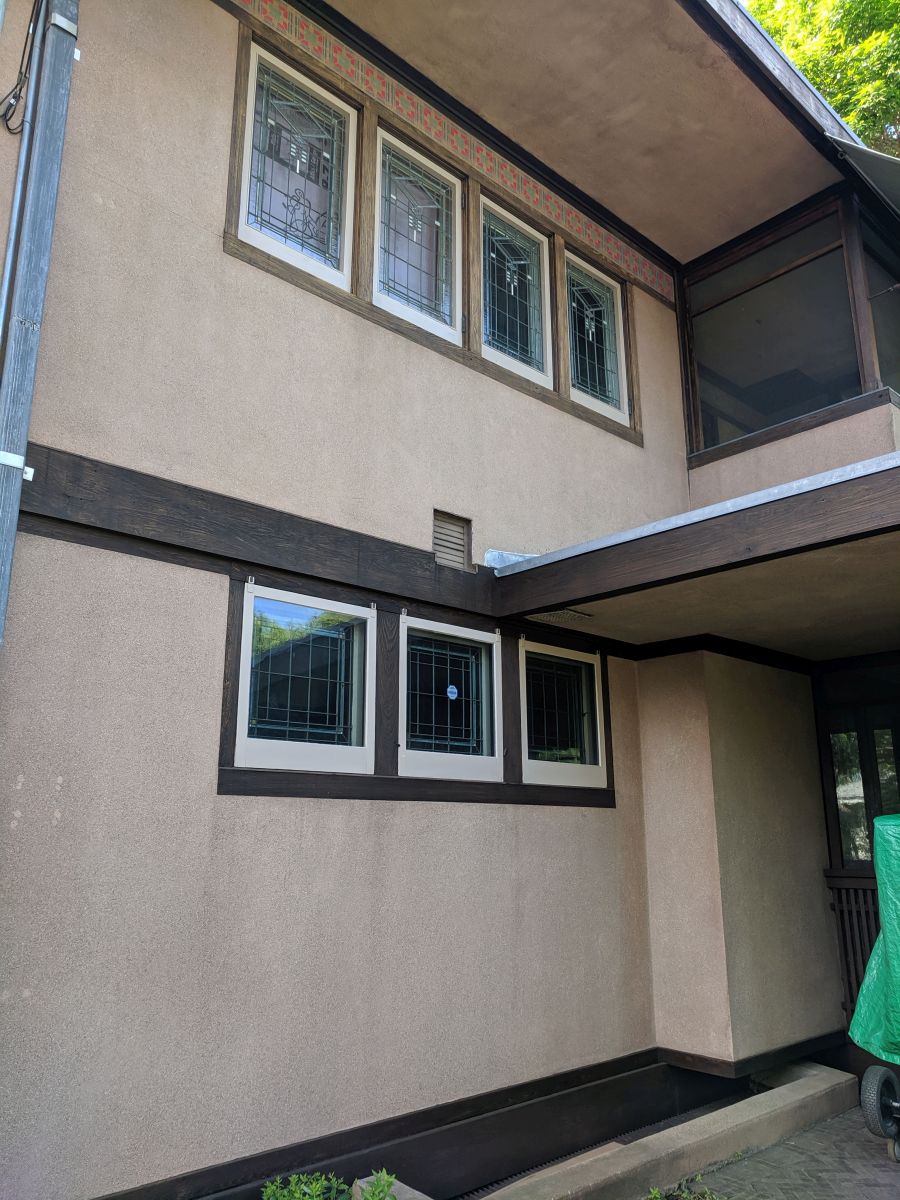 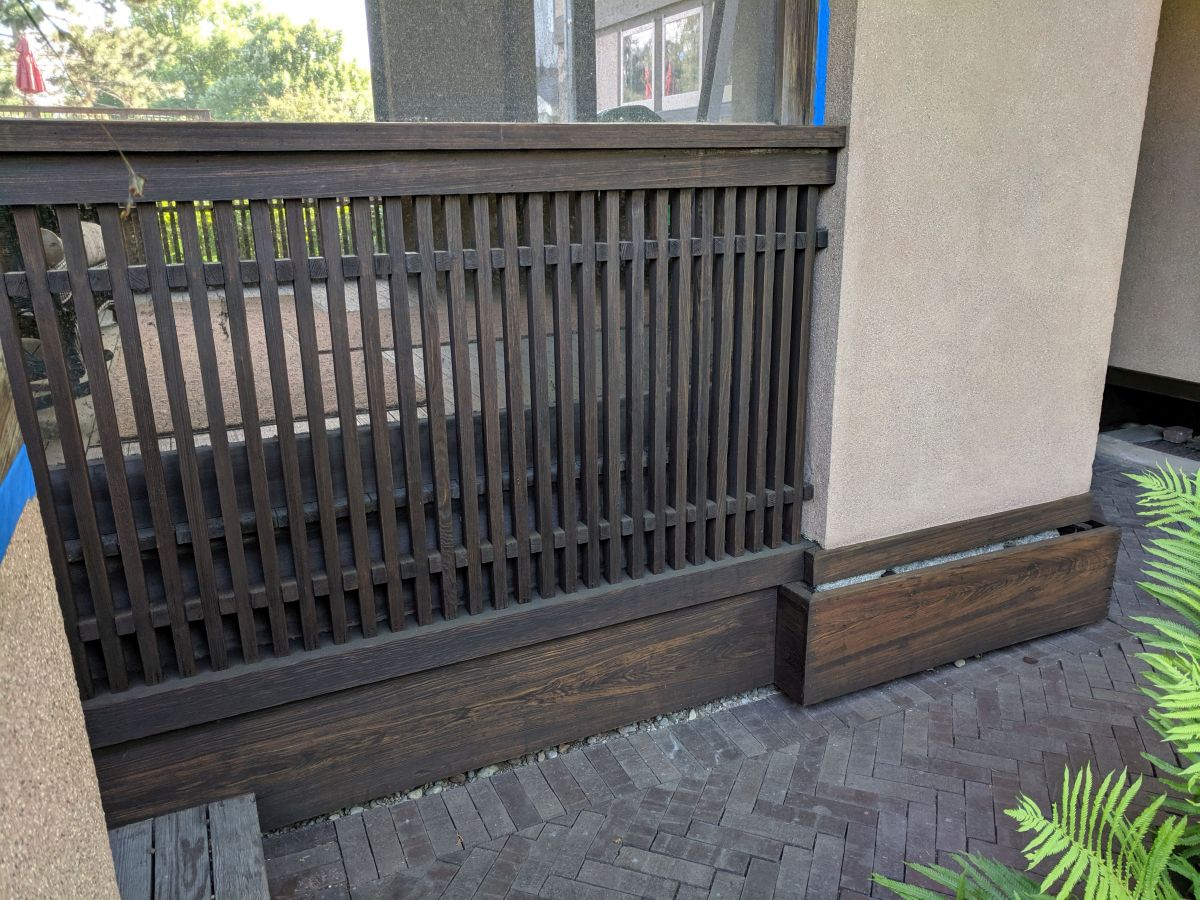 But the effect is striking, and closer to the contrast and texture Purcell was looking for, complemented by the textural subtleties of the stained concrete walk and the sand-flecked stucco. Proving once again that the house’s beauty is the sum of its parts rather than one single element, the revitalized wood trim reinforces the “wow” factor from the street.

You can see the wood’s “new-old” look on tours of the house, conducted monthly.