A journey of quilts: How five of the famous Gee’s Bend textiles came to Mia

The hamlet of Gee’s Bend is in the Black Belt of Alabama, a reference to the rich dark soil that enabled the region’s cotton plantations and to the thousands of enslaved African Americans who worked them. After emancipation, Gee’s Bend fell into a cycle of sharecropping, debt, and poverty. A dam built in 1962 flooded much of the area’s best farmland. Ferry service across the river was halted, to dissuade African Americans from voting. Many people left.

But in the 1980s, a colorful collector named William Arnett began driving up the red-dirt roads of the Black Belt, into areas no one had gone looking for art before. And one day Arnett crossed the Alabama River into Gee’s Bend, and found a community of resourceful quilters who for decades had been keeping their families warm by patching old fabrics into uniquely free-form, abstract patterns. Arnett and his sons returned again and again, acquiring dozens of quilts.

In the early 2000s, the Arnetts helped organize a touring exhibition of these quilts, which made Gee’s Bend almost instantly famous, if not rich. In 2010, the Arnetts created the Souls Grown Deep Foundation, in Atlanta, to help the artists make the most of this infusion of interest and to preserve what they’d collected: over a thousand textiles, sculptures, paintings, and other works by more than 160 African American artists in the South. It’s an unparalleled representation of a still largely unheralded tradition, what William Arnett has called “the one great thing America has ever had to give to the history of visual arts.”

Starting in 2014, the foundation has pivoted toward disseminating as well as preserving this heritage, placing the work in major museums around the country. The goal is to eventually place almost all of it. If this art belongs in the company of work by Jasper Johns, Robert Rauschenberg, and other better-known American artists, as Arnett has long argued, then it literally needs to be there — in the so-called encyclopedic collections of the country’s largest art museums. 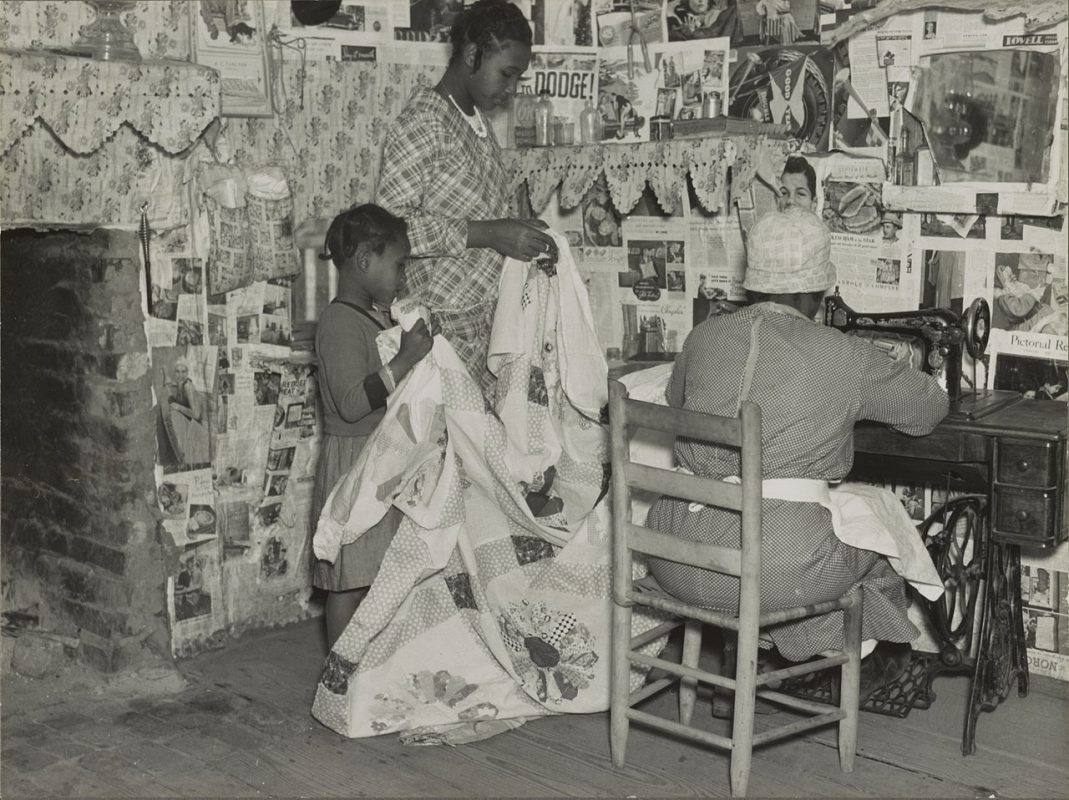 In this 1937 photograph taken by Arthur Rothstein for the Farm Security Administration, Gee’s Bend quilter Jorena Pettway works as two young women hold fabric for her.

Kaywin Feldman, now the director of the National Gallery of Art, was head of the Minneapolis Institute of Art when she got a call more than a year ago from Souls Grown Deep. They were offering dozens of artworks—including Gee’s Bend quilts—at a substantial discount, a partial gift. The foundation had already partnered with the Metropolitan Museum of Art, the High Museum of Art, and several others, and now they were similarly attracted to Mia’s broad global collection.

“They wanted this art put in dialogue with other kinds of artworks, not just relegated to one gallery,” says Nicole LaBouff, Mia’s associate curator of textiles. “As an encyclopedic museum, we could do that.”

In 2019, Mia ended up acquiring a total of 33 artworks from Souls Grown Deep. LaBouff chose five quilts from Gee’s Bend, all made well before the Gee’s Bend phenomenon of the early 2000s. (One was featured on a Gee’s Bend series of postage stamps issued in 2006.) Other works include an assemblage by Lonnie Holley, the artist and musician from Birmingham, Alabama, who was among Arnett’s early discoveries, as well as a wall relief by Thornton Dial, who died in 2016 and remains one of the best-known self-taught artists in contemporary art.

Mia quickly began integrating these pieces into exhibitions, such as “The Enduring Soul,” featuring works by African and African-American artists, and “Recent Acquisitions: Fiber Art at Mia,” where a quilt by Loretta Pettway of Gee’s Bend is prominently displayed alongside a tapestry by Swedish American artist Helena Hernmarck and a finely wrought sculpture of lace by Slovenian artist Anda Klancic.

Pettway’s piece, made in 1958, is notable not just for its traditional “bricklayer” pattern, resembling pyramids of fabric strips (she apparently fantasized about living in a big brick house), but also its pieced back. Typically, a quilt backing is made of whole cloth, but here Pettway has pieced it together just like the front — suggesting a scarcity of materials and her resourcefulness in making colorful use of what she had: worn denim, patched pants, and whatever else was on hand.

Mia also hired an intern, Starasea Camara, to help with the intake of objects and to organize an exhibition later this year of 23 of them. Camara is a student at the University of Minnesota and one of several interns working with Souls Grown Deep at museums across the country. Last fall, they took a road trip through the Black Belt with Scott Browning, the foundation’s collections manager, and Raina Lampkins-Fielder, its curator. Eventually, they made it to Gee’s Bend.

Some things have changed since the Gee’s Bend boom. Ferry service was restored in 2006, and the terminal now includes a Welcome Center full of sewing machines, where visitors can watch women quilt in the mornings and purchase their work. A Quilt Trail winds through the area, marking quilters’ homes. In 2007, at the height of the frenzy, a few quilters had sued the Arnetts alleging they had defrauded them. But the suit was soon resolved, and Browning is now working with artists and their descendants to claim copyrights and compensation, and to sustain their legacy.

Camara sensed that the frenzy of a decade ago had settled into resolve. The foundation has partnered with the quilters on projects in town as well as placing the art in museums, and more plans are in the works. The road trip, Camara says, was “a sneak peek at how Souls Grown Deep is in the community now. Not looking back at what happened before but plans for the future.”

Camara also noticed what hasn’t changed. When ferry service was cut off, in 1962, at the height of voter registration drives in the South, the local sheriff reportedly said, “We didn’t close the ferry because they were black, we closed it because they forgot they were black.” At the time, quilting helped bring people together, in a kind of communal self-determination. And today, Camara says, you can still feel it there. “It really brought our focus back to where this began,” she says, “the experience behind the phenomenon.”

Top image: A quilt made by Loretta Pettway of Gee’s Bend in 1958, now in the collection of the Minneapolis Institute of Art through a partial gift of the Souls Grown Deep Foundation. © Loretta Pettway / Artists Rights Society (ARS), New York