A soft landing for hard truths: L’Merchie Frazier’s mesmerizing quilts and the questions they ask

The new exhibition “Freedom Rising: I Am the Story,” now on view at Mia, features more than a dozen quilts made by the Massachusetts artist L’Merchie Frazier, including one depicting the Civil War heroics of Robert Smalls. Born into slavery in South Carolina, Smalls escaped by commandeering the Confederate steamer he was working on, delivering the ship to Union forces and himself, his family, and others on board to freedom. He went on to become a politician, in his home state and in Washington, D.C., serving as one of the first African Americans elected to Congress. 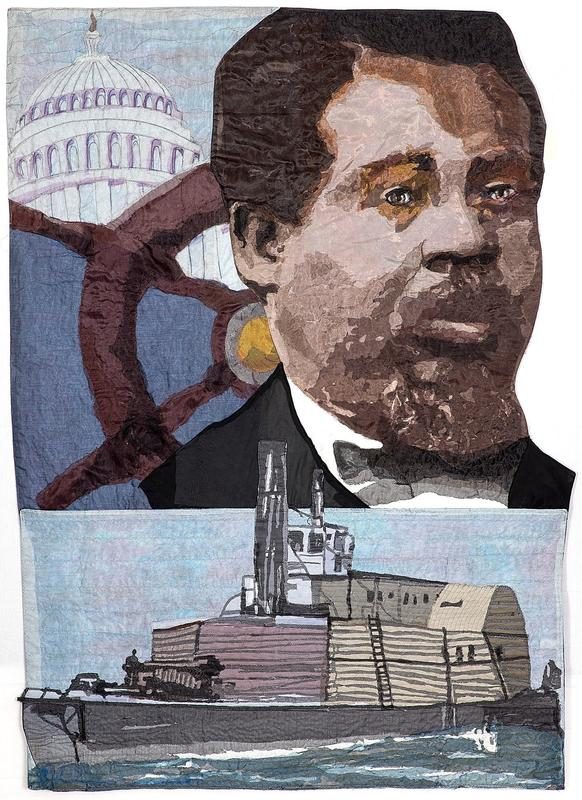 In Frazier’s rendering, it’s a triumphant scene: Smalls is dressed in suit and tie, surrounded by a ship’s wheel, the U.S. capitol, and the humble-looking ship—the C.S.S. Planter—that brought him fame and freedom. But like her other quilts, it also evokes the kind of challenging questions that Frazier has dropped into the labels for the show: Who has the power? What histories have you not learned and why? Why are labels created for groups of people, engendering bias and racism?

Frazier is a historian and a poet, as well as the Director of Education and Interpretation at the Museum of African American History, based in both Boston and Nantucket, Massachusetts. This background is suggested in her quilts, which highlight the evocative moments of a history, not unlike a teacher introducing a new lesson. A Black soldier in the Civil War. The Black Panthers. A young Black man in a suit of caution tape. Frazier notes that her quilts “examine the lives and legacies of African-descended people, including children and their communities across centuries of memory, places, and activism.” For some people, she knows, this may be an entirely new curriculum.

This examination reads as a reclamation of histories that have been whitewashed, hidden, or ignored. The quilts are mesmerizing in their narrative quality and also in their uncanny realism. Layers of fabric—gauzy, iridescent, and opaque—are carefully pieced together to create almost shrine-like depictions of historical figures, fellow artists, and people whose identities have been lost or remain unknown to the viewer.

The quilts seem like invitations to learn and unlearn, at a moment when the country is reckoning with its history of racism and white supremacy. “Freedom Rising” is part of a larger suite of shows in the Twin Cities called “We Are the Story,” featuring the work of the Women of Quilters Network, of which Frazier is a member. The shows came together after the death of George Floyd last summer, when the Textile Center, based in Minneapolis, partnered with the quilters to put their thoughts into thread.

Carolyn Mazloomi, who curated the series and founded the Women of Color Quilters Network, told the New York Times, “When people think of quilts, they think about warmth and security. So they can be a kind of soft landing—a way to tell the story of difficult topics.” In her images of Black history and contemporary life, Frazier wraps us in something many Americans choose to avoid: the truth.