Visitors to “Dressed by Nature: Textiles of Japan,” on view at Mia through September 11, will be continuously astonished by the diversity of materials that makers across the Japanese archipelago have fashioned into garments. Some materials make a lot of sense: a linen-like textile woven from banana plant fiber sounds perfect for those subtropical Okinawan summers. Other materials make us question what we thought we knew about them. Paper raincoats? How does that work, exactly? 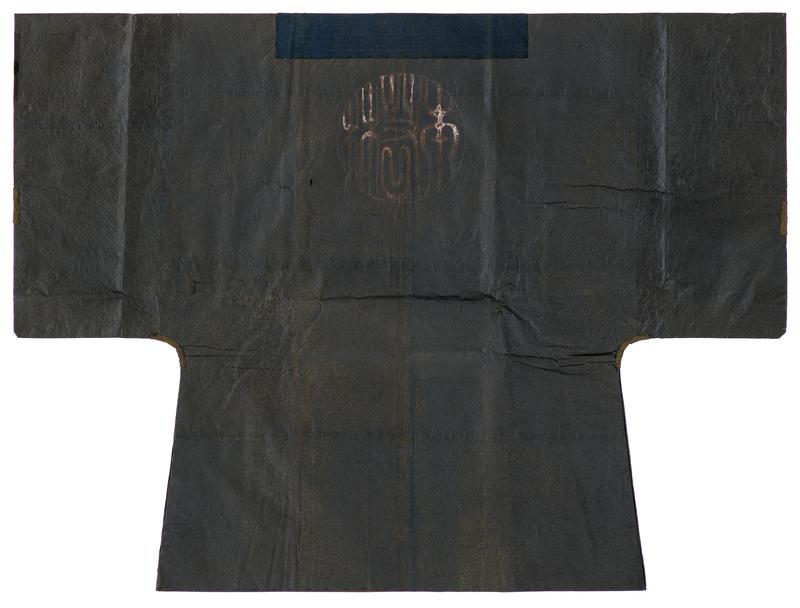 And then there’s fish skin. Despite recent efforts by a company in Germany to popularize the material as an environmentally friendly alternative to leather, it remains largely unknown to much of the world, at least as a textile. Nonetheless, it is a testament to human ingenuity and cultural diversity that two fish skin festival coats are the first stop on a textile-centered tour of Japan that takes us from the far north to the southern tip of this island chain.

These coats were made by indigenous Nivkh women, from the Amur region of Russia’s far east, a land of wet summers and snowy winters where indigenous lifeways embraced the bounty of both land and sea. This took the form of animals and fish, but also trade with far-flung powers, from China and Russia to Japan and Korea.

Products of their Environments

In terms of their materials, tailoring, and decoration, these coats are perfect expressions of the lived realities of the people who made and wore them. The skins themselves were harvested from the abundant schools of amur carp and chum salmon that make their homes along the region’s rivers and coastlines. The cut of the robes, with their tapered sleeves, curved hemlines, and diagonal plackets fastened high under the armpit, are related to Manchu robes from northeast China. The Manchus brought this style to the imperial court when they conquered China in 1644—imperial dragon robes and fish skin coats are, in fact, distant cousins.

The complex, linear designs that cover the backs and hems, distinguishing them from more utilitarian garments, seem to relate not only to Chinese motifs (dragons, phoenixes, and the mysterious taotie mask face) but also to the petroglyphs that the Nivkh’s forebears carved on stone outcroppings some 5,000 years ago. 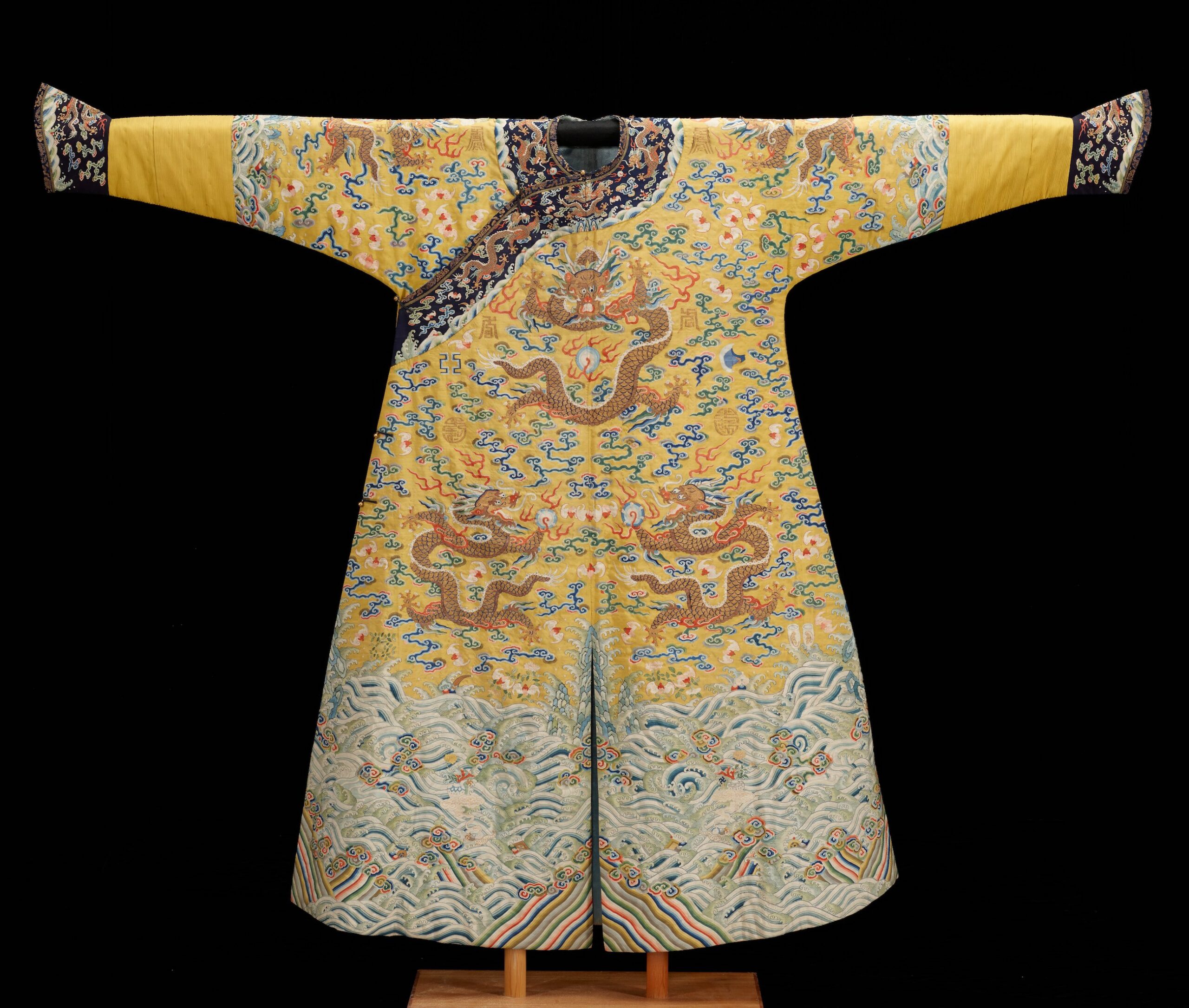 In fact, fish skin attire has always been an important cultural signifier for Nivkh people, surviving their forced assimilation during the Soviet era and the earlier adoption of imported materials like cotton. It was a way to set themselves apart from their neighbors, who may have had similar languages, religious beliefs, and lifeways but looked to the land—not the water—for their leather. Indeed, early Chinese sources refer to Nivkh people as “the fish skin tribes.”

The garments were made by women who, as seamstresses transforming animal skins into human attire, were recognized not only as practical contributors to their communities but also as vital stewards of animal-human relationships. They took this responsibility seriously. Traditionally, they would not sew skins while men were hunting and fishing, lest the activity offend the hunted animal and result in lost game or, worse, a hunting accident. When adding decoration, women chose designs they knew would please the spirits of the natural world, and they placed them with an eye toward protecting the wearer—on vulnerable spots like the back, and along the hems and edges of a garment’s openings where malevolent spirits might enter. 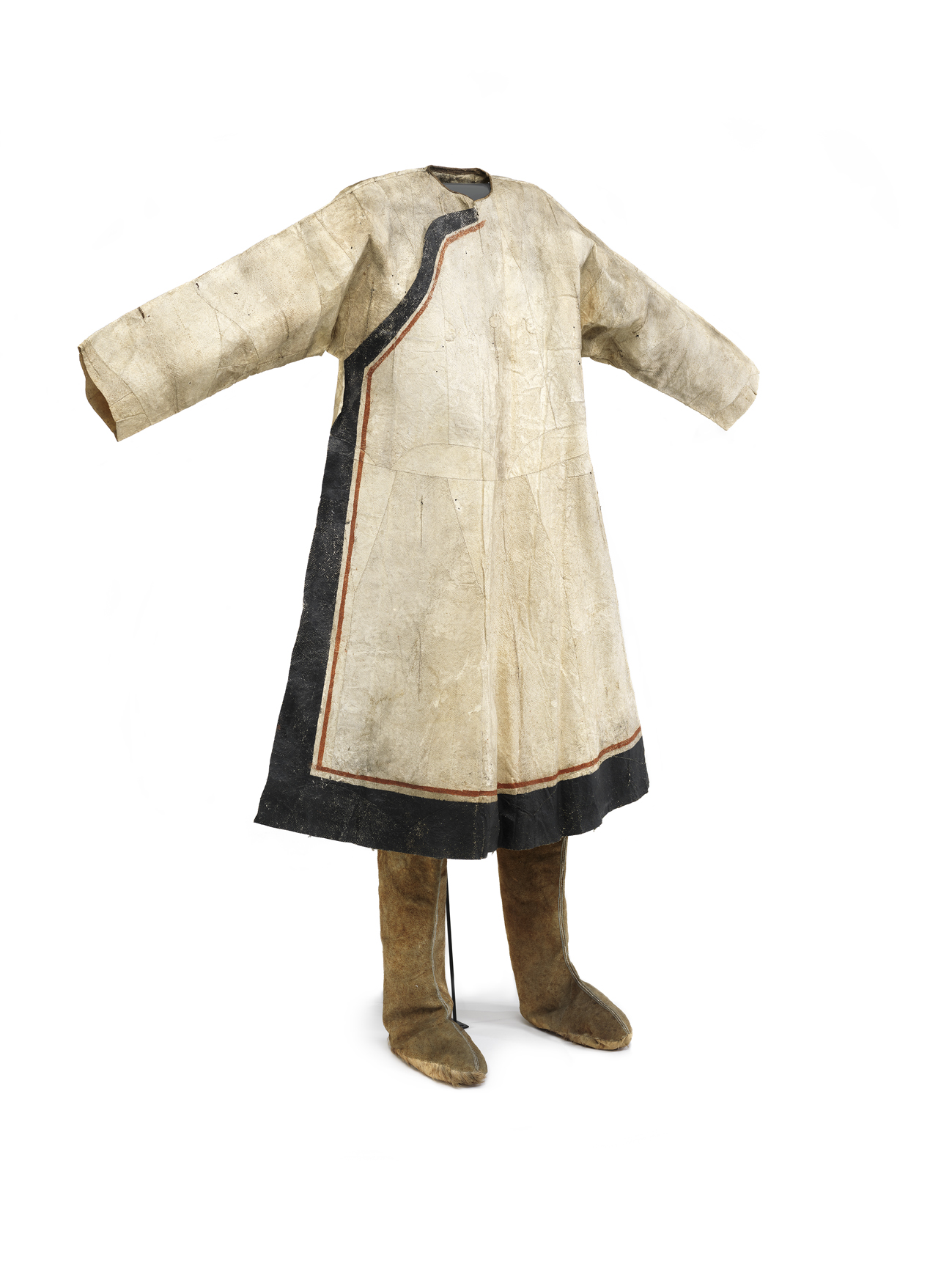 Women’s clothing, collected from a Nivkh community in 1871, now in the National Museum of Denmark. Photo by Roberto Fortuna, courtesy Wikimedia Commons

Outdoor enthusiasts, whether Boy Scouts or snowboarders, know that layering is the way to stay warm and dry. Place warm, fluffy layers closest to the body, and then cover those with a water- and wind-proof outer layer to keep the heat in and the wet out. This approach to dressing for the elements was originated by peoples like the Nivkh and their neighbors, not to mention other Indigenous communities in present-day Alaska and Canada. Smartly combining local materials to maximize their innate properties, they developed ways to survive and thrive in extreme environments. Fish skin, after scraping, cleaning, drying, and kneading, is very thin but also quite strong and flexible. (And no, it doesn’t smell fishy.)

Nivkh women used reindeer sinew to sew the pieces together. Not surprisingly, in their choice of materials, they knew exactly what they were doing: in wet conditions, sinew thread expands, plugging the needle holes in the skin and rendering the whole garment more waterproof. Fish skin garments (and their North American counterparts, sometimes made from fish skin but also intestinal tissue such as seal gut) were the original soft shells: lightweight, waterproof, and windproof outer garments that could be worn on their own in mild temperatures or in combination with warmer underlayers in winter. 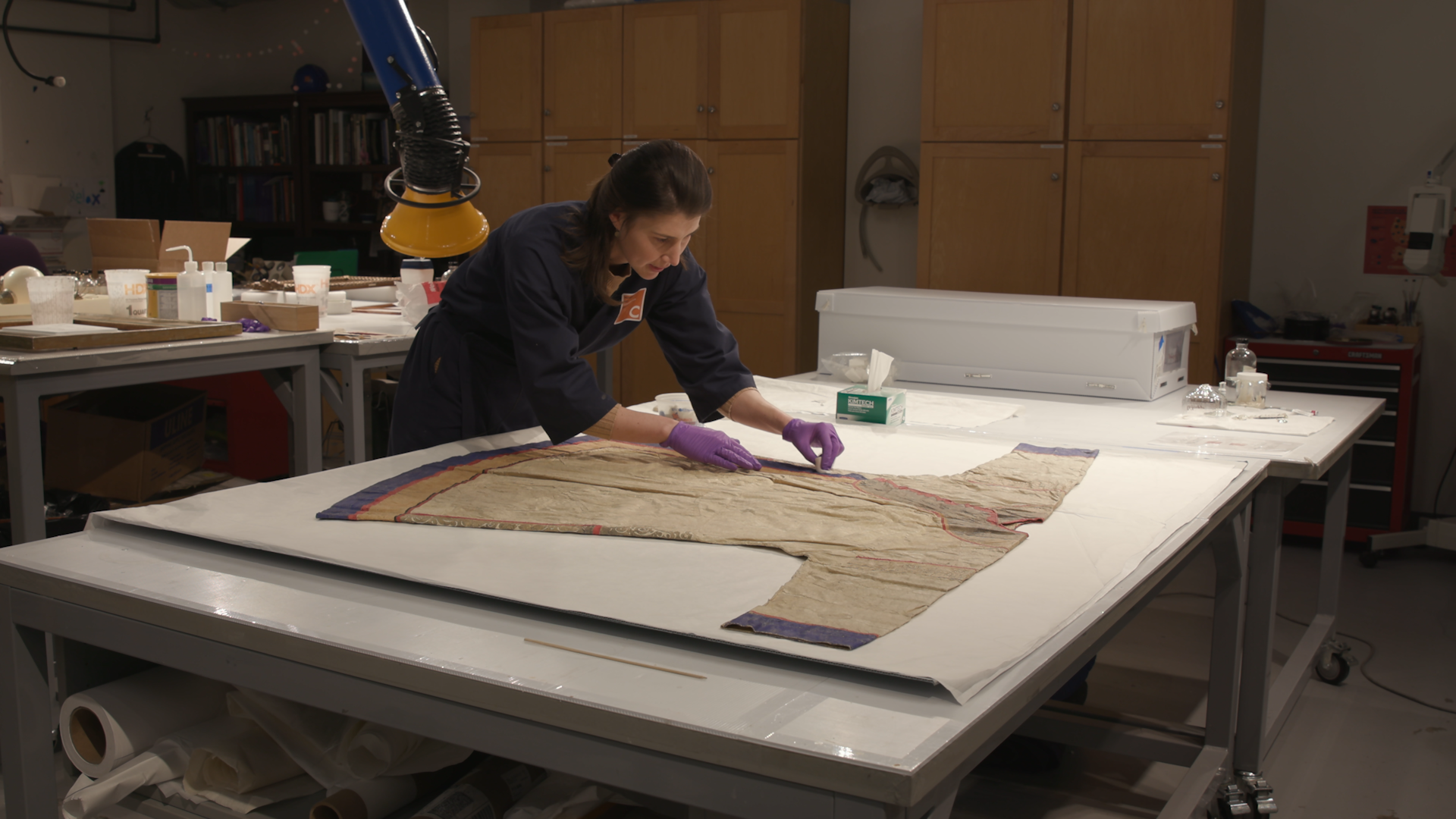 The two Nivkh fish skin festival coats in “Dressed by Nature: Textiles of Japan”—one in Mia’s collection, the other a promised gift—are remarkably well-preserved given their age and use. Nonetheless, they were in need of cleaning, repair, and some relaxing, so they could be displayed safely and so visitors could see the makers’ handiwork without distracting dirt and creases.

Conservator Courtney Murray, of the Midwest Art Conservation Center, cleaned and repaired the two coats. Highlights of her work, and what she discovered in the process, are below.

While today museums work hard to provide safe, sterile, and stable storage environments for artworks, in the past the impact of dust, light, and temperature and humidity changes weren’t always recognized. Conservators call the dirty layer that objects can acquire in storage “museum grime.” The Nivkh coats received a gentle cleaning to remove that grime while retaining the soiling that came from actual use.

Both coats had been folded before being stored, leaving deep creases that are not only distracting for viewers but also be very hard on skin and leather. The creased material stiffens and weakens over time, making it susceptible to holes and tears. Murray’s task was to relax and reshape the creased skin by gently introducing moisture to these areas. 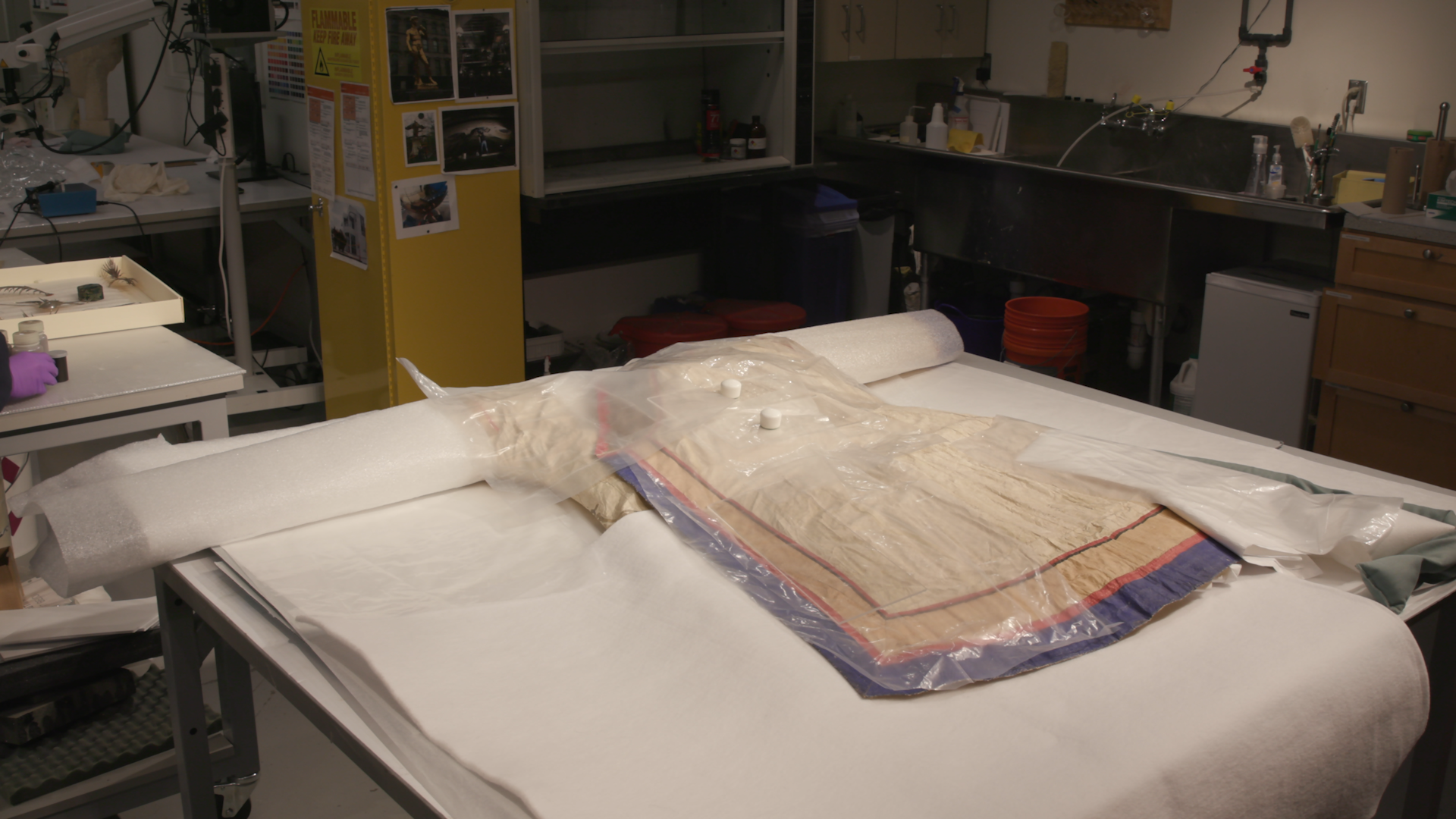 To do that, she used Gore-Tex, a material that allows water vapor to pass through but not liquid water. She placed sheets of Gore-Tex over the creased areas and then applied moistened blotter paper on top of that. Finally, she covered the blotter paper with poly sheeting to ensure the moisture moved directionally: gently penetrating the skin rather than evaporating away.

One of the Nivkh coats is older than the other and shows more signs of wear, including more than a hundred small tears and holes that needed to be reinforced before the coat could be safely displayed. To repair the tears, Murray used color-matched Japanese mulberry paper, which has about the same thickness and flexibility as the fish skin,. 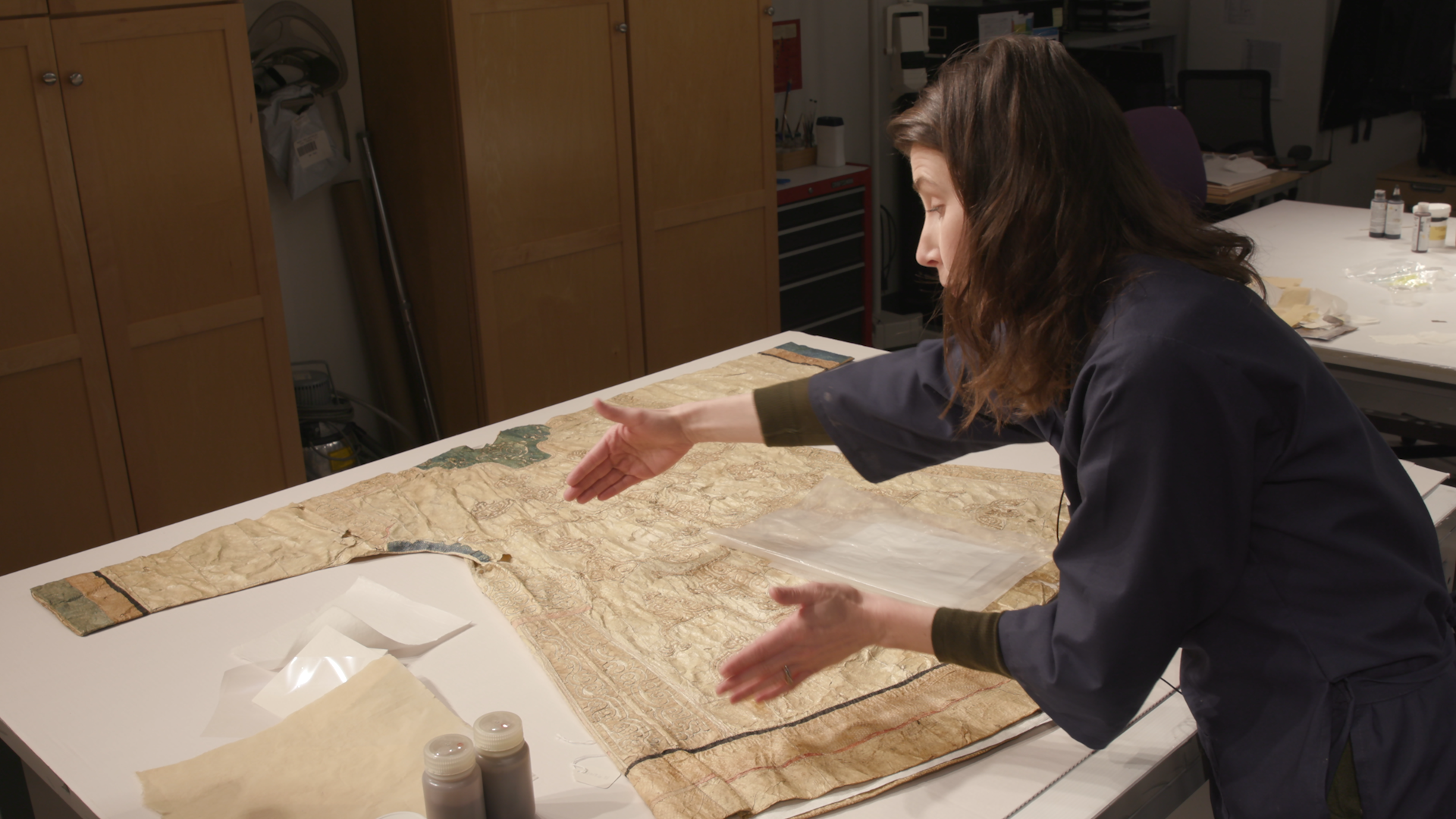 Spending so much time with an artwork provides opportunities for deep looking and learning. Murray says, “When you look closely at how this coat was made you’ll notice that it’s pieced together from a series of tapered skinny rectangles. You can see the scale pattern of the fish itself on each section and can start to visualize how these pieces of skin would have been cut and processed.” She notes that the scales vary from one part of the coat to another—small and tight along the hems and armpits, much larger on the body of the coat—suggesting the makers combined different sizes of fish or maybe even different species, like carp and salmon. “We haven’t done analysis to confirm,” she says, “but you can learn a lot just by looking closely.” 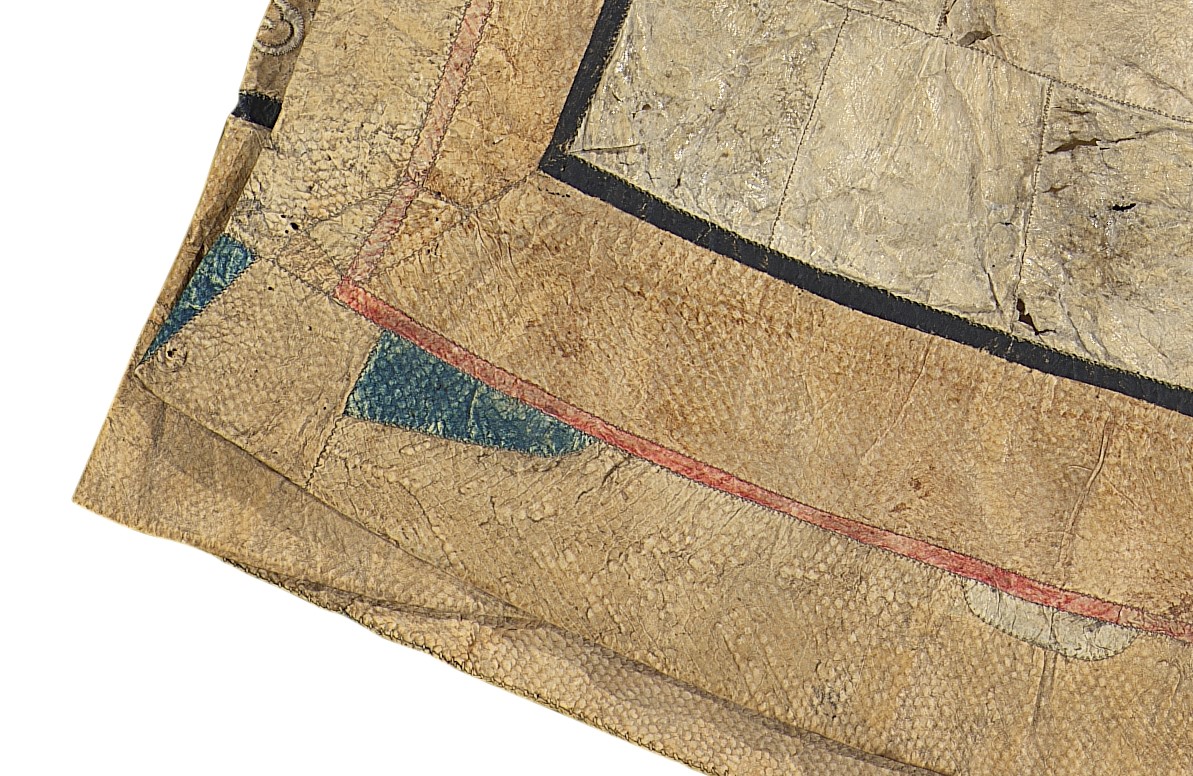 Looking closely at one coat also revealed some historic repairs that provide tantalizing evidence about its original appearance. Along the lower hem, which is tan, Murray noticed a blue leather patch over a hole. Wondering why someone would use a contrasting color to make a repair, she suspects that the hem was originally blue itself, but dyed with colorants that have faded. The patch may have been colored with a pigment or dye that proved more color fast over the years.

These photos show one of the two coats before and after conservation. Cleaned, relaxed, and repaired, the coats can now be safely handled and displayed, making them newly accessible to the public as objects of wonder, admiration, and study.

Sudha Rajagoplan, “Layers of Meaning: Clothing on the Amur,” Digital Publications of the National Museum of Ethnology, Leiden, Netherlands, 2001