Confronting the legacy of looting: From colonialism to Nazis, Mia is reckoning with the ancient problem of plunder

In February 2007, a UNESCO official named Alain Godonou gave a speech in which he concluded, with some back-of-the-envelope math, that “90 to 95 percent of African heritage is to be found outside the continent in the major world museums.” Godonou is now the national director of museums in Benin, and his claim has held up. It was affirmed most recently in a galvanizing 2018 report on African art abroad, which determined that “whereas many other regions of the world represented in Western museum collections are still able to hold onto a significant portion of their own cultural and artistic heritage,” sub-Saharan Africa has been able to retain “almost nothing.”

Most of this heritage, from royal treasure to sacred sculptures, left the continent in the late 19th and early 20th centuries, during the so-called “scramble for Africa” among the European colonial powers. Many objects were taken legitimately, as gifts or purchases; much was taken as loot. As the influential English judge Robert Phillimore determined in 1854, “all civilized states” would agree that “the acquisitions of war belong to the state.” In other words, finders keepers.

Very little has been returned. The 2018 report, which was commissioned by the French government and written by economist Felwine Sarr and art historian Bénédicte Savoy, noted that African nations have been calling for the restitution of cultural property since at least 1960, when many won their independence. Now, the scholars argued, the permanent restitution of all African patrimony seized without consent has become a moral imperative. No more loans, no more excuses. 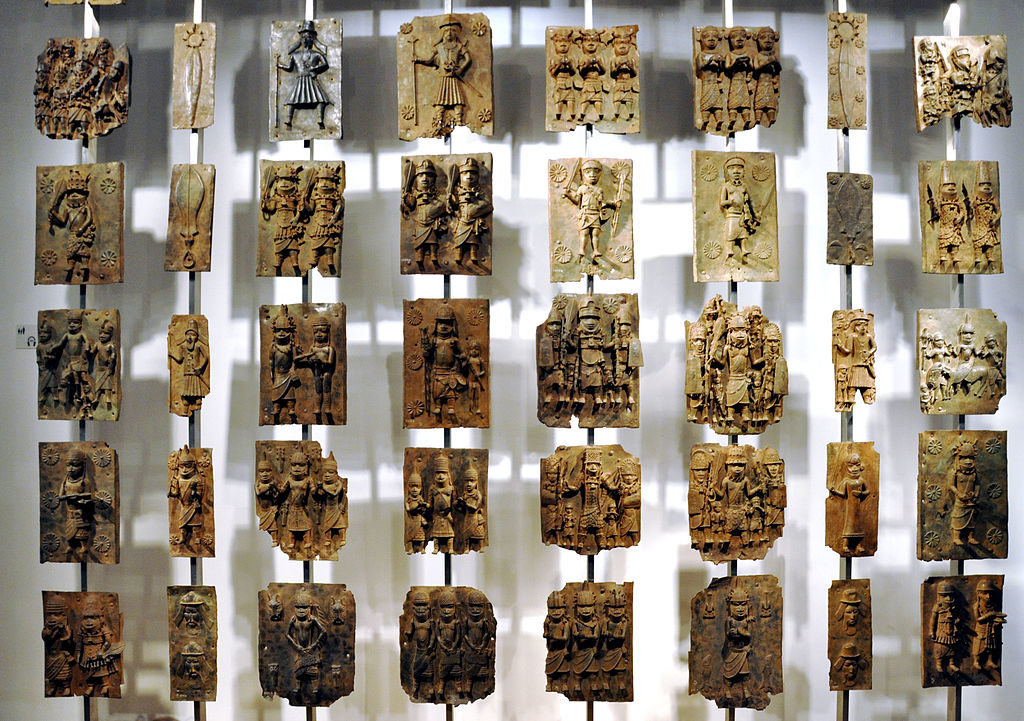 Cast brass plaques from the Kingdom of Benin, on display in the British Museum.

“To fall under the spell of an object, to be touched by it, moved emotionally by a piece of art in a museum, brought to tears of joy, to admire its forms of ingenuity, to like the artworks’ colors, to take a photo of it, to let oneself be transformed by it” are experiences, wrote Sarr and Savoy, that “cannot simply be reserved to the inheritors of an asymmetrical history.”

Jan-Lodewijk Grootaers, the curator of African art at Mia, says the goal of restitution should in fact go beyond the return of loot. “War booty, stolen art, sacred art—these things should be returned,” says Grootaers. But so should archives and photographs taken without permission in the colonial era, he says. They, too, comprise a people’s patrimony. And then there’s the less material, if no less important matter of decolonizing Western perspectives.

Until fairly recently, after all, the prevailing Western view was that most non-white societies were primitive and had no real history—they were stuck in time and place. Sub-Saharan African art, once museums began to collect it at all, was often displayed separately from Egyptian art, which was perceived as more sophisticated. Indeed, only a few places in sub-Saharan Africa were thought to produce material worth collecting: the places that did not appear to have changed.

“For a long time, curators only wanted ‘pure’ African art,” Grootaers says. “The idea was that these cultures don’t change. And if they do, it’s for the worse.”

To decolonize, then, is to understand that restitution is not as simple as emptying one museum and filling up another. Countries have changed, cultures have changed. “Complete restitution has to be in dialogue,” Grootaers says. “What do countries want and need?”

Looting and the Law

Looting, plundering, sacking—whatever you want to call it, the theft of valuables has accompanied war for perhaps as long as people have warred. The first known looting during conflict was around 1120 BCE, when the Elamites defeated the Kassites in ancient Mesopotamia—modern-day Iran—and carried off a stele depicting an earlier empire’s victory. (The stele is now in the Louvre Museum, in Paris.) Indeed, the English term “loot” comes from the Hindi “lut,” meaning stolen property, and dates to the 1800s, when the British were solidifying control of India. That a society subjugated by the British had the perfect word for what was happening to them is as ironic as the fact that the British looted the word itself. 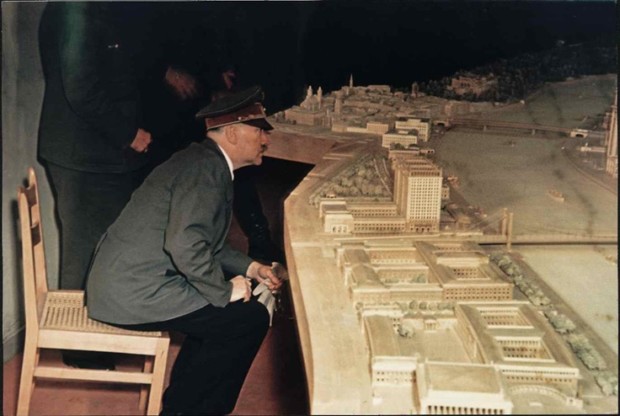 Adolf Hitler examining a model of Linz, Germany, where he planned to build a massive museum of looted art.

More recently, the Nazis systematically looted the art of conquered cities in hopes of establishing a massive Führermuseum, showcasing the masterworks of the Western world, or at least the ones approved by Adolf Hitler. His henchmen took their share, too: Hermann Goering visited the Jeu de Paume museum in Paris some 20 times after the fall of France, and eventually seized hundreds of works for himself, attaching two cars to his personal train to carry them off. By the end of Word War II, in 1945, the Nazis had confiscated an estimated 5 million artworks.

Most of the looted artworks were repatriated shortly after the shooting stopped, by the so-called Monuments Men, an American-led unit of art experts charged by General Dwight D. Eisenhower with preserving this patrimony “as far as war allows.” But thousands more works remain in public or personal collections around the world, knowingly or not. Depending on the work, the owner, and the paper trail, looted art can be hiding in plain sight.

In 2008, Mia returned a painting by the French artist Fernand Léger that had been taken by the Nazis from the mansion of a Jewish collector on the outskirts of Paris. The collector died shortly after the war, and by the time that Mia acquired it from a New York dealer, in 1961, its provenance had been obscured. After Mia was contacted by the collector’s heirs, it took several years of research to conclude the painting had indeed been stolen more than half a century earlier.

If it’s difficult to know what you have, when it comes to art caught up in conflict, it’s also difficult to know what you’ve lost. In 1897, British forces sacked Benin City, the capital of what was then the Kingdom of Benin, now part of Nigeria—retribution for the killing of a party of Britons a few months before. (Never mind that the party was plotting to overthrow the oba, or king.) The Benin Punitive Expedition, as the British attack was called, destroyed much of the capital. The oba fled, his palace was torched, and almost everything of value was hauled off to England in perhaps the most infamous looting of the colonial era. The only record left behind—the only description of what had once existed there—was memory.

Benin City was sacked two years before the Hague Convention of 1899, the first international attempt at regulating the conduct of war, which prohibited the “seizure of, and destruction, or intentional damage done to such institutions, to historical monuments, works of art or science.” It wasn’t until the 1930s that Nigerian scholars began to compile a history of their artistic heritage, piecing together European records with the memories of elders born before the British takeover.

That history remains far from complete. Some 4,000 objects were taken in the Benin Punitive Expedition, and perhaps many more, from carved elephant tusks to wooden heads. They are collectively known as the Benin Bronzes, after the sensational find of about 900 brass plaques that once adorned the royal palace, memorializing ancient exploits in battle. When they reached England, they were quickly dispersed. About a third of the bronzes went to the British Museum and other institutions. Officers took their own trophies. The rest was auctioned off to defray the mission’s costs.

The largest share of bronzes are in London and Berlin. But there are pieces scattered throughout the world, along with legitimately obtained artworks from the Kingdom of Benin. And in many cases, including several works at Mia, it can be hard to tell the difference.

The Goal of Restitution

When Grootaers came to Mia, in 2008, he and a team of Mia colleagues began thinking of how to reconstitute the museum’s African collection for display. After much deliberation, including the advice of local African immigrant communities, they settled on an approach that, among other things, recognizes the currents of commerce and geopolitics that have long swept the continent, spreading artistic influence from one area to another and across the world. It shows that Africa, even more than most regions, has never been stuck in time and place.

An aquamanile, or water pitcher, in the form of a leopard, made by the Edo people of the Kingdom of Benin. Collection of the Minneapolis Institute of Art.

Prominent in the new displays are three objects from the Kingdom of Benin that may or may not be related to the Punitive Expedition. One is a water pitcher in the form of a leopard, made of bronze and dating to the 1700s. Many such pitchers, or aquamaniles, passed through the Benin court, for obas to use during hand-washing ceremonies. This one was part of a pair given to the emperor of Germany in the 1910s. He gave them to his doctor, who gave them to a museum in Munich, which sold one to a dealer, who sold it to Mia in the 1950s. According to the museum in Munich, the pair were not part of the Punitive Expedition.

Mia also has a bronze head, commissioned by an oba to honor his predecessor, with an opening in the top to hold a carved elephant tusk. It was acquired in 2007, a year before the arrival of Grootaers, who says more research is necessary to establish its provenance. The third object is in fact a royal tusk like one that would have been held by the head, carved in the 1700s with the exploits of kings and commanders, including encounters with Portuguese soldiers. It was acquired in 1956 and may well have been part of the Punitive Expedition, says Grootaers, but this isn’t certain. Objects from the Kingdom of Benin disseminated for any number of reasons, including trade or as diplomatic gifts. Grootaers is currently working with experts on establishing the tusk’s provenance.

Mia opened its new African galleries in the fall of 2013. Almost exactly four years later, French President Emmanuel Macron, speaking to university students in the former French colony now known as Burkina Faso, called for the speedy restitution “of African heritage to Africa.” The following year, Sarr and Savoy came out with their recommendations for returning objects. And a consortium of Nigerian representatives and European museum officials, called the Benin Dialogue Group, agreed to loan African art in Europe—including Benin Bronzes—to a new museum in Benin City, slated to open in 2021.

Any French restitution would require a change in law. And construction of the Benin museum has yet to begin—the opening has been pushed back to 2023. So far, only one African object, a sword from Senegal, has actually been returned—on loan from France for five years. 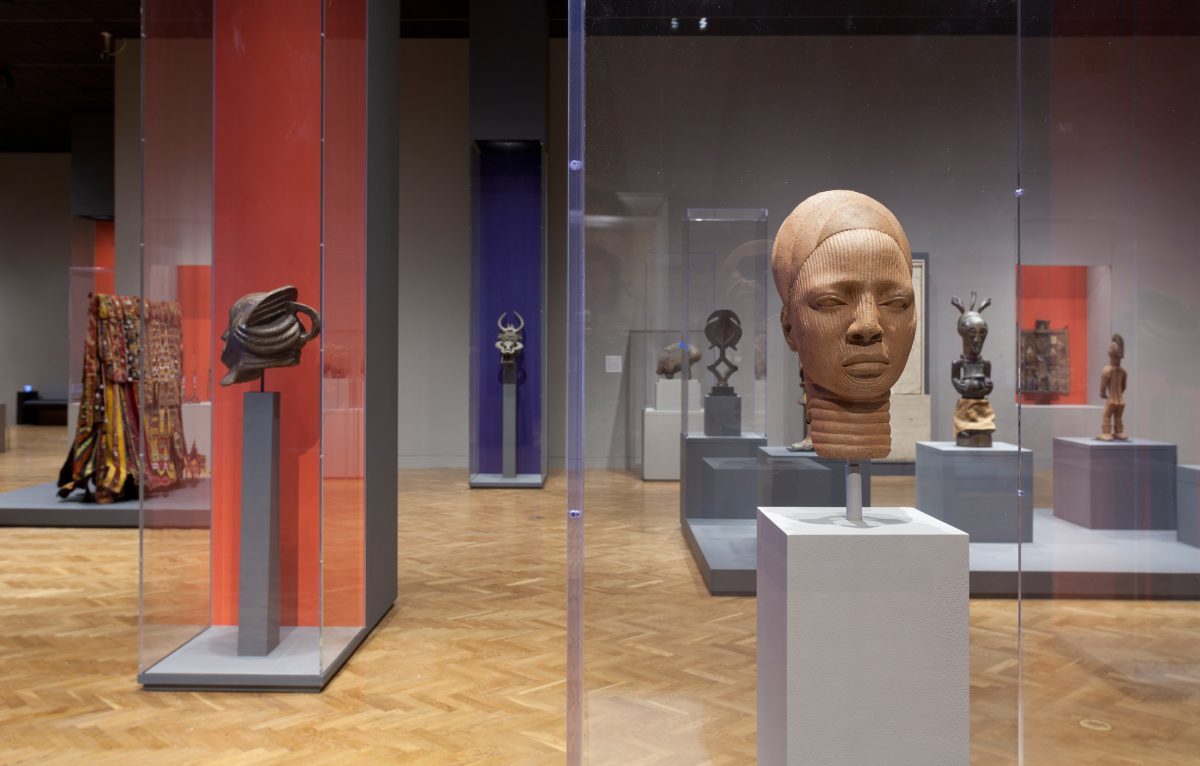 A view of the African galleries at the Minneapolis Institute of Art when they reopened in 2013.

But Grootaers is hopeful that a new understanding of African art, in which Africa is seen as dynamic and engaged with the world, can help bring about real decolonization. For too long, he says, the conversation around decolonizing has veered toward the extremes: accusations that all African objects in museums have been stolen or, on the other hand, that Africans wouldn’t take care of them if they were returned. The honest approach, says Grootaers, would be to work in good faith and ultimately acknowledge an entangled past.

“With colonialism, both countries are involved in the history,” he says, noting the history of Nigeria is also, at some point, the history of Britain, and vice versa. “It’s necessary to confront the past in a cooperative way.” Only then, he says, can both parties move forward.

Top image: British colonial forces with loot from the royal palace in Benin City during the Benin Punitive Expedition in 1897.