Maybe you are still getting through this pandemic by distractibaking. Or maybe you have decided that bread is over and have turned to knitting, crochet, and other crafts as a way to calm your nerves. If either—or none—of these applies, you might want to consider braiding challah, a practice that brings the culinary and fiber arts together in one therapeutic pastime that lets you have your craft and eat it too. You might call it craftibaking.

If you are new to the joys of braiding challah, some bite-sized tutorials courtesy of Rabbi Alexander Davis from Beth El Synagogue in St. Louis Park will get you started. I met Rabbi Davis last year as I planned the display for a newly acquired sculpture, The Sabbath Now (shown above), which is still on view, in the dark, behind Mia’s closed doors. This work is the creation of fiber artist Norma Minkowitz, best known for her transparent crochet sculptures. The Sabbath Now, along with its companion, The Sabbath Then, which belongs to the Museum of Fine Arts, Boston, explores the tradition of the Jewish Sabbath from ancient times when it was associated with Temple worship to the domestic family meal that continues today.

Though I initially consulted Rabbi Davis for help with editing the gallery panel text, he kindly offered his assistance with a public program we held last October in celebration of the new installation. Along with Norma Minkowitz’s discussion of her work, Davis suggested he offer some lessons in challah braiding. Given that The Sabbath Now sculpture includes two crocheted loaves of braided challah, the connection seemed clear. And when Davis explained that he liked to weave theological discussion throughout his cooking demonstrations, his educational approach seemed especially apt. Minkowitz was raised in a non-religious Jewish household where Sabbath celebrations were uncommon. Her process began with research, and she approached her sculptures as an outsider curious about a custom that was at once familiar and foreign. 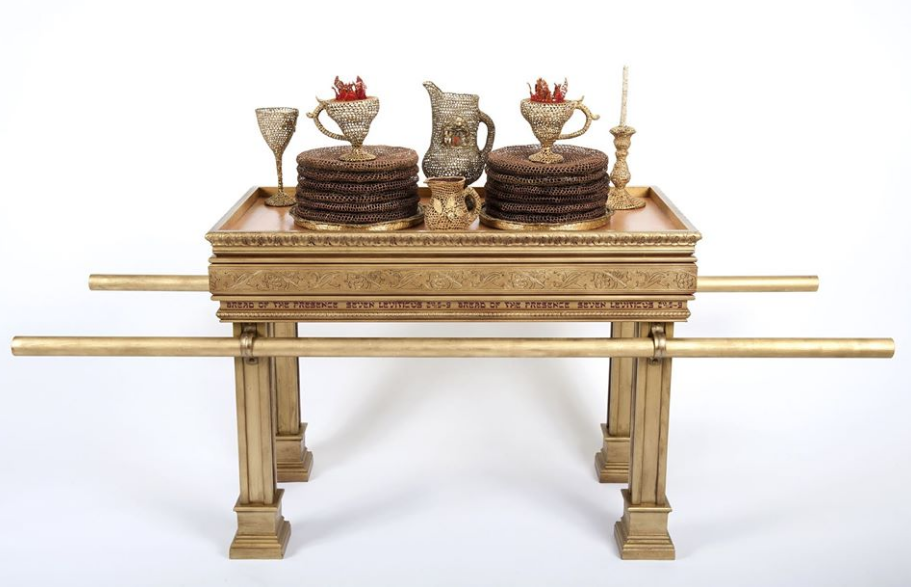 In our contemporary moment, when large public gatherings are prohibited in places of worship and everywhere else, challah may be even more resonant. According to Davis, Jewish worshipers in ancient times were required to give a portion of dough to priests as a form of tax, while the priests in turn offered stacks of flatbreads called matzot to the congregation on the Sabbath—as depicted in Minkowitz’s The Sabbath Then. But after the destruction of the Second Temple in Jerusalem, nearly 2000 years ago, the baking of bread for holy day celebrations shifted from the temple to the home.

Today, the ancient practices of public offerings and sharing bounty are still acknowledged in domestic contexts by twisting off a small portion of the challah dough—a morsel called the “challah”—before shaping and baking it. That bit is placed in the oven to burn, symbolically destroyed in keeping with the requirement of the temple tithe. As Rabbi Davis points out, this act also prompts generosity in a broader sense: “When I make challah, I get so excited to dig into the dough—my first impulse is to receive. But tearing off that first portion reminds me of the commandment to give.”

The shift from unleavened matzot to the raised braided challah common today happened during the 1400s in Eastern Europe, as Ashkenazi Jews adopted local baking traditions. There were no rules around braided designs, though the numbers of strands often held religious significance. By and large, people improvised.

Two forms of challah dough, as prepared by Rabbi Alexander Davis: the classic round on the left, the braided version on the right.

If you feel like improvising, here are some quick tutorials courtesy of Rabbi Davis, followed by his favorite challah recipe.

First, a quick lesson in rolling out the challah dough:

Next, the classic three-braid challah:

Now, take things up a notch with a five-braid challah:

A variation on the five-braid challah:

The six-braid challah (yes, you can do this):

Finally, the classic circular challah, now most often made for Rosh Hashanah:

Pinch of sugar or drop of honey

After 20 minutes, Rotate pan & brush with additional egg wash as necessary. Done when sounds hollow and is nicely browned.

Note: you can make the dough and let it rise, refrigerated overnight. In the morning, shape and let rise. This rising will take around 11/2 hours.