In 1990, Cy Thao decided to paint the history of Hmong involvement in the Vietnam War, the secret war in northern Laos that killed tens of thousands of his people. He was at the University of Minnesota–Morris then, studying art in a small rural college town, and the timing seemed right. “The war stuff was still fresh in my mind,” Thao recalls. “I was poor, I had no debt, I just made a commitment myself that I was going to tell this story.”

Thao’s family had fled Laos in 1975, at the end of the war, and lived in a refugee camp in Thailand until coming to Minnesota in 1980. He grew up in North Minneapolis and the northern suburbs, became an Eagle Scout, and earned his way into Morris, a fairly selective public university. But the war had left deep scars on him and other Hmong immigrants, and few Americans knew it.

“I remember having this conversation with my art professor, about the story of the Hmong people,” Thao says. “You’re in Morris, Minnesota, in 1990—it was new to him. He was kind of shocked by how graphic and tragic it was.”

Thao painted the series in a simple, illustrative style, a deliberate choice that evoked the story tapestries made by Hmong women to pass down history. It also served to make the violence more symbolic than gory. “The events are so graphic that if you depicted them in a realistic style it would be hard for the viewer to really engage,” Thao says. “I was thinking about Picasso, his Guernica painting about the Germans bombing Spain. In the Cubist style it’s not as graphic, but you look deeper into it the stories start to come out.”

Thao made 10 paintings like this. And then, he says, “the story kind of grew. … I figured, let’s add more panels to it.”

“I kind of randomly said, ‘I think 50 pieces will be enough,'” he says. By the time he finished, in 2001, the narrative had expanded to cover the entire history of the Hmong people, from their original homeland in China to their settlement in Minnesota after the Vietnam War. He called it The Hmong Migration.

“Most people, before they die, want to leave something,” he says. “When I created the series, I was thinking about my kids. Because I had a hard time adjusting to who I was, and I thought that people like my children would have a hard time as well. But I was also trying to reach people like my professor who didn’t know anything about the Hmong community. So there were really two goals: to teach Hmong kids about their own culture and to teach the non-Hmong about what we’d done.”

When Thao finished, he pitched a big tent in the parking lot of a grocery store, in the Frogtown neighborhood of St. Paul. Thao had graduated from Morris several years earlier, joined a theatre troupe in the Twin Cities, and turned the troupe in a full-fledged arts organization that he ran for a few years. The painting had happened quietly, in the background, but now he was ready to reveal what he’d been up to.

He had built easels to display the paintings, and he set them up in the tent in chronological order. He showed them for one weekend only. Hundreds of people came by. “Kids came in, then they got their mom and dad to come,” he recalls. “It was a pretty emotional time for people.”

A few years later, in 2004, Thao was invited to show the full series at the Minneapolis Institute of Art, through the Minnesota Artists Exhibition Program (MAEP). After the show, Mia acquired the series. Now, for the first time in 15 years, a large number of the paintings are once again on display at Mia, as part of its exhibition “Artists Reflect: Contemporary Views on the American War.”

But a lot has happened since then. In 2004, Thao was serving in the Minnesota Legislature, as the first Hmong member of the Minnesota House—and only the second Hmong legislator in the country. Today, he’s living in Florida, and when I reached him by phone, he was in his car, driving to Georgia on business.

They Didn’t Want Us to Raise Hell

Thao was in the middle of painting the series, in 1998, when the Hmong community hit a crossroads. Tom Barnard, a popular shock jock on KQRS in the Twin Cities, had made racist comments on the air after a 13-year-old Hmong girl in Wisconsin was accused of killing her baby. “Either assimilate or hit the … road,” Barnard said. Young Hmong people protested, and Thao was among them.

He helped lead a voter registration drive in the Hmong community, which had not been politically active. “A lot of the older Hmong were scared because we’d just gotten kicked out of Laos,” he says. “They didn’t want us to raise hell and get kicked out of Minnesota, too. But people my age, we had grown up here and said it’s time to think for ourselves, to speak our minds.” 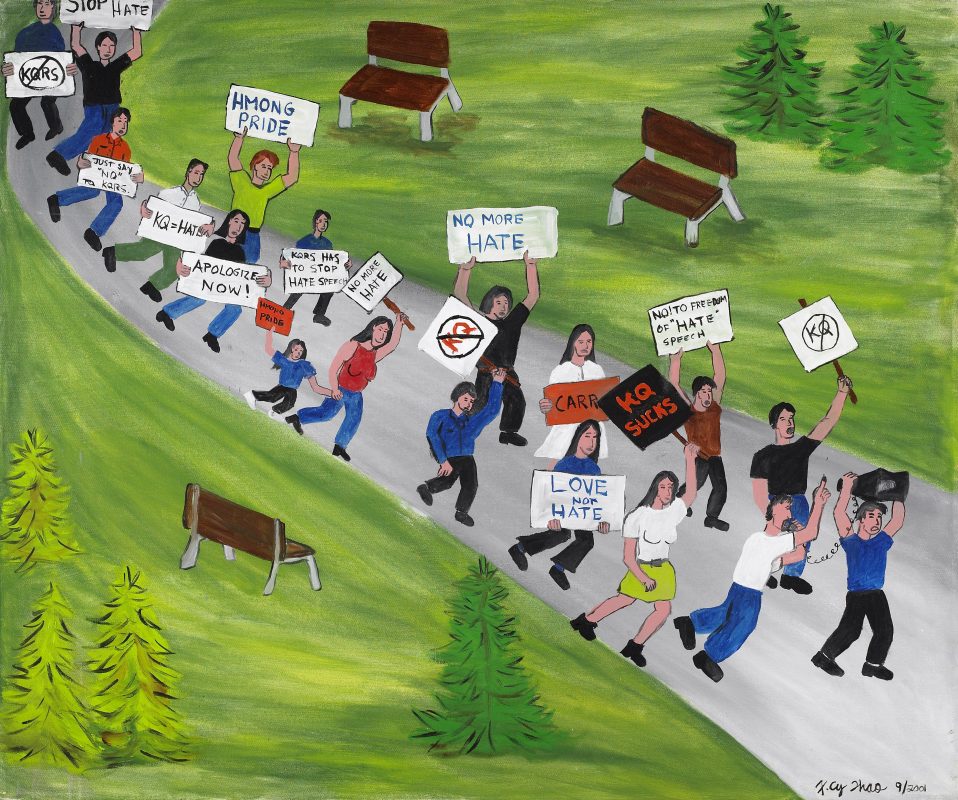 An image from “The Hmong Migration” showing a protest after racist comments on Twin Cities radio station KQRS in 1998.

Then Thao ran for office himself. He fell short on his first attempt, but won in a landslide in 2002, representing the heart of the Hmong community in St. Paul. He served until 2010.

Midway through his legislative career, he and his wife had decided to go into business, opening an elder care facility for aging Hmong women in St. Paul. His wife’s grandmother had been getting on in years, and there was no appropriate facility for her to move into, a woman who didn’t speak English and had eaten mostly Hmong food her entire life. Thao and his wife expanded the business again and again, eventually serving a more diverse clientele that reflects its diverse neighborhood. And then they began making trips to Florida.

This month, they sold the St. Paul facility and are now living full-time in Bradenton, just south of Tampa. They hope to open other facilities in the Southeast, potentially in Georgia. 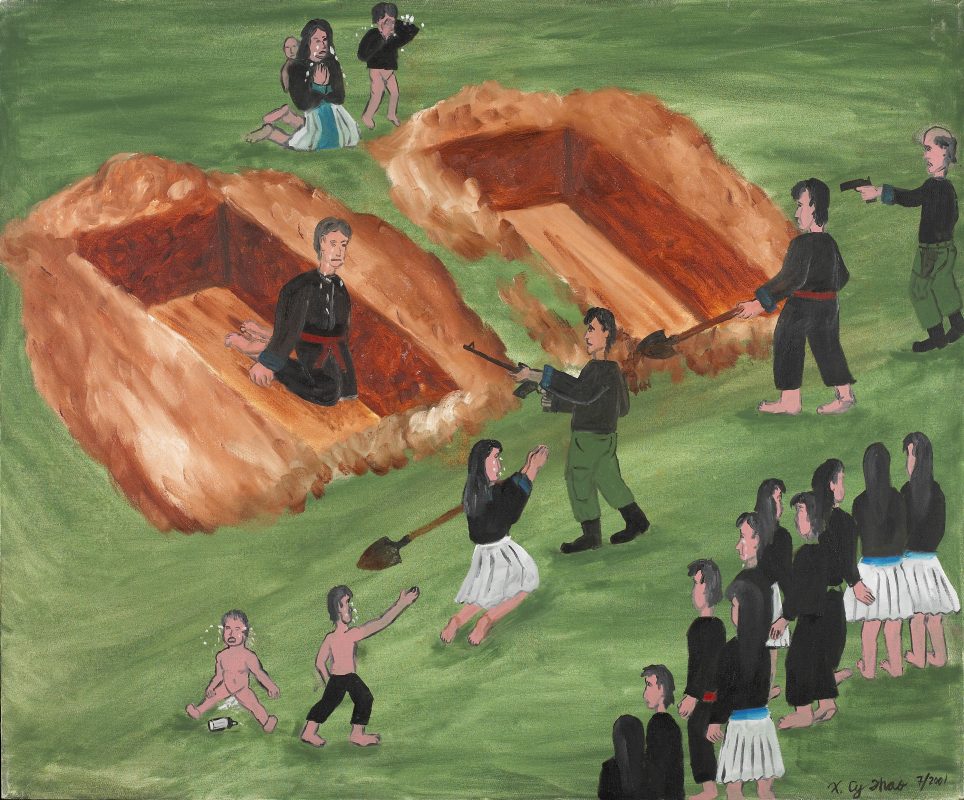 An image from “The Hmong Migration,” depicting the murder of Thao’s uncles.

It’s a long way from Laos and the memories Thao depicted. In the series, he says, “the piece that is most emotional for me is one with two holes where men have dug their own graves, and there’s a guy with a pistol to their heads. Those guys are my uncles.”

Thao’s father had acted as a kind of protector for his relatives. When he left Laos, in 1975, his relatives were accused of being communists. One day, when Thao’s uncles had gone to a neighboring village for salt—an area controlled by communists—they were captured, taken to the woods, and shot.

Thao’s epic depiction of this violent history has now become the reference he hoped it would. The paintings have been collected in a book, and are widespread online. “Every now and then I’ll be watching a video on YouTube and a picture from the series will pop up,” he says. “I kind of just let the images go out into the universe.” His own nephew, he says, who had seen the paintings for much of his life, didn’t make the connection to his uncle until Thao gave him the book. “I’m okay with that,” he says, “the whole premise was to put this story out there.”

If the series captures an epic history, hundreds of years in the making, it is also a moment in time—the 1990s—when the Hmong were establishing themselves in yet another home. “We were still trying to figure out how we fit within the United States, within that culture,” Thao says.

Now things have changed. Many of Thao’s Hmong friends and family are Vikings fans and deer hunters and also less self-conscious about their background. “We’re not trying to figure out how we fit anymore,” he says. “We’re secure in ourselves.”