Divine threads: The making of an extraordinary robe in “Dressed by Nature”

If you were an Ainu robe maker, how would your design process begin?

Would you draw swirls and biomorphic shapes on your precious trade cottons? Or would you just start cutting?

Would you opt for embroidery floss with POP!, thinking “That red thread really works, especially if I make crawling oho chain stitches to contrast with a navy couching ikarari stitch”?

At what point would you reach for the accent color of shell-pink thread for extra petal-power punch?

Countless decisions and painstaking care go into the making of any handmade garment. But Ainu ceremonial robes, like this one, present another cosmos of possibility. Their complex, organic, roiling design motifs reflect a continuous 10,000-year cultural tradition, possibly incorporating such diverse influences as the aesthetics of the Jōmon people of ancient Japan, the ivory carvings of Old Bering Sea Inuit, and the heraldic compositions of Northwest Coast Indians. 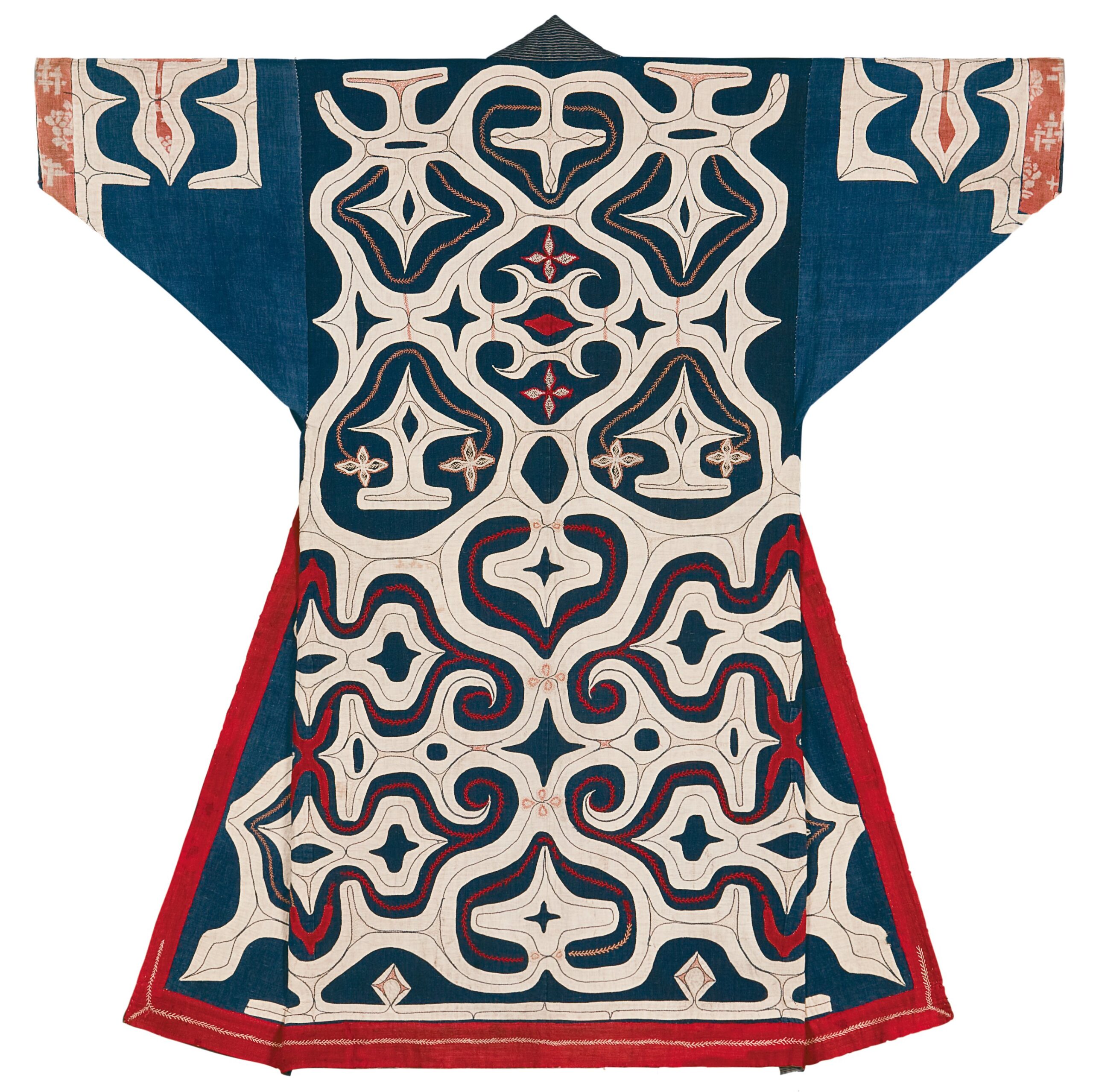 This robe is on view in “Dressed by Nature: Textiles of Japan” in Target Galleries, along with 14 other Ainu robes in two galleries devoted to them. Thanks to the 2019 purchase of the Thomas Murray Collection of textiles, Mia now owns 25 Ainu robes, making the museum the largest repository of such robes outside of Japan.

“This striking robe is going to be a highlight in this extraordinary exhibition,” says Andreas Marks, Mia’s Mary Griggs Burke Curator of Japanese and Korean Art and director of the Clark Center for Japanese Art. “It presents an aspect of Japanese art we have never shown at Mia before.”

The Ainu (pronounced EYE-noo, “human” in the Ainu language) are Indigenous people from the northern region of the Japanese archipelago, particularly Hokkaido Island, near Russia. In Ainu custom, women make these ceremonial robes, called kaparamip. Decorated with embroidery and white appliqués in symmetrical cutout patterns, they’re meant to be worn only on special occasions.

Scholars posit that the appliquéd patterns echo the tattoos—on lips, hands, and arms—for which Ainu women were once known. By hand, stitch by stitch, the seamstress sews her intention for the protection and affection of the garment’s wearer.

• The maker stitched together pieces of white cotton to form one large appliqué covering the entire garment.

• An exacting symmetrical decoration attests to the skillfulness and aesthetic sense of its creator.

• Design patterns traded down through generations served multiple purposes: to be beautiful, to protect the bearer, and to please the kamuy (gods).

• Ornamentation was applied to the back and to vulnerable edges and openings to prevent evil spirits from entering.

• The sleeve openings and the edges are embellished with pieces of red-dyed cotton.