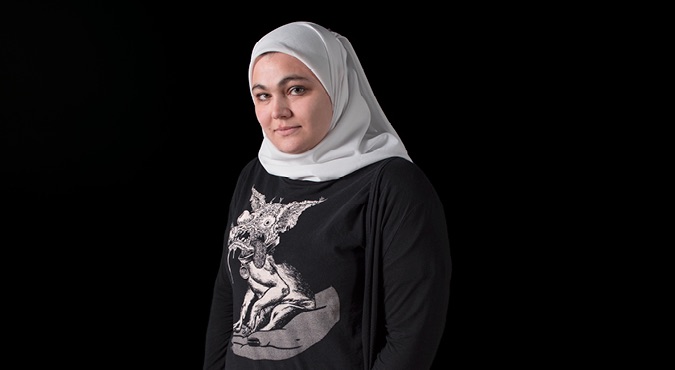 When I first met Essma Imady, she was pacing through a mostly empty gallery, glancing among her unassembled installation pieces, and occasionally fidgeting with her singular dinosaur earring. Comfort Object, from “Thicker than Water.” Imady lists the materials as a teddy bear and “a mother’s weight in lead.”

Her art was scattered along the perimeter of the long, rectangular gallery, most of it unfinished. A large, white teddy bear sat propped against a white wall; it would later be ripped open, filled with lead, and titled Comfort Object. On the opposite wall lay an assortment of clear glass ornaments; soon, the ornaments would be connected by wire and suspended from the ceiling to resemble a child’s mobile—though some of the glass would be intentionally broken below. Imady dubbed this installation Fragile.
When we met, a week before her exhibition, “Thicker than Water,” opened as the current Minnesota Artists Exhibition Program (MAEP) show at the Minneapolis Institute of Art, she was clearly feeling the tension of the whole experience, an anxiety that had been building for months. Knowing that her deeply personal art—loaded with ironies like a lead-filled comfort object and a dangerously fragile mobile—would soon be on view to the public was overwhelming. Though, she confessed to me, “I’m just an anxious person.”
In fact, Imady used her stress and anxiety to fuel the creation of this show. By exposing her own uncertainties and struggles, she enables viewers to sense that they have connected to the work on a personal level, a connection she hopes will persist, sprouting new conceptions about these ideas, long after her exhibition is gone.
From Syria to Minnesota
“You probably want me to say I started art at age 3, when I started painting Picassos,” Imady joked. But her origins are not that simple.
Imady grew up in Damascus, the capital of Syria, one of the oldest consistently inhabited cities in the world. Her mother worked as a tour guide, often steering American and British tourists through the city’s layers of artistic and architectural history dating back thousands of years.
Despite this history, Imady never had access to art classes through Syria’s public schools. She didn’t consider herself an artist in her youth, though she often crafted artwork for friends and family. After high school, Imady decided to pursue higher education, but a career in art would not cross her mind until much later.
In Syria, Imady explained, “You don’t go to college and decide what you want to do. Before you go into college you have to pick which one you want to go to. Chemistry college, medical college, and then that’s it. You don’t have the space to decide.” Having never considered art as a possible career path or even much of a personal interest, Imady enrolled in a chemistry college.
“I try to control it now, but back then I was a people pleaser,” Imady revealed, laughing quietly. “So since I was a people pleaser I went to chemistry college for three years and it was terrible! It wasn’t terrible for everyone, but it was for me. Chemistry was just not an option.” Eventually she felt compelled to leave the school, for her own well-being.
She was faced with the decision to either drop her pursuit of a college degree entirely or start over at a completely new school. Fortunately, the Syrian government had recently allowed the first few private universities to open in the country. Thanks to her father’s connection to one of these new universities, near Damascus, Imady became aware of an art program the school was offering and enrolled. “So,” she answered more confidently, “it all started from there.” Coming-Home Outfit, from “Thicker than Water.”

Syria’s civil war, however, soon escalated in Daraa, where her new university was located. Tanks could be seen from her classroom windows. When her husband received a Fulbright scholarship to St. Cloud State University, in Minnesota, Imady jumped at the opportunity to leave the violence and complete her education in the United States.
She received her BA from St. Cloud State and was accepted to a Master’s program at the Minneapolis College of Art and Design. Then she discovered she was pregnant with her first child, and anxiety struck again. Imady struggled to see how raising a child and going to school would work together. She deferred her acceptance for a year, but with no real intention of attending in the future.
After the birth of her daughter, Imady told me, she experienced intense anxiety around parenthood and fell into a bit of an emotional slump. Though she thought pursuing her education could be a great way to put her back in a positive headspace after childbirth, she was still doubtful of her ability to handle the dual responsibilities of motherhood and an education.
“I just had a kid!” she exclaimed. “I thought it was impossible for me to go to grad school. But my mom said, ‘Just do it, maybe you’ll figure it out.’”
Explaining war
Imady earned her MFA in 2016, and Thicker Than Water stems directly from her time at MCAD. In her final semester, while considering topics for her final thesis, she asked the question, “How do you explain war to a 4-year-old?” And although she ultimately pursued a different topic for her thesis, the question continued to burn in the back of her mind.
Receiving Blanket, featured in “Thicker than Water,” was the first piece inspired by that prompt. The soft throw-blanket is printed with a photograph taken by a Russian drone of bombed, crumbling Syrian buildings. The piece poses a striking contrast between the comfort of a soft blanket and the harsh reality of violence and destruction still happening in Syria today.
More art followed, and in 2017 she received a Travel and Study Grant from the Jerome Foundation to continue this work in Istanbul, Turkey. There, she designed a light fixture for a mosque and studied traditional Islamic art forms.
She also visited many of her friends. They, too, had been forced out of their homes by the violence in Syria. But unlike Imady, most of her friends and family had relocated to Istanbul and started families there. Her counterparts have young children who are aware of their current circumstances, and Imady seized the opportunity to interview these children while she was still in Istanbul. As part of “Thicker Than Water,” Imady presents these interviews along with others she recorded in Winnipeg, Canada, which also has a large Syrian refugee population. The interviews primarily highlight the experiences of childhood: future goals, funny stories, family life. Many of the children in the large collage of videos smile, bounce, and laugh with their siblings. But Imady asked the children to consider their status as refugees, as well, and some of the children in the videos elaborate on their difficult journeys from Syria. Others reveal that they feel anxious at their new schools, in their new homes.
“I visualize the entire series in terms of anxiety,” Imady said of the art in the show. After having her child, Imady struggled with plenty of anxieties that all parents face. However, she began recognizing that some anxieties were more specific to her experiences as a refugee. “I wanted to touch on the anxiety of language, heritage, history, safety, comfort.”
Mother Tongue, a procession of tongues coated in letters, reflects on anxieties related to one’s first language and the struggles to learn a new one. Safety Net, which consists of a pile of faux rocks in a safety-pin hammock, hangs precariously over the heads of visitors as they enter the second gallery space and invokes anxieties about immediate safety.
However, Imady’s art is accessible to more than refugees and parents. As a practice, Imady asks her audiences to find a personal connection to the pieces and develop their analysis from a place of experience. Rather than dictating what she would like them to take away from “Thicker Than Water,” Imady hopes that visitors leave with their own ideas and meanings. Her work is not a call to any particular action, she stresses, nor is she attempting to produce the “right message.” Her artworks, she said, are simply “seeds.”
“I hope people come away with something small,” she said. “Something that, when nourished in the correct ways, could grow into something larger and could perhaps challenge a preconception or offer a different outlook. I don’t want to define what those outlooks or conceptions are. I don’t want people to assume that I am trying to define them or make a call for a specific action. I’m planting seeds.”
“Thicker Than Water” will be on view at Mia through June 24, 2018. Imady is continuing to work on other exciting projects in Minneapolis, including events at the Walker Art Center surrounding ideas of international voices and “who can speak for whom in art.”

Ashley Cope is a senior undergraduate at the University of Minnesota, studying art history and gender, women, and sexuality studies. During the spring of 2018, she served as the Weisberg Curatorial Fellow at the Minneapolis Institute of Art, where she worked with the Contemporary Art department and the Minnesota Artists Exhibition Program.