(This is a transcript of an episode of The Object podcast, produced by the Minneapolis Institute of Art and originally released on December 31, 2020. You can listen to it here.)

There are a lot of things you might want to do this New Year’s Eve. Not sure I want to know, actually. But I want you to think back to 1868. A few years after the end of the Civil War.

President Andrew Johnson had been impeached, because he wanted to go easy on the South, let the white South decide how the end of slavery would be managed. Johnson thought of himself as a friend of the common man, as long as that man was white, and he traveled the country fanning the flames of racial animus. He was impeached and then acquitted. Eighteen Sixty-Nine couldn’t come soon enough, when a great new president would take over—Ulysses “Mistakes Have Been Made” Grant.

There are a couple prints in the collection of the Minneapolis Institute of Art that came out just after 1869 got underway, in the January 9 issue of Harper’s Weekly, I believe. Prints that embodied the feeling then, and, strangely enough, the feeling now.

They’re engravings by Winslow Homer, the artist better known for his later paintings of sailors in rain-soaked slickers, tossed at sea. The painter who ran off to Maine before he was 50, and was called a Yankee Robinson Crusoe, a hermit with a brush. Back in January 1869, he was a 32-year-old on the make in Manhattan, something of a dandy with huge mustaches and a straw hat. He had made his reputation during the Civil War, embedded with Union soldiers, sending illustrations from the front to Harper’s Weekly. And now, at the dawn of 1869, he was still freelancing for the magazine, which asked him to capture the zeitgeist of the new year. 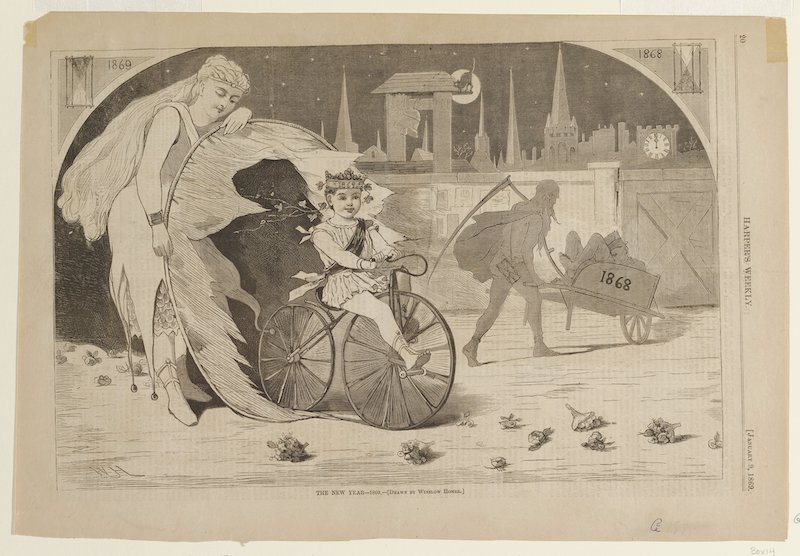 The New Year, 1869, by Winslow Homer for Harper’s Weekly. Collection of the Minneapolis Institute of Art.

In one illustration he shows the skyline of a village at night, with about seven church spires jutting toward the stars. The town clock shows midnight, and a bell tolls and a black cat creeps along the bell tower, like something magical is about to happen. In the background, old Father Time with his hourglass and scythe is carrying a wheelbarrow marked 1868. And in the wheelbarrow is an old man with a top hat. His legs crumpled up and bare, his eyes closed, his time literally up.

In the foreground, a little kid on a bicycle bursts through a paper-covered hoop, wearing a crown that says 1869. Like something out of the circus—ta-da! There’s something almost satirical about Baby New Year’s expression, a little cherubic smile, so innocent and naïve on that big wobbly bike. Like good luck, kid. Or maybe I’m reading too much into that smile. It’s probably just as innocent as it looks.

And yet, there’s Winslow Homer’s other New Year’s illustration for Harper’s Weekly 1869. It’s a scene from the long-gone practice of paying social calls on New Year’s Day. When gentlemen callers, instead of sleeping off a hangover, woke up bright and early and put on a nice tie and top hat and made the rounds of lady friends.

Newspapers at the time would even print the names and addresses of women whose doors would be open, so to speak. Miss so and so, of Apple Tree Lane, and so on, page after page. The women would put out a buffet of plum cakes and pickled oysters, maybe even buy some new furniture for the occasion.

And men had their own protocol. For one thing, keep your hat in hand, to suggest you aren’t going to overstay. And then, don’t overstay—that’s important. Don’t be that guy. Better to run out before the conversation does, and leave the lady wanting, then to hang around until the next fellow shows up.

In Homer’s illustration, captioned Waiting for a Call on New Year’s Day, a group of women in hoop skirts, hair up, in a room stuffed with paintings and sculpture, stand at the window in anticipation, watching the suitors swishing by. But one woman is seated—slouched, actually. She’s holding a slip of paper, drooping in her hand like dead flowers, as she looks away in disappointment or disgust. 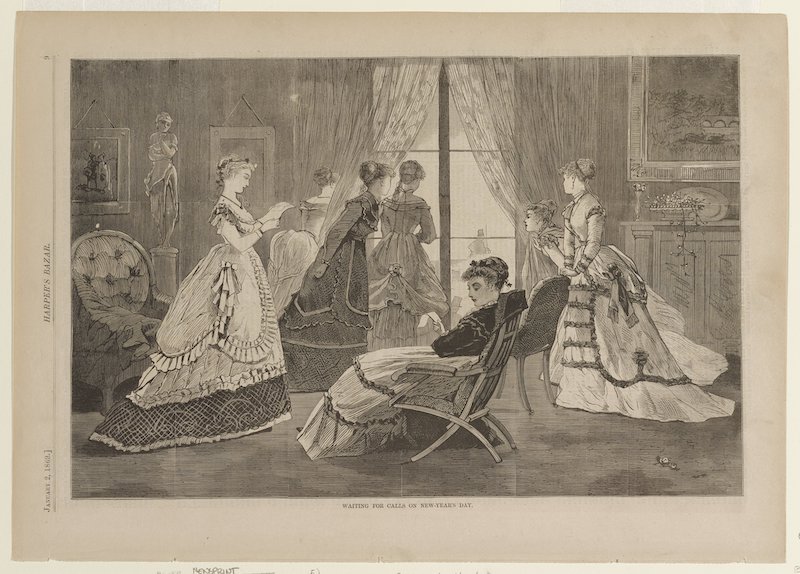 Waiting for a Call, 1869, Winslow Homer for Harper’s Weekly. Collection of the Minneapolis Institute of Art.

Homer often depicted a certain kind of young woman. Biographers have called her the Homer girl, like the later Gibson girl. Cute and frank, down to earth, full of personality and yet more of a type than real—the American girl, as she was then being defined by, well, men.

Winslow Homer never did marry, never had a Homer girl of his own. He was a lifelong bachelor, and it’s hard to know if he was unlucky in love or uninterested or what. He famously told a potential biographer, late in life, “The most interesting part of my life is of no concern to the public,” and that was the end of that—until about 20 years ago.

That’s when a cache of letters surfaced, suggesting the most interesting part of Homer’s life may well have been a charming young woman—a woman whose photo he once compared to a Beethoven symphony. A woman he spent many hours with, and sketched and painted, and offered to teach painting. A woman he courted, with the most earnest entreaties, signing off one note, “Believe me your most devoted and true and very sincere friend, Winslow Homer.”

The thing about becoming a supposed hermit is that people will look back and try to figure out how it happened.

In New York, Homer lived in the old New York University Building, on the edge of Washington Square Park. A castle of a building, in the Gothic Revival style, with an entrance like a cathedral and turreted towers in the corners. A building where Walt Whitman taught, Samuel Morse refined his electric telegraph, and Samuel Colt perfected his revolver. Homer reportedly lived in one of the towers.

An early biographer heard from a close friend of Homer’s that he had “the usual number of love affairs.” But there’s little evidence. There is some sense that he was reserved, if not anti-social exactly. Friends who made the long walk up to his apartment may have found him at his desk, working on his next illustration, admonishing the gathering—however welcome—to keep it down.

By the 1870s, he was painting the charming young woman: Helena de Kay. He painted her in a chair, a monarch butterfly fluttering near her heart. He painted her in a hammock, a couple times it seems, lovely and lost in thought. In fact, in all these pictures de Kay looks demure to a fault, which is perhaps the way a reserved fellow like Homer felt he could engage her, or any woman.

In real life, though, de Kay appears to have been no wallflower.

In 1872, de Kay met the writer and poet Richard Watson Gilder. They met in the offices of a rival magazine of Harper’s, the new Scribner’s Monthly, where Gilder was the managing editor.

They reportedly went to art exhibitions and read Dante together and Gilder wrote poems about her—love sonnets—which he published in the magazine. Stuff like, “My love for thee doth march like armed men.”

Meanwhile, there was Homer in his tower. It’s unclear if Homer ever proposed to Helena de Kay. But in 1872, he painted a proposal scene, titled Waiting for an Answer. And then, perhaps that same year, he seems to have gotten his answer. 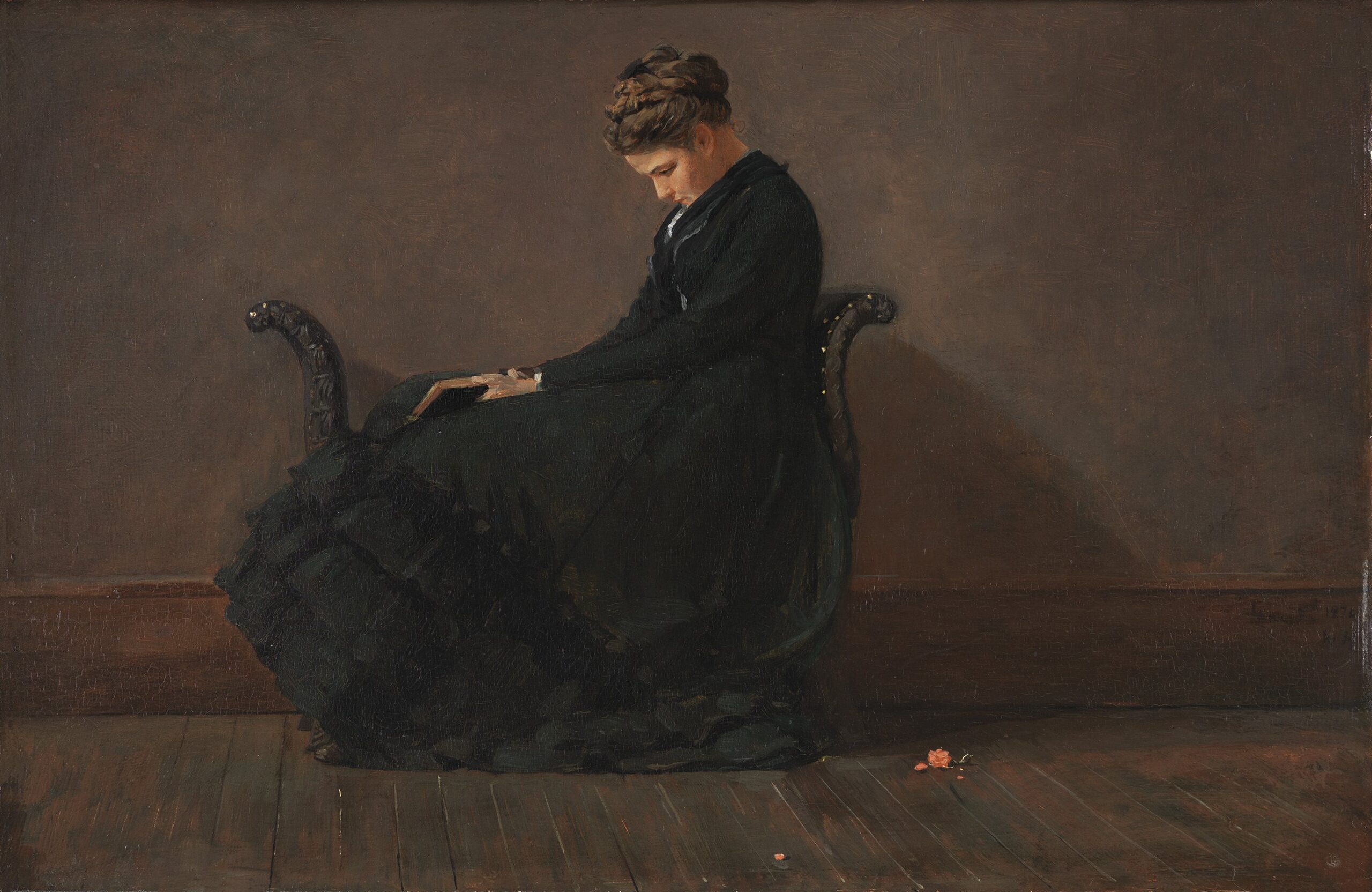 Sarah Burns, a cultural historian and professor emeritus of fine art at Indiana University, was the first scholar to write about the newly accessible letters and the proof they appear to offer—the proof that, as she puts it, “Homer was powerfully drawn to Helena de Kay.”

Writing in Antiques magazine in 2002, an article called The Courtship of Winslow Homer, she notes the change in tone between the letter from June 1872 in which he compares her photo to a Beethoven symphony and a much cooler one from later that year, in December, when he suggests that she should “limp into my studio” and take a sketch he made of her. “I am very jolly” he insists to her. “No more long faces.”

Burns has carefully analyzed a certain portrait that Homer made of de Kay, sometime in the early 1870s, “most probably,” she writes, “as an elegy for his dead romance.” Every detail seems to recount his rejection. De Kay supposedly hardly ever wore black, for example. A friend once remarked that her colors were “pure and passionate white and red.” But there she is, in Homer’s portrait, in funereal black. As Burns puts it, “She is more like a widow than a bride.”

There’s a rose, a special flower to De Kay, torn and frayed on the floor. And then there’s a book she’s holding, a possible reference to an illustration Homer had done for Harper’s back in 1868, featuring a couple in love with an open book—book with the letters W and H on it. In the later portrait, the book—like the romance itself—is closed.

Homer moved to Maine in 1883, after a period of travel. His family had an estate there, and Homer lived in the carriage house, about 75 feet from the ocean. The subjects of his art would change over the last 30 years of his life: fewer society women and more working women and men. And then, by the end, he focused almost exclusively on the rugged landscapes he’s famous for, absent of people entirely.

But Homer wasn’t much of a hermit, actually, not the way he’s often remembered. His later life was not absent of people. His family was there in Maine, after all, and friends of the family. There may even have been another romance or flirtations anyway, early on, judging from the pictures.

But let’s go back to 1868 one more time, and the New Year’s illustration of the woman with the long face, waiting for a gentleman caller. As Homer seemed to understand, it’s better perhaps not to sit by the window, waiting for your ship to come in, only to be disappointed. Better to build your own ship, and sail it wherever you want to go—wherever makes you happy. To Maine or the moon or simply to a better year than the one before.