How to Stop an Assassin: The Poison-proof Silverware That Could Save Your Life (Maybe)

This is a transcript of The Object podcast, episode eight, first broadcast in April 2019. You can listen, subscribe, and find all-new episodes here, or wherever you listen to podcasts.

Assassins are everywhere in art museums. Depictions of assassins, I mean, not like some ninja actually hiding in a suit of armor. I mean, images of men and women, with swords or knives or guns, out for blood. There are more than you might think.

In the Minneapolis Institute of Art alone, there are 12 paintings, statues, and drawings of a rather obscure Bible story about an assassin named Judith beheading an enemy general. Which is pretty much exactly what it sounds like. A woman, a sword, a bloody head. Mission accomplished.

There’s also a painting from 1627 about the alleged assassination of Germanicus, a Roman general. A man who lived hard, attacking German tribes. And then died hard, supposedly poisoned on orders from his own adoptive father, the Roman emperor Tiberius. Poisoned to death for getting a little too big in the britches. Thanks, dad. 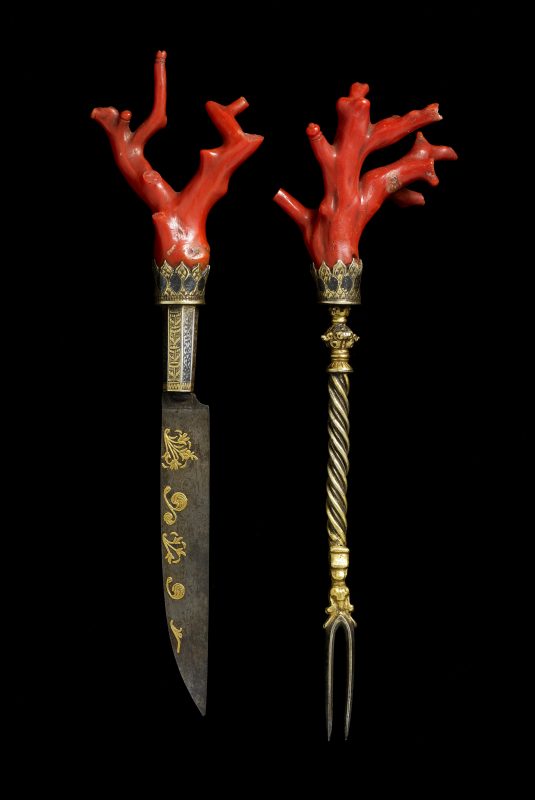 An ultra-rare cutlery set, made in Italy in the late 1500s, in the collection of the Minneapolis Institute of Art.

And then, on the third floor of the museum, in a glass case, is a fork and a knife. Extremely rare. Made in Italy in the late 1500s. Two exquisitely designed utensils, with all this inlay and metalwork, capped with little gold crowns.

Which is the story I’m going to tell today. About this fork and knife, which doesn’t sound like it has anything to do with assassins.

Except the handles. The handles are made of bright red coral. Like the stuff in the ocean that you snorkel around.

And it’s not a coincidence that it’s red. Red as blood.

People have been killing each other, for power or control, well, forever. Peaceful transfers of power are not the historical norm. There’s a list on Wikipedia called “Popes who died violently”—like, almost all of the early ones. Pope Clement the First, thrown into the sea with an anchor around his neck. John the 8th, poisoned and clubbed to death. John the 10th, smothered with a pillow.

There’s a whole other Wikipedia category of “murdered monarchs” broken down by century and region—Moroccan monarchs, Persian monarchs. If you were a Scottish king in the Middle Ages you were pretty much just waiting to be killed by your successor, just wondering how it was going to happen—knife, arson, red-hot poker shoved up your … you get the idea.

So, if you’re a powerful person in Europe 500 years ago and everyone but your dog is a potential assassin, what do you do? How do you protect yourself?

Say you get a castle, you dig a moat, you hire an army. And then, you never leave the house. You raise the drawbridge and stay put.

But what if you’re invited…to a dinner party?

There is really only one thing you can do. You bring your own special knife and fork. Like the ones at the Minneapolis Institute of Art, with the handles made of bright red coral.

This isn’t as unusual as it sounds. In the 1500s, Europeans didn’t own sets of cutlery—enough forks and spoons and knives for the whole table. They only owned their own spoon and knife, and if you were rich enough to travel you traveled with your knife. In a little ornately decorated leather case that you slung over your shoulder or carried on your belt. This was true until like the late 1600s, early 1700s.

And forks—most Europeans didn’t have forks. Forks originated in the East, around Constantinople—now Istanbul—before migrating to Italy. Which made them suspect in the West. There was this whole school of thought that forks were unmanly. Seriously. That the only people who would use forks were effete royals and hermaphrodites. Manly men only needed a knife and fingers. As late as 1897, British sailors were still eating without forks, because manhood.

George Washington, by the way, who was still carrying around his own knife and fork—with pistol handles on them—was accused of betraying democracy because he owned a fork.

Anyway, it’s incredibly rare that someone even had this fork and knife in the 1500s, but not surprising really that it came from Italy.

If you’re into cutlery, you know the story of the noblewoman Catherine de Medici, who comes north from Italy in 1533 to marry Henry II, the king of France, and she brings her fork and freaks everyone out. She brings her table manners, too, which freaks out the French even more. 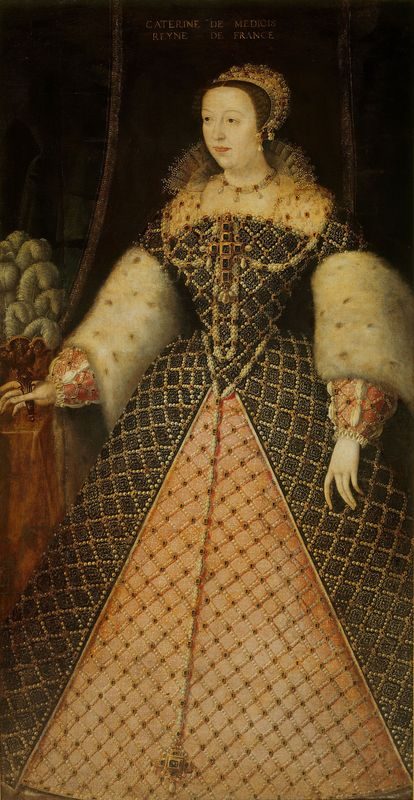 A portrait of Catherine de Medici, by an unknown artist circa 1555, in the Uffizi Gallery.

Because the only table manners in Western Europe in the 1500s were sit down, dig in. And don’t kill anyone, if you can help it. Also, they didn’t have tables, the way we think of them now. They had a board, which they set across a couple of sawhorses, basically, when it was time to eat. That’s where we get the terms room and board, and board meeting, and board games, and above board—which meant, keep your playing cards above the table, where everyone could see them. No cheating. Or, you know, we’ll kill you.

But Catherine, once she was in France, went around the country for more than a year holding big spectacular food festivals. Trying to unite all these different rival factions over food. So you were obligated, basically, to dine with your enemy.

Your enemy who might very well be slipping you some poison in your food, if he isn’t stabbing you outright.

And that’s where the coral comes in.

So this is where coral comes from, if you choose to believe. Perseus, the Greek hero, chops off the head of Medusa, the snake-haired Gorgon, who could turn you to stone with a single look. So there he is, carrying this creepy head home when he sees a princess being attacked by a sea monster. So he holds up the bloody head, and the sea monster turns to stone.

He’s really making use of this head. But he’s also kind of bloody now, so he sets the head down to wash his hands, and blood from the head leaks onto some seaweed and turns it hard and red. And that’s coral. That’s where coral came from.

And coral has magical powers of course because of this dead monster blood that formed it.

You can believe it or not. But that’s all anyone needed to hear in the ancient world. In the Roman world, red coral was used for teething rings and rattles to protect babies from evil.

Kids would go around with pieces of coral draped around their necks like, well, a necklace. 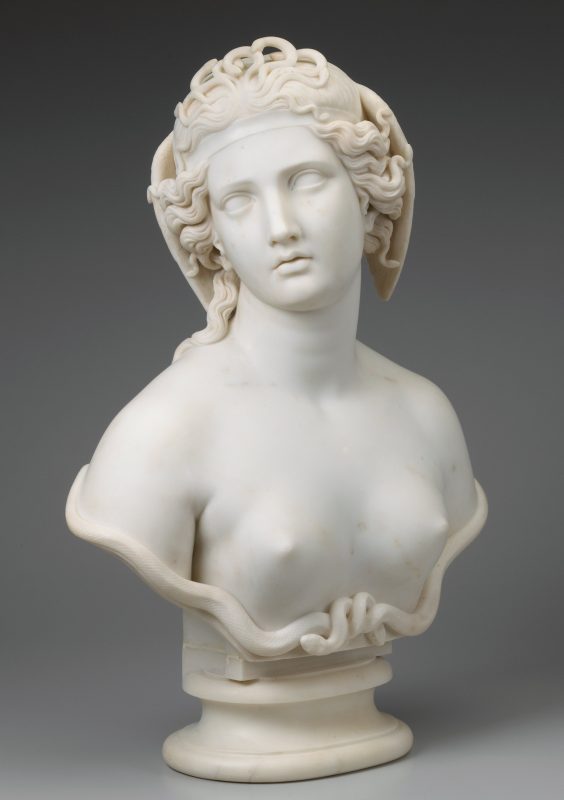 A bust of Medusa, by Harriet Goodhue Hosmer circa 1854, in the collection of the Minneapolis Institute of Art.

And this belief persisted, century after century. Until here we are, in the Renaissance, and people who put no faith in the ancient Greek myths are still wearing coral for protection. From evil, from poison — from assassins. In fact, the myth about red coral and Medusa’s blood just kind of morphed, like so many things in the Christian Era, to red coral symbolizing the blood of Christ, which of course was also protective.

It was the perfect thing to put on your knife and fork.

Now, were Europeans really afraid of being poisoned? Yes. Yes, they were. They were wary of all kinds of things—the evil eye, magic spells, toads. But there really was some poisoning going on.

People used to wear poison rings, in fact, if they were a certain kind of person. Rings that had a little box that would swing open and deposit some poison in your drink and you’d never know—how did it get there?

It’s one reason rock crystal goblets were so popular—rock crystal was thought to be protective, too.

But people kept getting killed.

Eventually, of course, poisoning became harder to get away with, and people stopped carrying their own silverware around. And coral’s prophylactic power faded away.

Ironically, now that people don’t use coral to protect themselves, it’s the coral that needs protection—from us. Coral is an animal, actually, not a kind of seaweed. And it’s dying almost everywhere in the world because of climate change.

We used it to keep us safe from poison for thousands of years, and now, in a generation, we are likely to poison it out of existence.

And when it’s gone in the oceans, this is where we’re likely to see it. In a museum, under glass, on the handles of old utensils. A tribute of sorts to our uncanny ability to survive, and a memorial to those who did not.