When Rose Boyd died, in 1917, Louise Weyerhauser noted the date in her diary. Weyerhauser was the daughter-in-law of a Minnesota timber baron. Boyd had been one of the high-end dressmakers she hired to design her clothes, for traveling or for balls or for just being seen around town—a fresh wardrobe every year. Boyd had helped Weyerhauser and her entire class of women glide through life in style. And now she was gone, along with the era she embodied.

In a new exhibition at Mia, “The Art of High Style: Minnesota Couture 1880–1914,” this largely forgotten zenith of custom clothing—made by women, for women—is explored through period dress, artworks, and photographs of the designers and their shops. It shows the confluence of events that sparked this sartorial golden age as Minnesota emerged from the frontier in the late 1800s. When the newly wealthy aspired to fine dress, railroads were opening up the country, and immigrants were pouring into the state in search of work—and finding it in shops like Madame Boyd’s. 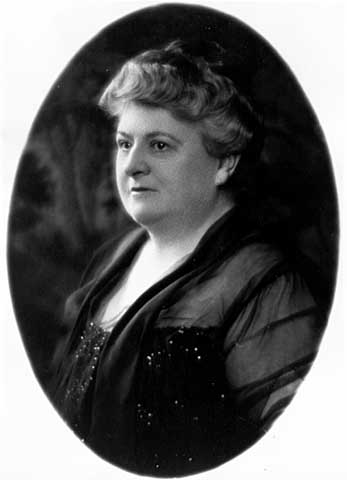 Roseanne Boyd, proprietor of Madame Boyd’s, one of the top dressmakers in Minnesota.

Boyd had been a dressmaker in Michigan and New York before arriving in Minneapolis in 1886. She called her shop Madame Boyd’s for continental flair, and expanded her business several times before landing in the former mansion of milling executive Fred Pillsbury, as close to her clients as she could hope to be.

The exhibition features a dress Boyd made for the first woman pharmacist in the Twin Cities. Like Boyd, the pharmacist was allowed to visit women in their homes—in her case, bearing drugs. They had a close, discreet relationship with their upper-class clients, and money of their own. But they were only around this milieu, not of it. They were professionals.

For a long time, these relationships and the scale of the couture culture in Minnesota was a lost history. But starting in the 1970s, researchers at the Minnesota Historical Society began investigating the custom-made clothing in the collection—now more than 25,000 pieces. Linda McShannock, the co-curator of this exhibition, picked up the trail in the 1980s.

“We knew a little about who wore [these clothes],” says McShannock, who worked at the Minnesota Historial Society for decades as a curator and textiles specialist. “But in the garment would be all these names: Boyd, Malloy, Christianson. So there was a move afoot to discover who these designers were.”

She began looking through old city directories, which often listed people’s employers, and noted anyone who appeared to work in the garment industry around the turn of the century. For about 15 years, she deployed volunteers to track these people’s employment history, and now the picture is much clearer: Dressmaking was a major business—the second largest employer of women, below domestic service. In 1890, more than 5,000 women worked as seamstresses, dressmakers, or milliners. The business offered immigrant women, especially, an economic ladder. Beginning as apprentices, they could advance and become more specialized, and potentially be mentored into their own shops.

But it was also a highly transient business. Every summer, it shut down. The seamstresses were let go and hired back in the fall—possibly at a different shop—when the social season began anew, requiring a fresh wardrobe. But they didn’t just lose their jobs, they often moved from one boarding house to another, especially if they picked up in another shop. Before modern labor laws, with little independence, the women were at the mercies of a notoriously fickle business and the social prerogatives of a class they were unlikely to inhabit, no matter how hard they worked.

The idea for the show surfaced one day when McShannock was discussing her research with Nicole LaBouff, Mia’s Associate Curator of Textiles, and they realized they both loved a painting at Mia called Rainy Evening on Hennepin Avenue. It was painted around 1902, and LaBouff and McShannock are drawn to the fashionable women walking over wet cobblestones—specifically their dresses. 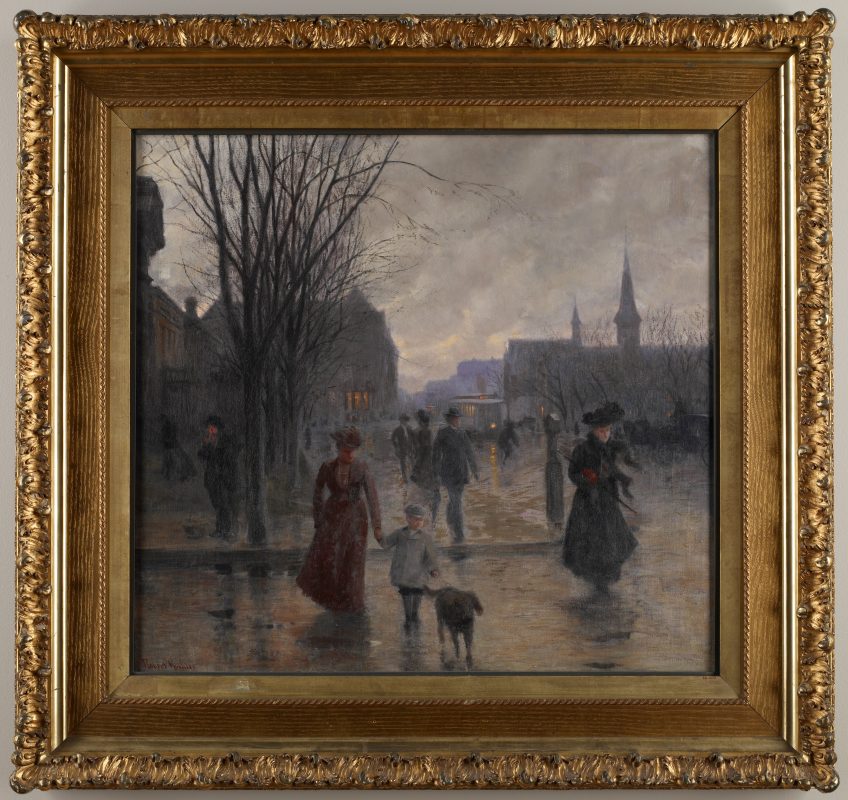 A shared affection for this painting in Mia’s collection, “Rainy Evening on Hennepin Avenue,” sparked the idea behind the exhibition.

LaBouff suggested they pair artworks like the Hennepin Avenue piece with actual garments from the Historical Society’s collection. “You can see how these different works of art bring each other to life,” says LaBouff, the co-curator of the exhibition.

Some of the artworks show Minnesota in that liminal phase between frontier and industry: the old growth forests along the North Shore, just before they were logged; the Stone Arch Bridge in Minneapolis, when it ferried railroads across the Mississippi. James J. Hill, an early patron of Mia, commissioned the bridge for his railway, and one of his tuxedos—designed by the Schaub Brothers tailoring shop, in St. Paul—is displayed in the exhibition.

A painting from 1884 shows a fashionable woman in Paris, her sumptuous attire highly reminiscent of the work of Twin Cities designers—and for good reason. The best local designers made annual trips to the Paris fashion houses for the latest patterns and fabrics, and vice versa: sales reps from fabric houses in Paris and London trekked to Minnesota every year, to sell their wares to Twin Cities designers. “This fashion was not provincial,” LaBouff says. “It kept pace with what was emerging in Europe.”

Boyd was among the designers making the pilgrimage to Europe. Yet, like all women in the United States before 1914, she had to travel on her husband’s passport. At her peak, she employed a hundred designers, fitters, and seamstresses. Yet she couldn’t vote.

She died before the 19th Amendment was ratified in 1920, granting women in the United States the right to vote. By then, local couture had faded. Louise Weyerhauser was still racking up more than half a dozen visits to multiple dressmakers in a single month in 1914, according to her diary, but she was becoming an anomaly. Most of the high-end designers in the Twin Cities were retired or dead.

Women’s clothing had become simpler, looser, less body-conforming—think of flappers in the Jazz Age. And there were more places to find it, in women’s shops and department stores and catalogs. You could even make it at home, if you were reasonably skilled with a sewing machine. The women who had labored as seamstresses and designers had more opportunities, too, in ready-to-wear factories or behind store counters—selling clothes instead of making them.

“With many women, dress in all its details and necessities of shopping, fitting, etc., is a business requiring an average of three or four hours daily,” noted the Minneapolis Saturday Evening Spectator in 1882. Thirty years later, it was hardly anyone’s business at all.