Picturing tragedy: Artists have historically helped us confront crises—can they do it now?

In the early 1900s, the sociologist Lewis Hine taught himself photography and began documenting the thousands of immigrants arriving every day in New York Harbor. Eventually, he turned his camera on the conditions of child workers, sometimes posing as a fire inspector or Bible salesman to get into factories. (This work is now featured in Mia’s Just Kids exhibition.) Over the next hundred years, other photographers would follow his lead in capturing the social impact of major turning points in history, from Dorothea Lange during the Great Depression to Margaret Bourke-White during World War II to Danny Lyon during the Civil Rights Movement. Their stunning vignettes, often shot in black and white, made clear the plight of their fellow humans and stirred change in public opinion.

Throughout history, hearts and minds have shifted through the power of images. Images have the power to confront viewers with the experiences of others, often unseen or unacknowledged. But what if there are no photographs, no images, that help us see the pain, injustice, or grief?

Despite the extraordinary loss of life, not to mention the daily impact on health and well-being, the Covid-19 pandemic has generated relatively few images of mourning families or loved ones laid to rest. Instead, the images we have seen feel poignant for what they do not include, for what is missing. Empty streets replace typically bustling city corners. Office spaces, restaurants, and theaters sit empty. Black-and-white photographs have been replaced by black-and-white grids, charts, and lengthy articles—stand-ins for lives lost and lives altered. 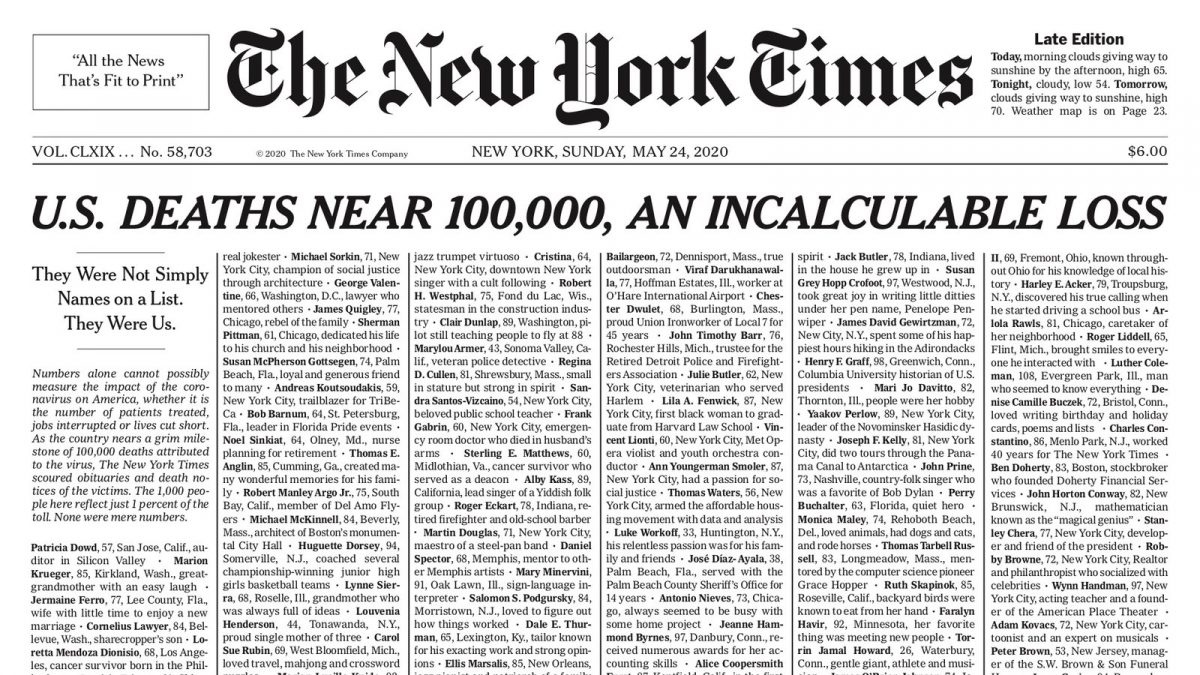 In late May, for example, the New York Times filled its front page not with images but names, six columns of black-and-white text, quietly naming a fraction of those taken too soon by Covid-19. With great visual economy, the Timespresented readers with what it called “an incalculable loss,” the reality of a deadly disease that has largely ravaged the world behind closed doors.

This typographic treatment underscores what has felt so unsettling throughout the pandemic, the seemingly faceless nature of the disease and the deaths associated with it. To be sure, there has been some photographic documentation, generally of frontline workers, often masked and anonymous. But these can feel like barriers to what is beyond, shielding our view from the chaos on the other side of the hospital doors.

The AIDS crisis of the 1980s might also have remained anonymized, were it not for radical artists and activists producing in-your-face representations of the epidemic that claimed more than 18,000 lives in the United States alone. To grapple with the complexity of the pain, many artists producing artwork on the topic paired powerful imagery with text.

David Wojnarowicz was one of them, an artist of many mediums including paint, photography, film, and pen. His work stood at some intersection of all of them, leading to deeply personal representations of the world around him—a world he felt was content to let gay men die. 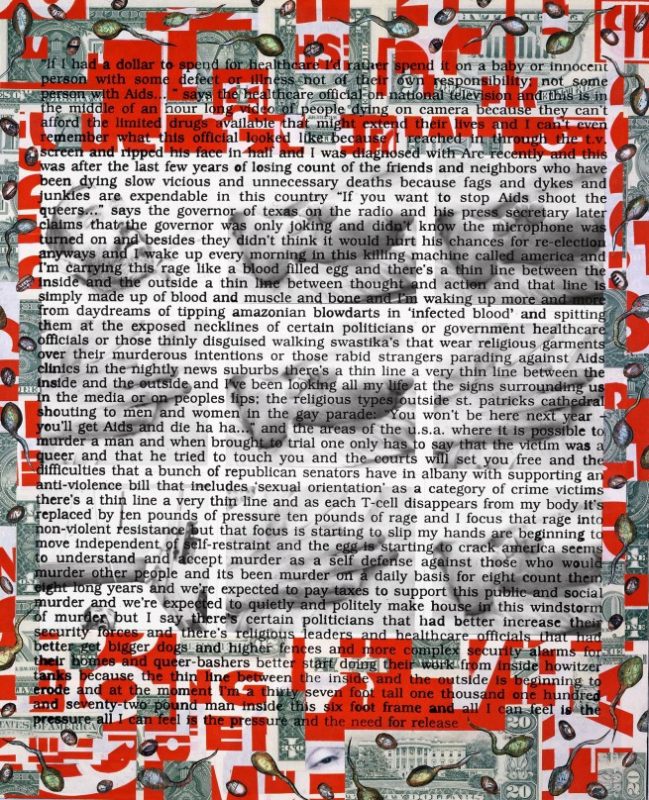 Untitled (Hujar Dead), a collage that Wojnarowicz began making in 1988 in memory of photographer Peter Hujar, is just 39 by 32 inches, but barrels over its viewer slowly. The piece, now in the collection of the Whitney, includes straight-edged pieces of paper cut from supermarket posters overlaid with strips of United States currency. This acts as a sort of frame for several pictures of Hujar shortly after he died, his face gaunt, his feet and hands warped. Text is laid upon this graphic and tragic scene, adding another layer of tragedy to the assemblage. Part of it reads:

“… there’s a thin line a very thin line and as each T-cell disappears from my body it’s replaaced by ten thousand pounds of rage..it’s been murder on a daily basis for eight count them eight long years and we’re expected to quietly and politely make house in this wind storm of murder. …”

This use of text and image reads like a visual representation of an internal monologue, one that has now become visible and excruciatingly personal. Worjavoviz contracted HIV in 1987 and died five years later at the age of 38. 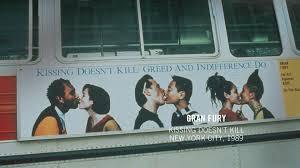 Other artists used the medium of advertising and activism in order to bring attention to the devastation. The artists in the 1980s collective known as Gran Fury served as the unofficial ad agency for the AIDS Coalition to Unleash Power (ACT UP). In one ad, which was plastered on the sides of buses in New York City, the headline “Kissing Doesn’t Kill: Greed and Indifference Do” is written in all caps above three couples kissing. In another work, the slogan “Silence = Death” was written in red and white neon lights.

These artists and others used shocking images in order to jolt their viewers into action and wielded text to make them think deeply.

The “Silence = Death” message is now on masks, bridging the AIDS and Covid-19 crises.

Time and again, artists have demonstrated their unique ability to visually express a moment and ask poignant questions about our collective experiences. Right here in Minnesota, artists are beginning to do the same. Leslie Barlow (who will exhibit at Mia in March 2021) and Ryan Stopera created a quarantine zine called Connection Unstable, which aims to archive the present moment. Billboards have been raised with messages of hope and connection during a time that feels neither hopeful nor connected. Other artists have created public art related to our different but simultaneous epidemic of systemic racism and white supremacy.

Our collective grief is being expressed in visual means, but perhaps in ways we haven’t seen before. Our connection to imagery has changed in its saturated state online, so what might elicit change today?