Secrets of the veiled lady: The passion and politics behind Mia’s marble masterpiece

On October 12, 1846, William Spencer Cavendish dropped by the studio of Raffaelle Monti, in Milan, Italy, to inquire about a lady. Cavendish was the 6th Duke of Devonshire, widely known in England as the “bachelor duke.” He had eight of the finest homes in Britain. He had 200,000 acres of British soil. He had a banana named after himself—the Cavendish, cultivated in his gardens and soon to become the world’s most popular variety. And now, at 56, he wanted a certain young woman, demurely and paradoxically hiding behind a veil of stone.

Veiled figures, usually carved from marble and suggesting a face or body partly obscured behind fabric, had first become popular a hundred years earlier, in the 1700s. The effect is an illusion, of course, enabled by translucent marble and a sly composition. It is no more real than a lady being sawed in half onstage, a kind of parlor trick for late Baroque sculptors to show off their chops. But as illusions go, it’s mesmerizing, and sculptors competed to put all manner of subjects under “see-through” garments, from the Virgin Mary to Mary Magdalene. Cavendish was friends with Antonio Canova, a fellow bachelor and popular Italian sculptor, who adored a veiled Christ carved by Giuseppe Sanmartino in 1753 and declared that he would have given up 10 years of his life to create such a masterpiece.

Monti was certain he could do it. Though he was only in his late 20s when Cavendish came by, he had proven himself a preternaturally gifted sculptor. Like the duke, he had inherited his vocation. His father, Gaetano, had a prominent sculpture business, and Monti learned at his side as well as at the Fine Arts Academy in Milan, where he earned a Gold Medal at 20. He then spent four years in Vienna, sculpting busts of the Austrian royal family, before returning to Milan just as the Austrian empire was solidifying its grip on much of Italy. 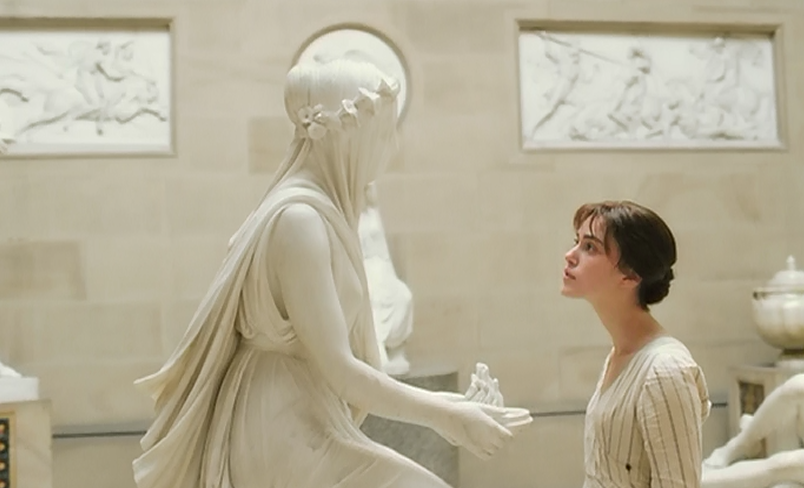 The duke was convinced. A few days after meeting with Monti, he left the young sculptor with a substantial deposit, worth about £6,000 today, for one veiled vestal virgin. When the sculpture arrived in England, in the spring of 1847, the Duke apparently displayed it in his villa west of London, known as Chiswick House. But in 1999, it moved to Chatsworth House, the likely inspiration for Mr. Darcy’s estate in Jane Austen’s Pride and Prejudice and the stand-in for the home in the 2005 film version of the story. In one of the film’s most tender moments, Keira Knightley encounters Monti’s masterwork in the home’s sculpture gallery, and in the veiled woman’s visage she seems to find the compassion she had not yet discovered in Mr. Darcy himself.

For the duke, the veiled virgin was one sculpture in a vast collection of white marble that he had been building for 30 years. But for Monti, it was a game-changer.

In 1848, a year after sending the duke his prize, Monti joined the revolt against Austria. When the Italians lost an early battle, Monti left for London, never to return. And there the veiled virgin became his signature motif, a parlor trick for the elite to display in their homes as conversation pieces. Indeed, he helped inspire a whole cottage industry of veiled women, mostly carved by Italians, who made of these anonymous, virtuous women a subtle symbol of patriotism. 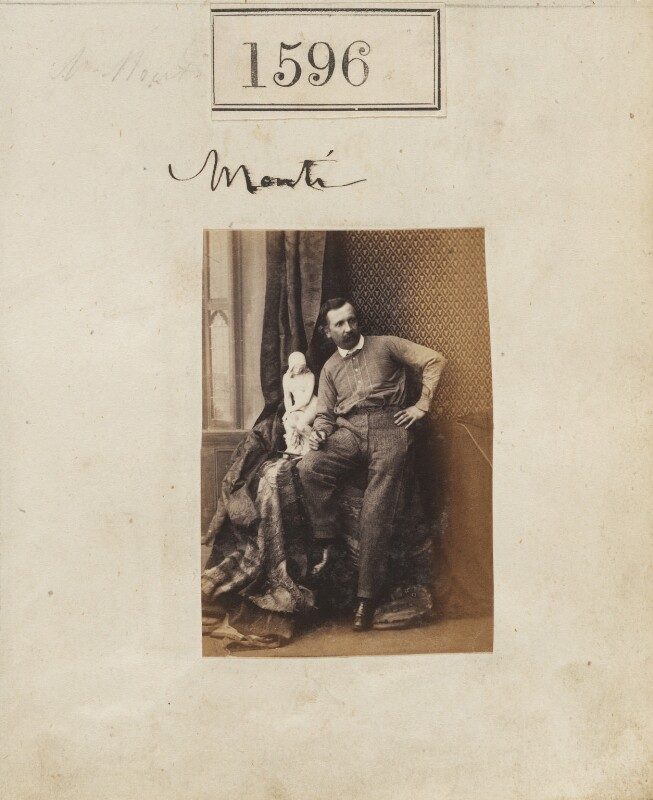 In 1851, when the Great Exhibition opened in London, the Crystal Palace was crammed with some 100,000 supposed examples of the white man’s progress, from machinery to art. Several sculptures by Raffaelle Monti were among them, representing Italy. One of the sculptures is an overt allegory, a colossal man holding attributes of Italian heritage, from music to silk-making to the visual arts. Three other sculptures were of young women, all of them in veils—including the duke’s veiled virgin.

By then, Monti was established in London as something of a commercial artist. His art was popular; his workshop was busy. Sculpture itself, so easily copied through casting, was becoming seen as commercial art. Yet Monti strove to portray his sculptures as fine art. When he discovered that one of his works, sitting in a London gallery, had been photographed without his permission, his representative voiced Monti’s concern that it would be “pirated in clay or porcelain by some of those persons who are to be distinguished from artists as ‘art-manufacturers.’” He was right to be worried, at least from a practical standpoint: when his sculpture of a veiled nymph was removed from the Great Exhibition to be photographed, it came back with three fingers missing.

Monti was at least as concerned about Italy itself. Shortly after the Great Exhibition opened, Monti served as a spokesman for the Italian sculptors at a reception, toasting their English hosts with a vow to repay their hospitality “on the banks of the Po and the Tiber.” About 10 weeks into the show, however, a correspondent for the The Times of London reported that Austria had succeeded in solidifying its grip: “every pass, every fort, every city gate, is in her indefinite possession.” As the reporter noted, “the total destruction” of Italy’s push for independence was at hand. 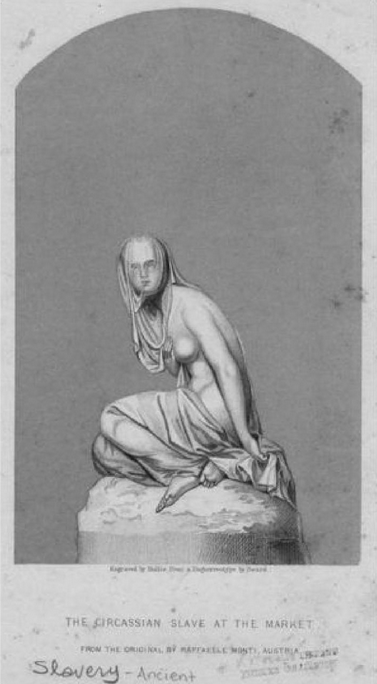 An engraving, made from a daguerreotype, of Monti’s “Circassian Slave at a Market in Constantinople,” as displayed at the Great Exhibition of 1851. The original sculpture is now lost.

When the show was over, Monti was a celebrity. Some six million people had filed through the Crystal Palace, about 42,000 a day. One of his sculptures, in particular, had been a major draw: A Circassian Slave in the Market Place at Constantinople. It depicted a nude woman sitting on the ground, with a long bare back and a veil over her face. The veil, critics believed, was the real crowdpleaser—and they weren’t happy about it. It was a “trick,” a “trivial accessory,” they wrote, “captivating and surprising as a novelty” but “beneath the dignity of sculpture” as a recurring motif.

Nevertheless, Monti persisted. Around 1860, when he carved the Veiled Lady now in the collection of the Minneapolis Institute of Art, such figures were clearly associated with the Risorgimento, the Italian unification movement. The veil, masking any distinctive features, suggested every Italian woman. She was the Britannia, the Lady Liberty, of Italy.

By 1870, however, when Italy finally united and the Austrians were gone, Monti was in poor shape. He was in his 60s and deeply in debt. He reportedly never went out after dark, fearing he would encounter someone he owed. In his later years, he had mostly worked as a designer for silversmiths and porcelain makers like Wedgwood. He had sold his carving tools.

He had never married, yet he had a community of men—mostly fellow bachelors—who were artists or connoisseurs and found expression in the making or collecting of sculpture. In the last year of his life, Monti lived as a boarder in the home of a German watchmaker, in the West End of London. He died there in October 1881, just a few miles from his veiled virgin in Chiswick House, with a fellow sculptor at his side.