The work of Kenneth Tam takes shape as video, sculpture, and photography that challenges our received ideas and societal norms regarding the male body as it relates to physical intimacy, sexuality, vulnerability, and private ritual. His practice involves the participation of strangers—often recruited through online message boards and forums such as Craigslist and Reddit—in situations orchestrated by the artist that range from tender to awkward to absurd. In 2017-2018, Mia hosted the solo exhibition Kenneth Tam: Cold Open, which focused on video works in which Tam created spaces for men to play, express their feelings, and bond with one another in ways that question accepted behavior in heteronormative male culture.

Since the outbreak of Covid-19, we have all been forced to socially distance ourselves from family and friends, testing our basic human needs for social interaction and intimacy. In addition, there has sadly been a marked increase in anti-Asian racism and violence here in the United States, tied to the virus’s supposed origins in China. I caught up with Tam, who lives in Brooklyn, just as protests were beginning nationwide, to see how he’s been adapting to life during the pandemic and to learn about his involvement with the group StopDiscriminAsian (SDA), which helps document and combat this rise in anti-Asian rhetoric and hostility. 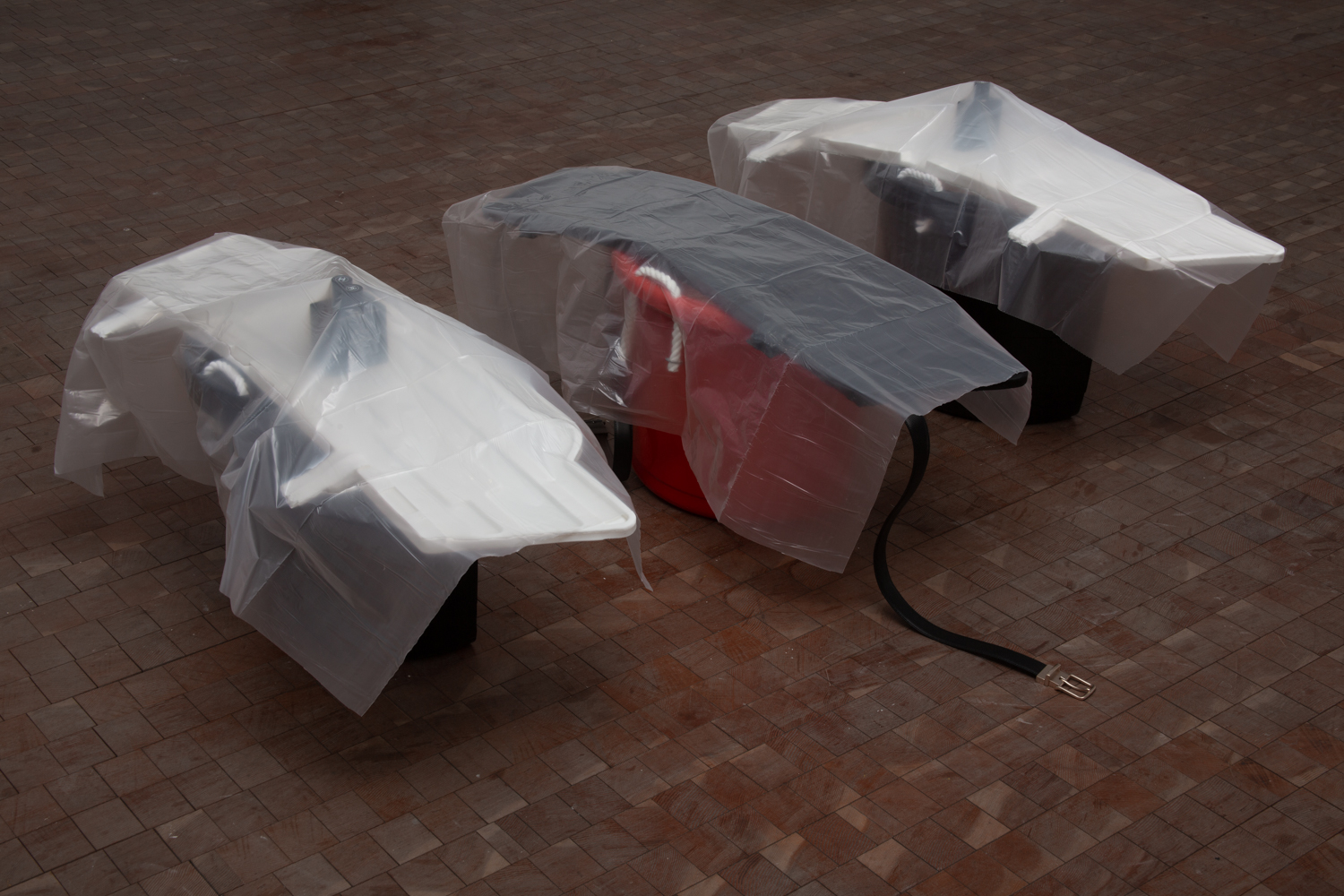 How are you and your family doing? How are you coping with the pandemic?

I’m doing well, all things considered. We have a 6-month old keeping us focused and in good spirits. I think we are coping like most other people we know who are still in the city, settling into strange new routines of mostly staying inside but venturing out for groceries and other staples. My parents live in the city, as well, but we’ve kept our distance until it seems safer. We look out the window a lot, often warily. My partner and I are fortunate enough to have jobs where we can work remotely, so that has meant plenty of Zoom meetings, and trying to schedule them so that our Zooming doesn’t overlap and conflict with the baby’s schedule.

Art-wise, do you have projects or exhibitions in the works, or has that taken a back seat for now?

Art production has mostly ground to a halt. I was in the middle of production for an exhibition of new work that was slated to open in the fall at the Queens Museum when we all went into lockdown. The show itself has been pushed back until the spring of next year, while a residency at The Kitchen in November is still moving forward. Both projects involve working with others in close proximity, and it remains to be seen how we can do that safely. At The Kitchen I was planning on choreographing a live performance, and while I’m holding out hope that can still happen in some limited way, the more likely outcome is some kind of recorded event made available online. Until I can figure that out, I’m mostly doing research and tending to other administrative tasks from home. 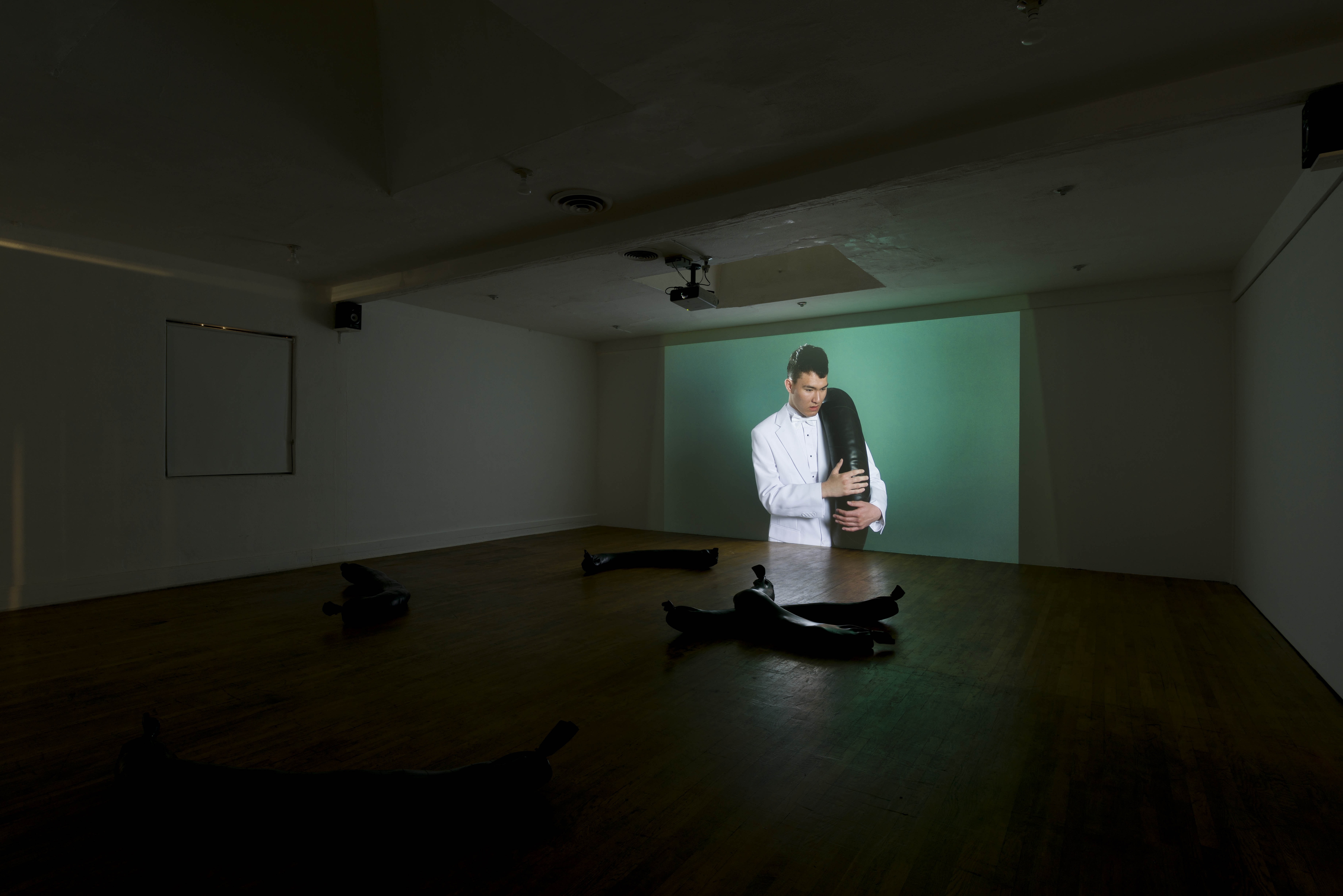 Regarding the current pandemic and the need to social distance, I found myself thinking about your work “Sump,” which was exhibited at Mia in 2017-2018. This work features you and your father in a number of intimate exchanges that are at times humorous, touching, and awkward/absurd. You’re interacting through touch and close proximity, which challenges traditional notions of masculinity while also creating space for new forms of male bonding.

For me, this work feels more timely than ever, due to the distance we are required to keep from those we love, and maybe more importantly the image of two Asian men sharing tender moments feels so needed right now. There is now a rising tide of anti-Asian racism/hostility/violence worldwide due to the spread of Covid-19.Could you speak about the work you are doing to counter it?

In late March, I began circulating a spreadsheet that asked people to record either direct experiences of racist harassment/assaults, or incidents they heard about through others. This was in response to learning that a friend experienced something in the same neighborhood I live in, and instantly I felt the need to both record and share these stories with others. Within the Asian community, I know it’s difficult for some to even acknowledge these incidents as racially motivated; they are often just passing anecdotes between close friends or family. Oftentimes they are small incidents that people will minimize out of shame or embarrassment, and I wanted to create space to make it O.K. to talk about them, and hopefully create awareness and vigilance around these increasingly violent attacks. I also knew that by aggregating these stories, people could better understand the scope of the problem and make its prevalence irrefutable. At this point there are over fifty entries, which in reality is just skimming the surface of what is happening daily across this country, but I believe the document creates an indelible impression on any reader and I hope they respond with both concern and action. 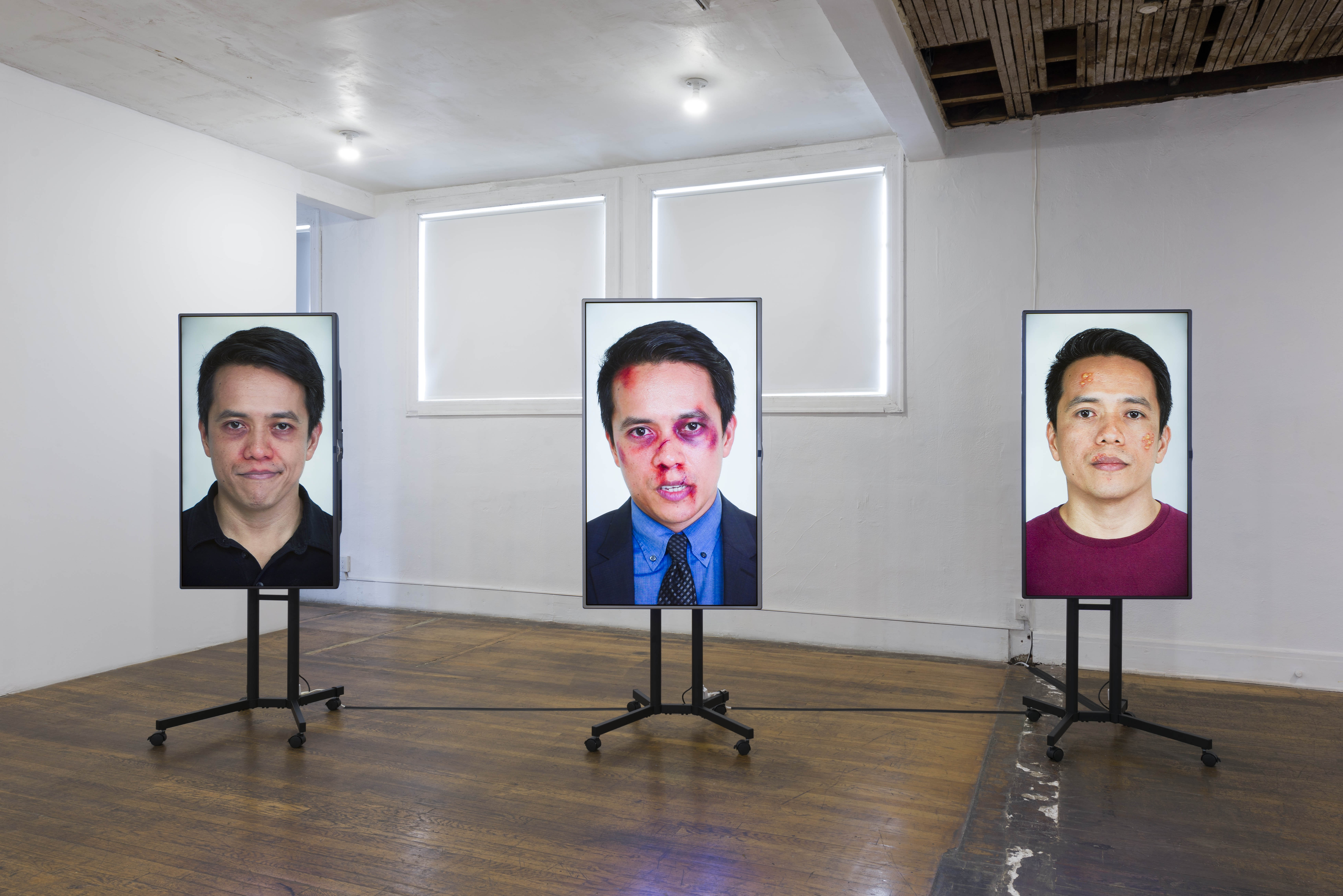 Have you personally experienced any hostility, as an Asian American man, due to the Covid-19 outbreak?

I experienced one incident while shopping at Whole Foods, which kind of not surprisingly has been the location where a number of incidents on the spreadsheet have taken place. This was in the very early stages of the pandemic in late February, early March. A very nervous-looking white woman became upset at the way I was handling the broccoli I was inspecting, and she told me to stop touching it. I turned around and the first thing I noticed was that she was shopping with mittens on. I walked away feeling very startled, and unsure if I had done anything wrong to merit that comment. I spent some time afterwards wondering how racially motivated that was—would she have said the same thing if I wasn’t Asian? Was I over-reacting? I think the very fact that I had to internally run that experience over and over again in my mind to answer those questions makes me catalog this as an experience of racism.

I know you are involved in the group StopDiscriminAsian (SDA). Could you explain what that group is and what its plans are going forward?

StopDiscriminAsian (SDA) is a coalition of workers within arts and culture who are confronting the racism, xenophobia and violence towards diasporic Asians, which have been amplified by the Covid-19 pandemic. SDA seeks to expand awareness through the galvanization of individual voices in solidarity with other marginalized communities to expose and subvert the systemic racism and economic injustice exacerbated by this unprecedented moment of global emergency. I think it’s important to emphasize that while Asians/Asian Americans are targets of increased xenophobic hate right now, all communities of color are experiencing trauma disproportionately due to the pandemic. It is abundantly clear that we are not only in an epidemiological crisis but a massive social one caused by decades of inequity, racism, and neglect. One of SDA’s goals is to build awareness as to how all these issues are connected.

Having seen a snippet of your latest project, “Silent Spikes,” which deals directly with notions of masculinity within the Asian community, I’d be interested to hear what your hopes are for this piece, given the current situation.

“Silent Spikes” is my first specific attempt to address ideas around gender performance as it overlaps with race. My goal in creating this work was to spotlight the particular way in which certain masculinities are devalued, and to find ways to subvert dominant expectations and narratives through the assertion of “Asianness.” I use that word in quotes because I’m not exactly sure what that means, and I certainly don’t want to create a singular definition for it, but I’m using the project as an opportunity to perhaps reveal that in visual terms. What’s important for me was that my response to the oppressiveness of hegemonic forms of masculinity not be another version that is just as problematic. I’m trying to find a mode of expression for my participants that is more open-ended, that values sensuousness, and that can embrace all the qualities within identifying as Asian and male without stigma.

Going forward in our new normal, how can we better empathize with one another? And how can we support the Asian and Asian-American community?

I think this is a very important question and challenge moving forward. I think about this when teaching over Zoom, when I could sense how some of my students were still distraught from moving back home and I had to step up my own efforts to support them emotionally. Or when I now have interactions with people out in the world, and our masks make it impossible to read each others’ faces or to communicate emotions in the same way, so I find myself having to overcompensate in order to convey how I’m feeling. It’s going to take work to stay connected with each other, and for many this will mean stepping out of our comfort zones to find ways to bridge the gaps created by social distancing.

In terms of support, one practical thing everyone should do is understand their role as active bystanders and how to safely intervene if they witness an incident of harassment or abuse. Hollaback has an excellent resource for bystander intervention that I encourage everyone to read. Another thing is to directly support your local Asian-owned businesses. Many of these places had seen steep declines in customers even before the lockdowns, and will need help in order to survive. More broadly, I think it’s important that we all take steps to commit ourselves to anti-racism and dismantling white supremacy and thinking deeply about our own attitudes and beliefs towards others, in order to confront racism wherever we see it.

Gabriel Ritter is the curator and head of the Department of Contemporary Art at Mia.