The case of the missing Rembrandt: How “Lucretia” returned to life, more than 250 years after vanishing

(This is a transcript of The Object podcast, episode 12, first broadcast in August 2019. You can listen, subscribe, and find all-new episodes here, or wherever you listen to podcasts.)

In 1926, an art dealer in New York announces it has a painting by one of the most famous artists in the world: Rembrandt Harmenszoon van Rijn. You may know him as just…Rembrandt.

The painting is of a young woman, who’s having the worst day of her life. In fact it’s the last day of her life. She’s holding a dagger. Her dress is stained with blood. She’s committing suicide, and she looks literally heartbroken. It’s one of the saddest images you can think of. 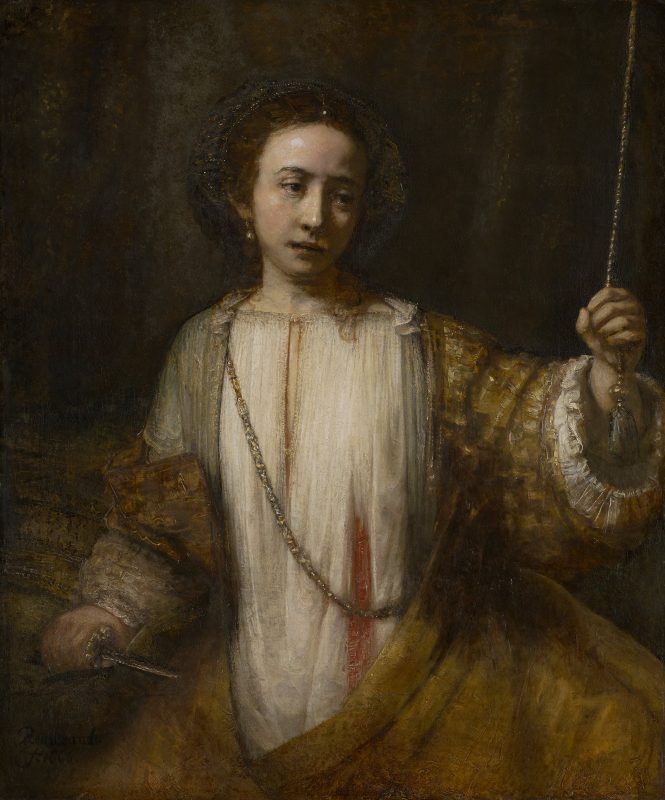 “Lucretia,” painted by Rembrandt in 1666, in the collection of the Minneapolis Institute of Art.

Her name is Lucretia, and when the art dealer starts shopping her around, the world swoons. A prominent expert on Rembrandt writes, “I cannot remember having in a long while been so deeply touched with a work of art.”

The New York Times raves, “There are few indeed with souls so dead as not to thrill at the sight of this picture.”

Never mind it’s a picture of a girl killing herself…it’s a masterpiece, up for grabs.

In fact, it’s even more than that.

Rembrandt made more than 300 paintings. And people were pretty good about keeping track of them. Because, you know, they’re worth a fortune. So, in 1903, a little over 20 years before the Lucretia painting surfaces in New York, a catalog—or inventory—of his paintings was put together.

But the Lucretia painting wasn’t in the catalog.

It was lost, or at least forgotten.

In fact, for 260 years hardly anyone had seen this painting. Nearly as soon as Rembrandt painted Lucretia, she vanished. 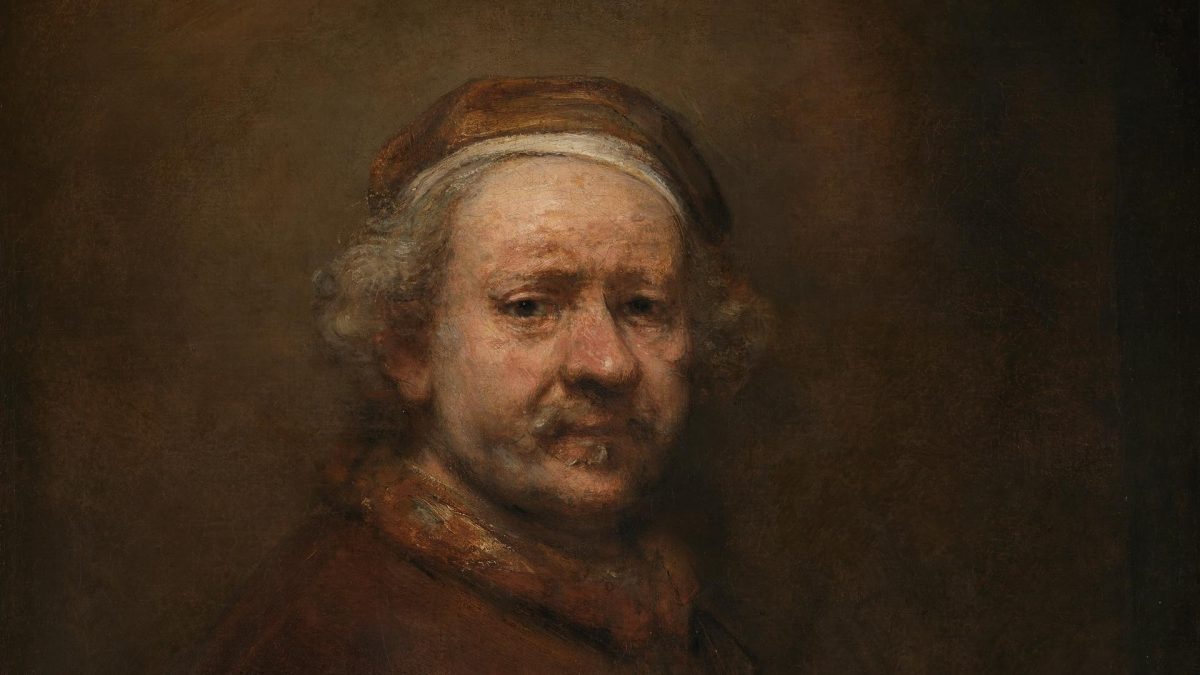 Rembrandt’s “Self Portrait at the Age of 63,” in the collection of the National Gallery, London.

Rembrandt was lucky. His parents had money. His wife had money. And he had money, almost from the start, from his art.

But he was also unlucky. This was the 1600s, after all. Only one of the four children he and his wife had together survived into adulthood. And soon after that child was born, his wife died.

Also, how to put it, Rembrandt didn’t look very far for sex—at least he probably didn’t look far enough. He hooked up with the wet nurse he hired to take care of his son, after his wife died. And then he got her committed to a poorhouse, after she pawned the jewelry he had given her.

Then he hooked up with his maid. In fact, he probably would have married her. But that would have cut him off from the trust fund, set up for his son, in his wife’s will. His wife had stipulated: you can have a new wife when I’m gone, or you can have my money. You can’t have both.

So, Rembrandt and the maid lived in sin, so to speak, and had a daughter together. And they paid the price anyway. She was literally called a whore by the Dutch Reformed Church, and was banned from communion. Rembrandt suffered in his work. He died a poor man, and was buried in an unmarked grave. And was eventually dug up and destroyed—whatever was left of him—to make way for someone else. 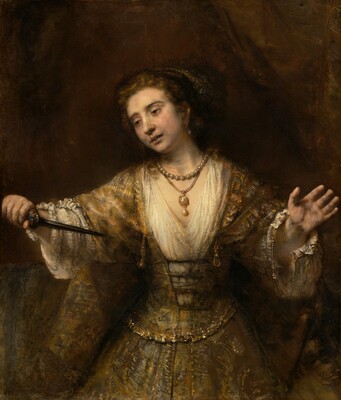 Rembrandt’s 1664 “Lucretia,” now in the collection of the National Gallery of Art.

Lucretia was not a real person, she was part of an ancient Roman myth, about a married noblewoman who is raped by a friend of her husband, and then kills herself to protect her virtue.

I know, it’s a terrible story, and—worse—it was told and retold as a kind of morality tale: get raped, it’s your fault.

Rembrandt painted Lucretia twice. He made the first painting soon after his lover died. In this picture, which is now at the National Gallery of Art, Lucretia looks pretty perfunctory, resigned to her fate. Like, oh well, I guess it’s the end for me.

Rembrandt made the second painting a couple years later, in 1666. By then, he had completely fallen apart. He was bankrupt, scandalized, utterly alone—and terribly bitter that his lover, at the hands of powerful men, had pretty much been humiliated to death. So there’s Lucretia, with the dagger. Pale. Anguished. Humiliated to death.

It was one of the last paintings he made. 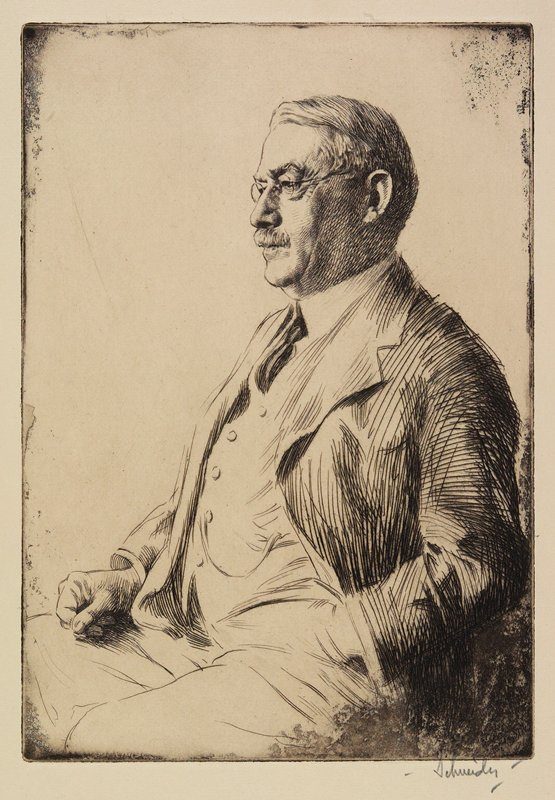 An etching of Herschel V. Jones by Otto Schneider, circa 1920–25. From the collection of the Minneapolis Institute of Art.

Let’s pick up another thread of this story. In 1861, a man named Herschel Vespassian Jones is born in a small town in the Catskills, in New York. A town that even now has less than 1,500 people.

But Herschel Jones is ambitious. And at 15, when his schooling is effectively over, he starts working at the local newspaper, and at 18 he buys the paper.

He gets married, and that same year, he moves the family to Minneapolis. And there he does kind of the same thing—he starts working at the Minneapolis Journal as a reporter. And eventually he buys it.

So, he starts collecting books as soon as he can, and ends up with several different collections that he creates and sells over the years, with some amazing finds, like original manuscripts from Mark Twain and William Butler Yeats. He starts collecting Americana, too: books and maps and letters that were central to, well, a white man’s view of American history then. A collection that Teddy Roosevelt encouraged him to start. He had met Teddy Roosevelt when he was a reporter, and they became friends.

Jones ends up collecting letters from Christopher Columbus and Amerigo Vespucci, the explorer that America is named after. And the first map that called this place America.

He was always looking for a deal. So when he eventually gets into buying art, it’s this instinct that leads him to buy thousands of art prints and donate them to the Minneapolis Institute of Art in 1916, one year after the museum opened.

And this is what he does for the rest of his life, buy and sell and donate, even as he’s running the newspaper. And even after the day, in the mid-1920s, when he realizes he’s really really sick.

Rembrandt died three years after painting his second Lucretia. And when his house was cleared out, and all the paintings that were left in there were inventoried, Lucretia wasn’t among them. She was already gone.

But eventually, many years later, the trail picks up. Lucretia was very possibly bought by the wealthy Duke of Lithuania in the late 1700s or early 1800s, and then disposed of by his grandson, who had squandered a great deal of that wealth.

In 1853, Lucretia surfaces at an auction in Paris, and an Englishman—a country squire kind of fellow—buys the painting. And then it trades hands a few more times until it disappears again, probably to a villa in Italy.

And there the painting likely sits, in the dark somewhere, for years and years, until it’s finally dusted off and sold, and crosses the Atlantic, and shows up in New York.

And there the painting is, where we began our story in 1926, with the art dealer who announces a long-lost find, up for grabs.

Within a year, someone grabs it.

That someone is Herschel Jones. The dealer assures him, in a letter, that it’s the finest Rembrandt in the world.

Jones takes his painting and hangs it in his home. On one of the nicest streets in Minneapolis: Park Avenue. This massive mansion with a curved portico in front, like the White House.

But Jones is sick. His heart is slowly giving out, and there’s no turning things around. He seemed to know this even when he was buying Lucretia. “It’s hard to die,” he told a colleague at the newspaper, “just when you have got things coming your way.”

He spends the last 18 months of his life in and out of the Mayo Clinic, in Rochester, just south of Minneapolis.

And then, within a year of buying Lucretia, he dies. 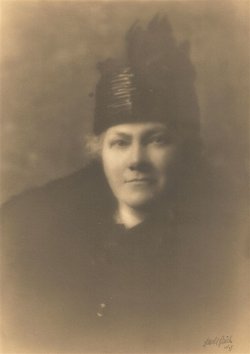 A photograph of Lydia Wilcox Jones.

The painting passes to his widow, Lydia Wilcox Jones. In her photos, Lydia has the direct gaze and set jaw of someone who suffers no fools. She was living in the same no-horse town in New York as her husband until she married him and moved to Minneapolis.

Now he’s gone and she has what’s left, including seven children. Which one would get Lucretia when Lydia’s gone?

She keeps the painting in the house for a few years. And then, being a practical person, Lydia decides it will be none of them—or all of them, in a sense.

She sells Lucretia in 1934, at something of a discount, to the Minneapolis Institute of Art, where anyone can see it. And so it begins another life of travel, as something of a calling card for the museum, an unexpected ace in the hand of a place that had only been around for 15 years.

Five years later, Lydia sells the newspaper. And that same year, in 1939, she sells the Americana collection. The Columbus letters, the America map—all of it.

Finally, she sells the house. And she moves in with her daughter, Tessie, in a quiet, beautiful home by the Hudson River in New York.

Some of Tessie’s brothers are no longer speaking, supposedly, after the sale of the newspaper, where they had been running things after their father died.

But Tessie is far away from all that. 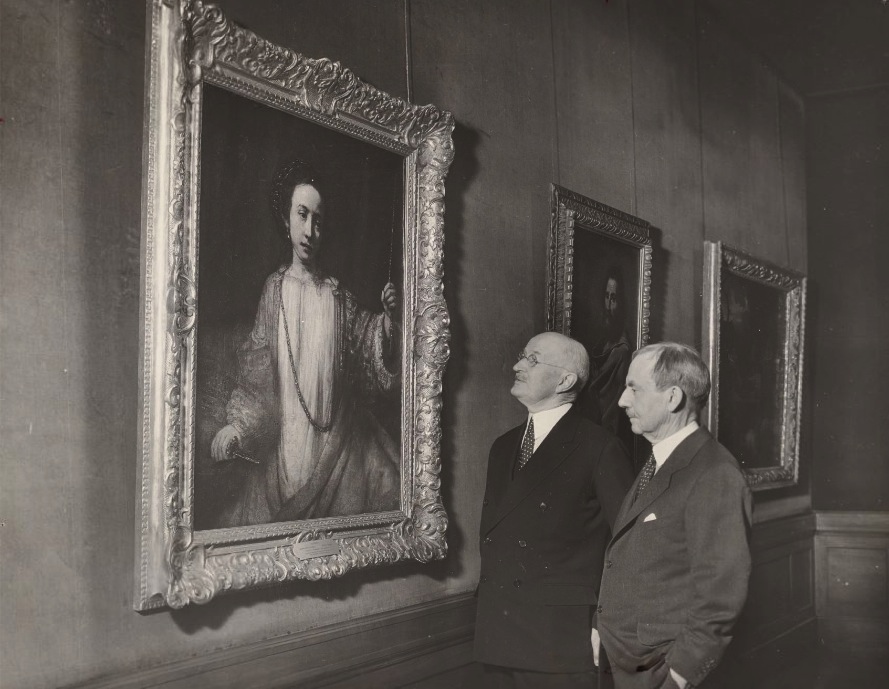 “Lucretia” being admired at the Minneapolis Institute of Art in 1935, shortly after its acquisition by John R. Van Derlip (left), the museum’s founding president, and Edward C. Gale, a vice president and trustee.

Tessie, too, in photographs, has the look of someone who knows herself. A little more wary perhaps, than her mother, but for good reason. She grew up the older sister of mostly boys, who inherited power along with money.

And now she’s over it—the testosterone, the family feuds—on the other side of the country. She’s never married. In a court opinion from 1974, she’s described, unkindly if matter of factly, as “a reclusive spinster possessed of considerable inherited wealth.”

But in fact she’s rarely alone. She’s living with her cook and her maid and her mother. And a collection of art and rare books that her father had left her.

Tessie, a year before she dies, gives a terrific cache of mostly Renaissance-era prints to the Minneapolis Institute of Art, including the first print her father ever collected, an engraving of the Virgin and Child about the size of a business card. And she plans in her will to give much more, including a dozen Old Master paintings.

Lydia and Tessie had watched a wealthy man accumulate all this stuff—books and papers and art—all these curiosities made by men for men, and collected by men. And now it was the women who were parting with it, bit by bit.

Eventually, when Tessie’s quite old, a neighbor friend moves in. A widow named Mrs. Weed.

In her will, Tessie leaves everything that hasn’t already been accounted for, to Mrs. Weed. The furniture, the china, the antique chandeliers, the Louis XV fireplace mantel. Down to the “miscellaneous bric-a-brac.”

When Mrs. Weed dies, a few years later, there is finally nothing left.