The gods of compassion: What bodhisattvas can teach us about sacrifice

The god arrived in 1917, boxed and braced on a bed of straw. Then, as now, its right hand was missing, along with several fingers on the left. The gold leaf and bright paint that once covered it was nearly gone except for a few flecks, especially on the back, where the elements and hands had hardly reached. It was more than 1300 years old. But the expression on its “delightfully dignified and lovely” face, as the museum announced to its members, was still “calm and benignant.” 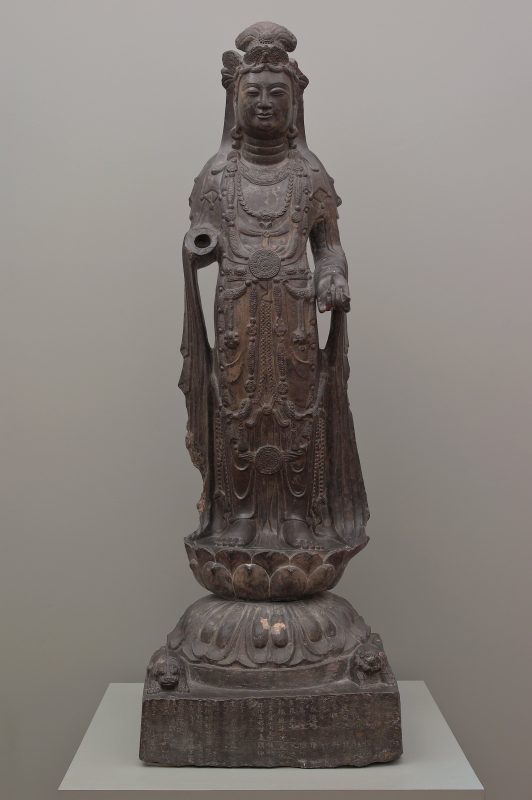 The standing bodhisattva, made by an unknown artist in China, that came to the Minneapolis Institute of Art in 1917.

The statue represents a bodhisattva. And when it arrived at the Minneapolis Institute of Art, more than a century ago, it was one of the 2-year-old museum’s first great coups. Now, the museum is filled with these deities—there are more than 300 representations or references to bodhisattvas in the collection. So many that a few years ago the museum decided it needed to settle on a single definition of what, exactly, they are: “a deity who has attained the highest level of enlightenment but delays entering paradise in order to aid other earthly beings.”

They are the helpers. In Buddhist temples and art, they often flank Shakyamuni, the historical Buddha—what the princely Siddartha Gautama became upon enlightenment. They are often seated or standing on a lotus blossom, holding a lotus bud or a wish-granting jewel. They are universally selfless and universally relaxed about it.

Some Buddhist teachers hold that we could all be bodhisattvas, if only we could stop being typical humans. If we were not so captive to our own desires, we could help others fulfill theirs—spiritually speaking, of course. And there’s the rub: As the late Zen priest Kosho Uchiyama put it, we have to look past our own position in life “regardless of what hell one might fall into.” A bodhisattva, he said, is “an ordinary person who acts like a true adult.”

This doesn’t come naturally. If it did, there wouldn’t be so many bodhisattva statues, reminders of the spiritual ideal. The bodhisattva that came to Mia in 1917 was once part of a Buddhist temple in the old walled village of Shih-An, in China, and when the villagers who paid for it pooled their money, in the sixth century, they offered some reasons in a long inscription on the base of the bodhisattva. “The forty-five members of the village community…,” it reads, “plant the precious root in the ground of virtue, so that it may blossom forth in the highest spirituality. They sow the seed of truth in the heart, so that it may bring forth fruit to the soul.” 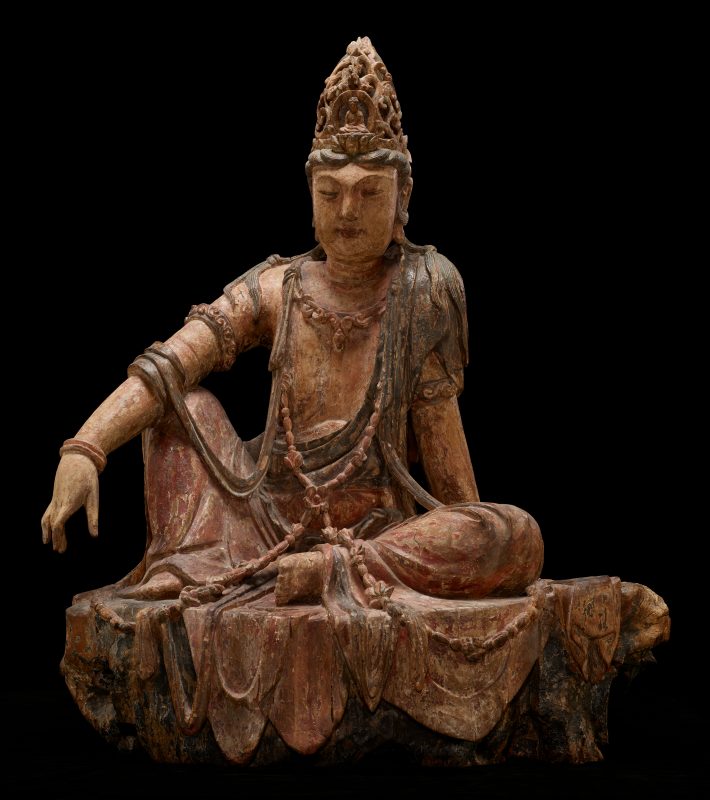 A bodhisattva from China in the water-moon form, now in the collection of the Minneapolis Institute of Art. The deity presided over his own paradise, a sea cave, from which he could admire the reflection of the moon on the water.

They had high hopes, in other words. And it would require, as the villagers inscribed, “the cooperation of all.” But it would also require a certain mindset, the Buddhist perspective that Kosho Uchiyama called, in Japanese, issai shujo to tomo ni—the notion that you are “together with all sentient beings,” come hell or high water. And you better be bodhisattva enough to take it.

Top image: Detail of the bodhisattva Guanyin, made by an unknown artist in China in the late 11th or early 12th centuries, now in the collection of the Minneapolis Institute of Art. A gift of Ruth and Bruce Dayton.