The Grace of Graciela Iturbide: A photographer’s empathic documenting of a culture not her own

Graciela Iturbide didn’t grow up wanting to be a photographer. She was born into a wealthy Catholic family, married young, and had three children. But in her late 20s, seeking distance from domestic life, she divorced and enrolled in film school. There, she met Mexican photographer Manuel Álvarez Bravo, with whom she began her first endeavors as a professional photographer. Together they began traveling and documenting the diverse communities of Mexico. For Iturbide, it would become a decades-long project.

More than a hundred of Iturbide’s photographs are now on view at the Minneapolis Institute of Art in “Graciela Iturbide’s Mexico,” an exhibition organized by curator of photography Kristen Gresh at the Museum of Fine Arts in Boston and curated at Mia by head of photography and new media Casey Riley. In one image, a crowned goat lays its head beside a pair of sandal-clad feet. In another, glittered and feathered cardboard wings adorn the side of a truck. Her photos are intimate, even poetic—perhaps because she didn’t just photograph her subjects, she got to know them. 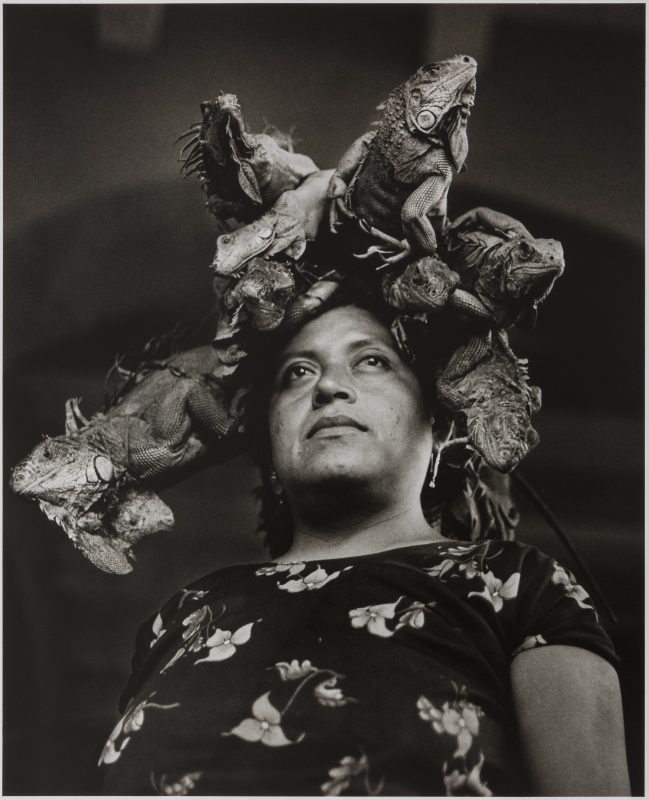 Take, for example, her portraits of Our Lady of Iguanas, a woman with the enormous lizards perched on her head. In the exhibition, you can see the contact sheets—a print of the roll of film she exposed, showing the entire sequence of images. “You can see the humor and the play in their interaction,” says Casey Riley, Mia’s curator of photography and new media. “It’s ridiculous—she’s got like eight lizards on her head. And it looks like eight lizards on her head, until that one photograph where she looks regal.”

In photographing communities that are not her own, Iturbide took on a task that can feel uncomfortable, even exploitative—which might be why she takes it so seriously. “[It] involves earning trust and working in partnership,” says Riley. “There’s a conversation around how one might be depicted.”

When Iturbide was documenting the Seri community of Northern Mexico, she spent nearly two months living with them in the Sonoran Desert. In an interview that accompanies the exhibition, she says, “They need to know I’m a photographer and give me permission. I never take a photo if they don’t want me to. It would show a lack of respect.”

Whether it be through the religious festivities of Chalma, or the ironwood carving traditions of the Seri, getting to know the communities she photographs is essential to Iturbide’s work. It’s an exercise in empathy, and gives her work a profound emotional dimension.

“She works very sensitively and very patiently with a subject to integrate the camera work into the work of the relationship,” says Riley. “She doesn’t want any of the people she documents to feel exploited. She understands the history of exploitation and oppression that colonialism enacted upon [people] — particularly indigenous people in Mexico.”

Iturbide even extends this empathy to her non-human subjects. In her botanical garden series, she anthropomorphizes plants recovering from various ailments, as though in intensive care. In one photograph, her shadow mirrors that of a palm tree, suggesting parallel lives. You can see the web of connection she strives to create between herself and other living creatures, says Riley. “Empathy isn’t something we’re endowed with, it’s work. It’s entering into a space of imagining that another person’s reality is real and worth discovering.”

Photography, of course, may seem inclined toward empathy, as a co-creation between photographer and subject. But Riley cautions against generalizations. She cites a series of daguerreotypes, now in Harvard’s Peabody Museum, made of enslaved Africans and African Americans in 1850 to support racist theories of white supremacy. The artist Carrie Mae Weems later incorporated some of these images in her series From Here I Saw What Happened and I Cried, revealing photography’s historic role in supporting stereotypes and exploitation.