The masterpiece home office: How to spiff up your pandemic pad with art from Mia

With work-from-home in full swing, are you finding your quarantine quarters a little lacking? Do you dread logging into the morning meeting, coveting your colleagues’ digs while you slump at your desk seemingly made of Legos and leftover Ikea hardware? Yes, the ideal home office is the new status symbol, and Mia is here to help with Zoom-ready rooms straight from the galleries.

Who wouldn’t want to brainstorm in the Studio of Gratifying Discourse? Or file those TPS reports from the sunny table in Pierre Bonnard’s Dining Room in the Country? You can even download the images from the links here, or grab them from the page, to make these aspirational offices your new Zoom background. Once you have the image on your desktop, simply navigate to Preferences in Zoom and click on Virtual Background. Add the image, select it for your new background, and your COVID crib will be the envy of the office. You’re welcome.

Dining Room in the Country 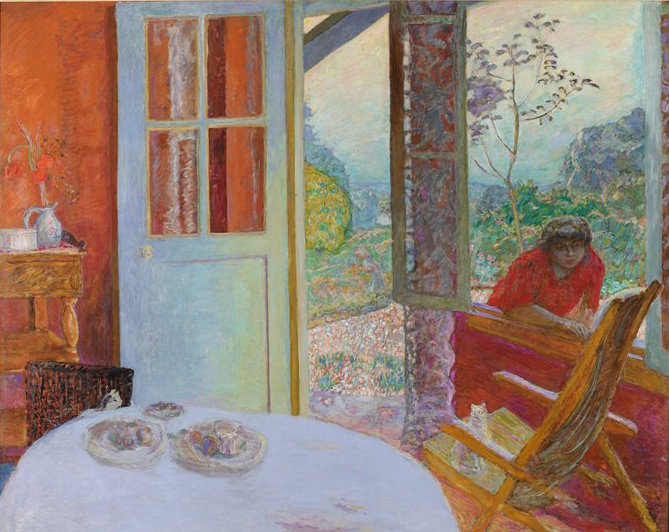 Dining Room in the Country, by Pierre Bonnard, 1913. Collection of the Minneapolis Institute of Art.

Pierre Bonnard was an artist and illustrator in fin de siècle France who considered himself the last of the Impressionists. In fact, he was one of the first Post-Impressionists, for those keeping score, influenced by the graphic arts of Japanese printmakers like Katsushika (The Wave) Hokusai. He made a comfortable living at it, in any case, and in 1912 he bought a country house in a small town on the Seine. That’s his wife leaning in, but the rest is more or less a feeling rendered in color, a desire you may be harboring right now: to throw open the house and take in some fresh air.

St. Jerome in His Study 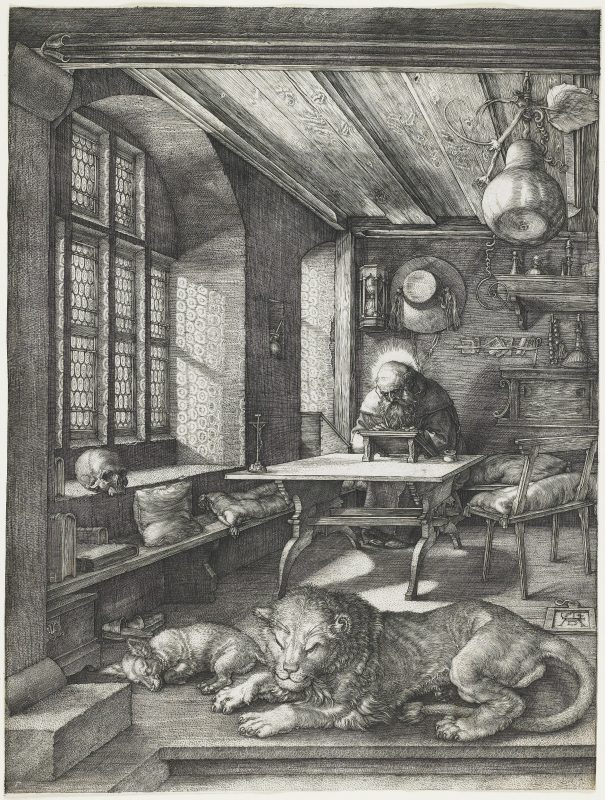 St. Jerome in His Study, by Albrecht Dürer, 1514. Collection of the Minneapolis Institute of Art.

When you have the patience of a saint, maybe you can work with an enormous lion at the foot of your desk. Of course, St. Jerome was said to have removed a thorn from the lion’s paw, so a grateful lion may be the best coworker of all—no one will bother you with an unwelcome ask, at least not more than once. The natural light is pretty great, too, coming through those circular panes, but if that’s not enough you’ll always have the supernatural light from your halo. Assuming, like St. Jerome—diligently translating the Bible from Greek and Hebrew into Latin—that you’re doing the Lord’s work.

The writing nook of the Purcell-Cutts House 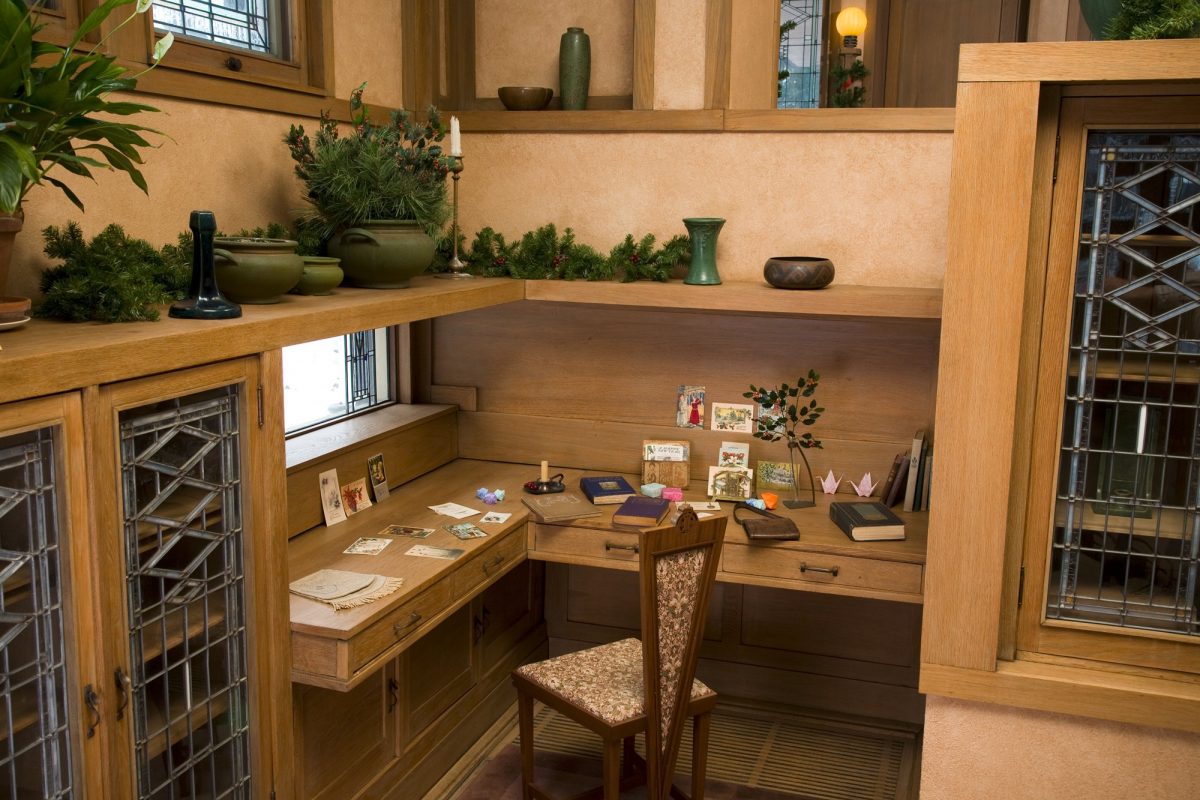 Inside the Purcell-Cutts House, a historic home in the collection of the Minneapolis Institute of Art.

Almost too modest to be called an office, this little nook in the living room of the Purcell-Cutts House was the sublime sanctuary of Edna Purcell, the wife of architect William Purcell, who would write letters and sort through photos here. In spring and summer, she could look out the long, rectangular window onto the blooms of a wildflower garden—replicated, abstractly, in a flower pattern on the window itself. The house was designed, in the Prairie School style, to make efficient use of space and to break down some of the old barriers between dining, living, and study spaces. “The useless division,” as William Purcell called it, “quietly slipped away,” replaced by spaces “all free and open, filled with soft light.”

The living room of the Prindle House 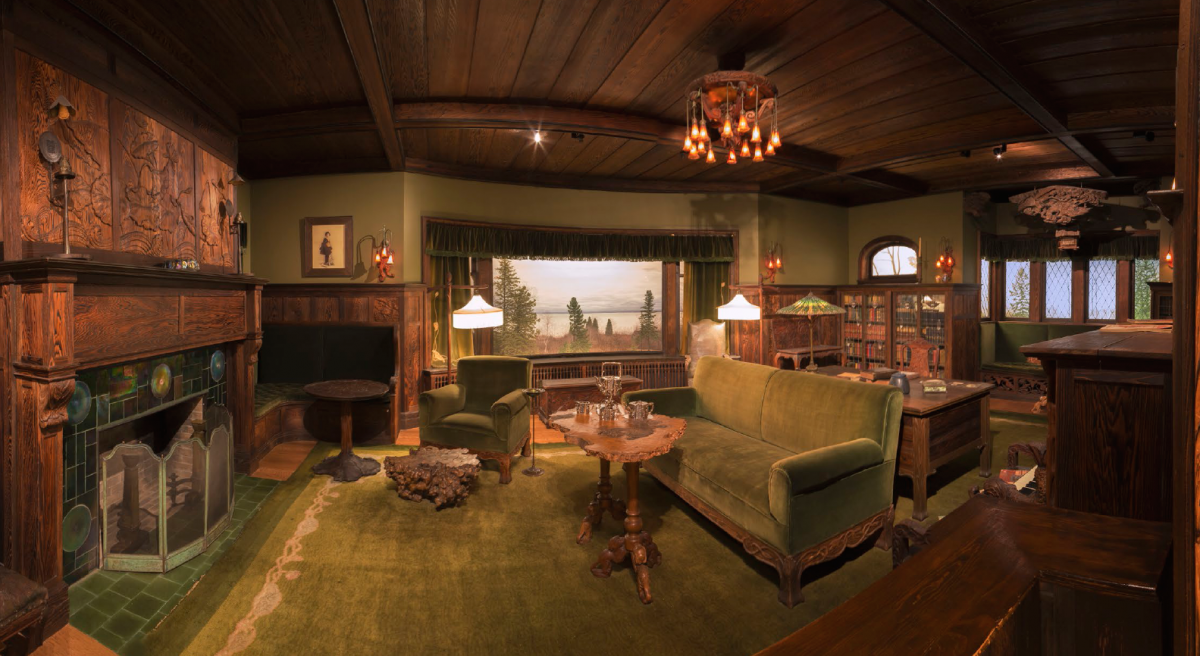 Living room of the Prindle House, with interior design by John S. Bradstreet in the early 1900s.

In the early 1900s, when John S. Bradstreet installed his Japanese-inspired designs in the Duluth mansion of the Prindle family, there were still caribou roaming the North Shore of Lake Superior and wolves at the edge of town. Indeed, in his white suits and and ties fashioned from upholstery fabric, Bradstreet took pride in expanding the tastes of the old Northwest, as the region was still known. The enormous wooden workspace behind the couch is a so-called partner desk, with drawers on both sides—the original co-working space. Another high-concept desk in the collection could function this way, but the real benefit of officing in the Duluth room, of course, is that you could swing around to the couch for a break by the fireplace. Or, if you’re co-parenting while co-working, your kid could be banging out the Frozen 2 soundtrack on the piano until you jump out that window onto the fake Superior shoreline below. 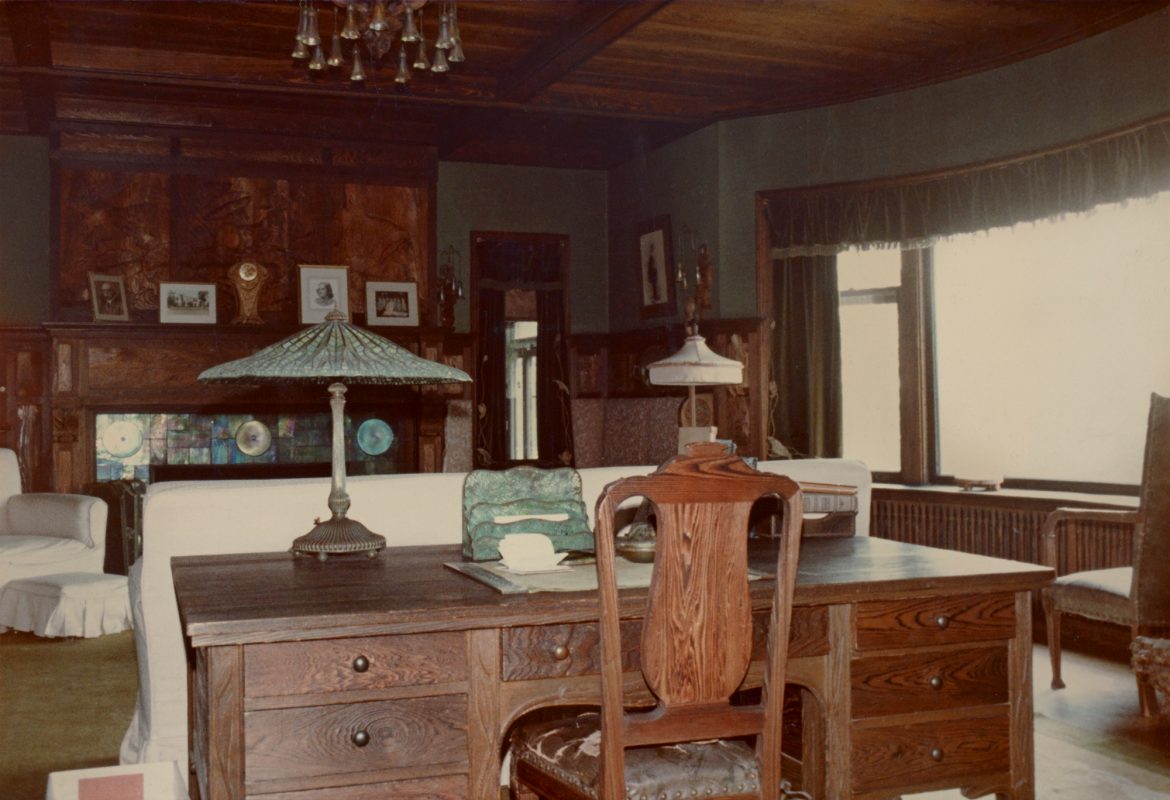 A closer look at the desk in the Prindle House living room, as it appeared before coming to Mia in 1982.

The Studio of Gratifying Discourse 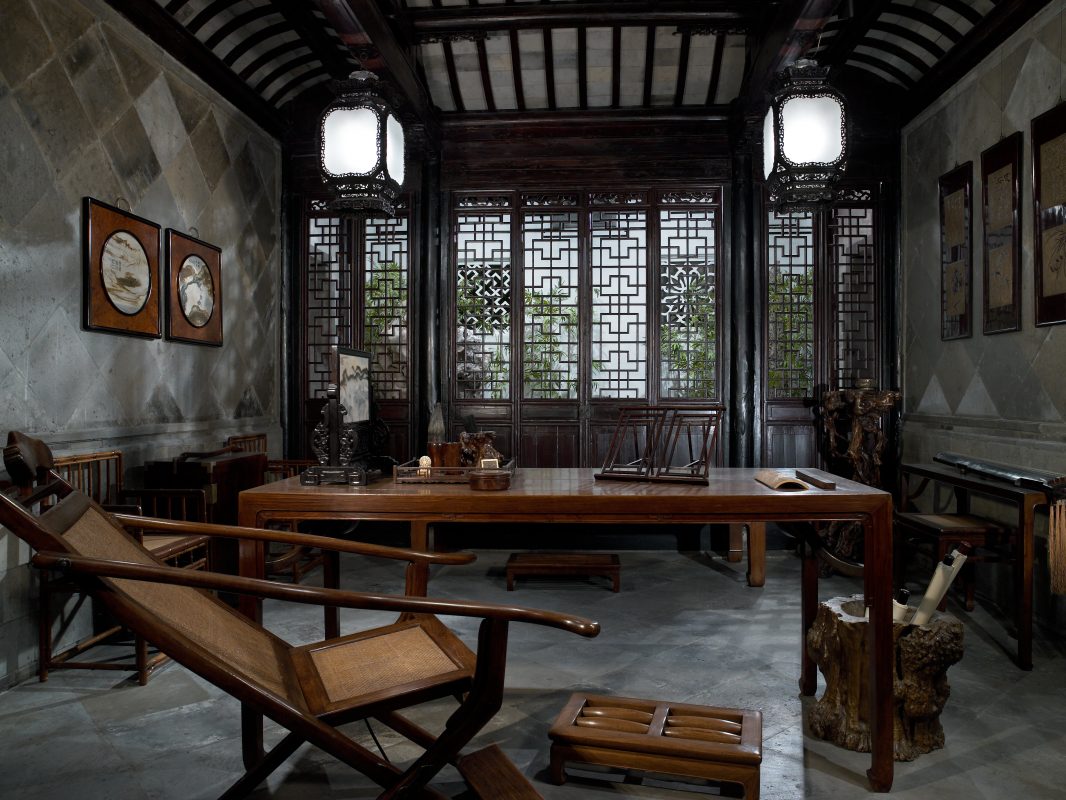 The Studio of Gratifying Discourse, from 1797, in the collection of the Minneapolis Institute of Art.

If you were a Chinese scholar at the dawn of the 19th century, when this library was built, you would have been vaguely aware that the world was becoming a powder keg, from the pressures of poverty and imperial ambition—the way that a sunbather on the beach is aware of the tide moving in. But you would have sat here, at the wooden desk, contemplating the wild shapes of the tai-hu stones in the rock garden outside and writing poems about chrysanthemums. You would have turned your feelings about nature and the meaning of things over and over in your mind until they were smoothed by the effort of self-examination. And then you would have put ink to paper, expressing yourself in the great tradition of literati, and it wouldn’t have mattered if the result was very good or not—it was the expression that mattered. That was the work of the literati, nice work if you can get it.