The uncompromising art and life of Louise Catherine Breslau

Among the earnest images of farmers, weavers, and other redoubtable peasants in “Reflections on Reality: Drawings and Paintings from the Weisberg Collection,” Mia’s quietly alluring show of Realist art, is a bored-looking boy in a blue shirt: Yves Österlund, age 9.

Österlund was the son of artists who worried he was too undisciplined for art school, and this portrait seems to confirm their fears. As Mia curator Tom Rassieur describes it, the boy appears “if not quite lazy, perhaps unfocused.” He sharpens his chalk distractedly, his desk in disarray. A half-eaten orange sits among his papers.

Many portrait artists would have conjured a more flattering image for their client. But not Louise Catherine Breslau, a friend of the family, who perhaps surprisingly made a good living painting the children of the bourgeoisie in the late 1800s and early 1900s. Indeed, Breslau was not one to compromise, in art or in life.

Breslau was born in Germany to Polish Jewish parents who soon moved the family to Switzerland. Her father died when she was 7 and Breslau was sent to a convent, ostensibly to treat her asthma. It was likely a mixture of boredom and industry, while confined to her room, that drove her to draw and paint incessantly until she was good enough to continue her training in Paris. Few art schools were open to women in the 1870s. But Rodolphe Julian sensed a missed opportunity in not catering to half the population, and he opened several ateliers of his Academie Julian to women—Breslau went to the only one that allowed her to draw from nude models.

Julian charged women more than men, reasoning that some well-to-do relative was probably paying their way, but this was not the case for Breslau—she had to work for a living and she knew it. Breslau’s dogged pursuit of her craft seems to have gotten under the skin of certain classmates, notably Marie Bashkirtseff, a wealthy Ukrainian beauty filled with both ambition and self-doubt. Bashkirtseff obsessed over her less endowed, more talented peer in a kind of art school Mean Girls. “I love to go to the booksellers and other people who, thanks to my unassuming dress, take me for a Breslau or someone of that class,” she wrote in her diary. “They look at you in a certain kindly, encouraging way, which is quite different from what I am accustomed to.”

Breslau’s caricature of Marie Bashkirtseff and teacher Tony Robert-Fleury (left). A caricature of Breslau herself (right) by an unknown artist.

Breslau seems not to have noticed. She did object to Bashkirtseff’s preening, however, enough to draw a caricature of her with one of the teachers. But mostly she kept her nose to the easel, to the point that someone drew a caricature of her in exactly that posture. Not that she didn’t have friends. Among her classmates was Madeleine Zillhardt, a younger artist who asked Breslau to make her portrait. Two years later, in 1886, when Zillhardt was 23 and Breslau was 30, they moved in together.

By then, Breslau had shown at the Paris Salon and opened her own studio, and she and Zillhardt became regulars in the Paris art scene, friends with people like Edgar Degas and Auguste Rodin, while living openly. They were parted only by Breslau’s death, in 1927. In this way, Breslau followed the path forged a generation earlier by Rosa Bonheur, the celebrated animal painter, who wore men’s clothes and lived with her partner Nathalie Micas for 45 years and never lost the support of the powers that be: she was rich by 30 and the French government awarded her the Legion of Honor.

While Bonheur painted horses and cattle and sheep, however, burnishing France’s self-image as a resourceful land of plenty, Breslau painted the people in her life—women, mostly, including herself and Zillhardt together. Her pictures have a directness that’s both disarming and intimidating, the subjects often gazing out at the viewer, whether lounging in bed or in the woods. As if they have nothing to hide. As if to say, this too is real—as real as a cow in a field. 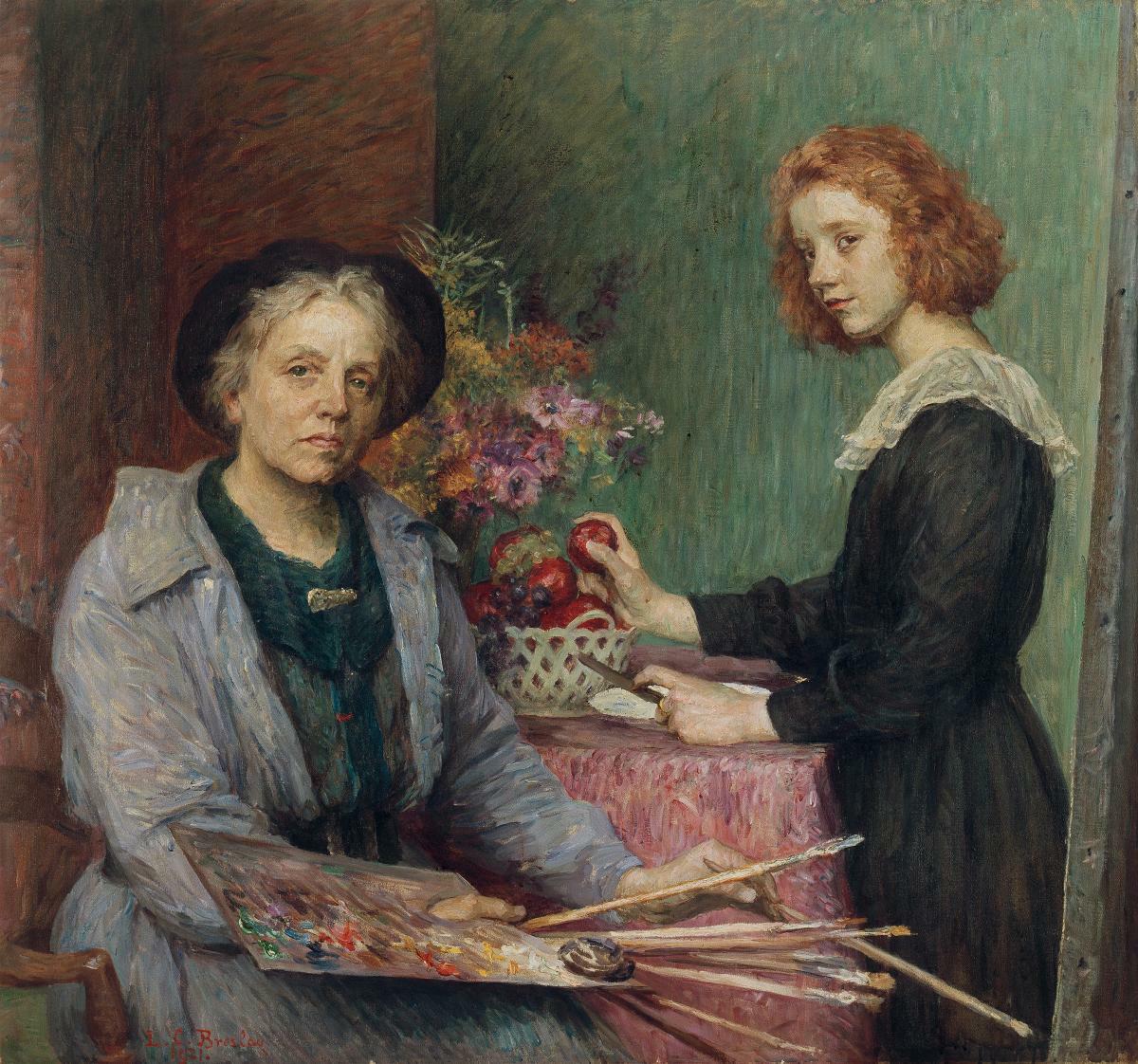 Like Bonheur, Breslau was awarded the French Legion of Honor—the first foreign woman to earn it. And she did earn it, overcoming just about every prejudice of the art world. Within a year of her death, a commemorative show of her paintings, pastels, and drawings, was held at the École des Beaux-Arts, in Paris. And in a pamphlet about her life and work, the art critic Arsene Alexandre asserted that “Louis-Catherine Breslau will be the prototype of those who, following the sacred rule formulated by Beethoven, will have had to pass through suffering to arrive at joy, an admirable joy but little envied.”

It would be the last major exhibition of Breslau’s work. But for a time, Zillhardt managed to keep her partner’s memory alive. In 1929, she acquired a former coal barge and renamed it the Louise-Catherine. And a friend of theirs, an heiress to the Singer sewing machine fortune, commissioned Le Corbusier, the modernist architect, to convert the boat into a stylish homeless shelter—with the idea of parking it in front of the Louvre. It didn’t last long. War intervened, the barge became a prison, and it sank a few years ago. But the gesture remains radical, to ask why beauty is for the few, the privileged. And what if we simply acted like it is not?