Who’s that girl? Why so many Native women artists are unnamed in museums

In just a few months, “Hearts of our People” will open at the Minneapolis Institute of Art, the first major exhibition of art by Native American women. In selecting the artworks for the show, we chose pieces by named makers as often as possible, rather than designate an item as anonymous from a particular culture. But this process wasn’t easy, because so often there was not a name associated with a work—an issue as common with Native women’s art as it is complicated. 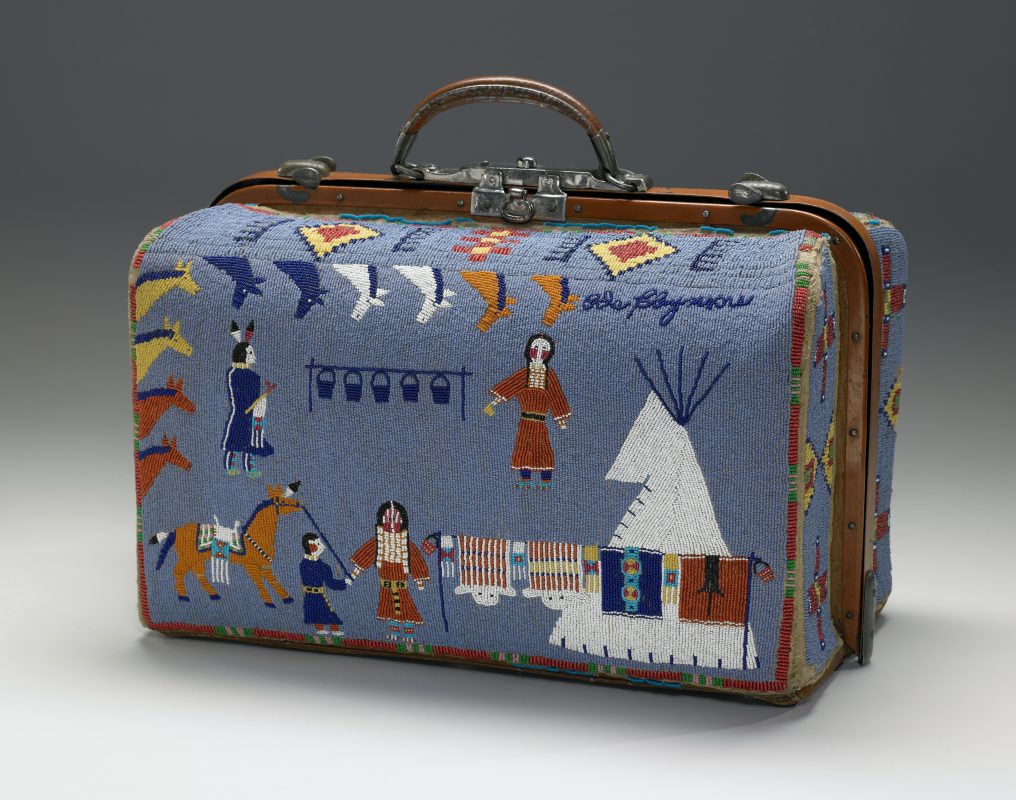 A beaded suitcase made by Nellie Two Bear Gates sometime between 1880 and 1910.

The idea of the anonymous Native artist, though popular in early collection practices, is misleading. It gives the impression that every person from a particular Native nation was exactly the same, leading to the idea that if you know something about one object from a culture, then you understand the society as a whole. And it gives the (false) impression that individuals were making things with little creativity and innovation.

But there is no single, monolithic Native culture. Instead there are groups of individuals banded together to form many Native nations. So why are so few of the earlier Native artworks attributed in collections to specific artists, especially in the case of women artists? Here are some very important reasons for this:

Be it ever so humble. Many Native nations held the ideal that a person should be humble. Therefore, a woman of good character and great skill certainly would never tout her elevated position, which she usually acquired because of her exceptional prowess at quilling, beading, hide tanning. or any other creative skills she possessed. In many Native nations, women advanced their standing in society through their art, the same way warriors advanced through their hunting skills.

Get it in writing. This was a driving philosophy of the Victorian era, when reason, logic, and proof were paramount—and collecting was taking off in Europe and the United States. But Native people didn’t write things down. There was no written record for Eurocentric scholars to peruse in order to glean their proof. No written world = no named artist. Just because these scholars didn’t know or write down the names of these artists doesn’t mean Native communities didn’t know who among them were the greatest at what they did. They just didn’t need to write it down; they already knew.

Let’s work together. Artworks were often created by many women working together to complete their important tasks. It would be difficult to name a maker of moccasins when one woman may have tanned the hide, another two quilled the vamp, and another tightly sewed the sole to the vamp. Women in the Plains region, for instance, often worked in guilds, shared the labor, and passed on their traditions—to name just one maker would have been a disservice to all of them.

Who’s in charge here? In the philosophies of many Native nations, both women and men came together to support each other and the group. While they had separate duties, none was considered more important than the other because all were needed. This was not the philosophy of the Eurocentric, Victorian-era male who had been taught to control and dominate the women in his world and his environment. As Eurocentric male anthropologists went out to research Native nations, through the lens of their perceived normal perspective, they made assumptions about Native male/female relationships. They assumed men were dominant, so they spoke to men, and they privileged information about men. Very little information about women seemed important to record. Furthermore, Native women often wouldn’t talk to men because it wouldn’t have been appropriate in many Nations. For these reasons, knowledge about women was often overlooked, lost, or only available as a small annotation among the records.

These are just a few reasons why the names of Native women makers from the 1600s to the 1930s have been lost to museums and other institutions. Luckily today there are still many strong Native women makers who are both working in the traditions of their ancestors and innovating in their own ways. And they are going to be difficult to forget.

Dakota Hoska is a research assistant in the Art of Africa and the Americas at the Minneapolis Institute of Art.