Inspiring wonder through the power of art.

The Minneapolis Institute of Art enriches the community by collecting, preserving, and making accessible outstanding works of art from the world’s diverse cultures.

In 1883, twenty-five citizens of Minneapolis founded the Minneapolis Society of Fine Arts, committing them to bringing the arts into the life of their community. More than a century later, the museum they created, the Minneapolis Institute of Art, stands as a monument to a remarkable history of civic involvement and cultural achievement.

Designed by the preeminent New York architectural firm McKim, Mead and White, the original building opened its doors in 1915. A neoclassical landmark in the Twin Cities, the museum expanded in 1974 with an addition designed by the late Japanese architect Kenzo Tange. In June 2006, the museum unveiled a new wing designed by architect Michael Graves.

The Target Wing was the result of a major renovation and expansion that included thirty-four new galleries, increasing exhibition space by 40 percent. The expansion included a new Lecture Hall, Photographs Study Room, Print Study Room, and an Art Research Library in a more visible location. The Graves design respectfully combined the neoclassical elegance of the original McKim, Mead & White 1915 building with the minimalism of Tange’s 1974 addition.

Mia’s permanent collection has grown from 800 works of art to more than 89,000 objects. The collection includes world-famous works that embody the highest levels of artistic achievement, our objects span from about 20,000 BCE and representing the world’s diverse cultures across six continents. The museum has seven curatorial areas: Arts of Africa & the Americas; Contemporary Art; Decorative Arts, Textiles & Sculpture; Asian Art; Paintings; Photography and New Media; and Prints and Drawings.

Mia is one of the largest arts educators in Minnesota. More than a half-million people visit the museum each year, and a hundred thousand more are reached through the museum’s Art Adventure program for elementary schoolchildren. The museum’s free general admission policy, public programs, classes for children and adults, and award-winning interactive media programs have helped to broaden and deepen this museum’s roots in the communities it serves. 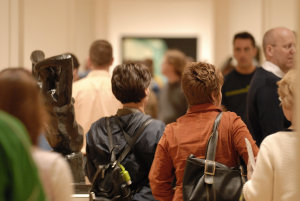 The Minneapolis Institute of Art is a free museum operated for the benefit of the general public.

Major annual support for museum operations and programs is provided by individuals, families, and organizations who support the museum annually through memberships and contributions.

The Minneapolis Institute of Art thanks these funders for their generous support of the museum.