When Mia began planning an exhibition of art by Native women, artistDyani White Hawk was among the first people consulted. White Hawk grew up in Wisconsin, negotiating her identity as a woman of mixed Lakota and European ancestry—a quest that shaped her early art. Since moving to Minnesota in 2011, she has in turn shaped the local art scene, serving as a gallery director and a curator while making paintings that blend traditions of abstraction from both Native and non-Native art.

Her advice, as one of nearly two dozen Native women involved in the creation of “Hearts of Our People: Native Women Artists,” helped the exhibition fulfill its potential as the first major show of its kind. “It’s meant to operate as a shift in power,” she says, a counter-weight to centuries of white male dominance in the art world.

“The story of Art with a capital A has been ‘who are the masters, who are the top dogs,’” she says, a story that elevated Western views of aesthetics and excluded Native women. “Our artworks carry teachings, carry stories—there’s a lot of cultural knowledge embedded in it. It’s more than just making something beautiful.”

In her studio in northeast Minneapolis, she explains the role of Native women as history keepers, a legacy honored by “Hearts of Our People.” Passing artistic techniques from one generation to the next—woman to woman—not only keeps the story going, it keeps the community going. “Aesthetics,” she says, “remind you how to be in the world.” 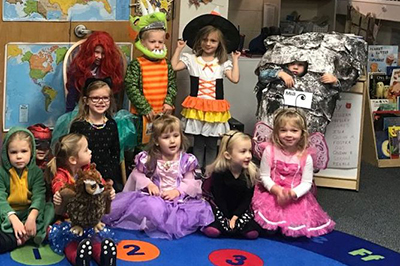 Pierce is smaller than most of the art at Mia; almost everything in the galleries is something he could imagine crawling into and staying a while. And so he did, last Halloween.

Working with artist Natchez Beaulieu and All My Relations Gallery, Mia engaged local youth to create a mural inspired by Mia’s “Hearts of Our People: Native Women Artists” exhibition. The project on the American Indian Cultural Corridor in Minneapolis was part of the 2019 Northern Spark, the late-night art festival mounted throughout the Twin Cities.

As part of the “Movies in the Parks” series in Minneapolis,
Mia presented three films about Native women in summer 2019 to approximately 175 people.

In summer 2019, Mobile Mia (the museum’s bicycle with an art-making station) visited 12 sites, engaging 514 youth and families. New this year, CarryOn Homes artists joined us for a week to deliver activities around the theme “My Story is My Home.”

Mia recently launched The Object podcast, using storytelling
about objects in our collection to explore race, class, immigration, gender, and other topics that continue to shape our world today. The curious, incredible, and sometimes heartbreaking stories shared in season one have already been heard more than 11,000 times.