Annie Young Quintana had been serving in the Air Force when, in in her late 30s, she began to lose her sight. By her 40th birthday, it was gone. She had been encouraged to take up painting, but it became frustrating and in a fit she threw the paints a friend had brought her against a wall, so hard they splattered.

That’s when it struck her: she knew how she could paint. Now she paints nearly every day, using a bar-code reader to tell her what’s in each paint tube, which are often labeled with notes to jog her memory, like the color of a dress she once wore or the color of a flower that once grew in the yard. She’s been painting full-time now for more than 10 years.

This year, she entered a piece in “Foot in the Door,” Mia’s once-a-decade show for all Minnesotans. It’s a watercolor of a flower, called Secrets She Keeps. Watercolors had long been intimidating but she pulled it off, and when the painting was accepted at Mia, she was ecstatic.

Annie’s art has been shown or collected throughout the world, including Antarctica, where she and her husband once went to run a marathon and found themselves stranded. The trip inspired a series she’s still working on, telling the extraordinary stories of ordinary people. But the chance to show with Mia feels different, a kind of inclusion she has long sought.

“My big dream has always been to have my art in the Minneapolis Institute of Art,” she says. “But the best part is that the museum had no idea I was blind, and to be accepted like that is huge. I just want my art to be seen for what it is. For me, that’s everything.”

Financial contributions from members make exhibitions and programs like “Foot in the Door” possible. Join or increase your membership level today! 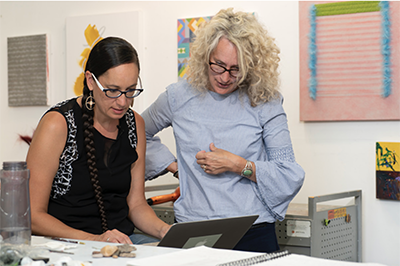 When Mia began planning an exhibition of art by Native women, artist Dyani White Hawk was among the first people consulted.
White Hawk grew up in Wisconsin, negotiating her identity as a woman of mixed Lakota and European ancestry—a quest that shaped her early art.