The Providence Parlor once occupied prime real estate on a wharf in Providence, Rhode Island. Its owners, brothers Joseph and William Russell, operated a prosperous merchant business that imported and exported goods by sea from all over the globe. Their store, The Sign of the Golden Eagle, offered a resplendent selection of imported fabrics, exotic spices, fine housewares, and large casks of rum, among other goods. Their market was the world, and the world, their market, made possible by trade winds and the labor of enslaved people.
With their wealth, the Russell Brothers built the first three-story home in Providence, with views of the harbor. They lived together there, along with Joseph’s wife and children. In the mid-1900s, parts of the historic house were sold; the rest still stands today. This installation brings the parlor, its original inhabitants, and its harborside location back to life.

This project is part of Living Rooms, an initiative to present Mia’s historic interiors and decorative arts collections in new ways. 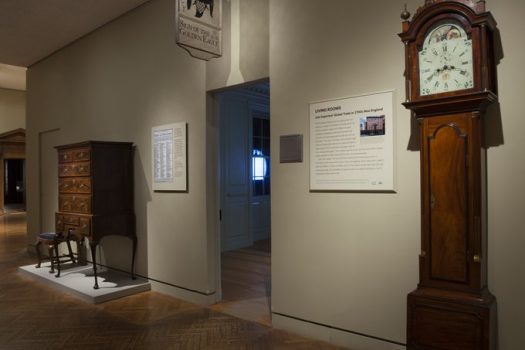 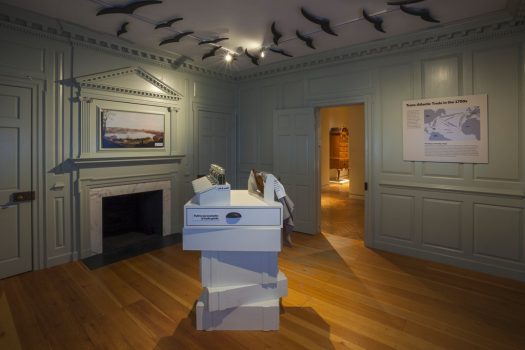 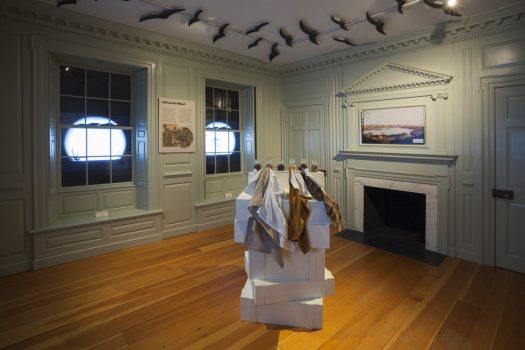 Life on the Wharf 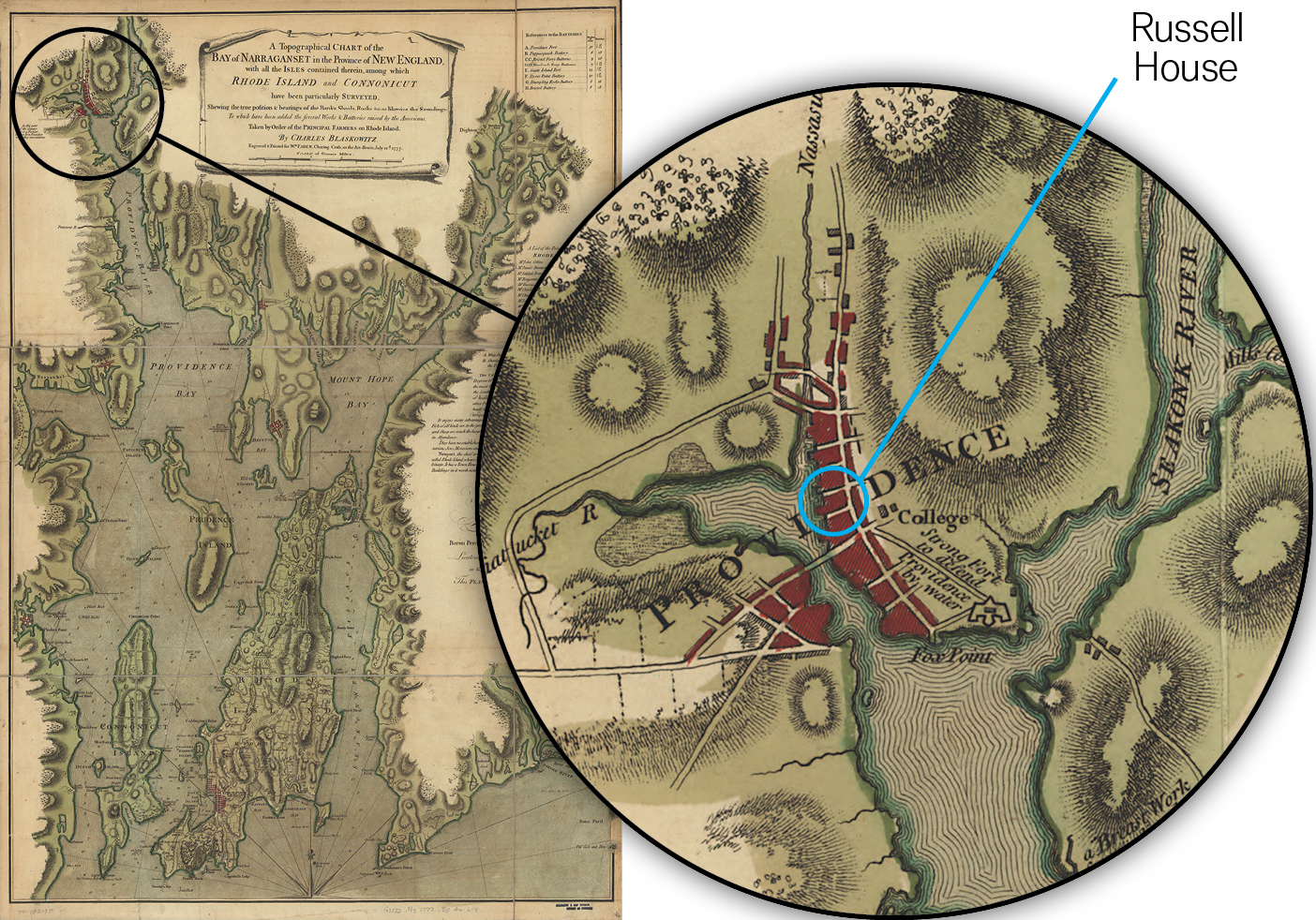 Joseph and William Russell’s house and shop, The Sign of the Golden Eagle, stood beside the Great Salt Cove. Protected from the weather, close to town, and navigable by boat, this vibrant waterfront neighborhood supported a booming seafaring economy. Here were the shops of blacksmiths, barrel-makers, and distillers, storehouses filled with everything from lumber and dried fish to velvets and mirrors, and popular taverns. The streetlife was enticing. Sailors and prostitutes, freed and enslaved African men and women, merchants, tradespeople, and shoppers—not to mention an unhealthy number of seagulls and wharf rats—filled the narrow streets and alleys. As a result, the wharf of Providence was a polyglot stew pot, on which people from Africa, the Americas, Asia, and Europe all converged in the name of trade.

A series of video vignettes featuring shadow puppets play in the windows of the Parlor to suggest the street life below the Russell’s house.

Trans-Atlantic Trade in the 1700s During the Russell brothers’ time in Providence, the wider Atlantic world—North and South America, the Caribbean, Europe, and Africa—felt both far away and near at hand. In search of profit, ships shuttled raw materials, finished goods, and enslaved Africans among islands and continents according to the laws of supply and demand.

Providence and the Slave Trade

To be a merchant in colonial Providence was to be involved, directly or indirectly, in the trans-Atlantic slave trade. The Russell brothers never sent a slave ship to Africa, but their boats were frequent visitors to the British West Indies. These Caribbean islands were populated almost entirely by enslaved Africans, forced to grow sugar cane. The Russells’ ships left Providence laden with low-quality food and finished goods made expressly for the West Indies—deemed good enough for enslaved people—and returned with sugar and molasses. The molasses was turned into rum in Providence’s many distilleries for domestic consumption and export abroad—including to Africa, in exchange for more enslaved people.

For Sale at the Sign of the Golden Eagle

The Russell brothers offered an incredible variety of goods sourced from around the world at their store, the Sign of the Golden Eagle, which likely occupied part of the first floor of their residence. They detailed their wares in advertisements placed in the Providence Gazette. The installation presents an interactive cabinet in which these goods, both replicas and the real thing, are displayed and labeled. 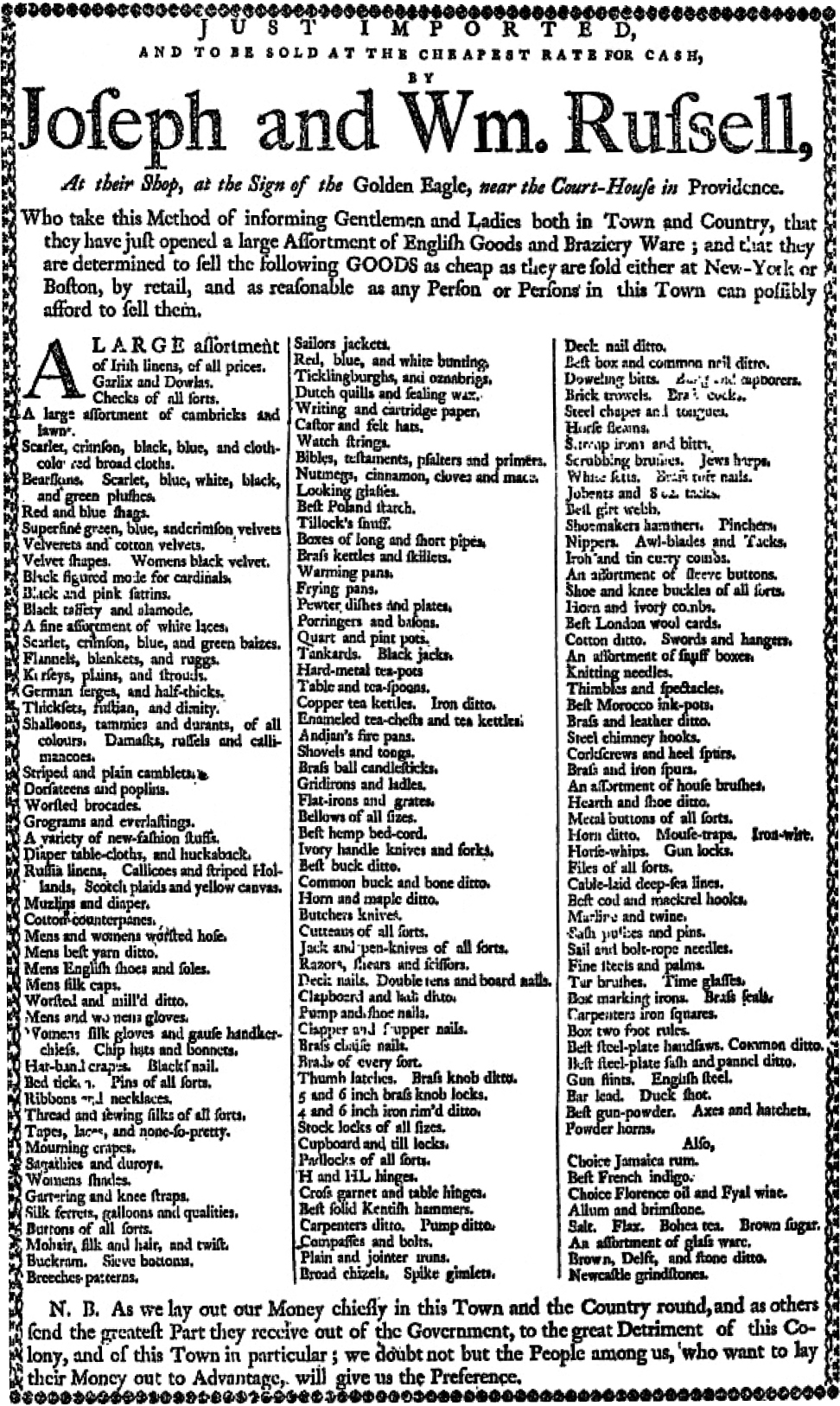 An advertisement for the Sign of the Golden Eagle in the February 21, 1767 Providence Gazette.

Sugar, a precious commodity in the 1700s, would have come in a hardened cone shape and wrapped in paper. Nippers were used to pinch off the desired amount

Spices and teas were sourced from many different countries in Asia, such as Indonesia, India, China, and islands nearby. Consumers used them as food preservatives, flavor enhancements, and stimulants, much as they do today.

Molasses is a syrupy by-product of the refinement process of sugarcane. It is the key ingredient in the manufacture of rum, one of the Colonies’ main exports. Sugarcane was grown in the West Indies through the labor of enslaved people.

An advertisement for The Sign of the Golden Eagle offers “French indigo,” probably from the French colony of Saint Domingue (Haiti). Like sugarcane, indigo was a crop grown by enslaved people.

An export good from the Colonies to Europe and Africa, tobacco was grown in Southern plantations that relied on the labor of enslaved Africans.

West Indies molasses was distilled into rum in Providence for export and local consumption.

Olive oil was enjoyed by many in colonial Rhode Island, including Portuguese whalers and fishermen who crewed ships, and the growing Jewish community, also from Portugal.

Before phones and computers, correspondence was handwritten. Writing tools and materials like quills, ink, and inkpots were in high demand.

A clay pipe would have made a useful companion to New World tobacco, grown in the southern Colonies.

Grooming items like this comb were typically made of tortoise shell, ivory, or horn.

Ropes, used in ship rigging, would have been common around the harbor.

A New England export, codfish would have been salted to preserve it for transport to the West Indies.

Apparel goods, like fabrics and finishes, were popular import items to the Colonies.

Plainwoven white textiles typically made of linen. Used in high-quality collars and ties for men, sleeve ruffles, and women’s collars and shawls.

A luxury fabric made of silk or cotton, in which case called velveteen or velveret. Used for curtains and fine garments.