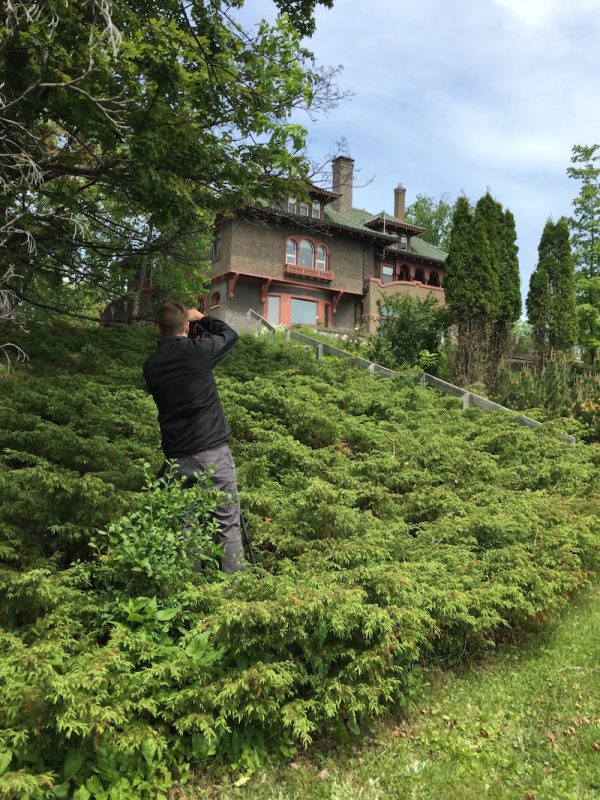 They come from far-flung places and times, but Mia’s period rooms look like they have always been here, and they appear as if their original owners just walked out the door. Each is a mix of fact and fiction, old and new. Each has a backstory. When visiting Mia’s North American period rooms, Minneapolis-based photographer Anthony Marchetti became interested in the artifice of these spaces, and especially the stories of how each room was disassembled in its original location, moved, then reassembled in the museum. After months of research in Mia’s curatorial archives, Marchetti traveled to photograph several of the rooms’ original sites.

His photos reunite the rooms with the contexts from which they were removed. This new series examines the displacement of these living spaces. This project is part of Living Rooms, an initiative to present Mia’s historic interiors and decorative arts collections in new ways. Generous support provided by the National Endowment for the Arts and donors at the 2014 Mia Gala. Since its invention, the photographic medium has had a varied and progressively troubled relationship with fact. Its connection to truth is increasingly questioned with each technical advance. “The American Period Rooms: Inside/Out” employs this tenuous relationship to call attention to the break between a period room’s original site and its current placement and display within the museum.

In each image, the combination of elements from a room’s original context and its subsequent museum installation leads us to consider how museums adapt and mediate historical narrative. Ultimately, space, like language, communicates meaning, and while truth remains elusive, subjects captured by the camera encourage reflection about the tension between fact and fiction. –Anthony Marchetti, 2016

How do you photograph the concept of history? Hear about Marchetti’s “Inside/Out” from Mia’s Tim Gihring and Diane Richard. The Connecticut Room was created around one original wall from a farmhouse near New Haven, Connecticut, built around 1740. The ornate paneling of the fireplace wall was the most significant architectural element of the house, which was tiny by modern standards, with only four rooms on two floors. In the 1920s, many houses built in the 1700s were knocked down or moved to make way for a reservoir called Lake Gaillard. It was at this time that the museum purchased the paneling and used it to create a new period room. Marchetti photographed the original farm site, now covered by the lake, in 2015. The artist has returned the hearth to its original location, as if it has risen out of the waters.

Hear an interview with the artist about the challenges of photographing a site—that’s now underwater. The Providence Parlor came from a house that was three stories tall—once among the tallest in Providence, Rhode Island. The home was built between 1760 and 1770. Then, in the early 1900s, the building was lifted and a new first floor added when it was renovated as a hotel. The original street-level entrance and woodwork remain but were raised with the rest of the building. They are now on the second floor. The interior was divvied up among three museums—Mia received the parlor in 1923. Other rooms went to the Brooklyn Museum and the Denver Art Museum.

Only scant traces of the original baseboard and trim remain in the original structure, which is now occupied by artists’ studios. Marchetti added the Providence Parlor’s interior paneling and windows to either side of the building’s original entrance.

Even historic houses evolve. Marchetti describes how he handled a tight spot. The Prindle Living Room is one of the rare period rooms in which almost everything is original, taken from the actual house built in 1906. Designed by John Bradstreet, the interior of the living room exhibited his trademark Japanese-inspired style, from the furniture to the carved wood paneling.

Today the home has been converted to an addiction prevention, treatment, and recovery center for women. To match the overgrown shrubbery and foliage now growing wild on the hillside, Marchetti copied the wood carvings from the room and adorned the mansion’s exterior with these intricate designs.

A new day. A new use. Hear about Marchetti’s approach to this Duluth house. Originally from Scotland, Colonel John Stuart was a wealthy resident of colonial Charleston, South Carolina. He served as the king’s superintendent of Indian affairs in the South. His house, built in 1772, still stands on Tradd Street. In 1927, Mia purchased two of the rooms, which are now presented as drawing and dining rooms.

In his photograph, artist Anthony Marchetti reunites these rooms with the present-day façade. The Charleston Drawing Room’s red velvet drapes replace whitewashed shutters, while its interior is just visible through the entryway. The MacFarlane Memorial Room is not actually a historic interior. The room was created in the mid-1970s to showcase hand-painted Chinese wallpaper donated by the McFarlane family. In 1982, Mia curators added a fireplace and woodwork copied from the historic 1796 Otis House in Boston. The period-appropriate furniture and a carpet add further context to the room. In his photograph, Marchetti reverses the direction of influence by covering the exterior of the Otis House in the MacFarlane Memorial Room’s exotic wallpaper.

Marchetti’s work shows how “period” can be a modern-day construction. Catch the wrap-up.