Men chop and gather wood, women turn grindstones, and a child rides on the back of a blue water buffalo. Preparations for New Year celebrations keep everyone busy in these scenes of traditional life in Laos, a country in Southeast Asia. What other activities can you find?

The English words on this blanket suggest that it was made for sale in America. But the blanket also helps preserve the history and traditions of a people uprooted by war.

Needlework is an important skill for women in traditional Hmong society. 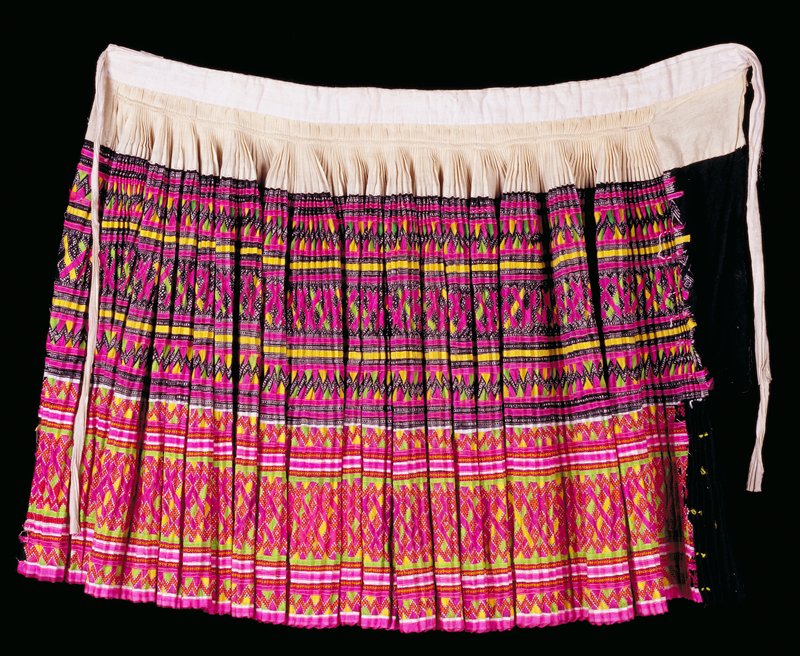 Blue Hmong women wear skirts like this one to celebrate the New Year.

In traditional Hmong culture, women make new clothes for their entire family for the celebration of the New Year. A new set of clothes reflects the good fortune of the year before. It also speaks of a hope for success in the year to come. Making new clothes by hand is a great deal of work. When a girl marries, it is her duty to help her new family make the new clothing. Well-sewn clothing is a source of pride for the whole family.

There are two main groups of Hmong in Laos. Each cultural group wears a unique style of clothing, which gives the group its name. White Hmong women wear a pleated white skirt for their New Year festival. Blue Hmong women (also called Green Hmong) are known for their indigo blue designs.

Patterns and designs can refer to other aspects of life as well. The zigzag border design around the villages on this blanket, for example, represents the mountains of Laos. It also is a symbol of protection from evil spirits.

The activities depicted on this story blanket recall a vanished way of life.

The Hmong settled in Laos in the 1800s, fleeing harsh treatment in China. They farmed land high in the mountains near the Chinese border. Few people lived in this region before their arrival. The Lao preferred to live in the fertile lowlands, where farming was easier.

The way of life shown on this blanket was shattered in the 1960s and 1970s. The Hmong helped Americans fight against communist forces in Vietnam, Laos, and Cambodia. After American troops left the region in 1975, the communist forces in Laos brutally punished the Hmong for their cooperation. Thousands of Hmong families fled to refugee camps in the neighboring country of Thailand.

Ka Zoua Lee sewed this blanket in a refugee camp in Thailand in 1980. By then, the scenes she embroidered on this story blanket were no longer a reality for many Hmong. She was most likely working from her own memories of the life she once had. Some story blankets record scenes of battles and refugee camps. Others, like this one, recall a peaceful way of life before the war.

A “story blanket” does more than tell stories.

Hmong women continued to practice traditional sewing methods in the refugee camps. But they turned their skills to a new type of pa ndau, the story blanket. International aid groups in the camps helped women sell their work in America and other countries. Thai traders bought their work to sell in tourist markets. The new form developed as women discovered that embroidered pictures sold better than their traditional costumes. Story blankets were often a family’s only source of income. They helped the Hmong survive the years of waiting in refugee camps.

Story blankets also became a way to strengthen the bonds among family members and preserve their history. Traditionally, only women had created pa ndau. In the camps, however, everyone had time on their hands. Almost every member of the family might be involved in the process. Men drew the scenes on the blanket. Women used those drawings as guides for creating the embroidery. Young children learned to sew the same way their mothers did, by watching and helping their elders. The scenes they sewed helped them get to know a way of life they could not experience.

Many Hmong families now live in Minnesota. These photographs by Wing Young Huie were taken in the Frogtown neighborhood of St. Paul in 1993 and 1994.

Many Hmong traditions have changed to reflect their new way of life, like this family celebration. Hmong families in Minnesota continue the tradition of wearing fine pa ndau to celebrate the New Year.

Ka Zoua Lee combined many scenes of life in Laos in her story blanket. What scenes of daily life would you choose for an artwork? Think about your food, clothing, chores, and celebrations. Draw several of those scenes, each on its own sheet of paper. Join them in rows to make a larger picture. Add a decorative border around the edge for a finishing touch.

Use the library or the internet to find out more about traditional Hmong New Year celebrations. What activities do you recognize in this story cloth? What other scenes might Ka Zoua Lee have included? Create a set of drawings based on your research and write a paragraph explaining each one. (Extra credit: Find out about Lao New Year celebrations, shown at the far right of the fourth row of the story blanket.)

Visit Mia’s website before you visit the museum to find out which Hmong needlework are currently on display and where they are. Because cloth can be damaged by light, these works of art are rotated frequently. What do the works you see at the museum have in common with Ka Zoua Lee’s story blanket? How are they different?