Artist Martha Rosler wanted to bring the war home. As the Vietnam War escalated half a world away, she wanted Americans to recognize their proximity to it, and perhaps even their complicity with it.

She did just that in the work that appears in “Artists Respond: American Art and the Vietnam War, 1965–1975,” an exhibition organized by the Smithsonian American Art Museum and now on view at Mia. It demonstrates how Rosler, like other artists, used her medium as a way to draw attention to the horror of the war raging overseas, while the mainstream media underplayed it. 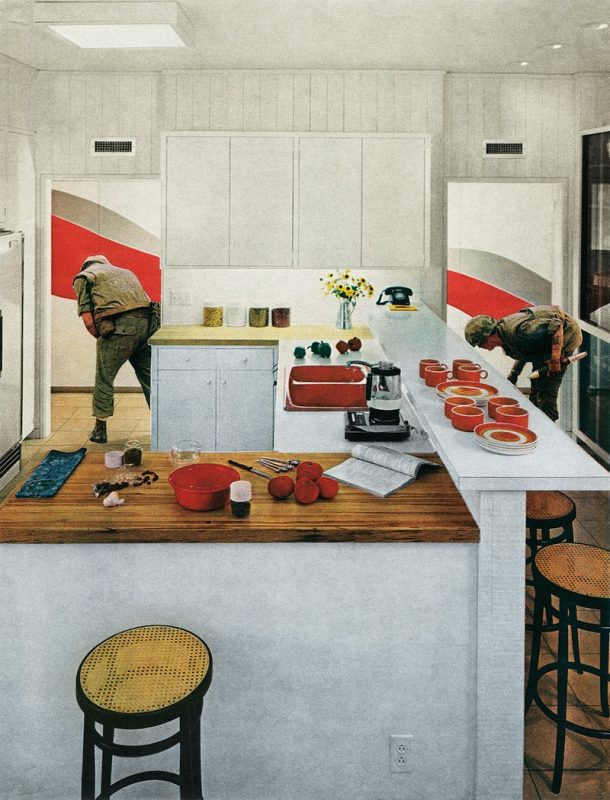 Rosler began her career as an abstract painter. As the world around her was changing, however, she cast aside this practice in favor of one as important as it was transgressive. All too often, she felt, people were desensitized to horrific imagery by the sheer volume of what was filtering into their homes from the so-called first televised war. With House Beautiful: Bringing the War Home, the series of photomontages that she began in 1967, she sought to disrupt the calm veneer of the home with the very real events that were taking place abroad.

In the series of approximately twenty collages, Rosler took advantage of the cache of images taken by photojournalists in Vietnam. By placing these images within glossy pictures from interior decorating magazines, she created an uncomfortable paradox, agitating viewers and forcing them to see and feel the crisis at hand. Her collage Vacation Getaway, for instance,features a photograph of an upscale living room, but the serenity is interrupted by Rosler’s intervention. Just outside the vast windows appear GIs in a war zone. The living room that was and remains a symbol of American domesticity and comfort is now marred by the realities of war.

Though Rosler was a trained artist and active in the high arts scene, these works were not displayed on gallery walls, but in the pages of underground publications (publications independently produced outside of the mainstream press) and passed out as flyers at protests. In fact, Rosler felt quite passionately that she shouldn’t profit from such displays of trauma, but instead use them to disrupt and defy — a goal shared by the underground newspapers where she displayed this work.

Rosler’s collages were featured prominently in Goodbye to all that!, a San Diego feminist publication that started out of frustration with the culture of the male-dominated underground press and its content, which often featured sex and pornography and disregarded important issues affecting women. Rosler’s work, after all, was not only a critique of the war, it was a critique of the prevailing view of women.

The home was a safe haven for many Americans from the realities of war. But the domestic space, so frequently tended to by women, was also full of tropes of femininity and womanhood. By drawing attention to these conventions, Rosler questioned the uneasy bargain at the heart of the American home, where everyone knew their place. Conflict was not “very far away, in a place we couldn’t imagine,” as Rosler put it—it was right there in the living room.

Top image: “Cleaning the Drapes,” a photomontage from Martha Rosler’s series House Beautiful: Bringing the War Home (c. 1967–72), featured in the exhibition “Artists Respond: American Art and the Vietnam War, 1965–1975” at the Minneapolis Institute of Art.