Julie Buffalohead on tricksters, colonizers, and the state of Native art

In the world of Julie Buffalohead, coyotes wear tutus, host tea parties, and play with shadow puppets. They, and their fellow animals, are allegorical figures — stand-ins for subjects both overtly political and deeply personal.

Now, one of Buffalohead’s anthropomorphic fables, called The Garden (a sly commentary on the controversy over a scaffold sculpture at the Minneapolis Sculpture Garden), is at Mia as part of “Hearts of Our People: Native Women Art,” the first major exhibition of art by Native American women. On June 27, Buffalohead appeared at Mia for a conversation about her art with Jill Ahlberg Yohe, the museum’s Associate Curator of Native American Art.

At the evening’s onset, with an image of Buffalohead’s piece Trickster Showdown projected above their heads, Ahlberg Yohe asked Buffalohead to introduce herself. “I guess I’m gonna have to,” Buffalohead laughed. A member of the Ponca tribe, she grew up in Minnesota and now lives and works in St. Paul. She found refuge in art from a young age, and eventually earned a BFA at the Minneapolis College of Art and Design as well as an MFA from Cornell. 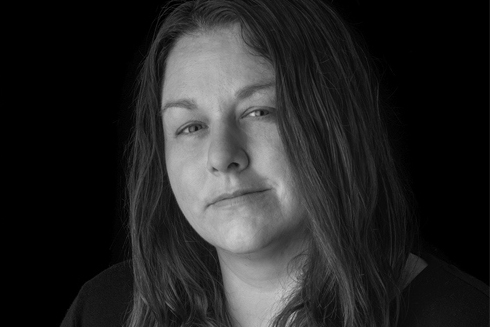 In high school, I floated through trying to be like everyone else,” she said. “I thought there was safety in that and later learned that there really wasn’t.” When she arrived at MCAD, “people had purple hair and nose rings,” she recalled — it was a place where people could be themselves.

For Buffalohead, her identity is and has always been intimately tied to her tribe and culture. In her work, this often shows up in the form of Native storytelling devices and motifs, like the coyote trickster figure. “He introduces chaos into the world,” Buffalohead said. “He represents what it means to be a human being and I was always very attracted to that.”

Of course, animals in general are deeply ingrained in Native storytelling tradition. “I guess I just see animals as something you can learn from,” Buffalohead said. “I’m always waiting for them to talk again.”

In her work Revisionist History Lesson, she depicts a fox wielding shadow puppets : a rabbit, a pilgrim ship, a turtle, and the North American continent. “Native people often think the continent of North America is a turtle shell,” said Buffalohead. “It’s a really simple thing but it has some meaning for me.”

Buffalohead also uses animals as a means of self-representation. In Why I Hate Bras, she illustrates a coyote relaxing on its back — pleased to be free from its restrictive clothing. It’s a sort of self-portrait, she said, “a way for me to disguise myself as one of my characters.”

In other pieces, like You Are On Indian Land (referencing the Dakota Pipeline), she is overtly political. “These were objects that colonizers were putting there, but it was our land,” Buffalohead said. The Garden, about the offensive scaffold sculpture, is similarly direct in its messaging even if animals are delivering it—chomping on the sculpture garden’s familiar depictions of a cherry and chicken. 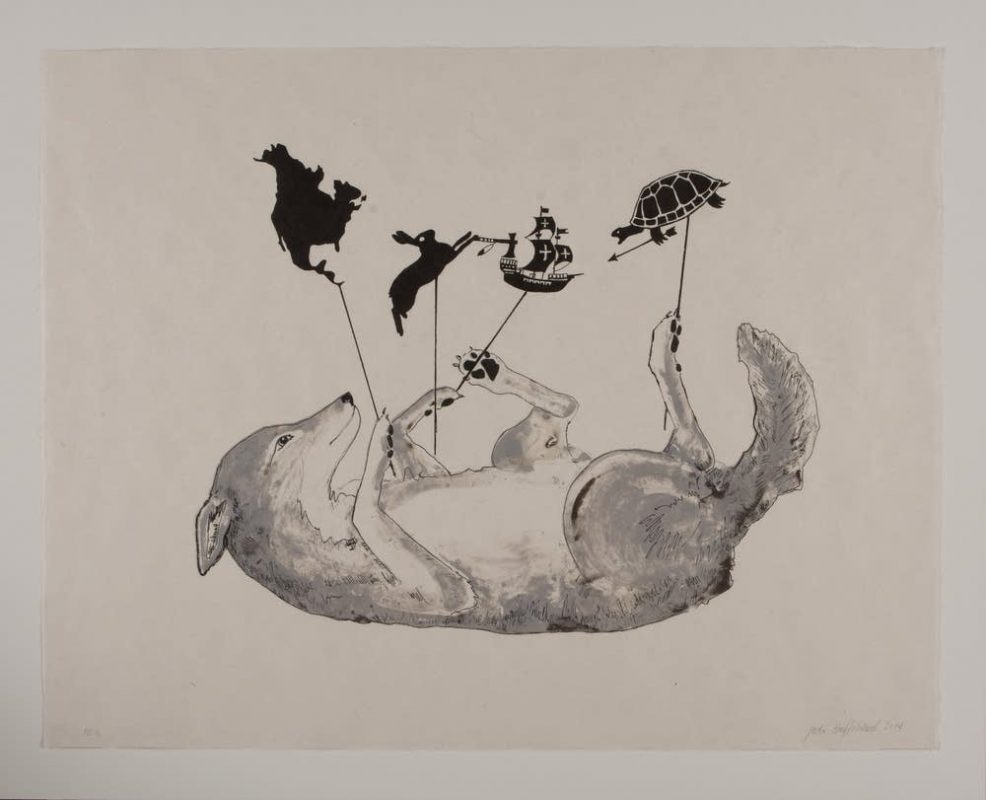 Throughout her work, whether personal or political, Buffalohead’s images are imbued with reverence for her cultural heritage. Buffalohead pointed to a decorative motif in the margin of her work Mother of Veracity. It’s derived from traditional Native patterns, originally cut from ribbon and hand-stitched. Native people took ribbons, beads — things given to them by traders—and created something entirely new, said Buffalohead. “They were like the contemporary artists of their day.”

As for the current state of Native art, Buffalohead would like to see better representation. “I wish we would start seeing Native artists represented internationally,” she said. They’re not often given the chance, she suggested, “because people want to see Native people as part of the past.”