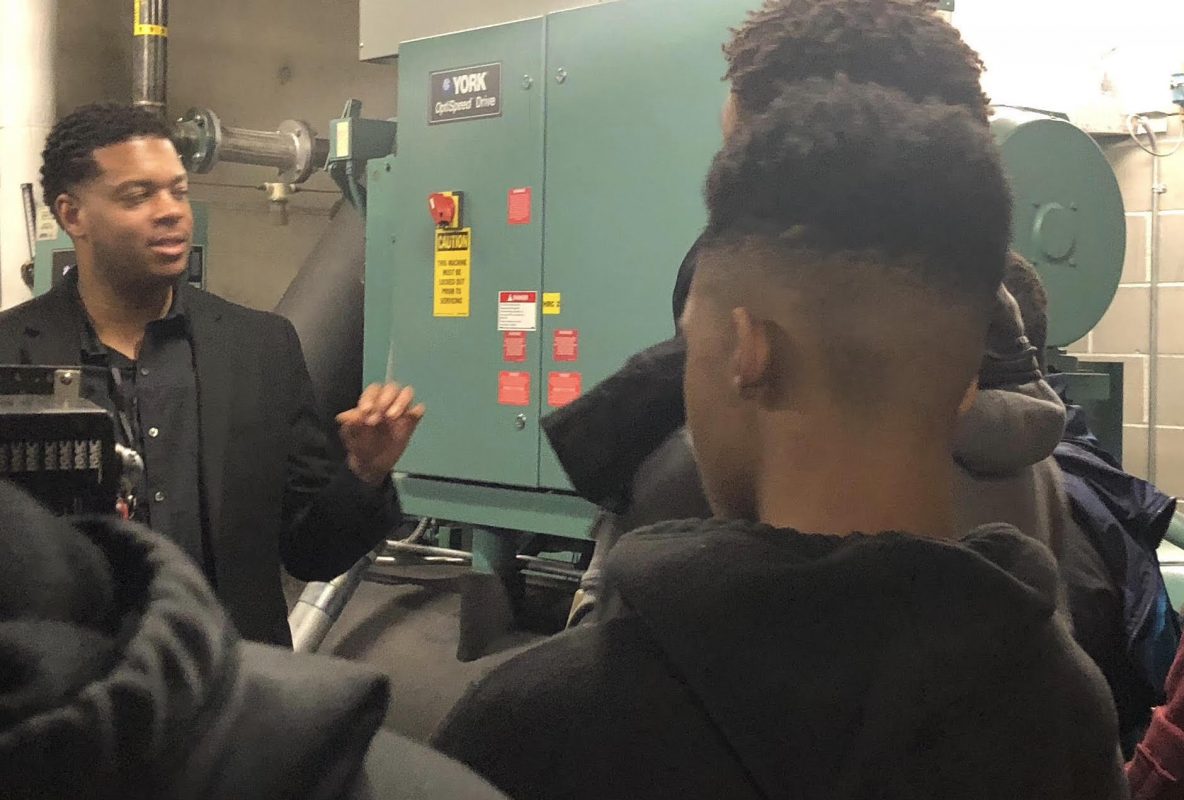 In late 2017, Leon Tazel III called Mia’s department of student and teacher learning to “see what we can make happen.” A partnership of some kind. He set the stage for his request with a story. The true story of the day in 2013 when he accompanied his teenage daughter to an urban juvenile detention center where she needed to appear as a witness to a fight at her school. What he noticed there was the number of young African American men with no adult males to support them. Some had moms or other female adults with them, but where were the dads?

This image struck Mr. Tazel deeply. And it inspired him to create the Tazel Institute to connect young African American men with positive black role models in top positions at corporations and businesses in the Twin Cities. He aspires to educate and expose black male high school students to the inner workings of professional business in the many industries that make up Minnesota’s economy. He takes vacation from his job in human resources at TCF National Bank to do this passion work of connecting students and leaders. And he asks a good deal of his community partners, too: a four-year commitment to the program.

Leon Tazel, at right, with one of the young men in his Tazel Institute.

The Tazel Institute started small, working with 20 students from Park High School in Cottage Grove and Rosemont High School in 2015, and connecting them to a county attorney, a water utility owner, police officers, and construction company leaders. The program has since grown to include more students, more school districts, and more partners—now including Mia. “We hadn’t ventured into the arts yet,” Mr. Tazel says, explaining why he reached out. “I thought of the museum as a great place to start.”

Last year, on Valentine’s Day, the partnership kicked off. Forty students from four schools, joined by supportive adults from the business community, gathered at Mia. They talked with Tom Lyons, Mia’s director of facilities, about his life, education, career path, writing (he is a novelist!), and responsibilities overseeing a nearly eight-acre campus with about 80,000 artworks and more than half a million visitors every year. They toured the mechanical rooms that keep everything running and galleries of African and African-American art. They shared their own stories, too.

“I am pleased to be in a position to inspire these young Men,” says Mr. Lyons of his involvement. “We need more people like Mr. Tazel working in our community, people who understand the power of exposing children to positive atmospheres. Exposure to the arts is key to expanding the mind—art museums are literally a window to the world.” Mr. Tazel couldn’t agree more. “The partnership between Mia and The Tazel Institute is a win-win,” he says, “we are appreciative of the effort shown to make us welcome to an institution that has so much to offer.”

This February, Mia marks Black History Month with tours, online stories, and the opening of its “Mapping Black Identities” exhibition. It’s also looking to the future, welcoming another group of Tazel Institute students, including those from two new partner schools in St. Paul. They, too, will meet with Mr. Lyons, explore careers in the arts and mechanical engineering, and connect with African art—including a tour of “Egypt’s Sunken Cities.”

“We are committed to ‘Gettin our learn on,’” says Mr. Tazel, referring to the organization’s new slogan. “There will never be a more powerful combination of education than the marriage of formal and informal education. We strive to provide our young men with exactly that. Seeing men that resemble them is powerful and cannot be replaced by knowledge alone. Life is about seeing yourself as a participant, not an outcast.”

Top image: Tom Lyons talks about his work at Mia with young men from the Tazel Institute.