Renaissance man: Why Botticelli still matters (maybe more than ever)

A few weeks ago, as the long hot summer in Minnesota began to cool, I called up Eike Schmidt, the director of the Uffizi Galleries, in Florence, Italy. For six years, Schmidt had been the head of Decorative Arts, Textiles, and Sculpture at Mia. He is tall, with a deep voice, a dry wit, and little pretension. When I reach him, he’s on the patio of his home in a polo shirt, his dog at his feet. Earlier in his career, as a curator at the J. Paul Getty Museum, in Los Angeles, his penchant for obscure knowledge had earned him the sobriquet “Eikepedia.”

Schmidt has led the Uffizi since 2015, guiding the venerable museum onto Tik Tok and into NFTs, and for the past few years he and his staff have collaborated with Mia to create “Botticelli and Renaissance Florence: Masterworks from the Uffizi,” a major exhibition opening this month in Minneapolis—its only destination. Many of the works in the show have rarely traveled, and the Botticelli paintings and drawings that form its nucleus amount to one of the largest displays of the artist’s oeuvre ever staged on this side of the Atlantic. “The Florentines are very jealous of their masterpieces,” Schmidt tells me, “as is the government in Rome.” Nevertheless, they were persuaded to share.

Perhaps not a moment too soon. As the pandemic, rising inequality, and a new strain of authoritarianism have rattled democracies around the world, the Renaissance suddenly feels relevant, Schmidt says. Not distracting or soothing, like some art, but inspiring. Galvanizing, even. It was the Renaissance, after all, that ultimately spurred the pursuit of certain inalienable rights, among them life, liberty, and happiness. And it began, like our present moment, in the wake of a plague.

In the 1350s, when the Renaissance arguably originated in Florence, the population of the city-state was less than half of what it had been just a few years prior, before the Black Death passed through in 1348. By the time Botticelli came along in the 1440s, nearly a century later, the city was booming—if not in population, then in commerce and creativity. Global trade had enriched its merchant class and ruling families, the Medicis especially, whose power and patronage fueled the new era of rinascita, or rebirth. The old world was literally dead. The old ways were dying. To move forward, people began to look back—all the way to the classical era. 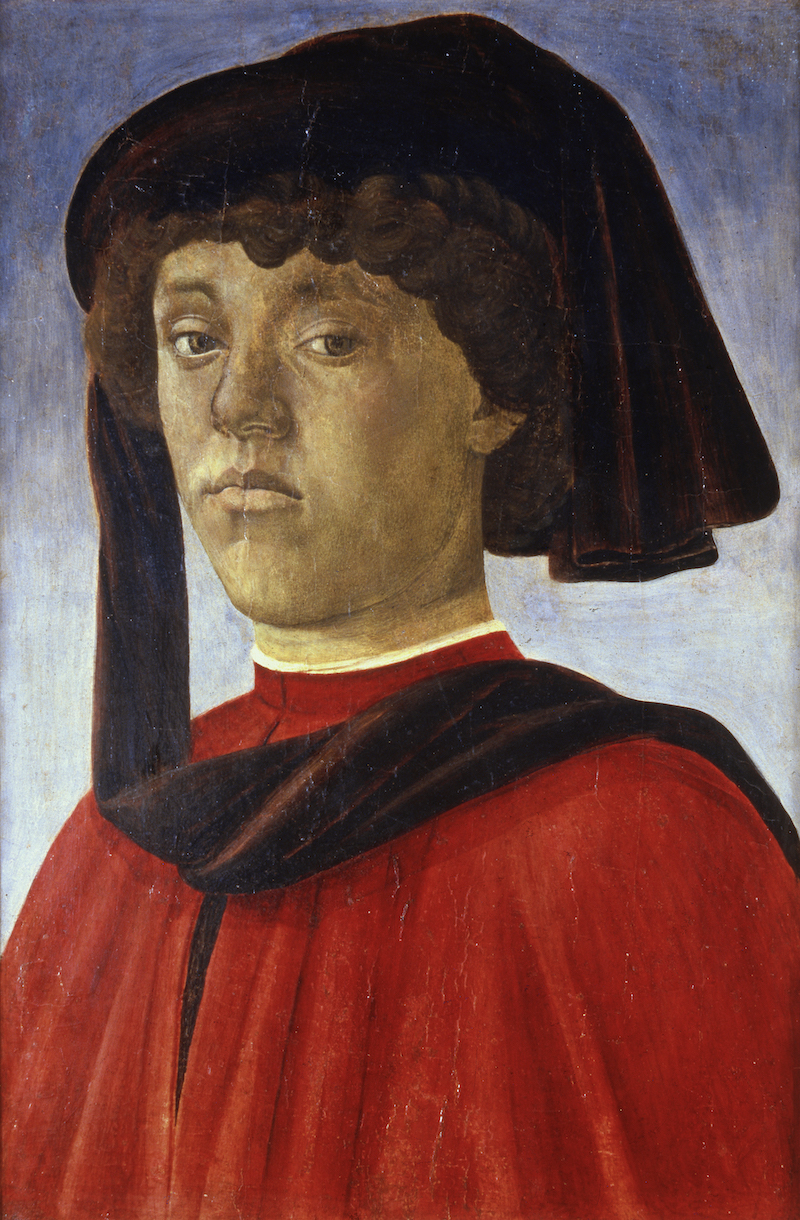 Botticelli was a teenager when he went to work for Fra Filippo Lippi, a leading Florentine painter and a favorite of the Medicis. By his early 20s, Botticelli had his own workshop and was painting the pagan along with the Biblical—the gods of Greek and Roman antiquity. Portraits, too. And in almost everything he made, even the most conventional religious subjects like the Nativity or Madonna and Child, he managed to evoke virtues and emotions long subsumed in Western art by the narrow demands of religious and political propaganda. Tenderness and awe, beauty and terror. People were people in his art, even when they were gods.

“Botticelli, with this very fresh new language that he developed, fused various cultures without appropriating any of them,” Schmidt says, “melding ancient Greek and Roman humanism with the Christianity of the time in a mutually enlightening way. There’s an optimism that comes out of this—the rediscovery of the value of learning and humanist ideals—that leads directly to the Enlightenment.”

For the first time, Schmidt says, an artist is “rendering philosophical ideals,” offering a glimpse of humanity as, well, humane. “There is no Thomas Jefferson without Botticelli,” he says. “No one could have catalogued the rights of man without the Renaissance.”

The Dark Ages, we now know, were perhaps not as dark as we thought. Rome fell, and science slowed in the West. People forgot how to make concrete. But the Islamic world thrived, and so did agriculture. If you could afford to eat, you ate well.

Still. To the Renaissance way of thinking, the medieval era had indeed darkened the march of progress. Socially, politically, artistically—almost everything seemed worse than it did 800 years earlier. The domination of the Church, and its subsequent corruption in the plague years (just as people were seeking real spiritual nourishment), were seen as especially stifling, on earth if not in heaven.

The Renaissance could fix that. There was a tunnel back to better days, and ahead to a better future, with a light at both ends. As the Florentine philosopher Matteo Palmieri put it at the time, “It is but in our own day that men dare boast that they see the dawn of better things.” 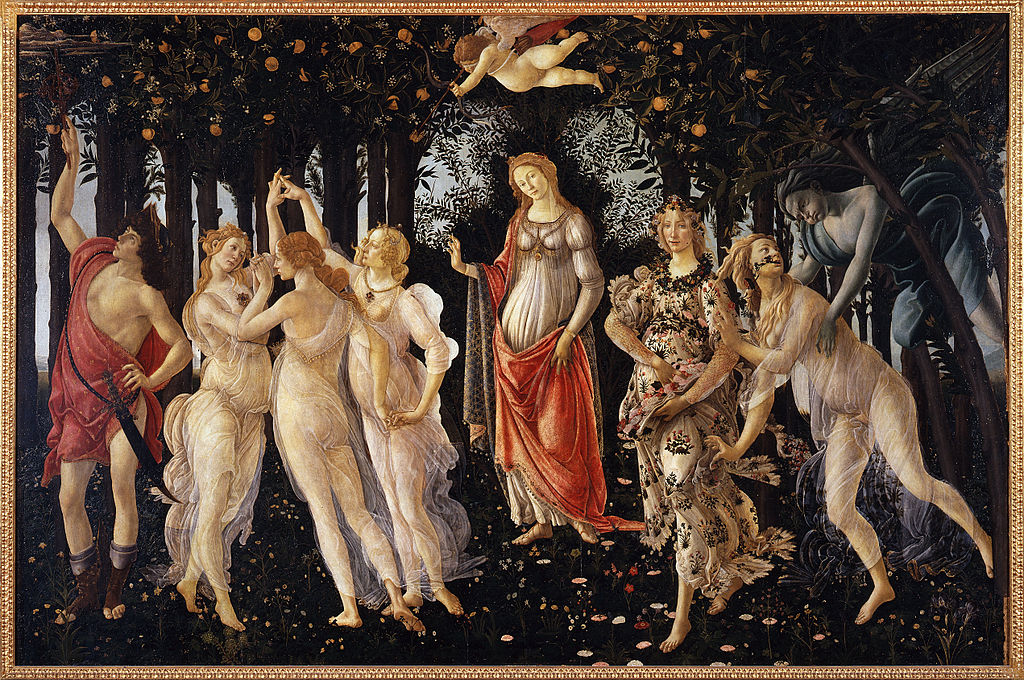 Botticelli believed this. At least, his art suggests he did. Primavera, one of his best-known paintings, is about rebirth. The pleasures of springtime—love, flowers, dance—embodied by the ancient gods. Or maybe it’s about nothing. There’s no story, no moral, no spiritual appeal. It might just be nice to look at. The beauty is the point.

Pallas and the Centaur, one of the Uffizi stars of the exhibition at Mia, appears to feature Pallas Athena, or Minerva, the goddess of knowledge. The centaur likely represents our coarser nature, our animal instincts, tamed by the better judgement of Minerva—arrested, even, as she wields a nasty-looking halberd, the favored weapon of palace guards. Notably, her dress is decorated with the three-ring insignia of the Medici family, for whom the work was commissioned. A not-so-subtle allusion to the family’s role in elevating learning and the arts.

Botticelli was a tanner’s son. He had no advanced schooling, never studied Latin or ancient Greek. But he still did well in the heady philosophical milieu of the Renaissance. He was excited by what was going on, what was driving his patrons to dig ever further into the classical archives for inspiration. Rachel McGarry, Mia’s Elizabeth MacMillan Chair of European Art and Curator of European Paintings and Works on Paper, who co-organized the Botticelli show, notes in the exhibition catalogue that “Botticelli imbibed Florence’s vibrant intellectual currents and interest in antiquity organically,” while also benefiting from his benefactors’ knowledge. It was enough.

Botticelli did well enough, in fact, to purchase a country house with his siblings in the 1490s. But by then, Florence was changing. Lorenzo de’ Medici, the de facto Florentine ruler also known as Lorenzo the Magnificent, was dead. His son, who came to be known as Peter the Vain or Peter the Unfortunate, fared poorly. The Medici cash was dwindling. The Medici swagger was waning. When the French invaded, in 1494, Peter surrendered.

Into the power vacuum came a religious firebrand, the Dominican friar Girolamo Savonarola, who saw the virtues of the Renaissance as vanities. Indeed, in 1497, he and his followers organized a notorious “bonfire of the vanities” on the main square of Florence, burning books and art, musical scores and elegant clothes—including, perhaps, paintings by Botticelli. Indeed, he may have contributed them himself. 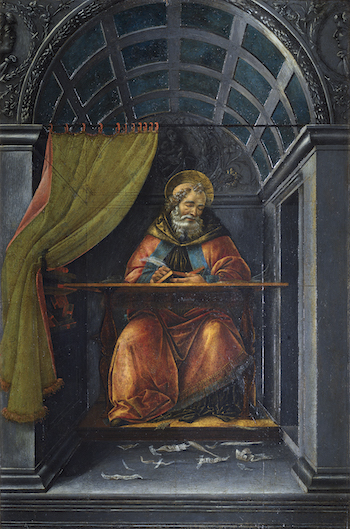 Botticelli’s brother Simone, who lived with him in the country, came under the friar’s influence and eventually so did he. His paintings, especially the religious ones, turned austere, McGarry says. His Madonnas smiled less, bowed more. His goddesses kept their clothes on. Even after Savonarola incited a backlash, and was excommunicated and burned at the stake in the same plaza where he had once burned “vanities,” Botticelli’s work remained contemplative, as though he had not just joined a bandwagon but was genuinely moved.

His reputation began to fade, even in his own lifetime, and perhaps his Savonarola association had something to do with it. But there is something modern even in this, his willingness to eschew his comfort for some greater fulfillment. He had gone his own way, not knowing–or caring—if anyone would follow. By all accounts, he died a pauper. And for hundreds of years afterward, his work was largely ignored. It was only in the late 19th century, when the pre-Raphaelite painters rediscovered the virtues of Renaissance art, that his reputation began to be restored.

In one of his last great paintings, a small devotional picture of Saint Augustine that is in the exhibition at Mia, Botticelli shows the prodigious theologian in his study. Writing and rewriting in his great project of adapting classical thought to Christian concepts. The floor beneath his desk is littered with spent feather pens and crumpled pages. As if to suggest that everything is subject to revision. Nothing is sacred, even the sacred. The mind is constantly working. The key is to keep it open.