The Vietnam War defined a generation of Americans in the 1960s and ’70s, from campus protests to disillusionment to, of course, death. More than 58,000 Americans died in the conflict.

But for Southeast Asians, in Vietnam, Cambodia, and Laos, the war was always different. It was longer, for one thing, having begun in Vietnam in 1954, and it was deadlier. In less than two decades, nearly 10 percent of the population in Vietnam alone was killed or wounded, and 1.5 million people fled. Their home was the battlefield, and when the war was over, in 1975, it wasn’t really over. More than a painful memory, it’s an event that radically altered the personal and cultural history of millions. They call it the American War.

At the Minneapolis Institute of Art, the exhibition “Artists Respond: American Art and the Vietnam War,” organized by the Smithsonian American Art Museum, shows artistic responses to the conflict—mostly from artists in the United States. Personal, political, and speaking to a cultural moment that was impossible to escape, the artists captured a country trying to come to terms with the chaos.

But a second show, appended to this, called “Artists Reflect: Contemporary Views on the American War,” offers a Southeast Asian perspective on the conflict and its aftermath. Stories of family, migration, and identity that continue to unfold.

Some of these stories, like Pao Her’s Hmong Veteransseries, open windows onto aspects of the war that are little known in the United States—and sometimes scarcely acknowledged. Her is a Hmong American photographer in the Twin Cities—her parents fled Laos in the early 1980s. Her photographs depict Hmong Veterans of the “Secret War,” recruited by the CIA for the stated purpose of fighting communist forces in Vietnam.

These veterans were never recognized by the U.S. government and receive no associated benefits. Yet in Her’s photographs, they wear medals — one man even has a Purple Heart. She says she wants to draw people in by prompting questions: “Why does he have a Purple Heart when there’s never been a Purple Heart given to a Hmong man?” She says she’s glad to have her work in an institution with such a “large white footprint.” She wants it to challenge assumptions. 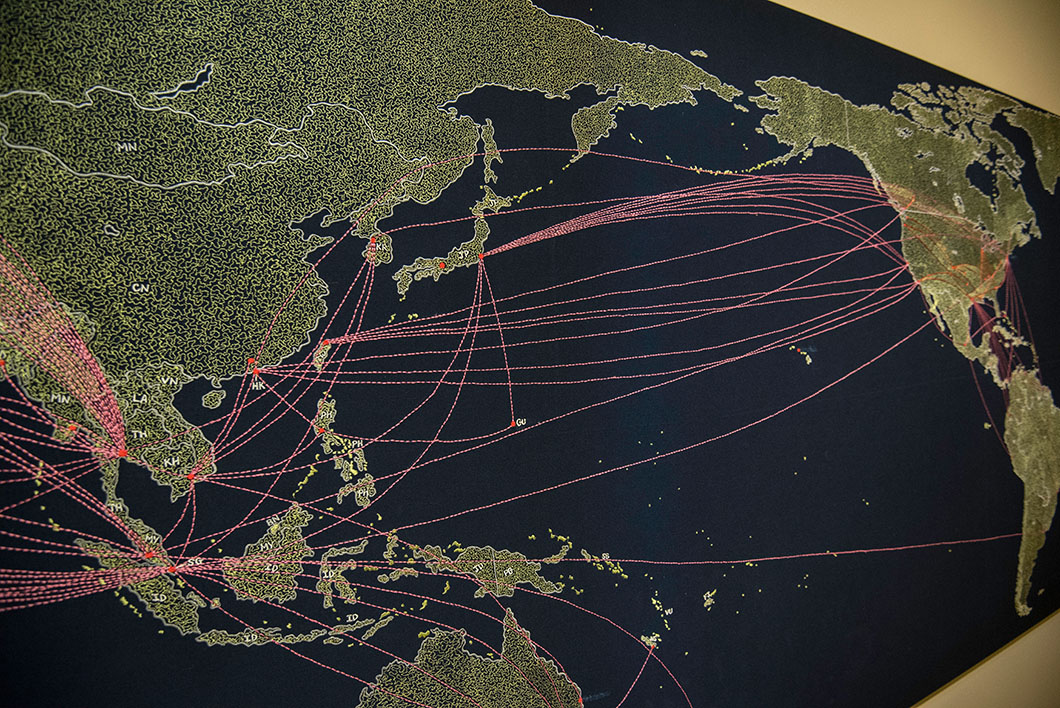 Indeed, it becomes quickly apparent that challenging dominant narratives is an important part of the show. While the work is highly personal, it’s also political — art can change the narrative and narratives can change the power dynamic. Another artist in the show, Vietnamese-born Tiffany Chung, centers her practice around map making. “Maps were introduced by colonial powers to reimagine the places that were being colonized,” says Chung. “I want to think about how we can use maps to subvert that.” Her map places Asia in the center of the frame. (It’s a sentiment echoed in another, unrelated exhibition at Mia: “Mapping Black Identities”).

Chung’s piece, called Reconstructing an exodus history: flight routes from camps and ODP cases, traces dozens of refugee routes from Southeast Asia. It’s painstakingly embroidered to beautiful effect. Chung and Her both talk of using beauty to draw people in, that underneath the beauty is a lot of trauma. “It’s one thing to talk about it but it’s another when your family was directly affected by it,” Chung says.

The desire for representation—wanting to tell their own story, of their own community—is an important notion to each of these artists. Her says she’s frequently asked whether she would do a story about something other than Hmong people. “The answer is no,” she says. “This is my story.”

For Thi Bui, another artist in the show, representation of the Vietnam War experience starts with moving away from the name itself, which she says fails to recognize the dozens of Southeast Asian ethnic minorities that were impacted. (Bui herself was born in Vietnam, three months before the war ended in 1975.) 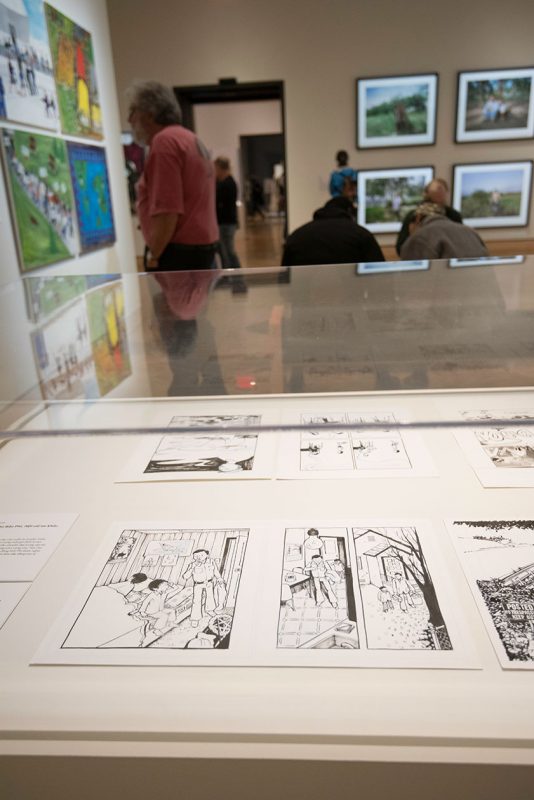 Art from Thi Bui’s graphic novel “The Best We Could Do,” in the exhibition “Artists Reflect: Contemporary Views of the American War.”

Bui had begun her creative career as a sculptor but “got in trouble a lot for making work that was too narrative,” she says. At the same time, in trying to capture the war’s effects, “I kept coming up against a wall where the image was too contaminated,” she says, turned into stereotypes by pop-culture representations of the war (Apocalypse Now, Full Metal Jacket, etc.). She pivoted instead to graphic novels, a way to combine visual representations with narrative ones. Her memoir The Best We Could Do, which is excerpted in the show at Mia, came out in 2017. It’s an intimate portrait of her family’s daring escape from Vietnam at the close of the war, and the difficult adjustment to the United States afterwards.

Stories like Bui’s are broadening Americans’ perspective of the war and its impact. “The representation is finally catching up with what has been the reality,” she says. But the larger story of war and exodus, that so powerfully shaped the artists in Mia’s show, is still playing out all over the world. “We’re not talking about ideology here, we’re talking about power,” says Chung. “There’s so much work we have to continue to do beyond our own communities.”