Of all the images in “Artists Respond: American Art and the Vietnam War, 1965–1975,” a gritty show of anti-war art organized by the Smithsonian American Art Museum and now at the Minneapolis Institute of Art, some of the most appealing are by a woman named Corita Kent.

One of her prints features a yellow submarine, sprouting flowers and emblazoned with the peace symbol, alongside the slogan “Make Love, Not War.” Another employs large graphic arrows, like traffic signs, in the colors red, green, and yellow. “Wrong way,” it says, along with tender lines from poet Rainier Maria Rilke. “Perhaps everything terrible,” one reads, “is in its deepest being something that wants help from us.”

Kent made both of these screenprints in 1967, when the so-called Summer of Love marked the high point of a counterculture celebrating peace, love, and rock ’n’ roll. But Kent was no hippie—she was a nun. 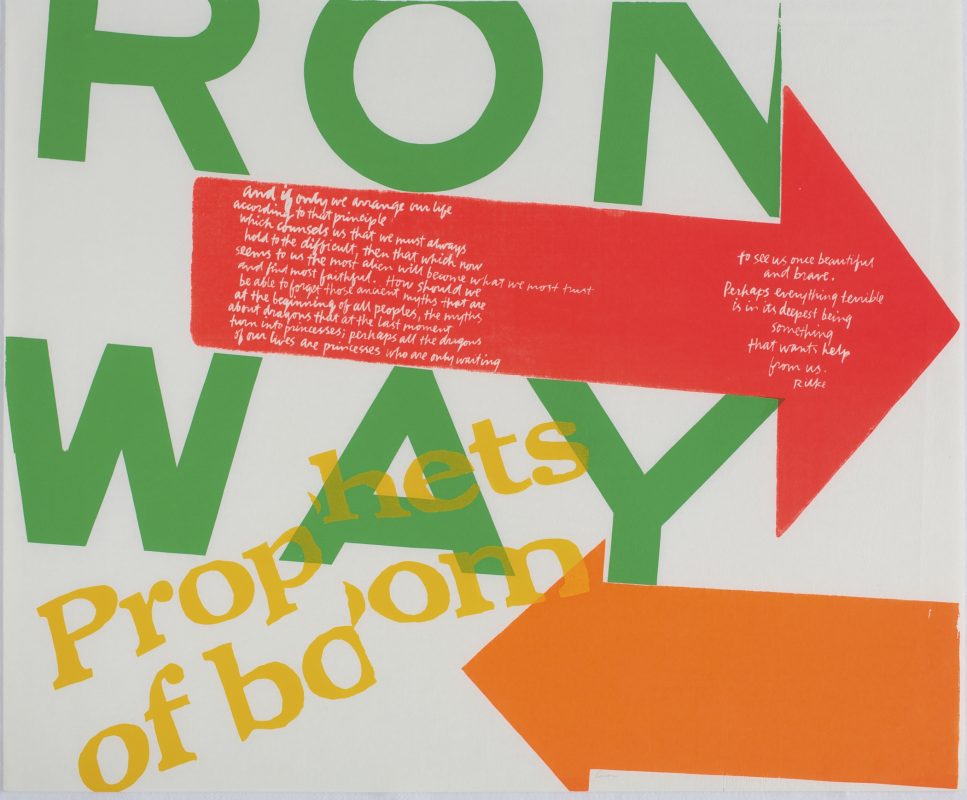 Frances Elizabeth Kent was born in Iowa, in 1918, and moved to Los Angeles when she was 18 to join the Roman Catholic order of the Immaculate Heart of Mary. She took her vows, donned a black habit, and changed her name, as nuns generally do, becoming Sister Mary Corita. Years later, when she became famous, she would be known around the world as simply Sister Corita.

Sister Corita began studying art almost immediately, eventually earning her Master’s in Art History from the University of Southern California in 1951. The order had a college where she taught art, taking advantage of the school’s promixity to L.A.’s creative community to bring in celebrities like Alfred Hitchcock and the futurist Buckminster Fuller, and she befriended the avant-garde composer John Cage and designers Charles and Ray Eames. Open-minded Catholics from around the country flocked to the school, and Sister Corita’s classes in particular, to experience a starkly modern way of seeing the world.

In 1962, Sister Corita went to see an Andy Warhol show in L.A., including his soup can prints. She was primed for the Pop Art revolution, which made commentary out of popular culture. The Second Vatican Council had begun to meet that year, issuing changes that would open the Church to the wider world—changes Sister Corita welcomed like a breath of fresh air. She had something to say, and now she felt empowered to say it.

Her art began to change. She had been focused rather benignly on personal and spiritual subjects. But soon she was incorporating media and advertising, in the Pop Art vein, and commenting on political and social issues — much to the Vatican’s chagrin.

In 1965, when the Watts Rebellion broke out in L.A., Sister Corita made a print called my people, which juxtaposed the front page of the Los Angeles Times(headline: “Eight Men Slain, Guard Moves in”) with the words of an activist priest in Selma, Alabama, where civil-rights protests had also turned bloody. “Rather than squelch the rebellion,” the priest had written, “we might better enlist the rebels to join the greatest rebel of his time — Christ himself.” 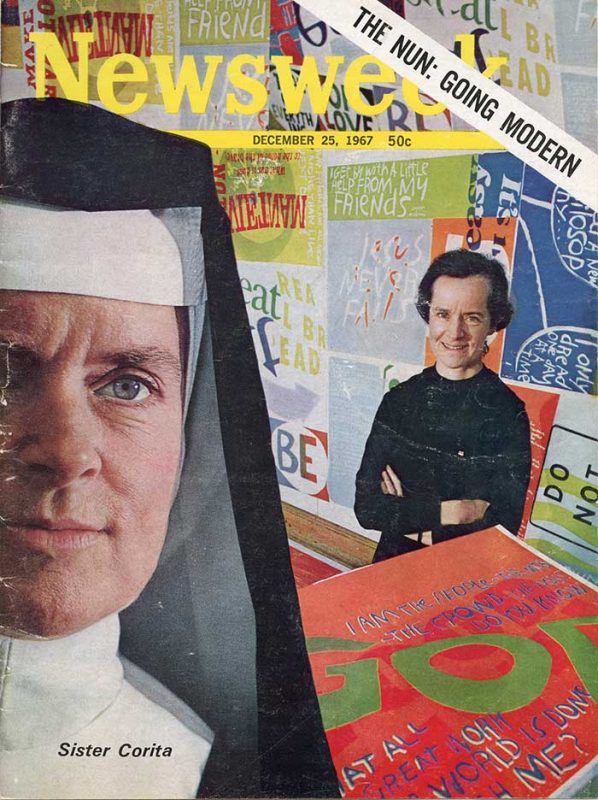 Two years later, Sister Corita made a print called simply stop the bombing, showing bomb-like projectiles against the colors of the U.S. flag and the words “I am in Vietnam. Who will console me?” — a verse written by a fellow Catholic activist and instructor at Immaculate Heart College. Her work was quickly being picked up for dozens of shows in galleries and universities across the country. In late 1967, Sister Corita appeared on the cover of Newsweek, with the headline “The Nun: Going Modern.” The Los Angeles Times named her a Woman of the Year, along with Ella Fitzgerald and Billie Jean King.

By then, the Catholic hierarchy, especially the archbishop of L.A., had grown weary of Sister Corita. Earlier in 1967, when thousands of U.S. religious leaders gathered in Washington, D.C., to protest the Vietnam War, not one of the 250 Catholic bishops attended. The L.A. archbishop was decidedly against civil rights and anti-war agitation, and already in 1966 he had written to the head of Sister Corita’s order demanding she abandon her art career.

“May I say further that we hereby request again that the activities of Sister Carita [sic] in religious art be confined to her classroom work and under your responsibility,” the archbishop wrote.

The college, however, was not easily pacified. The school’s dean and indeed the head of the order were prepared to fight the church’s restrictions. The college had been broadening its approach to teaching and student life, in the wake of Vatican II. It had even been participating in therapy experiments conducted by the New Age humanists at the Esalen Institute up the coast.

Sister Corita was good friends with the activist Jesuit priest Daniel Berrigan and his brother Philip. And when, in 1968, the brothers were arrested along with seven others for breaking into a draft board office and burning records with napalm, Sister Corita decided to take a sabbatical. She spent the summer on Cape Cod and made art in Boston. She came out with a searing print, in Warholian colors, called news of the week, which combined a Lifemagazine cover of American soldiers carrying a wounded comrade with a well-known diagram of a slave ship, showing the arrangement of bodies packed in the hold. The words of Walt Whitman, along the side, include the line “I am the hounded slave.”

She then left the order altogether. In 1970, the entire order — along with its college — broke with the Church, becoming a lay community. Corita Kent continued to make art from her studio in Boston, including a U.S. Postal Service stamp, in 1985, featuring rainbow stripes and the word “Love.” It’s among the most popular stamps ever issued. 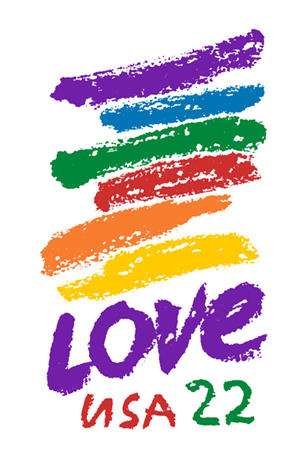 She died the following year, leaving much of her estate to what was left of the Immaculate Heart community. Her work had been collected by the Metropolitan Museum of Art and the Museum of Modern Art and the Los Angeles County Museum of Art, and reproduced on billboards and T-shirts. Her signature rainbow stripes had been painted on a massive gas tank in her new home of Boston in 1971, presaging the stamp, and remain there today—newly painted on a new tank. Yet even after leaving Immaculate Heart College, which finally closed in 1980, she never stopped believing in the power of education and the seriousness of the task.

When her “Love” stamp was released, in a ceremony on the set on the silly TV show Love Boat, she had boycotted the event. “The TV definition of love is nothing very deep,” she had said, “and everything gets resolved in an hour. I think it’s dangerous to educate people that way — that love happens that fast, that troubles are resolved that easily.”