Celebrate Third Thursday’s Bike Night with this tour of highlights of Twin Cities locations from our collection.

How to use this map:

Click on the map above or here in your personal device to open Google Maps. These self-guided stops put you in the actual locations that inspired artworks at Mia. Each stop is named after the artwork’s title. For your convenience, we’ve created small geographic loops for you to explore.

Go at your own pace and try to visit as many stops as you can.

Bike, drive, roll, skateboard, or walk! Be sure to bring your face masks and keep social distance.

Share your route with us on social media!
@artsmia #BikeNightMia

On the third Thursday of every month, join us to experience Mia’s diverse art collection through unique programs, drinks, and live music. 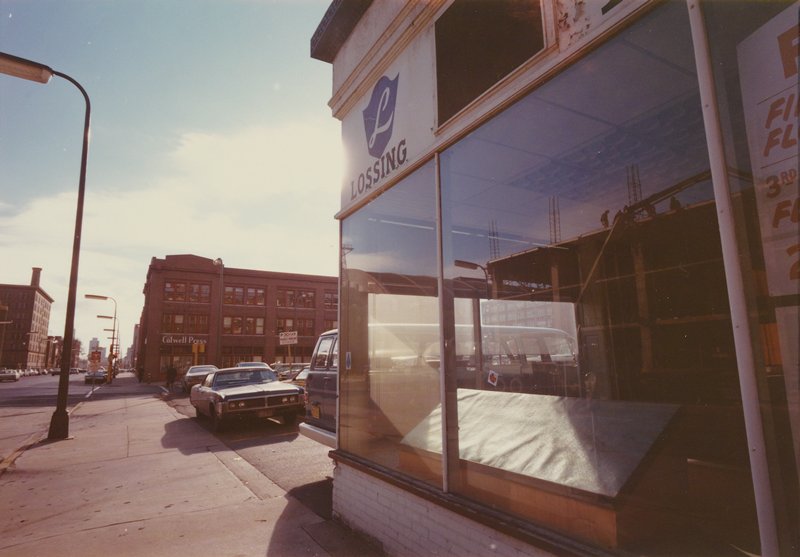 This location approximates where this photograph was taken in 1973. Thanks to some clues from the title and within the photograph, we discovered that Colwell Press, Printing and Lithographing Plant, used to be located at 501 South 6th St., where you are now. 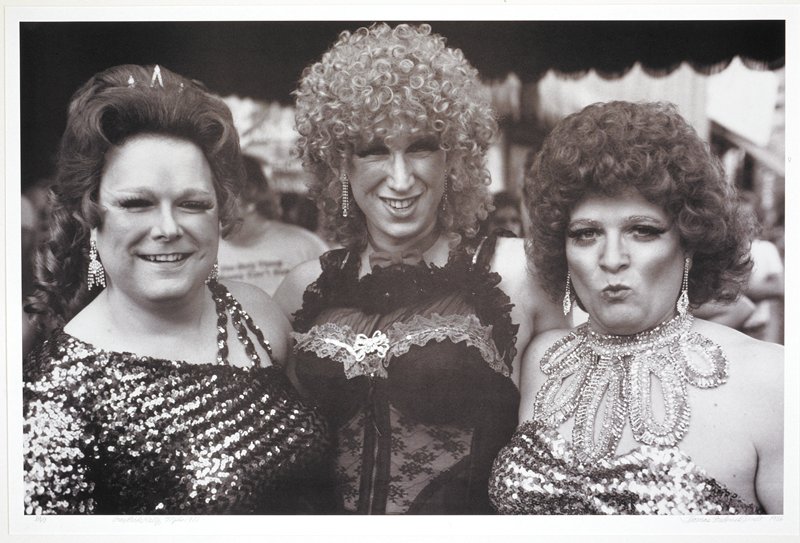 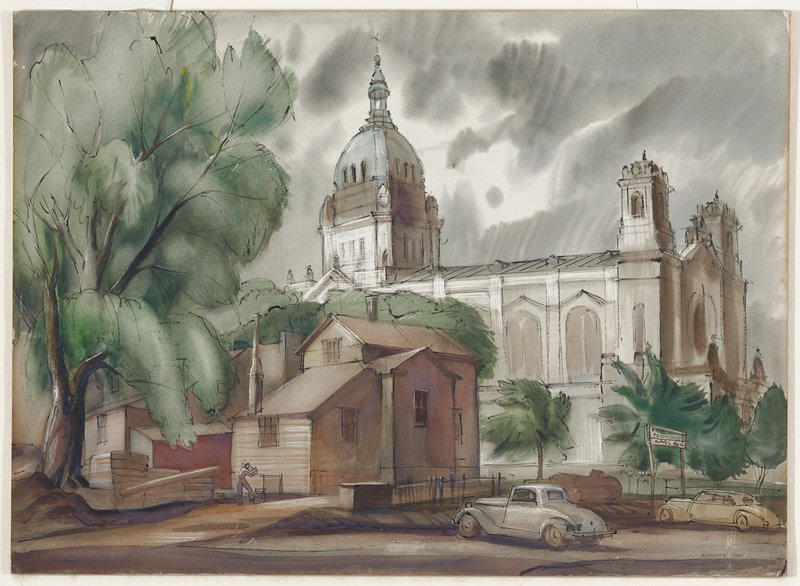 Now known as the Basilica of Saint Mary, the church was informally referred to as the Pro-Cathedral from its beginning. It was established as a minor basilica by Pope Pius XI in 1926, making it the first basilica in the United States. 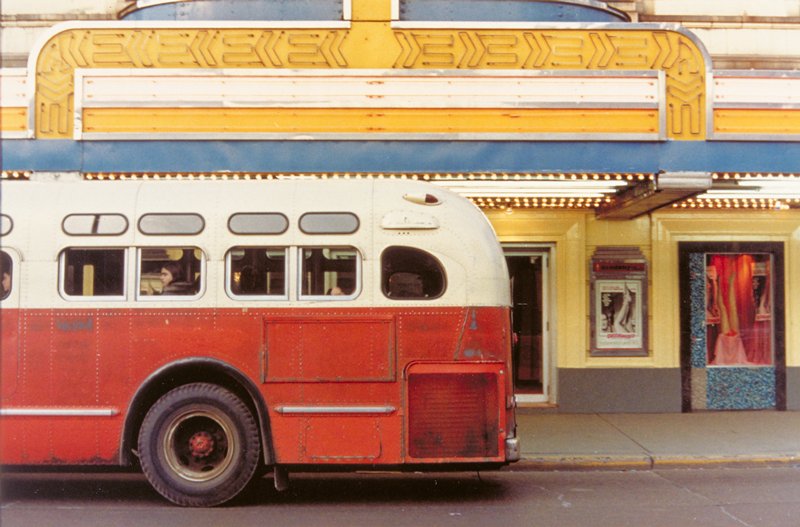 This Minneapolis bus zooms by the former Academy Theatre, which opened inside the old and remodeled Sam S. Shubert Theatre, originally opened in 1910. It was renamed the Alvin Theatre in the 1930s and presented films, live theater, and finally, strip shows.

It closed in 1983 and remained vacant until 1999 when the whole theater, minus the stage house, was literally moved a block and half away to make room for a major entertainment complex—making it the largest building at the time ever moved.

The Academy Theatre awaited a restoration as a venue for dance and music presentations. The group heading its resurrection, Artspace raised money to restore it. It reopened on September 9, 2011, as the Cowles Center for Dance and the Performing Arts. 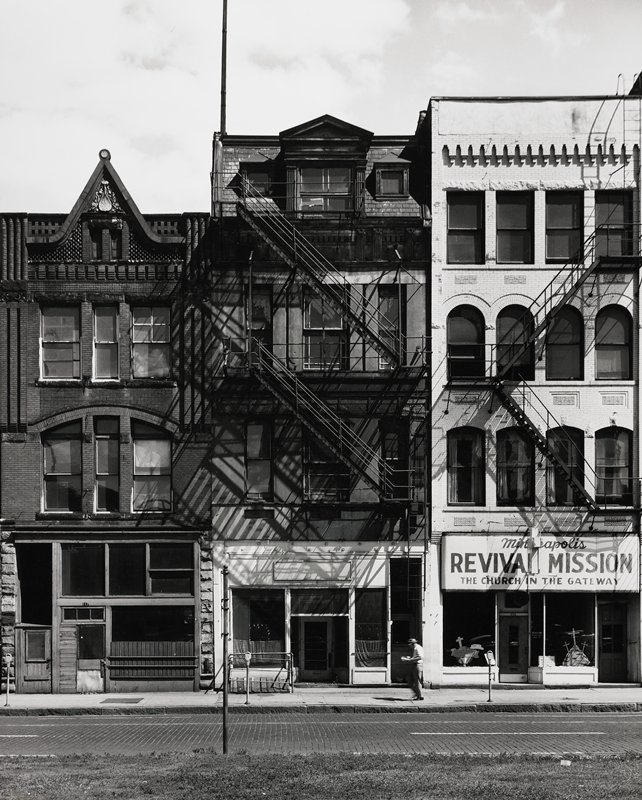 The Minneapolis Revival Mission in the Gateway District (the convergence of Hennepin, Nicollet, and Washington avenues in Downtown Minneapolis) was founded by Marie Sandvik in 1940. The Norwegian immigrant was called to start the mission in a former bar, where she catered to residents of nearby flophouses. Her pitch? “I have come to offer you a new life.” It operated until 1960. 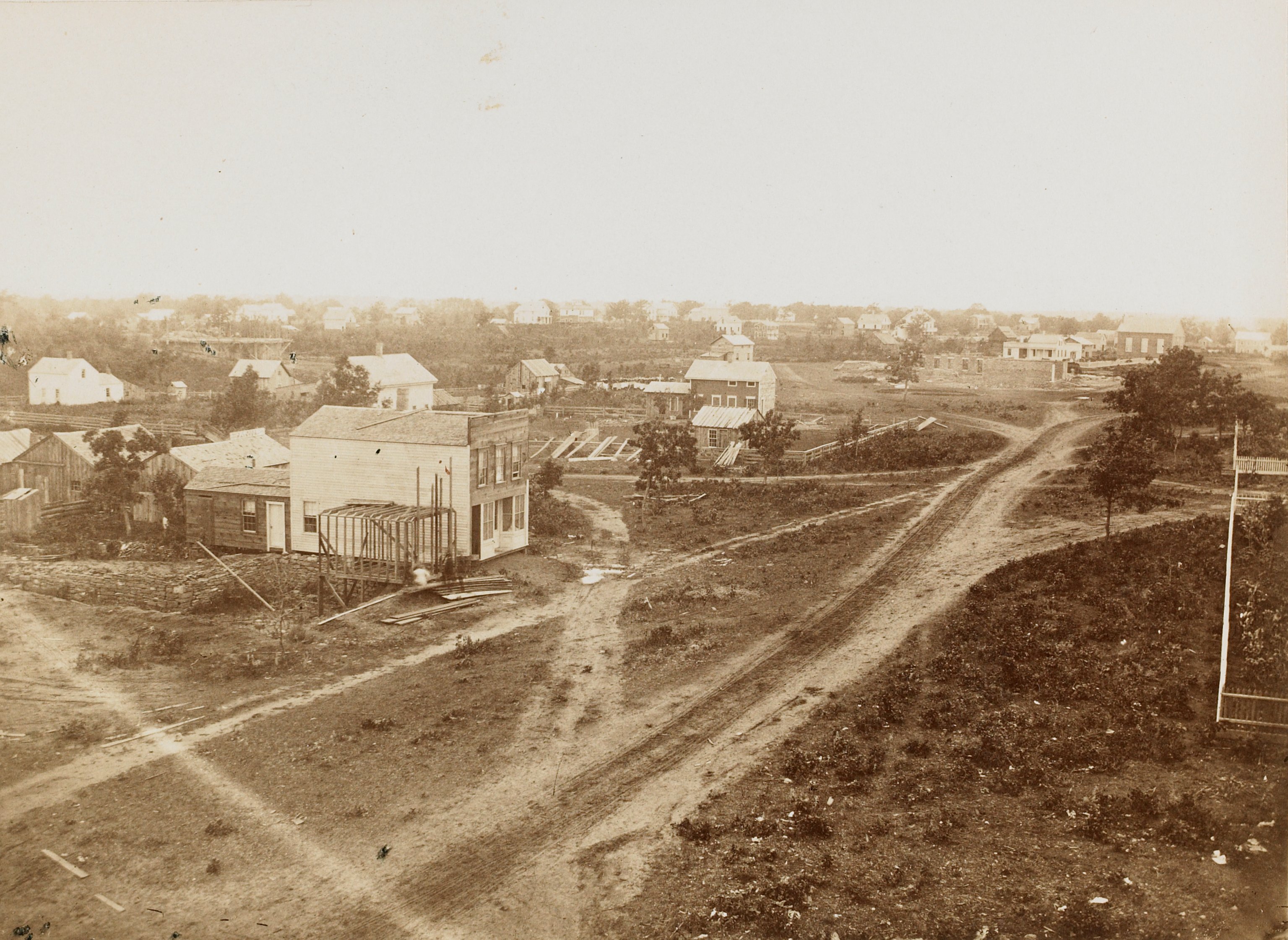 Before Whole Foods and land of 10,000 lofts, this area was the gateway to Minneapolis. Can you recognize Washington Avenue or Second Avenue? 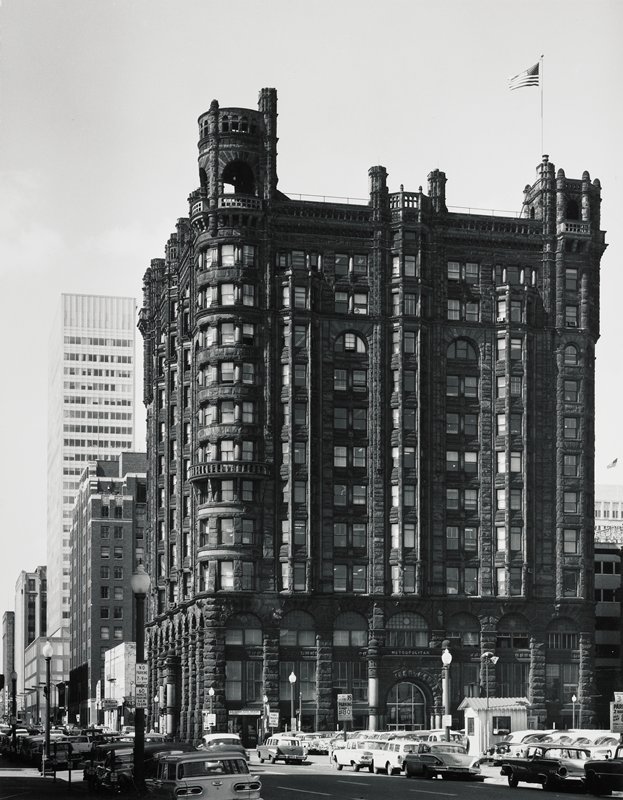 The Metropolitan Building, originally known as the Northwestern Guaranty Loan Building, was one of the most architecturally significant structures in the city’s history. It stood from 1890 until it was torn down as part of urban renewal efforts that saw about 40 percent of the downtown district razed and replaced with new structures. 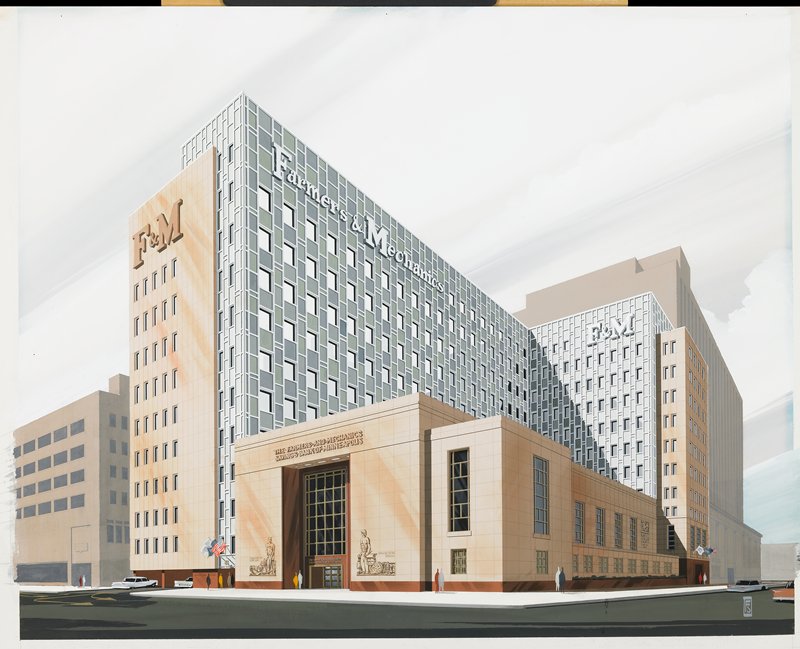 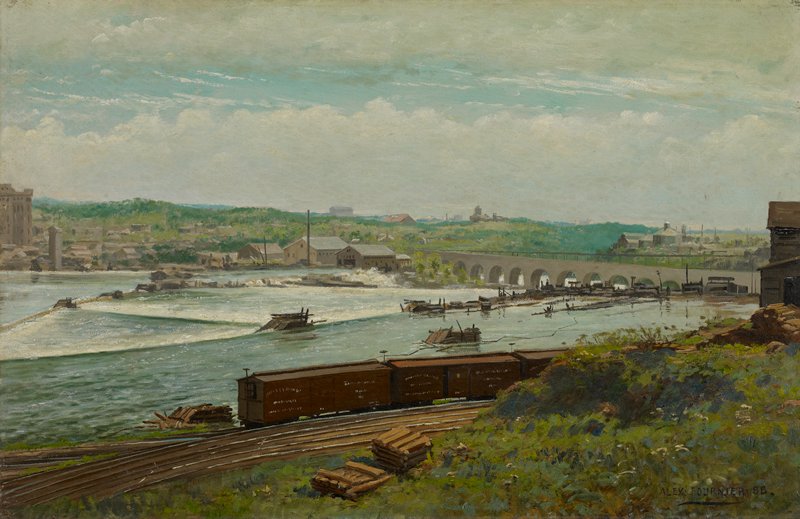 This view of the mill pond in Minneapolis was painted from the west side of the Mississippi River, looking toward the University of Minnesota. It shows the Stone Arch Bridge, commissioned by railroad magnate James J. Hill and completed in 1883. 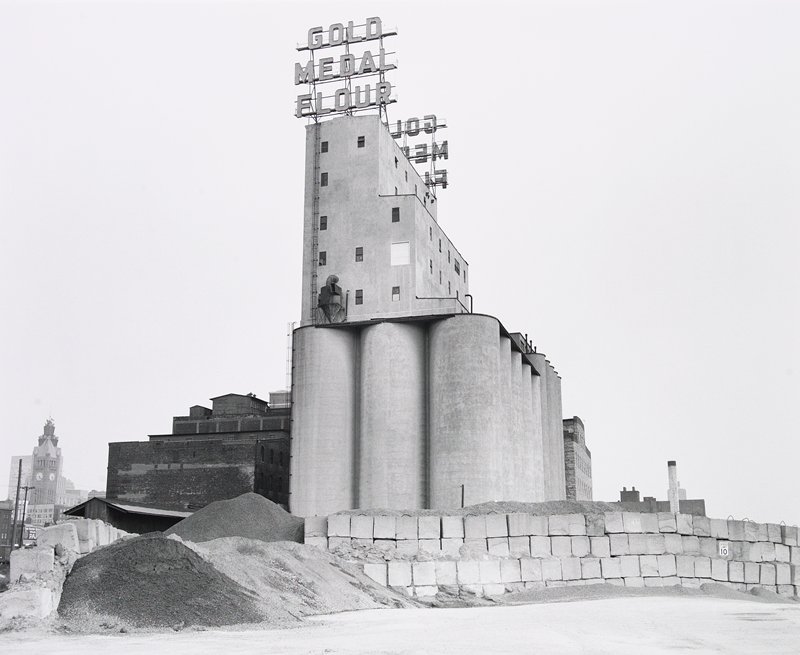 The Washburn Crosby Elevator No. 1 is known for the “Gold Medal Flour” sign attached to the roof. Now a part of the Mill City Museum, visitors can learn about how the mill is a 1878 reconstruction after a fire that same year. In 1991, another fire consumed the building next to what we see today as the Mill City Museum. 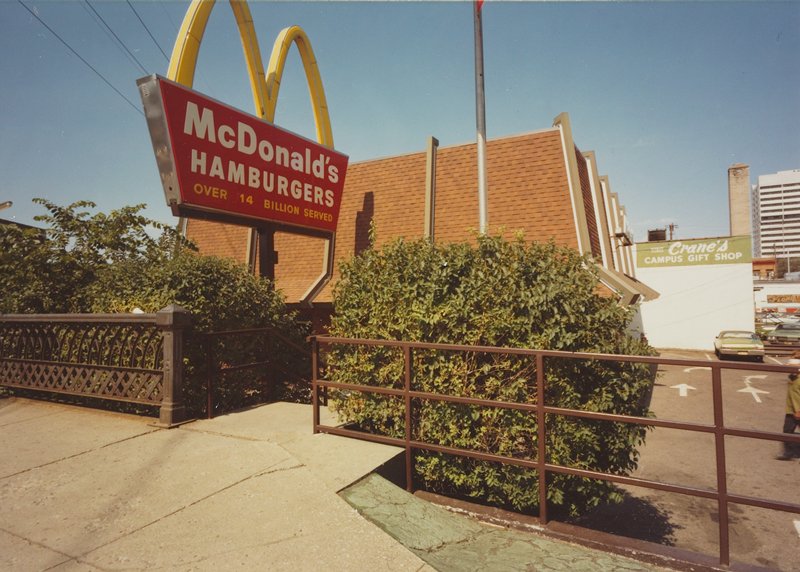 Dinkytown McDonald's Behind It's Hedges

Many a University of Minnesota student has frequented this Dinkytown staple. Oh, the stories those hedges could tell. 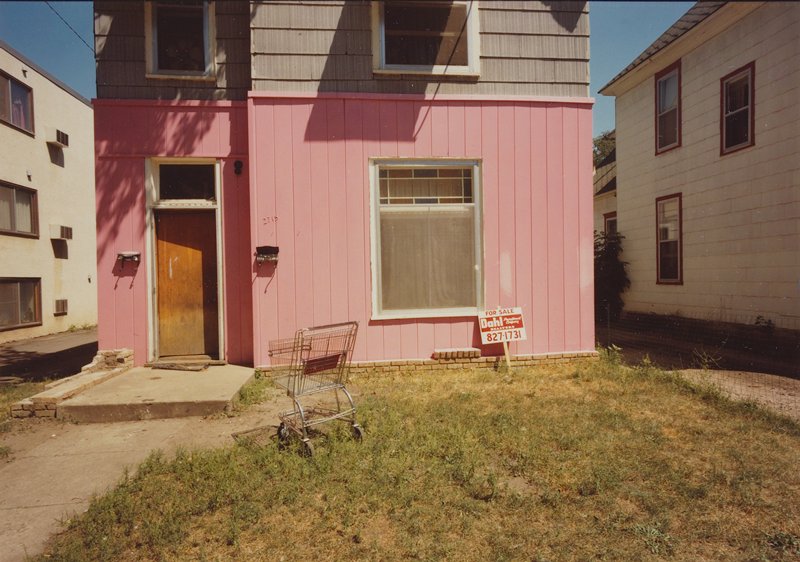 This house is an example of a typical South Minneapolis home. Check that 1970s flamingo pink! 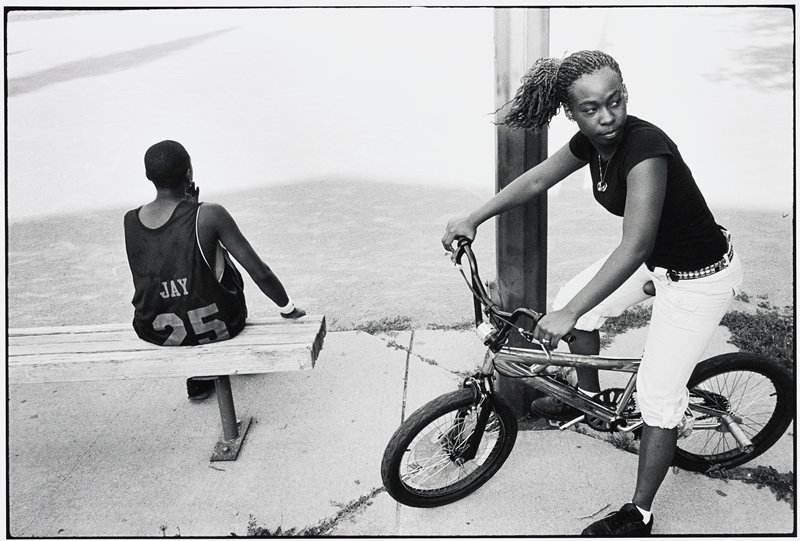 The park is unofficially named for Henry Wadsworth Longfellow, an American poet who wrote The Song of Hiawatha in 1854. The poem made Minnehaha Falls famous worldwide, although Longfellow had never visited the falls. 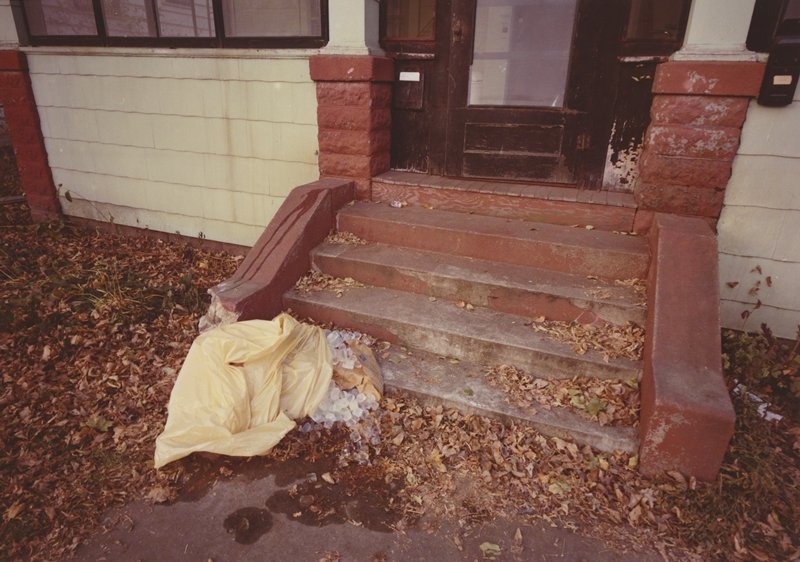 The bag of ice spilled on the front stoop in this photo feels like the beginning of an interesting story. What do you think is happening in this scene? 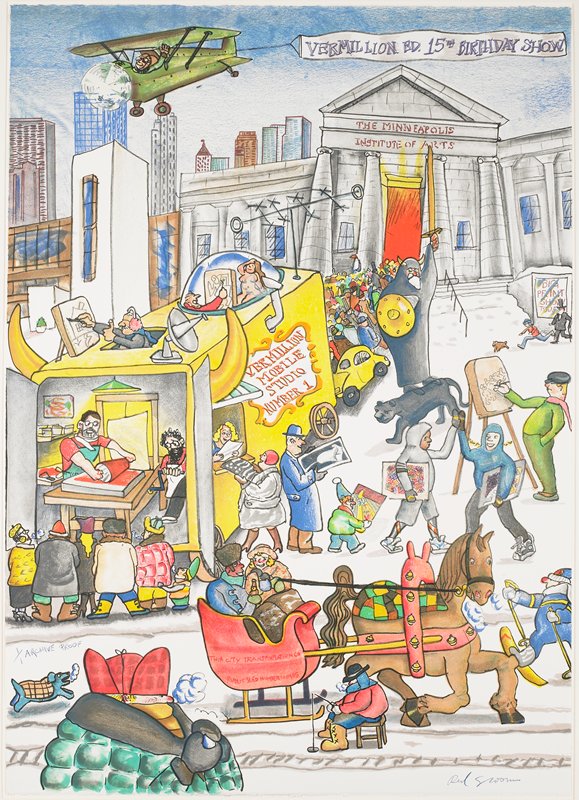 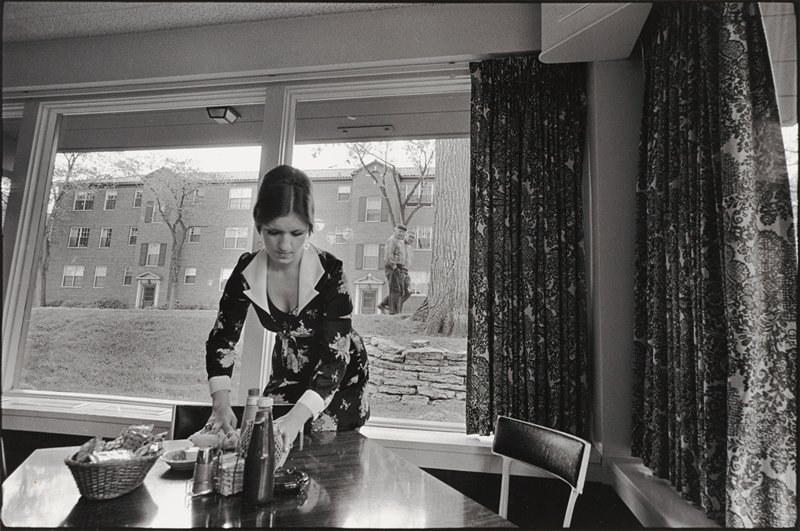 Fair Oaks Motor Hotel and Restaurant opened in 1957. It was the former site of Minneapolis milling tycoon William D. Washburn’s mansion. Located at the intersection of 3rd Ave. S. and East 24th St., the motel was demolished to make way for Mia’s parking lots in the early 1990s.

In its final years, the restaurant served up a delicious curry.

Mississippi River, Minneapolis, 1983
Stuart D. Klipper
Color coupler print
GIFT OF STUART D. KLIPPER IN APPRECIATION OF TED HARTWELL AND TO COMMEMORATE THE PUBLICATION OF HIS BOOK, ‘THE MAKING OF A COLLECTION’ 85.4.13

There are so many spots to check out the Mighty Mississippi. Which are your favorites?

Lake of the Isles, Minneapolis

Lake of the Isles, Minneapolis, 1982
Stuart D. Klipper
Color coupler print
GIFT OF STUART D. KLIPPER IN APPRECIATION OF TED HARTWELL AND TO COMMEMORATE THE PUBLICATION OF HIS BOOK, ‘THE MAKING OF A COLLECTION’ 85.4.9

Lake of the Isles is a part of the Bde Maka Ska chain of lakes. In Dakota, it is called Wita Tomna (“four islands lake”). 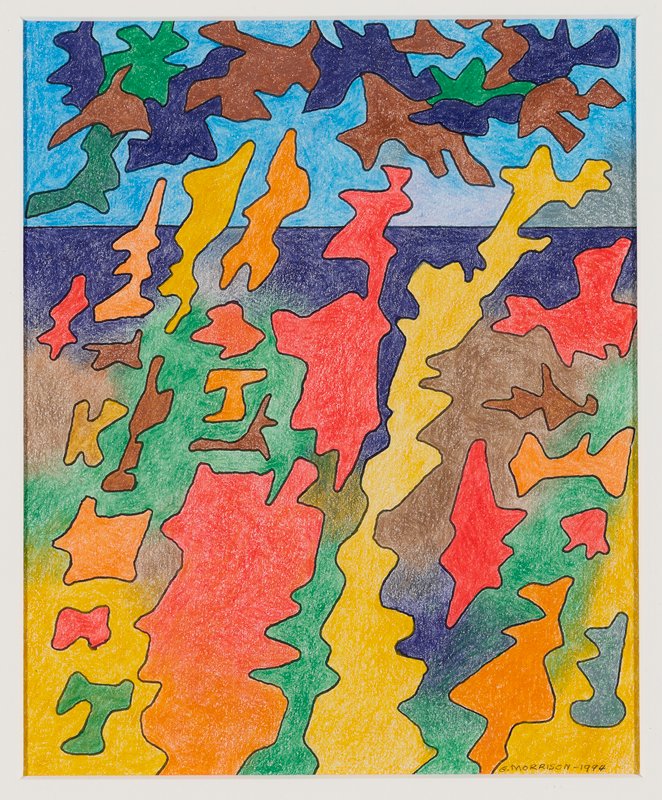 The location on the map is the former home and studio of the artists George Morrison and his wife, Hazel Belvo, which they converted from a church.

Minnesota native George Morrison was a member of the Anishinaabe (Ojibwe) people of the Grand Portage Reservation. Early in his career, he was active in the New York School of Abstract Expressionism, a mid-20th-century movement of avant-garde artists who saw abstraction as the essential vehicle for conveying intense emotion and exploring spirituality and the unconscious through color, form, space, and gesture. Morrison later turned to nature and the earth for inspiration and subject matter, producing paintings, wood collages, drawings, rubbings, and prints that embodied the spiritual concerns of his Native American culture. Many of his later works feature highly abstracted landscapes with high horizon lines and a flattened perspectives, a signature motif that embodied Morrison’s spiritual and symbolic methodology. Though his sculptures and collages could be monumental in scale, Morrison often chose to produce modestly-sized works that could be completed quickly. Indeed, a number of these smaller works were part of his extended series of “surrealist landscapes,” dreamlike depictions of land and sky that resulted from automatic drawing techniques he adopted as a way to tap into the mind’s subconscious. 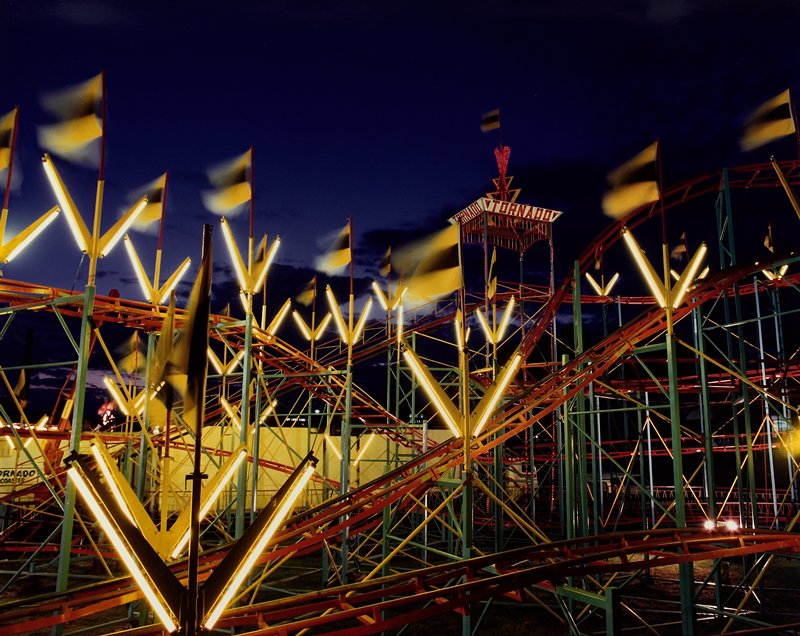 We won’t be able to enjoy the Great Minnesota Get-Together in 2020. Still, we can still celebrate the Mighty Midway! 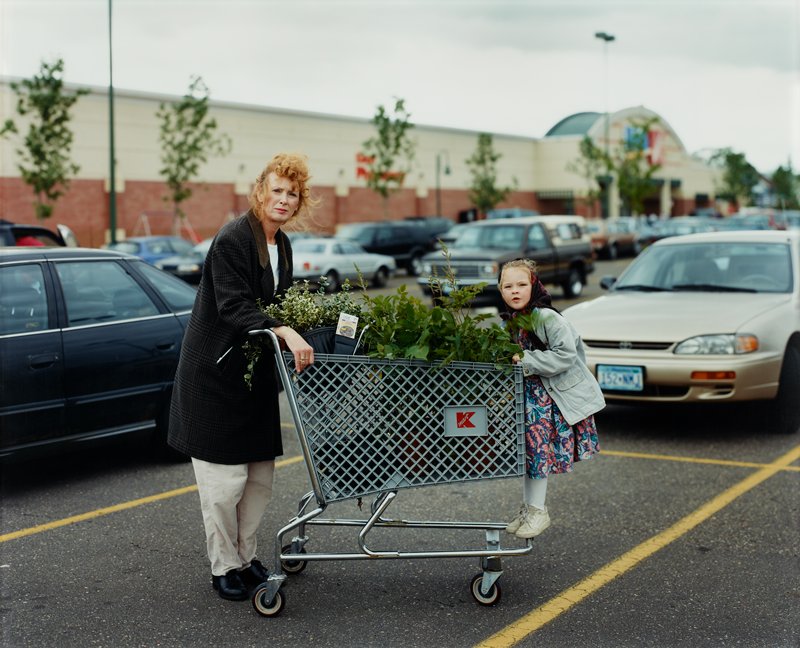 Now closed, this Kmart was the site of Alec Soth’s photograph. What do you see here today? 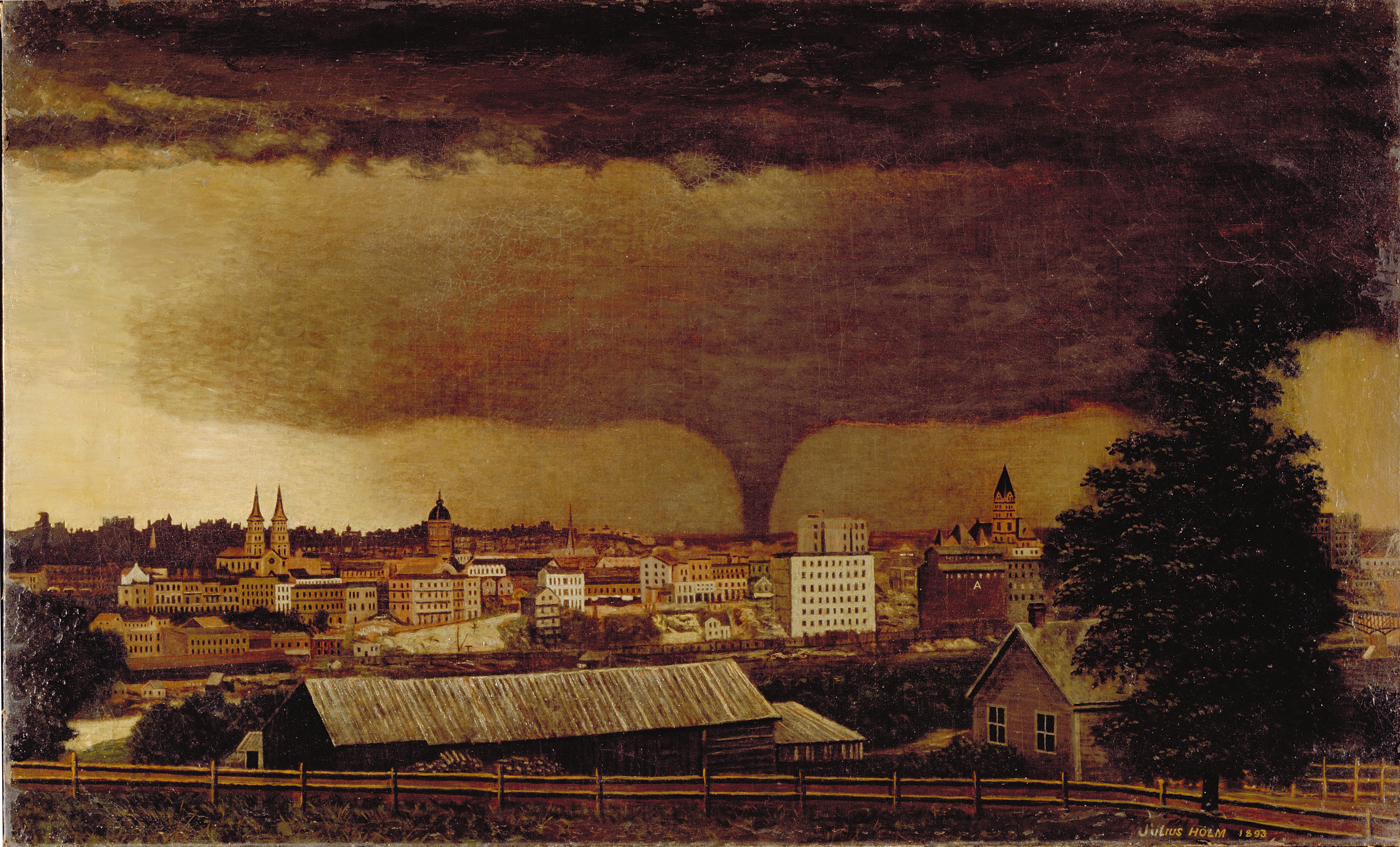 Though not the most devastating tornado to hit the Twin Cities area—6 dead, 11 injured—the Lake Gervais twister of July 13, 1890, became one of the most famous. When it struck, a photographer happened to have his camera set up on a bluff overlooking St. Paul. He captured dramatic images that were published as souvenir cards, which the Norwegian-born Minneapolis house painter Julius Holm used as the basis for this painting, created three years later.

While the location on the map is probably not the exact location depicted in this painting, it’s a good place to take in the gorgeous views from Summit Hill.