Beer before Liquor: Alcohol and Its Pasts Today, alcohol has a presence on every continent of the world, but its regional pasts are varied. This installation gestures to alcohol’s trajectory across the globe and through time, as it earned its reputation as both poison and cure. Beer Before Liquor features works of decorative art and prints drawn from Mia’s permanent collection. The installation coincides with two public programs on premodern alcohol and its uses: a March 3 lecture on the history of rum by Bertie Mandelblatt, and a March 4 tasting event at Tattersall Distilling in Minneapolis. A collaboration of the Minneapolis Institute of Art, the Wangensteen Historical Library at the University of Minnesota, and Tattersall Distilling that explores the history of drinking in the 18th-century Atlantic world.

The Many Voices of Colonial America The Charleston Dining and Drawing Rooms came from the 1772 home of Col. John Stuart, who served as Superintendent of Indian Affairs for Britain’s southern colonies and was also an owner of enslaved Africans. For over 80 years, the rooms have been interpreted as late-1700s interiors featuring high-style Chippendale and Federal-style American and English furniture and objects.

This new temporary exhibition replaces a stylistic approach by reinserting African and Native American presence in these spaces. In the Charleston Drawing Room, Cherokee art of the Colonial era and contemporary Cherokee art that responds to this moment of history reveal stories of diplomatic relations and travel between the Cherokee Nation and the British Crown.

In the Charleston Dining Room, West African and African American objects tell important stories of Charleston’s dependence on enslaved West Africans’ indigenous knowledge of rice cultivation for commercial gain and as a source of nourishment during this time—foreshadowing the legacy of African cuisine in contemporary America. In 1700s England, the home was a place where genteel men and women studied and conversed about natural history; only later did science move exclusively to the laboratory, where it became a predominantly male profession. This temporary exhibition presents Mia’s British rooms as places for the pursuit of science. Women often engaged with scientific discoveries and cultivated observational skills through embroidery and drawing—common pursuits for women of leisure. The c. 1730 Queen Anne Room features works on paper and textiles made by women. The adjoining c. 1740 Georgian Drawing Room is arranged for a “scientific party” where curious men and women socialized amidst telescopes, microscopes, an electrostatic generator—an experimental instrument that generated an electric charge—and, of course, tea. Want to take a tour of the museum’s most paranormal locations? In the museum or not, you can hear stories from Mia’s security guards and staff and even visitors here.

Made in China: The MacFarlane Room Wallpaper / Gallery 328 The MacFarlane Memorial Room is usually furnished with Federal style American furniture given by the MacFarlane family, to represent a wealthy New England parlor. Mia created the room around 1980 to display hand painted Chinese export wallpapers, from around 1800, given by Mrs. Mabel MacFarlane in 1967. In 1982, Mia copied the Federal-style woodwork and mantelpiece from the 1796 Harrison Gray Otis House in Boston.

For this special installation focusing on the wallpaper, we have removed the furnishings and invite you to come inside, sit down, and explore the multitude of lively scenes of a Chinese New Year festival in a noble family’s garden.

Read the ArtStory about the MacFarlane Memorial Room wallpaper.

Generous support provided by the MacFarlane Memorial Room Fund of the Minneapolis Foundation. When visiting the museum’s American period rooms, Minneapolis-based photographer Anthony Marchetti became interested in the artifice of these spaces, and especially the stories of how each room was disassembled, moved then reassembled in the museum. After months of research in Mia’s curatorial archives and extensive research trips, Marchetti will present a new series of photographs that meditate on the displacement of these once functional living spaces that incorporates the individual period rooms and their original locations. The sounds of birds, crickets, and a rare 17th century zither fill the Studio. Items for keeping crickets and songbirds—cages, feeding dishes, and ticklers—are presented with mounted illustrations of favorite birds. Mend with me was a series of participatory sock darning lessons led by artist Emmett Ramstad in four distinct period rooms during the month of February in conjunction with his MAEP exhibition. This free lesson taught participants how to mend holes in socks while having conversations about labor, globalization, and care inspired by the specific period room in which the lesson took place.

2015 – Candlelight tour of the Period Rooms

Mia offered a special “candlelight” tour of the period rooms in conjunction with the Living Rooms project. Curators took a limited number of people through the rooms after the museum had closed and the modern lighting had been turned off, illuminating the history and context of these beloved museum installations as they originally existed. Check out the video of this exciting tour! At an airing, items are removed from their usual storage location and exposed to fresh air in a relatively relaxed manner. Airings in Japan can be dated back to the 8th and 9th centuries when records speak of them in connection with imperial and religious collections. They have since become a standard practice for Buddhist temples and Shinto shrines as a means to preserve the collections of paintings and books accumulated by such institutions. These airings are commonly referred to as mushiboshi (drying out insects) or mushibarai (driving out insects), indicating their practical function. Depending on the size of collection, airings were held annually or semi-annually and eventually became an important event for the general public as they provided them an opportunity to see otherwise locked away precious artworks. Kyoto’s early modern pilgrims and tourists could consult guidebooks that listed the days specific temples held their airings. The airings at Kyoto’s Daitoku Temple, for example, were held in the 6th and 7th months but are now held in early October. On view in the Queen Anne Room is an 18th century textile that was made in India for the English market by traditional artisans skilled in making colorful cotton cloth, or “chintz.” Soon after European export companies were established in India in the 1600s, chintzes found their way into elite homes as curtains, bed coverings, and eventually clothing, transforming European taste and material culture. Come see this intricately dyed cloth in its 18th century English “home away from home.” In the pastel at left, the Comtesse d’Yanville has gathered her children in an elite French home dressed top to bottom in Chinese textiles. The wall coverings feature several motifs common to Chinese imperial cloths: the dragon’s eyes to the right of the Comtesse; the dragon’s claw above the stylized waves in the upper left corner; the shou medallion at the top, symbolizing long life. These images also appear in the fine Chinese tapestry panel displayed here.

When this family portrait was created, the French were claiming parts of China and Vietnam, challenging the Chinese imperial authority signified by the dragon. In fact, the home’s chinoiserie interior isn’t merely fashionable—it may be regarded as a private expression of approval for French imperialism in Asia. Interior decorating was largely the domain of female heads of household, and the Comtesse’s choices suggest one way that homemakers—far from military and diplomatic battlefronts—contributed to empire building.

This pairing was a part of an initiative to demonstrate the effects of globalization. The wallpaper in the MacFarlane room also demonstrate a fascination with goods from China. Both the wallpaper and the textiles represented in the drawing reflect Chinoiserie interior schemes from different periods and locations and reinforces the prevalence of this trend. The Prairie School-style Purcell-Cutts House was decorated for the holidays to reflect the upper-middle-class, “progressive” lifestyle of the Purcells around 1915. Forty-five minute tours led by costumed docents emphasized the gifts, toys, food and social traditions of the period that the Purcells might have enjoyed. For example, many people had begun to reject Victorian knickknacks in favor of useful gifts that reflected modern aesthetic values of simplicity and function. Decorations included a Christmas tree decorated mainly with handmade paper ornaments, some in the Japanese style. The house display also featured several still and mechanical banks of the period from Mia’s Katherine Kierland Herberger Collection. Mark Dion’s “Curator’s Office,” created for More Real, was reinstalled as a permanent collection object. Read more to explore the installation and other materials related to the installation of this unique “period” room. In the setting of the Mia’s historic Wu Family Reception Hall, Wei Wei’s marble chair took its place alongside antique chairs. The marble chair is a poignant symbol of the continuities and disruptions of cultural tradition that permeate China today. The solemnity of the object, and its ability to evoke all that has been lost in China’s rush to modernize, make it a powerful memorial to the past.

2010/2011 – Colonial Legacy in the French Salon: Yinka Shonibare MBE in the Grand Salon At first glance this fancy gown seems right at home in a dazzling Parisian salon. A closer look will reveal that the dress is made not of French silk but of printed cotton, produced in Europe for the West African market. The artist uses this type of Dutch wax-resist dyed fabric, inspired by Indonesian batiks, to suggest the complex web of trade and exploitation that enabled Europeans to control most of the world’s riches for centuries. Yinka Shonibare’s Dressing Down, in fact, is an alluring critique of colonialism. Its placement in the Grand Salon from the Hôtel Gaillard de La Bouëxière (c. 1735) raises the question, “Whose resources and labor made this luxury possible?” 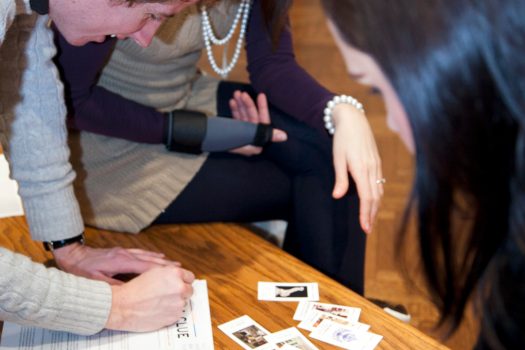 Mia CLUE, the intriguing game of whodunit set in the period rooms, was created for Mia’s Third Thursday series. Download the instructions and pieces to create a game pack, assemble up to five players (including yourself), and head to the third floor to play!

Download the instructions and pieces to recreate the game!